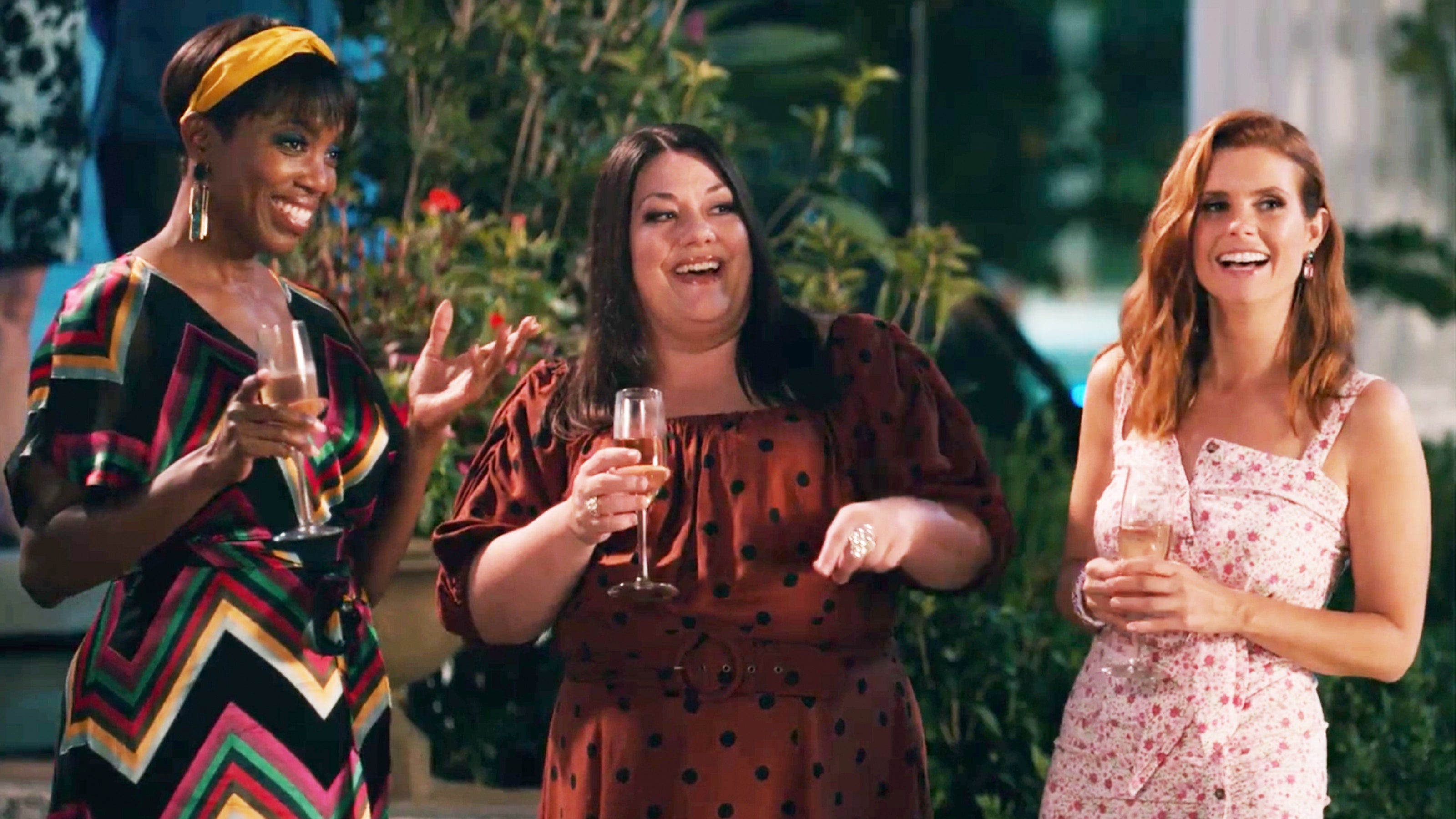 Developed for the screen by Sheryl J. Anderson, ‘Sweet Magnolias’ is a heartwarming romantic drama TV series based on the eponymous novels by Sherryl Woods. The Netflix show follows the lives of three childhood friends — Maddie, Dana Sue, and Helen, aka the “sweet magnolias” — in the idyllic South Carolina town of Serenity. Despite the various struggles and challenges that life throws at them and their families, the trio navigates each one beautifully while laughing and crying along with each other.

Fans don’t just adore the dynamic trio, but they also love their sizzling chemistry with their love interests as well as the beautiful portrayal of community, family dynamics, and friendship in the series. Season 1 depicts how Maddie finally breaks free from her toxic marriage to Bill and begins to pursue a romance with Coach Cal. Moreover, Ronnie’s return shakes up Dana Sue’s life and household while Helen’s plans of motherhood are taken by surprise due to Ryan’s arrival.

On the other hand, Kyle, Tyler, CeCe, and Annie’s increasingly complicated equation results in a life-threatening incident that leaves their fates hanging. The second season answers all the questions that arose at the end of its predecessor along with bringing up a few mysteries of its own. In case you wish to find out more about the events of ‘Sweet Magnolias’ season 2, we’ve got you covered. SPOILERS AHEAD.

Season 2 of ‘Sweet Magnolias‘ commences with the revelation that Kyle and Nellie have survived the car crash with severe injuries, and Tyler and Annie are unharmed. Though Maddie, Helen, and Dana Sue are relieved, their worries escalate when Tyler gets into an altercation with Jackson and fractures his arm. The aftermath of the accident strains the friendship between Tyler, Kyle, and Annie, who struggle to face each other due to their guilt. Helen decides to help a dejected Isaac search for his biological parents and the two face several hiccups in the process.

Moreover, Helen’s budding romance with Ryan also gets damaged when he tells her that he doesn’t want children. They have a painful breakup and Ryan leaves Serenity. She soon realizes that she is pregnant with his child and is ecstatic that her dream of motherhood is finally materializing. However, Helen tragically suffers a miscarriage, and Erik steps up to support her as she grieves.

On the other hand, Maddie reconciles with Cal but they have a hard time managing Kyle and Tyler, who are gravely disturbed due to the accident. While Tyler’s future in baseball is affected due to his injury, Kyle is ridden with unresolved anger and guilt.

Meanwhile, Dana Sue finds herself caught between the affections of Jeremy and Ronnie. She eventually lets go of the former and after much hesitation, decides to mend her marriage with Ronnie for Annie’s sake. Her massive fear of trusting Ronnie again stops her from forgiving him, but after several arguments, the couple decides to seek marriage counseling with Pastor June. Dana Sue eventually acknowledges her mistakes in the marriage as well and lovingly reconciles with Ronnie as she still loves him.

Annie is initially uncomfortable with her parents’ situation but gradually learns to accept it. She further finds unexpected solace in Jackson, who tries to become a better person in her company. When Jackson professes his love to Annie, she agrees to go out with him and they decide to be together despite their parents’ prohibitions.

Things don’t end so well with Tyler and CeCe, as they grow apart over the summer due to her busy schedule as well as him becoming socially withdrawn after injuring his arm. CeCe eventually breaks up with him as she feels that he is still not over Annie and that their relationship is beyond repair. Tyler is heartbroken due to his inability to play baseball but then decides to find different interests such as reading and music. He finally realizes that he pursued baseball only because Bill wanted him to and Tyler now wishes to explore his life on his own for once.

When Kyle begins to feel excessively suffocated, Noreen returns to Serenity to check upon him. He gradually begins returning to normal with her, Maddie’s, and Cal’s efforts. Later, Noreen decides to live with Isaac as his roommate temporarily. She apologizes to Maddie for all the pain she caused her and hopes to be cordial for the sake of their children. When Noreen gives birth to her daughter Rebecca, Maddie forgives her and the entire community makes her feel loved and accepted. She finally decides to stay back in Serenity and moves in permanently with Isaac.

In the meantime, Helen finds comfort in Erik during her dark times and they decide to give each other a chance at love. Cal decides to help Dana Sue by becoming her silent partner in the business, but his job as the baseball coach gets jeopardized when Mary Vaughn decides to blackmail him to ensure that Jackson gets special priority.

In addition, the Corner Spa faces a new problem when the town council decides to charge penalties for parking in commercial properties. Maddie however decides to probe further into the matter and finds out that Mary Vaughn and Trent are behind everything. She then rallies up the townsfolk about the mayor’s incompetency and they all successfully sign a petition for his removal from office. Mary Vaughn initially threatens Maddie with consequences and goes on to get Cal removed from his position at school by raking up his past.

Maddie thus begins to worry about Cal’s behavior, especially after confronting an aggressive fan from his baseball days. Soon the entire town receives a shock when their beloved Ms. Frances suddenly passes away. Tyler, Kyle, and Annie finally decide to put aside their differences and become friends again. As the Sweet Magnolias begin preparing for her memorial service, some new and old faces arrive in town and turn everything upside down.

Sweet Magnolias Season 2 Ending: Does Helen End Up with Erik or Ryan?

After Ryan and Helen have disagreements over starting a family together, he leaves town. Helen receives another loss when she realizes that she is pregnant with his baby but soon has a miscarriage. She thus grapples with grief and begins to feel hopeless in life but is saved from drowning by Dana Sue, Maddie, and Erik. She finds special solace in his company, as he goes to extra lengths to make her feel loved and cared for.

Erik surprises her with culinary treats and provides her with a safe space to be vulnerable, something which she is unable to be in front of Maddie and Dana Sue as she is the designated “strong one.” Moreover, when Erik shares his past with Helen, they both connect deeper over the loss of loved ones and the pain that follows. Erik lost his wife Vera due to a complicated miscarriage and the trauma led him to leave his job as an EMT.

Initially, Helen and he decide that they are better off being friends, but as time passes, they begin to pursue their feelings for each other. However, when Helen discusses her decision of having a child through IVF with him, they both agree upon taking time to heal before entering physical intimacy. Helen and Erik’s newfound bliss is threatened when Ryan returns to town after his aunt Ms. Frances’ death. He unexpectedly meets her and tells her that he has changed his mind about having kids and that he still loves her.

After the memorial party, Ryan proposes marriage to Helen, but she feels torn between him and her blossoming relationship with Erik. She is confused as even though Erik is the perfect supportive partner, Ryan is, after all her first love. She has dreamed all her life about marrying him and having children, and when he comes and shows her a chance at that, she is in a tough spot.

However, though Helen remains undecided as season 2 ends about whom she chooses, we think she might most likely say no to Ryan’s proposal as he has a history of repeatedly hurting her and not fighting for her. On the other hand, Erik provides her the stability she looks for to thrive independently and be herself. So she may just decide to stay with Erik and explore their relationship, without risking getting her heart broken by Ryan again.

Who are Isaac’s Biological Parents?

Helen and Isaac begin searching for his biological parents after he discloses that his birth mother belongs to Serenity and she left him with a Bible. Born in Gulfport, Mississippi, Isaac was adopted and lovingly raised by Eno and Tina. Unable to find any official records, Helen and Isaac resort to using the highlighted passages in his mother’s Bible to find clues about his parents. In a shocking turn of events, Isaac’s mother is revealed to be Peggy Martin, the editor of the local newspaper.

Peggy is initially hesitant to speak to Isaac but gradually connects with him. She further divulges that his father is Bill Townsend, much to Isaac and Maddie’s dismay. Bill and Peggy had a brief affair in high school during a Model UN trip to Raleigh. Their mothers hid the pregnancy from Bill and made a 16-year-old Peggy secretly give the baby away. Isaac is relieved to find his parents but has difficulties adapting to the truth.

Read More: Do Cal and Maddie End Up Together in Sweet Magnolia Season 2?