The True Story Behind ‘The Texas Chainsaw Massacre’, Explained

Tobe Hopper’s 1974 classic, ‘The Texas Chainsaw Massacre‘, not only defined slasher horror, it also created horror tropes that are being used till date. It had such a lasting impact that it is still influencing horror, even after its 45 years. The movie was made on a really low-budget and managed to set the record for the highest-grossing indie horror film ever made, which of course got crushed later. But it is one of the most horrifying, gruesome, provocative, groundbreaking trend-setter of a horror film ever made. The movie introduced the world to the iconic “Leatherface“, that even after almost half a century of his creation is still finding ways to come back to us through the numerous sequels and reboots the original has had over the years.

‘The Texas Chainsaw Massacre‘ franchise, with all its different narratives, revolves around the terrifying serial killer, Leatherface a.k.a Jed Sawyer, and his psychotic family of slaughterhouse workers in Texas, as they kill and feed on the unsuspecting visitors who usually stumble upon their house on their way to someplace else.

Leatherface gets his name because of the masks he wears which are made up of the skin of the people he kills with his chainsaw. He is a big, mute man, who Hopper almost created in the manner of an anti-hero. According to Hopper, Leatherface is a “big baby” who is controlled by his family, and kills because he feels threatened. He also wears different skin masks to express himself, which he cannot otherwise.

Leatherface is one of the biggest horror icons, and one of the most different ones too, as he isn’t a supernatural entity like most others, but more importantly, it is because he is petrifying, but also oddly humane, someone you cannot just dismiss as a monster because of his traumatic childhood. When the 1974 slasher classic was first released it was marketed to be based on a true story. Whether or not it was based on one is often debated. But it was definitely inspired by a bunch of very real stories, and a very real serial killer. Here’s everything we know about it.

Is ‘The Texas Chainsaw Massacre’ a True Story? 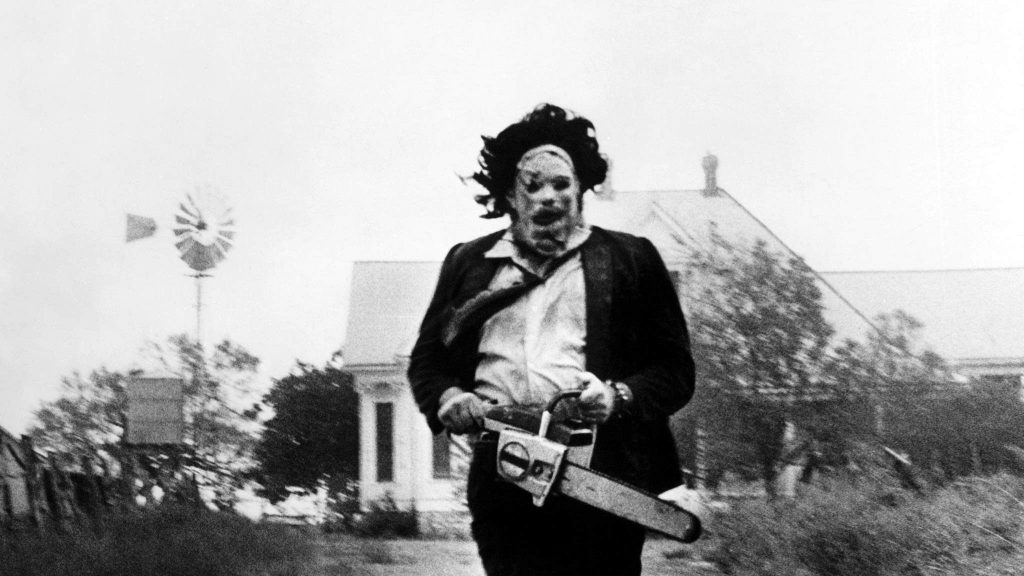 Leatherface, with his skin mask and his chainsaw, chasing after innocent wanderers on road-trips to devour them seems like the stuff every traveler’s worst nightmare is made up of. But he was actually inspired by Ed Gein, also known as the Butcher of Plainfield. He wasn’t a cannibal, neither did he use a chainsaw, but he was a murderer who made skin masks and wore them, along with, lets just say, other things.  Gein had a lasting effect on American pop culture as he was not only the inspiration behind Leatherface, but also Norman Bates in ‘Psycho’, as well as Buffalo Bill in ‘The Silence of the Lambs‘.

Who Was Ed Gein?

Ed Gein was a murderer and a body-snatcher from Plainfield, Wisconsin, who gained popularity in America around the late 50s and 60s for the notorious crimes he committed. Interestingly, he was not a serial killer as he actually only murdered two women, but the reasons for his murders and exhuming bodies from graves is what shook everyone.

Just like the characters that were based on him like Leatherface and Norman Bates, Gein had a complex and troubled relationship with his dominating mother who he was devoted to.  Her death really shook him and he was absolutely devastated. Though he had previously also lost his father and brother (some suspect Ed of his brother’s murder), no other death bothered him as much. According to Harold Schechter who wrote Deviant, Gein’s biography, he had “lost his only friend and one true love. And he was absolutely alone in the world.” He could never really get over it.

Instead, he started exhuming bodies of dead middle-aged women who looked liked his mother and mutilated them to make a body suit of their skin, along with skin masks. He was in process of creating a “woman suit” so that “…he could become his mother – to literally crawl into her skin.”!! Now didn’t that escalate quickly? Gein also had a history of wearing women’s clothing similar to Leatherface and Bates.

Gein murdered both of his victim, two middle-aged women, by shooting them, unlike Leatherface and his chainsaw. But much like Leatherface, he did store their bodies, along with the other bodies he exhumed, and made masks, suits, and even furniture out of them, like Leatherface’s family does.

When one of Gein’s victims went missing, his house was searched. Just like Leatherface and his family, Gein lived in a peaceful looking house on a farm. But what was found in the police search turned Gein’s peaceful looking home into a true house of terror. The police found skulls, masks, leggings, corsets made from human skin, a belt made from nipples, lampshade, bowls and wastebasket made of human skin, a chair upholstered with human skin, along with several other things that I would rather not write about. But, well, now we know what inspired the customized D.I.Y. home decor of Leatherface’s family. 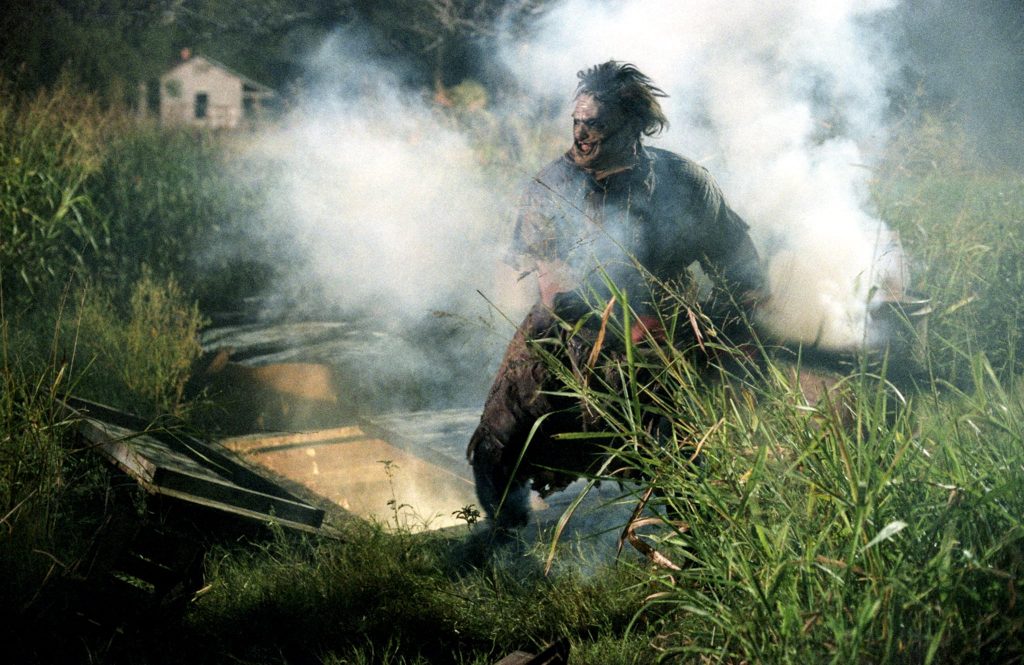 Another serial killer was an inspiration for the team when they were creating Leatherface’s character. Kim Henkel, co-writer of ‘The Texas Chainsaw Massacre’ spoke of how though he studied Gein and was primarily inspired by him, there was also another murderer that caught his eyes, a teenaged serial killer, Elmer Wayne Henley from Texas, that also influenced writing Leatherface as an almost anti-hero:

“He was a young man who recruited victims for an older homosexual man. I saw some news report where Elmer Wayne…said, ‘I did these crimes, and I’m gonna stand up and take it like a man.’ Well, that struck me as interesting, that he had this conventional morality at that point. He wanted it known that, now that he was caught, he would do the right thing. So this kind of moral schizophrenia is something I tried to build into the characters.”

Hopper, in an interview with Texas Monthly also revealed that Leatherface was actually inspired by a real person, though there would be no way to prove it:

“The idea actually came from a doctor I knew. I remembered that he’d once told me this story about how, when he was a pre-med student, the class was studying cadavers. And he went into the morgue and skinned a cadaver and made a mask for Halloween. We decided Leatherface would have a different human-skin mask to fit each of his moods.”

Hopper’s ‘The Texas Chainsaw Massacre’ was also inspired a bunch of real-life incidents. One of which, funnily, happened during the Christmas shopping rush of 1972 which had Hopper frustrated with the crowd. Until his eyes fell on the saws on display and he thought to himself, “I know a way I could get through this crowd this quickly”. I could call this an unhealthy thought but well, I would be lying if I did. All all of us have felt that crazy during Holiday shopping.

Once he was home, Hopper thought about the saws again and the entire story just came to him. Another one of his influences was Hansel and Gretel, and he wanted to a morbid, absolutely terrifying retelling of the narrative where a bunch of people stumbles upon a house and basically all end up and dead inside the tummy of the witch, which in our case is Leatherface and his family.  Interestingly, Hopper also mentioned how the movie was an allegory of the Vietnam War, and through it he could comment on the political environment of the time as well as the violent future he thought was ahead of him.

‘The Texas Chainsaw Massacre’ remains one of the most influential horror movies of all times, and the movie, that in many ways defined horror, paving way for the future of horror films. Its use of realism with its cinematography and props (the saw was real!!!), and focusing on crafting an antagonist with such intricate details by basing it on numerous real-life terrifying people, is what makes the movie the masterpiece it is. It has had over seven remakes and sequels, and they are some more on their way too.