The Book of Eli Ending, Explained

Directed by Albert and Allen Hughes, ‘The Book of Eli’ is a post-apocalyptic neo-western movie. It follows Eli, a traveler in a post-apocalyptic world who sets out to deliver a mysterious book to an unknown location in the West. Guided and protected by a voice in his head, Eli encounters and overcomes several obstacles including the tyrannical warlord Carnegie, who is after the book Eli possesses. As Eli continues on his difficult journey, the purpose of the book and his mission come to light.

The movie beautifully examines the power of faith as well as the eternal conflict between righteousness and sin. As the movie reaches its conclusion, the audience is left to ponder over the fruit of Carnegie’s desires and the fate of Eli’s mission. If you too are curious to find out what happens in the ending of ‘The Book of Eli,’ here’s everything we can tell you about it. SPOILERS AHEAD.

The Book of Eli Plot Synopsis

Set in a post-apocalyptic world 30 years from the present, ‘The Book of Eli’ depicts the titular character, a mysterious nomad traveling on foot to the West. Searching for water, he arrives at a dilapidated town run by warlord Carnegie and his henchmen. The oppressive Carnegie discovers that Eli possesses a book which he has been desperately searching for a long time and asks him to hand it over. When Eli refuses, the former’s goons try to kill him but he remains unharmed.

While Carnegie sustains a gunshot wound in his leg, Solara, the daughter of his mistress Claudia, decides to accompany Eli. Initially reluctant towards Solara, Eli ends up saving her from being assaulted by bandits and they continue their journey ahead. He then tells her about how he has been assigned the task of delivering the book to a safe place by a divine voice that guides him.

Unfortunately, Carnegie ambushes them and takes the book away, but Solara manages to escape and helps Eli carry on. Solara and Eli arrive at Alcatraz Island, where they discover a hidden group of people who aim at preserving literary and musical works. In the end, the secret of Eli’s book is disclosed, along with a shocking revelation about his abilities. On the other hand, Carnegie must face the consequences of his obsession and wrongdoings.

The Book of Eli Ending: Is Eli Dead?

Eli was instructed by a divine voice after the war to find the book and deliver it safely to the right place in the West. Thus, it has become his life’s purpose to guard the book and look for the place where it was supposed to be. From the beginning, he is shown to be an extremely capable man with excellent survival and combat skills. He reads the book every night and hesitates to disclose much about it to anyone.

When Carnegie asks him to hand over the book, Eli refuses and successfully defeats his henchmen without getting even a single scratch on himself. Later on, Eli confides in Solara about his mission and states that the book saves him from all harm till he delivers it to its destination. However, when Carnegie traps them and threatens to shoot Solara, Eli finally gives up the book in return for her life. The loss of the book leaves Eli unprotected, and he is shot and left to die by Carnegie.

Solara manages to escape and come back for Eli and when she asks him why he gave away the book, he states that the book itself teaches the importance of helping others and he just complied with that. Solara and an injured Eli finally reach the ocean and row to Alcatraz Island, where they meet a group of strangers who run a sanctuary for preserving music and literature. Eli tells the leader Lombardi that the book he possesses is the New King James Version of the Bible. He further dictates the entire book word by word from his memory, so that it can be handwritten and stored.

After the manuscript is completed, Lombardi prints Eli’s recited Bible in his printing press and places it safely in his library. As the Bible gets a new lease of life and reaches its right place, Eli feels that his life’s purpose is fulfilled and takes his last breath peacefully. He is laid to rest in the sanctuary premises, and Lombardi states that humanity shall be eternally grateful to Eli for his efforts to restore divine faith. 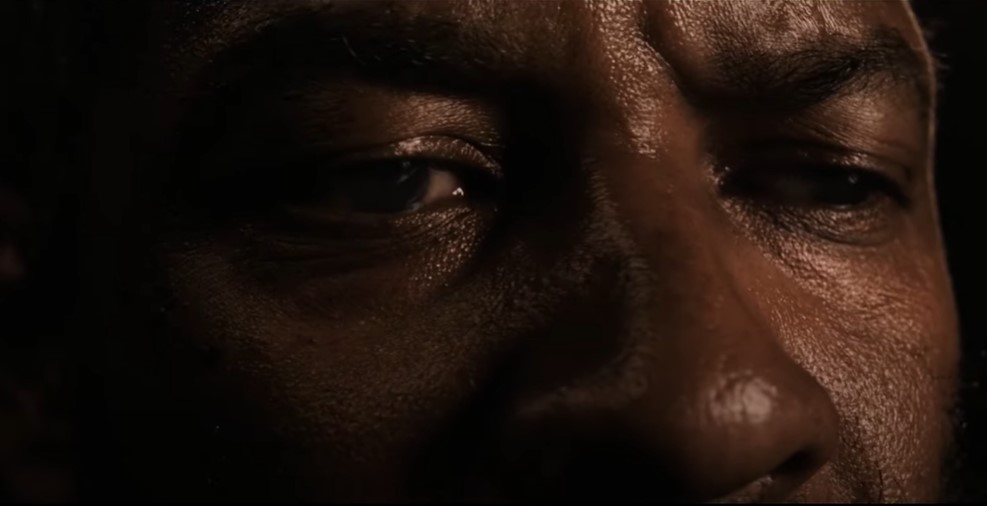 When Carnegie opens the original Bible he took from Eli, it is revealed to be written in Braille. This indicates that Eli is a person with blindness, as he reads the book daily. On the other hand, Eli arrives at Alcatraz and begins dictating the Bible to Lombardi from his memory. As he recalls each word correctly, a closer look at his eyes reveals that he is indeed visually impaired. It is impossible to tell Eli’s blindness till this very moment, as he miraculously survives each danger that befalls him and has highly sharpened senses. Thus, it is likely that though Eli physically doesn’t possess the power of sight, he sees with the vision of divine faith and the determination to complete his mission.

Is Carnegie Dead or Alive?

Carnegie is the only literate man in town and uses his knowledge to control resources and rule the town. He seeks the Bible possessed by Eli desperately, as he wishes to use the words of wisdom in it as guidance to expand the town. In reality, he wants to manipulate people in the name of faith, as it instills a sense of hope in humans. When Eli refuses to give him the book, he is ready to go to any length to obtain it.

Carnegie sacrifices a lot of his trusted henchmen in his mad conquest but is finally able to get the book after shooting Eli. When he returns to town, he finds the book is sealed shut with a lock. Carnegie gets the lock broken and feels triumphant at finally being able to access the Bible’s contents. To his dismay, Eli’s Bible is in Braille and he is unable to decipher it. As Claudia is also a person with blindness, Carnegie forces her to read it for him.

Claudia calmly states that she has forgotten how to read and tells him that the lack of enforcers in the town has caused the citizens to overthrow Carnegie’s rule. She taunts him that despite having attained the Bible, it is of no use to him as he can’t read it. She further says that the infected wound in his leg has rendered him powerless and that he has lost everything despite having gained what he desired the most. Carnegie realizes the consequences of his misdeeds and obsession and resigns to his impending end.

What Caused The Apocalypse?

‘The Book of Eli’ is set in a dystopian world hit 30 years ago by an apocalyptic event referred to as “the flash.” The entire world has turned into a wasteland where survivors loot and hunt to survive. Even basic resources like food and water are scarce, and people like Carnegie exploit the desperation of people.

When Solara asks Eli about his experience of the apocalypse, he tells her that a nuclear war was caused due to religious faith. The war ended when a hole tore the sky and the entire world was burnt to the ground due to a solar flare. The flare resulted in a blinding light — aka the flash — and several people, including Eli, were blinded. Post the war, people began burning the Bible out of fear and thus the world entered a desolate and faithless phase, where only the fittest can survive.

Read More: What is the Meaning of The Book of Eli Title?