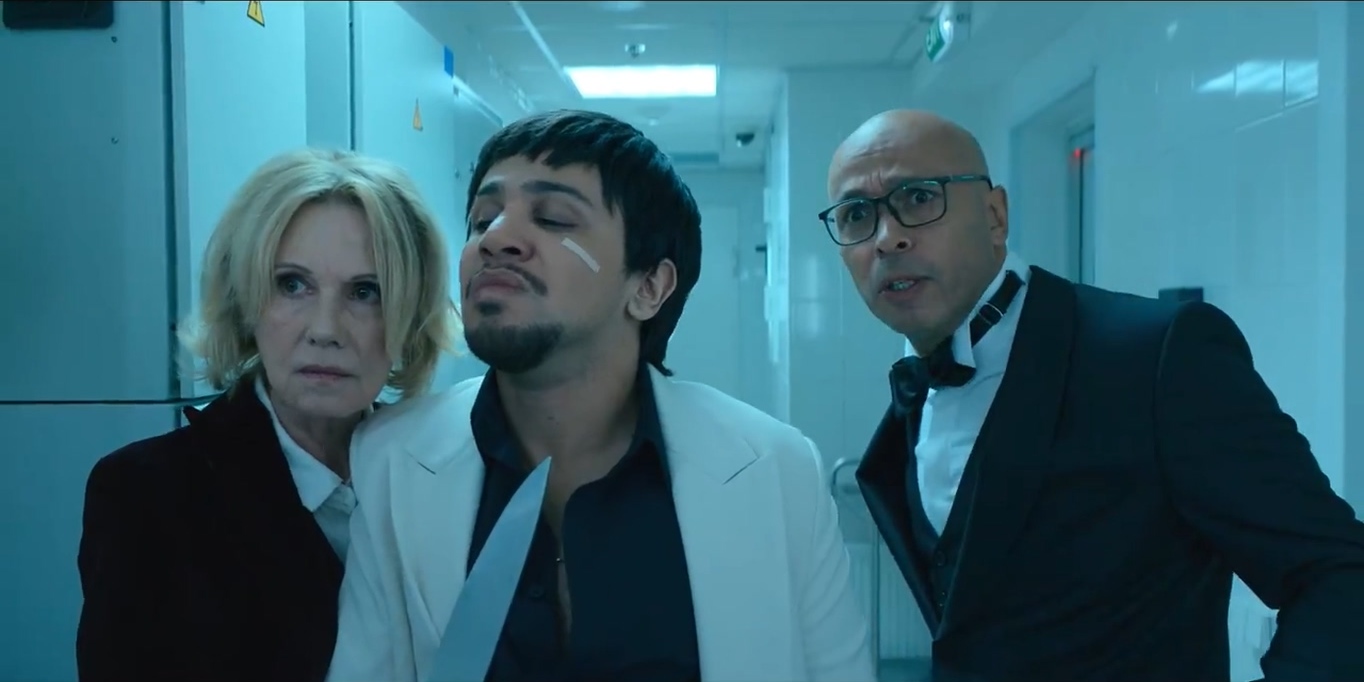 Some things never get old, like Jean-Claude Van Damme kicking around bad guys and dropping one-liners in the middle of gruesome action. Helmed by David Charhon, ‘The Last Mercenary’ is a sumptuously hilarious French-original action-comedy movie that packs plenty of punches (comical and otherwise). The story follows a larger-than-life agent, the Mist, who went underground after a covert mission went awry, only to resurface when the life of his son is in danger.

The story is complete with an international conspiracy, an all-powerful piece of machinery, a wannabe “Tony Montana” gangster, and a few corrupt agents. After twists and turns and a few broken legs, the fast-paced adventure comes to a close. But if the high-voltage action deviates you from the story, some aspects may require further explanation. But fret not, since we have you covered. SPOILERS AHEAD.

The story’s hero is Archibald Al Mahmoud, a meek and naïve teenager who lives with loving stepfather Fernand and occasionally buys pot from his friend Momo. Momo has a sister in Dalila, and we meet her later in the story, but let us not get ahead of ourselves. In the prologue, a ‘Scarface’ fanatic is chased by a hoard of police cars, but the police are compelled to let him go since he apparently has immunity. He claims to be Archibald Al Mahmoud, but we know later that he is Simyon, the spoilt son of the king of fictional country Taarghistan. His purpose of the visit is to procure a machine called the “Big Mac,” and he is in contact with dirty agent Paul. 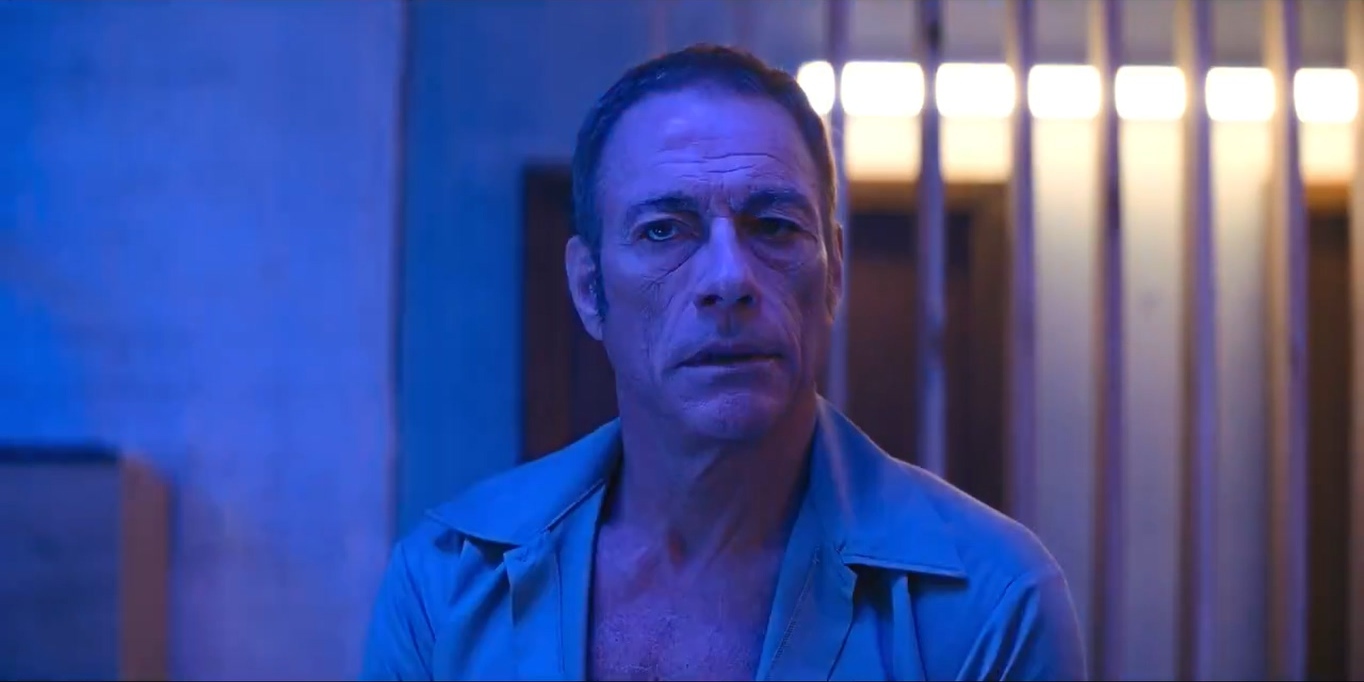 The real Archibald comes back to Fernand after a shady deal with Momo. But he is in for a shock when two secret agents (not that secret) raid his residence. Fernand dies, and Archie freaks out. The government wants to revoke the immunity of Archibald, but meanwhile, his legendary father, Richard Brumere, descends on the scene. As the story goes, the government failed to protect Richard in a covert operation named Cup-and-Ball, leaving him stranded in a faraway land.

To save the face of the government, Richard disappeared, while the mother of Archibald, Farah, got lifetime immunity for Archibald. This gets us to the present moment of discontent when Richard chooses to be a dutiful father and protect his son. He teams up with Dalila, Momo, Archibald, government official Alexandre, and his old acquaintance Marguerite. The father and son have a few bonding moments while they tackle Simyon, but we soon realize more stakeholders are in the equation.

The Last Mercenary Ending: Do Richard and Archie Overcome Their Differences?

Richard saves his son from the rogue secret agents, but he is outraged when he learns that Archie cannot drive a car. Richard chooses to conceal his real identity to Archie and introduces himself as George. On the other hand, Archie is resentful of his father, who has disappeared on him. Richard tries to make his case by reminding Archie of his generous allowances, but Archie takes his privilege for granted and dismisses his father’s role in it.

For Archie, Fernand is the real father figure, and he is shell-shocked after the death of Fernand. It seems that both the characters have their flaws, but who does not? However, the father and son come closer when they show their real selves to each other, with some guidance from Richard’s anxious friend Alexandre Lazare. Lazare drops the bomb, concealing the real identity of Richard. Archibald is infuriated, and Momo agrees. 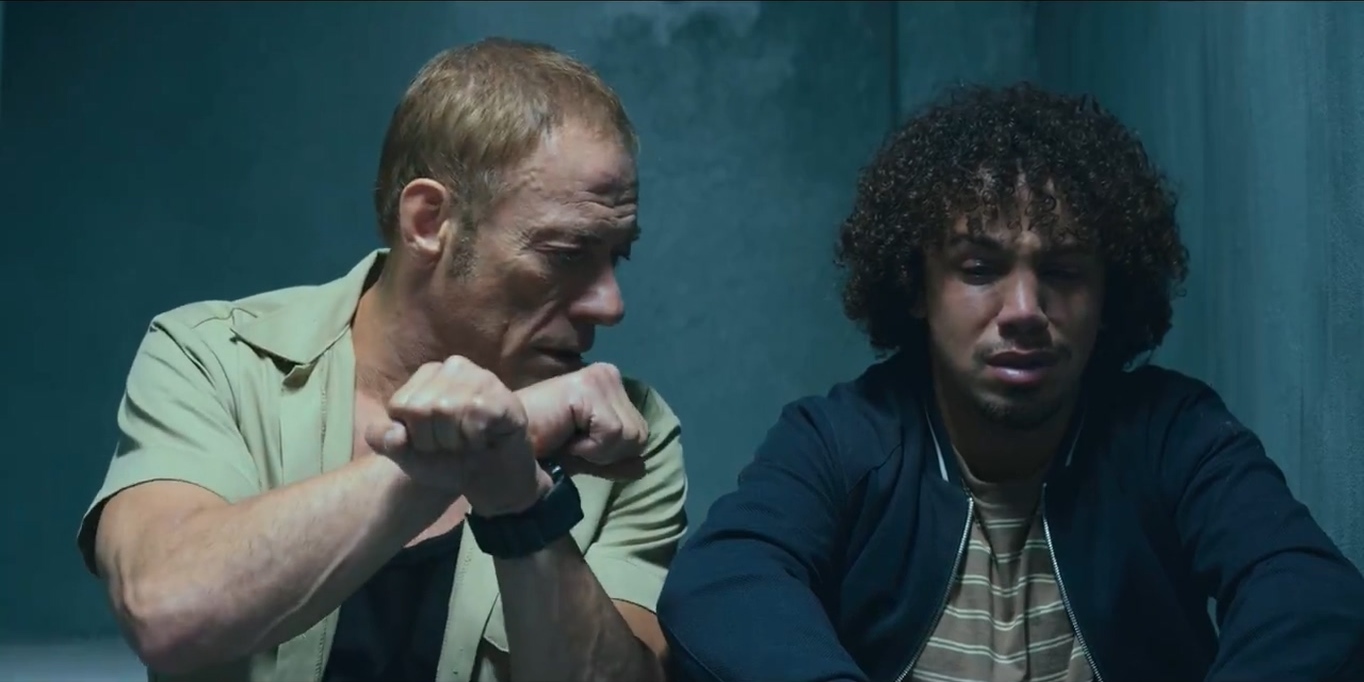 Dalila is somewhat enamored by Richard’s staggering personality, and she tries to bring the father and the son to a middle ground. When Archibald complains about Richard being a disgraceful father, Richard points out the flaws in Archie’s character. Archie, we know, is nothing like his father. In contrast to his father’s ‘James Bond’ persona, Archie is quite a laid-back goofball who wants none of the action. But he attempts to prove his worth to Richard, and in the end, reveals redeeming qualities behind his slacking appearance.

Archie’s actions are not always well-thought, and he ends up ruining Richard’s cover on a few occasions, despite his best intentions. But Richard also comes to understand his duties as a father, and a frank father-son conversation lifts the tension. When, at the end of the movie, Richard claims to have fine teammates in Archie and his friends, we sense that the father and the son finally overcome their differences.

Is Jouard Dead or Alive? Are Paul and Marguerite Caught?

Fernand is killed in a sudden encounter early in the plot. While we see that two people carry out the mission of eliminating Fernand, we don’t get to know the identity of the person who initiated the mission. Richard initially thinks Alexandre to be the perpetrator, but the audience knows that Alexandre cannot be the one. Although, he tries to access the secret file of Archie, which sparks off the mission. Some aspects get lost in the comedy of errors, and we cannot identify the central villainy until the end of the story. Alexandre seems to work under his controlling subordinate, Paul, and we also know that Paul is the official contact of Simyon. Paul comes off as a corrupt officer, but he must work under someone. 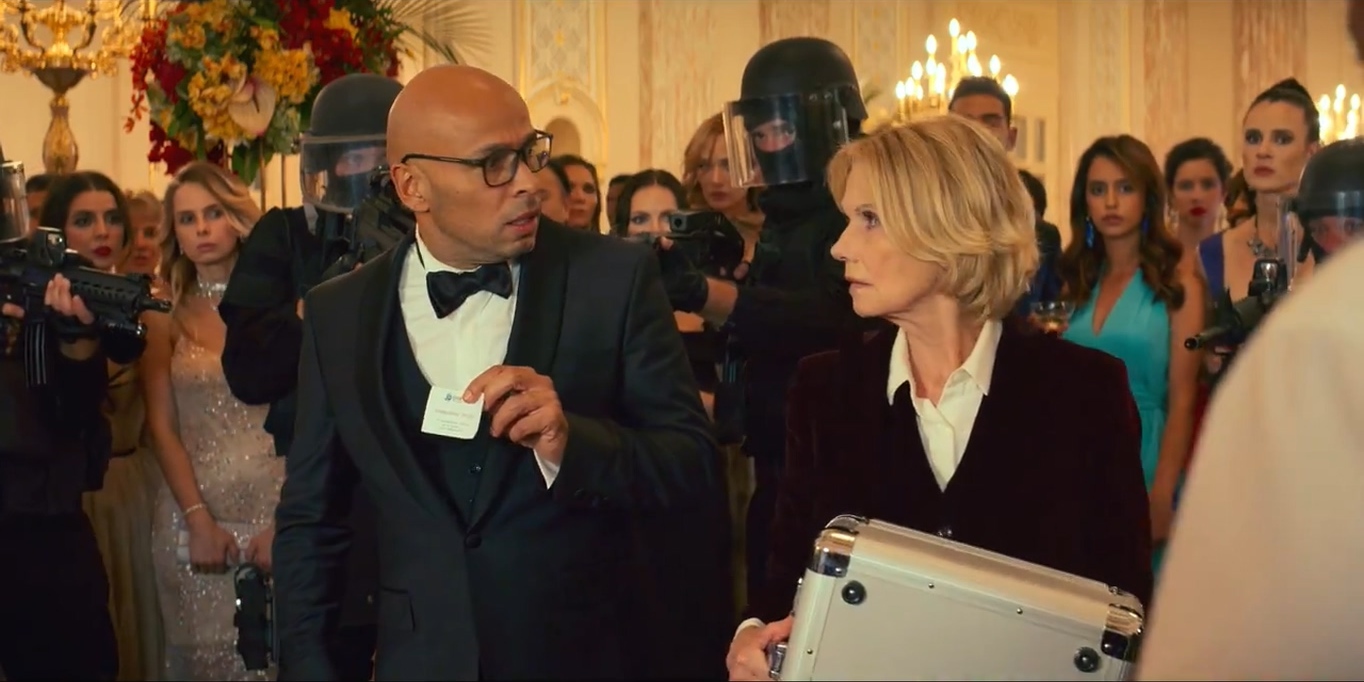 The ending of the story reveals the real boss of Paul, who turns out to be Richard’s trusted associate Marguerite. Moreover, we get to know that Paul is actually the son of Marguerite. They flee with the machine and the money, but when Paul addresses Marguerite as his mother, their covers are blown. She admits to assailing Fernand. Commander Jouard enters the scene quite late, hoping to conduct unfinished business with Richard.

Despite being a fan of his work, Jouard is furious with Richard since the latter slept with the former’s wife. But then he identifies Marguerite, who shoots him in the chest shortly after. But he is alive, thanks to a bulletproof vest made in France. In the nick of time, he reaches the climactic scene and orders his team to arrest Marguerite and Paul. The mother-son duo is arrested, while Richard makes a vigilante escape with the help of “Big Mac.”

Simyon is a fun character homage to Al Pacino’s Tony Montana in ‘Scarface.’ He may not be the brightest of minds, but his eruptive persona still adds some zing to the movie. Most people would say that the screenplay for ‘Scarface’ is written by Oliver Stone, including Paul. Still, Simyon believes that the screenplay is written by none other than Tony Montana himself. He is the son of the king of the fictional country Taarghistan. He is not allowed to enter France and thus takes the name of Archibald to make things easier. He wants to get his hands on the machine “Big Mac” but is forced to give up on his mission upon a visit by Richard. 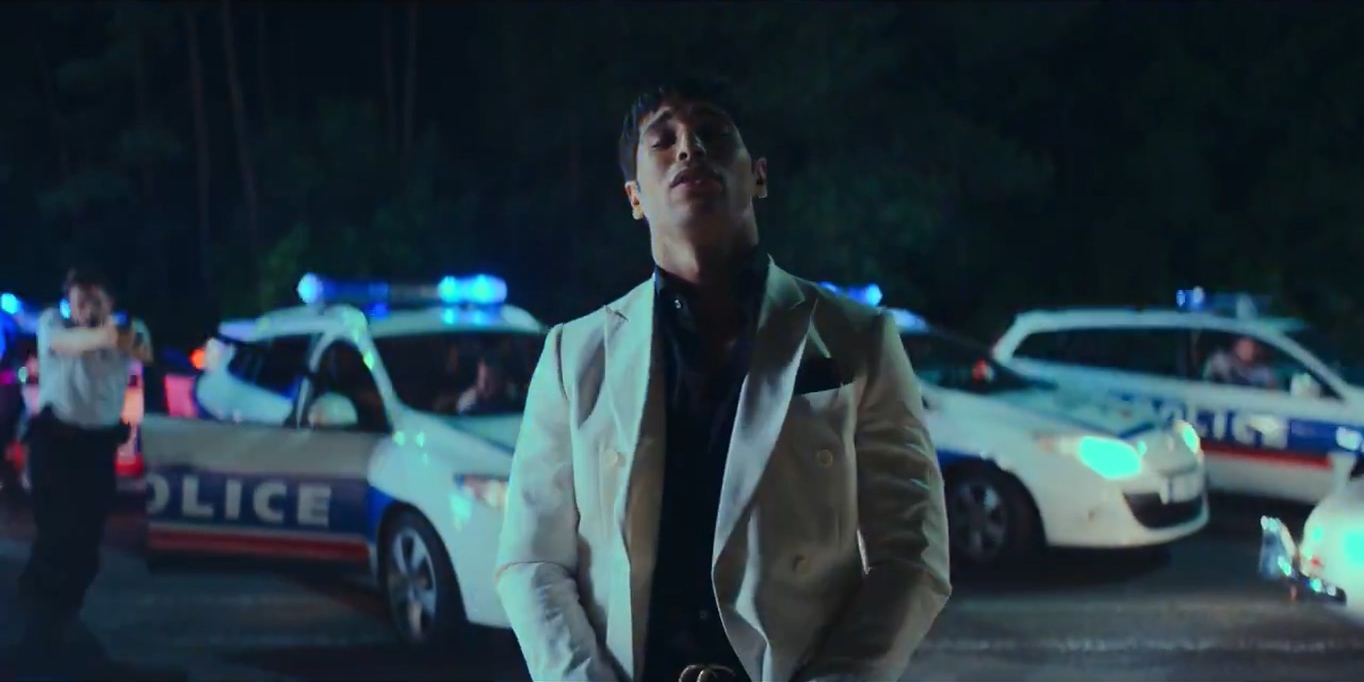 Simyon goes swimming in a pool, and Richard follows him under disguise. He retires to the washroom to brush up on his bathroom singing skills, and most of the action in this sequence takes place with him in the bathroom. He makes a late entry, hoping to unveil chaos, but Archie takes care of him with a blow to the head. But Simyon seems to disappear into thin air while, in an amusing turn of fate, Archie takes up the disguise of Simyon. But where does Simyon go, one may wonder. Apparently, he gets a call from his father and gets back to his own country.