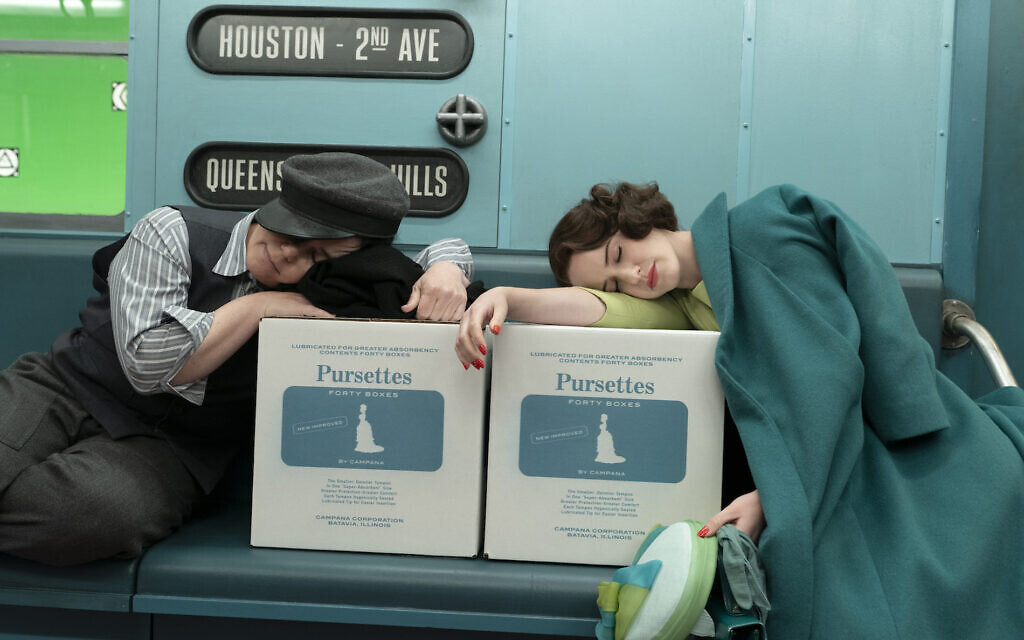 The latest season of ‘The Marvelous Mrs. Maisel’, as I have previously discussed, is also its most socially aware season. Its brilliance lies in its character-driven narratives, and with the seventh episode, we see our characters continuing to evolve. One thing I have noticed about this season is that most of its episodes end up having a primary theme, from changing times, to life being a gamble, to having the blues. With the seventh episode, very aptly titled, “Marvelous Radio”, it’s about raising your voice. But, in a lot of ways, the episode is also about closures as we slowly approach the season finale.

The seventh episode of the latest season of ‘The Marvelous Mrs. Maisel’ begins with our favourite girls, Midge and Susie, back in New York and hustling for work. Turns out, it has been two months since Baldwin put his tour on hold, and the girls are back in the city, looking for temporary work in the meantime. They book numerous voice gigs for radio ads, ranging from cigarettes for pregnant women to tampons, to cars, to even mortuary services with morbidly hilarious taglines like “Rest in Pete’s”. Your girl sells them all. But they hardly get paid, and sometimes not at all. Instead, they are given cartons of pancake syrups and tampons.

We learn that Susie maybe developing a gambling problem, as she struggles to make ends meet financially. Susie also gets a call from Tess, informing her that their mother is being sent to the nursing home. While the men of the family fight over the ownership of the house. Things do seem slightly bleak for Susie, but she remains hopeful because of “Miss Julie”‘s Broadway premiere in sight, and all the work she put into it. She took something that others rejected and turned it into an opportunity. She knows she is the reason behind Sophie Lennon’s Broadway debut as a serious actress.

Meanwhile, the Weissmans are still struggling financially, and are forced to let their beloved Zelda go, at least temporarily. Abe pays a visit to Columbia and says his goodbyes to his boys, finally feeling a sense of closure.

The episode also finally also addresses the big elephant in the room. Benjamin!!

Rose runs into an old friend, Corinne, at a cafe she is a regular at. The two catch up and Rose’s excellent match-making skills are brought up, something she’s a natural at. She still feels guilty for setting Benjamin up with Midge, so, she decides to pay him a visit at the hospital. This, finally, gives us the closure we needed. Benjamin takes everything well, and tells her it wasn’t her fault at all. That though Midge was right for him, he wasn’t right for her. The Weissmans also look for a new apartment, and Midge pays a visit to her old home, and learns that its tenants will be leaving soon.

On the other hand, Abe receives a call from Asher after he reads the piece Abe wrote about him and his plays. After the conversation, Abe decides to get the piece published, and it immediately gets picked up by The New York Times, leaving him ecstatic and proud. So much so that he hands out the paper to his relatives during his grandson’s brit mila, excitedly chanting, “Words can change the world”.  With that, he also advises Midge to not do the live commercial for a right-wing extremist politician, and to use her voice wisely. On learning more about the politician and her policies, she backs out in the last minute, and sticks to her principles.

The episode reaches its climax with “Miss Julie’s” much awaited Broadway premiere, forming the key highlight of the episode. Susie and Midge reach the theatre to watch Sophie’s Broadway debut. But Sophie fumbles and stumbles early on in the play as she is nervous, leading her to she mess up her performance in a state of a panic. She ultimately reverts to her comic persona and steals the show with her humour, but ends up sabotaging the entire production.

Sophie literally runs away as Susie tries to catch hold of her. Feeling defensive, she puts the entire blame on Susie, telling her that it was her plan to destroy Sophie for Midge.  The is followed by a strong monologue by Susie where she tells Sophie that she is great actress and that she could have actually done it, but she didn’t have the guts. The episode ends with Susie standing up for Midge with her iconic dialogue, “She’s got guts. That is the difference between Midge Maisel and the great Sophie Lennon. You’re a star, for now. But she’s going to be a goddamn legend”.

“Voice” seems to be the primary theme of the seventh episode of the latest season of ‘The Marvelous Mrs. Maisel’. Both raising it, and being heard. The episode begins with Midge and Susie finding voice gigs for radio ads, only to eventually realize that having a voice comes with responsibility. The episode is all about raising a voice and sticking to one’s principles. Asher doesn’t grant Abe the permission to get his article published because he doesn’t want his old life resurrected. But Abe decides to anyway, as he believes that these things need to be heard, and because he finally has a chance to do something meaningful and necessary.

Similarly, Susie’s monologue at the end of the episode has her finally rising up to the bully that Sophie Lennon is. She’s fierce when it comes to protecting Midge and stands up for her and everything that she believes in. ‘The Marvelous Mrs. Maisel’, is in many ways, a celebration of female friendships. Midge and Susie’s relationship has been a constant highlight throughout the show as they always have each other’s backs, despite their differences. But with her monologue, Susie certainly takes it to another level.

The episode is definitely one of the strongest of this season, with outstanding performances by Jane Lynch as Sophie Lennon performing “Miss Julie”, and Alex Borstein as Susie with her intense monologue and cutthroat dry humour. As the season approaches its finale, the episode also wraps up some of its primary conflicts, and in many ways, serves as the climax point of the third season.