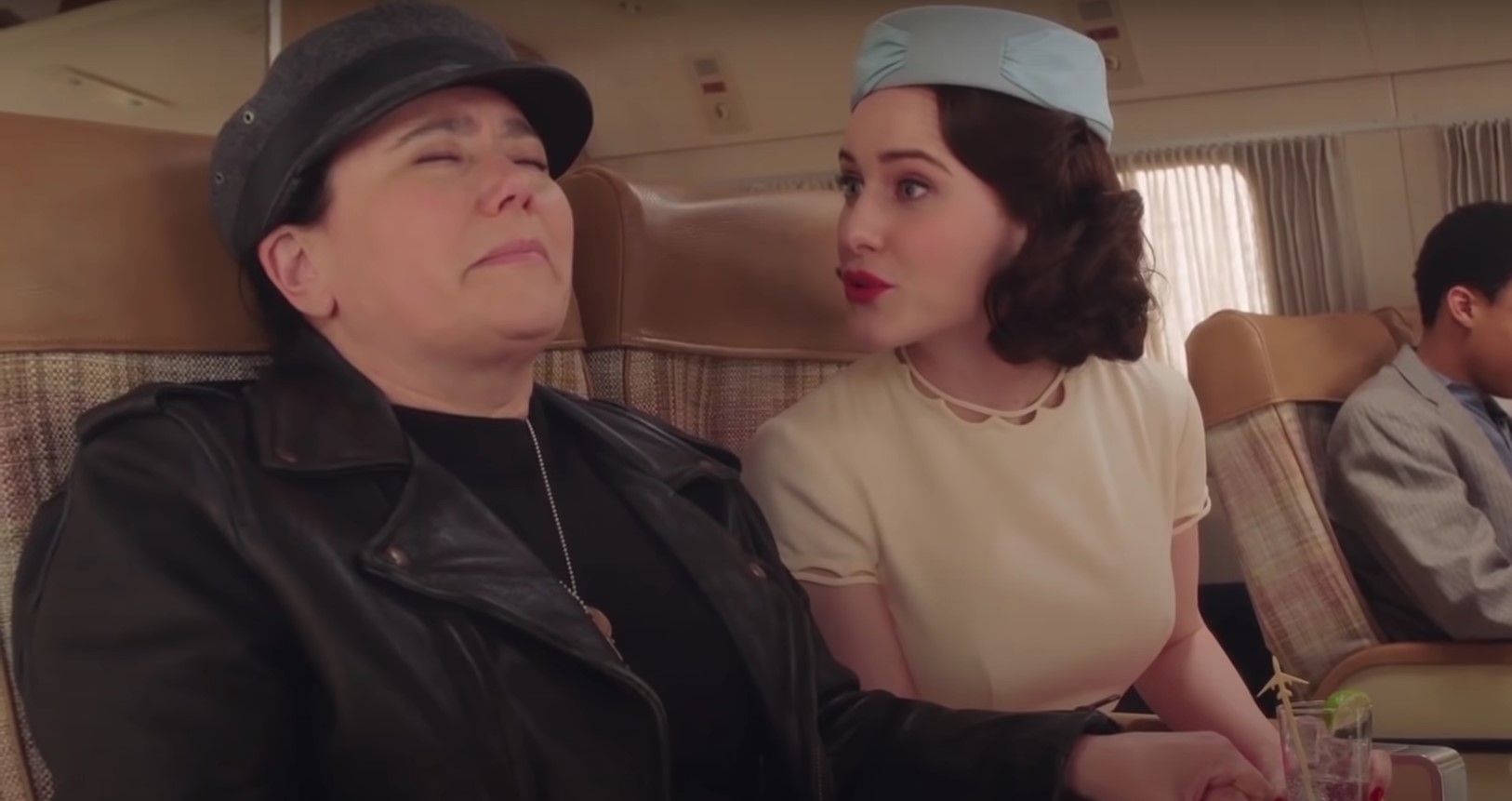 Set in the late 1950s and early 1960s, ‘The Marvelous Mrs. Maisel’ is a period comedy-drama series. In the beginning, Miriam “Midge” Maisel, née Weissman (Rachel Brosnahan), is a relatively happy homemaker with two children. But after her husband Joel (Michael Zegen) leaves her for his secretary, her life comes to an abrupt halt. And it is then that Midge discovers that she has a gift for stand-up comedy and finds her manager in Susie Myerson (Alex Borstein), an employee of the bar where Midge gives her first performance.

In the pilot episode, Midge and Joel live with their two children — Ethan and Esther — in the same Manhattan Upper West Side building as Midge’s parents, Rose (Marin Hinkle) and Abe Weissman (Tony Shalhoub). Joel works for his uncle at Tri-Borough Plastics and aspires to be a stand-up comedian. However, he doesn’t have the talent for it and copies the jokes of more prominent comics such as Bob Newhart during his weekly routines at the Gaslight Café. After realizing that his comedic career isn’t going anywhere, he lashes out at Midge, who has been nothing but supportive towards him. He subsequently leaves her for his secretary, Penny Pann.

When Rose and Abe blame Midge for the separation, she goes to Gaslight and delivers a drunken, raw, and impromptu performance. Among her limited audience is Susie, who becomes her manager. Midge also befriends Lenny Bruce (Luke Kirby), a real-life stand-up comedian who has come to be regarded as one of the greats of all time. They meet after Midge gets arrested for exposing her breasts during her routine.

The rest of the season revolves around Midge and Susie trying to gain some footing in the highly competitive and misogynistic stand-up landscape of New York. Joel’s parents, Moishe (Kevin Pollak) and Shirley (Caroline Aaron), run the Maisel and Roth Garment Company together and are the antithesis of Midge’s reserved and intellectual parents. In the season finale, Joel, having broken up with Penny, sleeps with Midge. But their relationship suffers another stoppage before even getting a proper restart when Joel finds out about Midge’s stand-up act. As the season ends, Midge claims a stage name for herself — Mrs. Maisel.

Midge gets a job as a make-up counter girl at B. Altman in season 1. In the second season, she is relegated to performing the duties of a switchboard operator after a public spat she had with Penny. She and Abe discover that Rose has moved to Paris, France, and they haven’t noticed. They follow Rose to the City of Lights and find her being immersed in the art and culture of the city. Abe decides to stay while Midge goes back to New York. He eventually convinces Rose to come back with him. Once in New York, he brings certain changes to their lives, including getting Rose the position of the auditor of the art classes at Columbia University, where Abe is a tenured professor of mathematics.

Later in the season, both the Maisels and Weissmans visit the Steiner’s Resort in the Catskill Mountains for their summer vacation. While staying there, Abe learns about Midge’s stand-up career. Soon after, he and Rose find out that their son, Noah (Will Brill), works for the CIA. Midge becomes romantically involved with a surgeon, Dr. Benjamin Ettenberg (Zachary Levi), whom she meets at the resort. Benjamin has a much more positive reaction to Midge’s career as a stand-up comedian and eventually asks Abe for permission to marry his daughter.

Meanwhile, Joel quits his job at Tri-Borough Plastics in season 1 and starts to help out his parents with their business in season 2. After his father gives him $60,000 and tells him to find his purpose, Joel decides to set up a club. Midge’s career graph continues to rise, despite the attempts of sabotage by Sophie Lennon (Jane Lynch), a seasoned comedian who wears a fat suit during her acts. In the season finale, Midge accepts the offer of serving as the opening act for the US and Europe tours of the renowned African American singer Shy Baldwin, without even thinking of her prospective fiancé. The second season finale ends with Midge showing up at Joel’s place, seeking comfort. They end up having sex.

By the time the third season starts, Midge has stopped working at B. Altman and has ended things with Benjamin with a letter. And Susie has become Sophie’s manager. Abe has left his jobs at Columbia and Bell Labs. Overcoming numerous hurdles, Susie comes through for Sophie and arranges for her to star in a Broadway production of August Strindberg’s 1888 play ‘Miss Julie’ opposite the well-known actor Gavin Hawk (Cary Elwes). However, on the opening night, Sophie sabotages the production by reverting to her stand-up personality.

Rose rejects the money she receives from her family trust after she has a falling out with her family. This puts more financial constraints on her and Abe, and they reluctantly move in with Moishe and Shirley, who quickly get on their nerves. Joel grows close to Mei Lin (Stephanie Hsu), a Chinese-American woman who helps him with his club. She even helps him get a liquor license for the establishment.

Midge continues to thrive as a rising stand-up star. She delivers one successful performance after another in Las Vegas, Nevada, as the opening act for Shy. She also discovers that Shy is gay. When Joel comes for a visit, they get drunk. The following morning, they discover that they have gotten married again. This time, they decide to divorce as quickly as possible. While Midge is in Florida, her parents come to stay with her, having grown exhausted with the Maisels.

Abe runs into Asher Friedman (Jason Alexander), an old friend and playwright who was forced to go on an exile from New York after being accused of being a communist. Abe writes an article in New York Times in defense of his friend and later is asked to be a theater critic for The Village Voice.

Midge returns to New York after Shy takes a break from the tour. She saves Joel’s club on the opening night by giving a spontaneous performance during a technical issue. She also convinces Moishe to sell her and Joel’s apartment to her. Rose discovers that she has a gift for Jewish matchmaking. Susie confronts her own gambling problems and convinces Joel to oversee Midge’s finance. As her mother passes away, Susie has to leave before Midge’s performance at Apollo Theater, where Shy is set to resume his tour.

For the first time in her career, Midge starts to have anxiety issues. Shy’s manager, Reggie (Sterling K. Brown), advises her to speak about Shy and the tour. During the routine, while she doesn’t outwardly mention that Shy is gay, she alludes to his effeminate personality. It wins over the crowd, but she loses her spot on Shy’s tour. The season ends with Midge and Susie standing on the tarmac as Shy’s plane leaves for Europe.

Read More: Where Was The Marvelous Mrs. Maisel Season 4 Filmed?