The Master Ending, Explained: Is Freddie Dreaming? What Happens to Dodd? 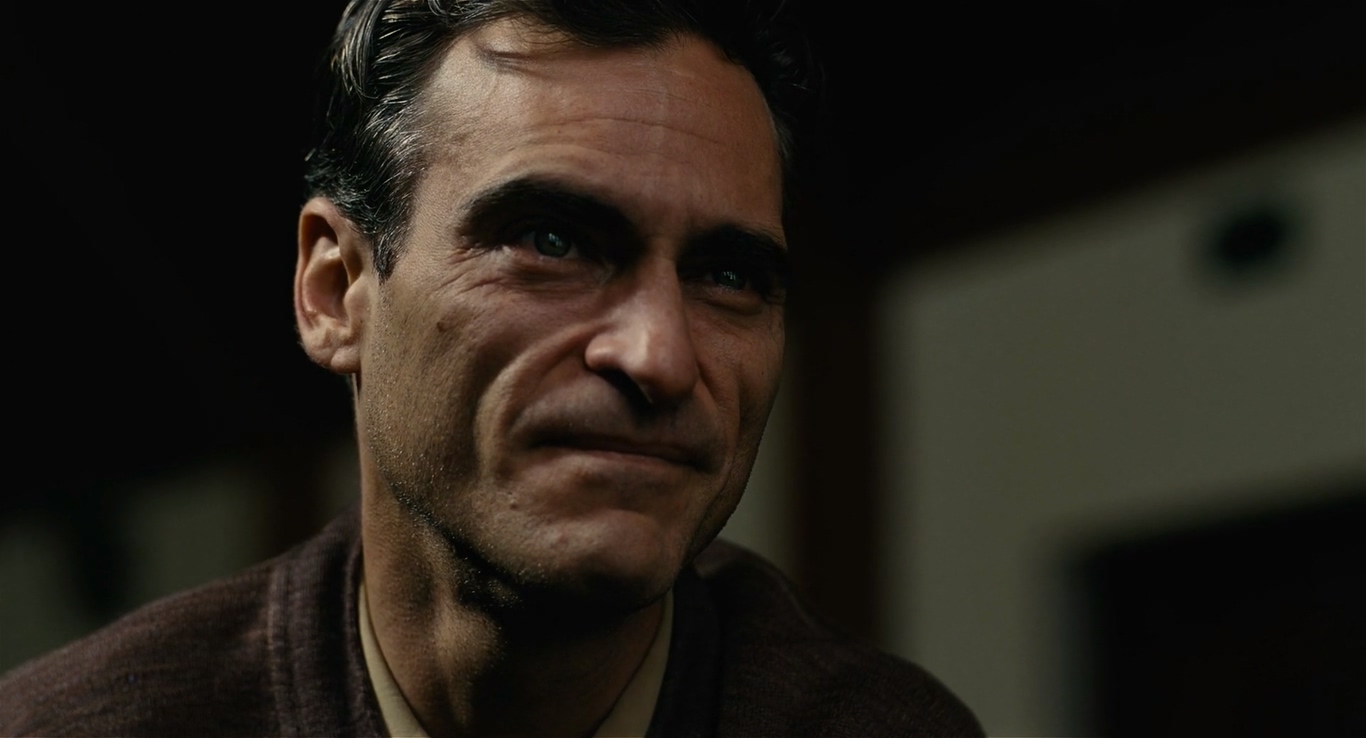 “You may be an ambassador to England or France/ You may like to gamble, you might like to dance/ You may be the heavyweight champion of the world/ You may be a socialite with a long string of pearls/ But you’re gonna have to serve somebody.” Thus go the lyrics of a widely popular Bob Dylan song. Man is a savage animal waiting to redeem himself by following a civilized path, and in the path of redemption, he needs a family, security, an anchor, and somebody to serve. Based on a premise that seeks to ask pertinent existential questions while tethering the man in its social context, Paul Thomas Anderson’s psychological drama ‘The Master’ exposes itself, above all, as a highly complex character study of a lone traveler and a false prophet.

Backed by beautiful cinematography, brilliant performances, and an ambient score by Jonny Greenwood, the film broods on a range of themes and topics including, but not limited to, the uneasy relationship between capitalism and spirituality and the binary between animal and man. It comes back to ground itself in the flawed worldview of an unreliable orator, Lancaster Dodd (Philip Seymour Hoffman), and his seemingly unpredictable protégé and subject, Freddie Quell (Joaquin Phoenix). The film never breaks its own shell of objectivity to deliver some hidden truth about the “beyond,” and the final moments of the film are seemingly puzzling in their anticlimactic disruption of viewers’ expectations. Let us now break down the ending of ‘The Master’ for you. SPOILERS AHEAD.

It is the 1950s. The Second World War has ended, and a shell-shocked Freddie Quell, along with his fellow Navy soldiers, waits in transit to be accepted back into civil society. But tormented by his basic carnal desires, Freddie finds it hard to leave the volatile past behind. He shows traits of erratic violence and fervor, including dozing off on a date with his co-worker and later ending up in a brawl with an old man at the workspace.

Afterward, he takes a job at a farm, where he makes a drink for an old man resembling his father, but the old man falls sick, and the co-workers accuse Freddie of poisoning the man. Freddie seems like a lone sailor charting the hostile seas of the world, often falling short of expressing himself and being misjudged in the process. Well, that is until destiny finds him, Lancaster Dodd. 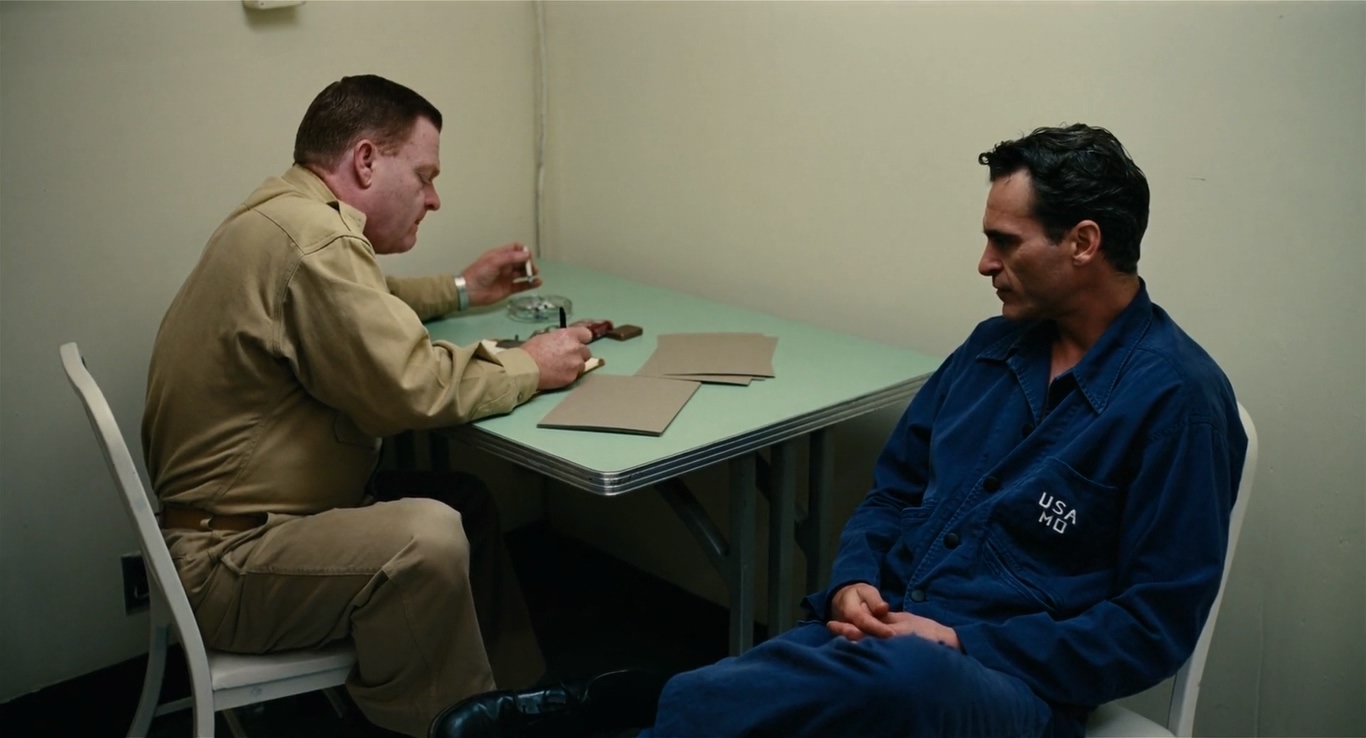 Freddie wakes up in a ship bound to New York, his drunken memory of the previous night blacked out. A woman takes him to the captain of the ship, Lancaster. Lancaster, unlike Freddie, is a larger-than-life figure who seems to have answers to all pertinent questions about human life and its aberrations. A cult leader of considerable charisma and grace, Lancaster likes to think that humans differ from the animal world in their quest for spirituality.

In the first session of spiritual counseling (what Lancaster calls “informal processing”), Lancaster manages to break the wall of apathy and probe into the depths of Freddie (who confides in Lancaster about his sexual encounter with his aunt and also talks about his girlfriend Doris), and they form an unlikely friendship, the energy of which characterizes much of the film. While one is a prophet claiming to have decoded the path to liberation, the other is a lone soldier whose perverse, voyeuristic mind (he sits at a corner in a gathering and imagines the women naked) does not have time for pondering upon grand philosophical questions.

As Lancaster’s religious cult (simply named “The Cause”) gets progressively run by Lancaster’s wife Peggy (Amy Adams), they attempt to “cure” Freddie of his disruptive predisposition. Lancaster’s persona of a mystique gets to his head, and he becomes increasingly impatient at criticisms, even from the trusted ones within the cult. Freddie goes his separate way, only to come back to Lancaster in the finality of the film. The final moments of the film veer away from its set course to disclose the true identity of the titular “master.”

The Master Ending: Is Freddie Dreaming In The End?

While alone at a movie theatre watching ‘Casper,’ Freddie is approached by a person who hands the telephone over to him. On the other side of the telephone, Freddie hears Dodd’s voice, who urges Freddie to visit him in England. Dodd says that he misses Freddie and claims that he can cure Freddie. Dodd says that he has gone back to the past and has recollected the moment when they first met. But in the next scene, Freddie seemingly wakes up from sleep, and we are under the impression that he has been dreaming all the while. 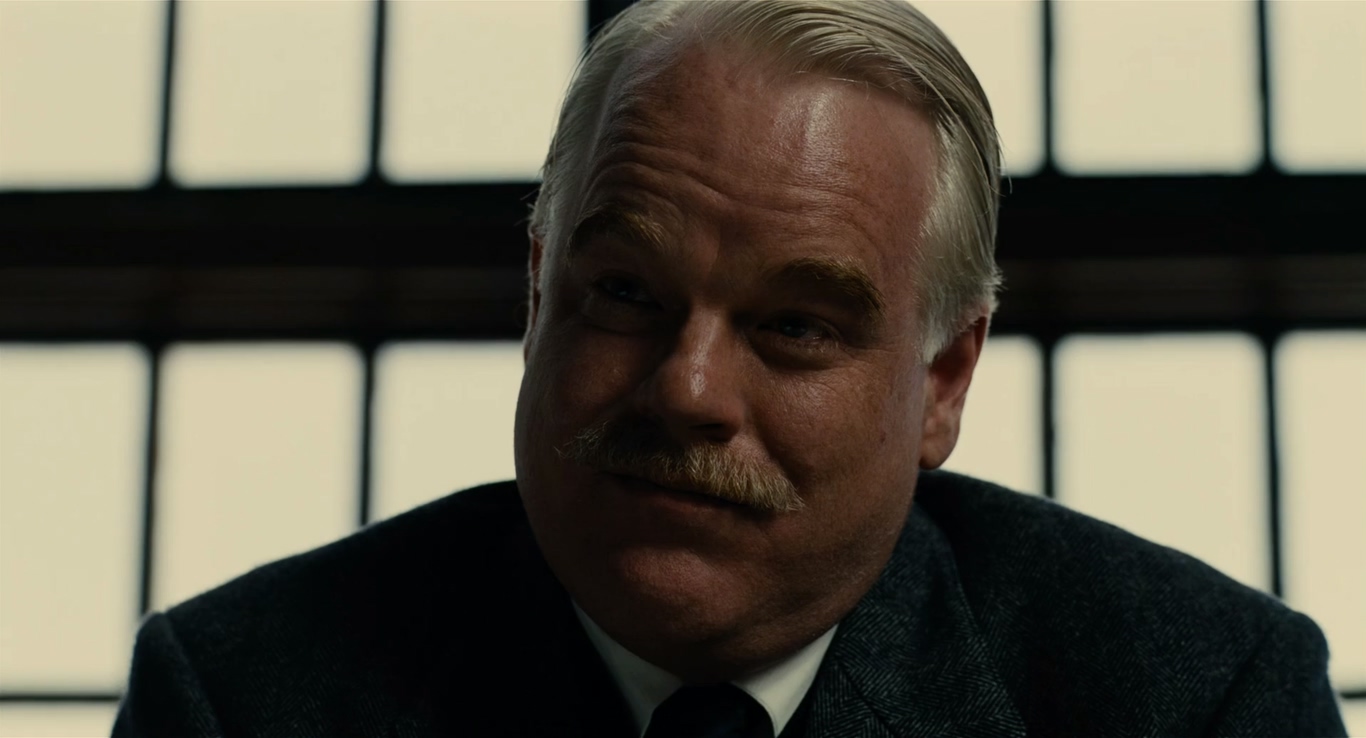 When Freddie reaches the school of Lancaster, Lancaster discloses that he has indeed traversed the past, having found the moment of their first rendezvous, which happens to be during the siege of Paris in 1870. However, as Lancaster’s doctrine has reportedly replaced recollection with imagination to unlock the more creative side of the brain, we cannot wholeheartedly rely on Dodd’s narrative. Although, Dodd’s story gives way to momentary euphoria as it binds the two drifting souls in a primordial communion. The last minutes unravel like images in a dream, but I believe Freddie is not dreaming past the movie theatre sequence. The ending of the film conveys that Freddie has finally been able to break away from the overarching influence of Dodd.

Does Freddie Get Cured?

Freddie’s psychological imbalances seem to have come from his own family, or the absence of it. We know that Freddie’s father is dead, his mother is psychotic and he had sexual intercourse with his aunt. Moreover, the trauma of war has rendered him a neurotic man. Uneasy with women, Freddie’s life is driven by the lack of a father figure, which he finds in the eccentric and charismatic leader Lancaster Dodd.

A seemingly civilized man, Dodd has some defined homoerotic feelings for the animal in Freddie, and as they roll together out on the lawn after their release from jail, we get to perceive what seems like a dance of ecstatic energy. But Peggy senses the homoerotic tensions in their friendship and asks him to “stop with this idea.” Freddie has been lovingly reprimanded by Lancaster as a scoundrel, an animal, and a naughty boy. Lancaster begins to admire Freddie for his violent, seemingly unstable behavior but falls short of reading the character to fully cure him. In the scene where they meet for the first time, Lancaster calls Freddie a “hopelessly inquisitive man,” a remark which can’t be further from reality.

A war veteran, Freddie does not seek answers to grand questions regarding life and existence – he would rather embrace the meaninglessness of it all. However, he has found in Lancaster a friend and a guide who accepts Freddie with all his flaws, and he would not trade the feeling for the world. While Freddie himself has not read the book of Dodd, he is ready to beat up anyone who questions the rational integrity of Dodd’s preaching. 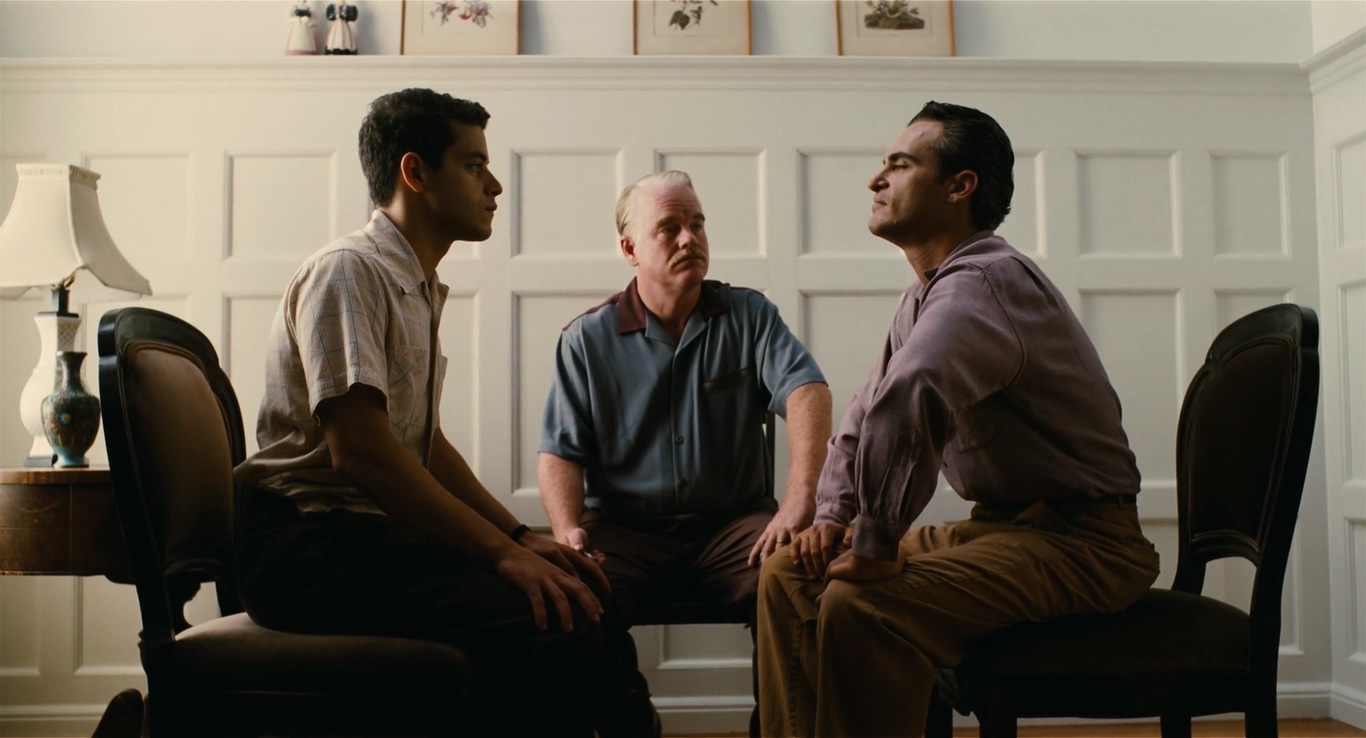 Throughout Freddie’s stay in “The Cure,” Lancaster, Peggy, and others try to cure Freddie with their questionable methods, frustrating Freddie in the process. While at one point, Freddie seems to be cured, the final moments of the film reverse the narrative. In Lancaster’s office, Peggy leaves after remarking that Freddie is beyond cure. Yet again, in the final scene of the film, we are brought to the same beach to see Freddie caressing a female sculpture made of sand, just like at the beginning of the film.

The apparent suggestion is that Freddie is not cured, as “The Cure” has failed him. However, if we are to probe deeper, we would be able to see the inherent flaw in the essentially anthropomorphic formulation of Dodd: that man is above animals. Man is intrinsically an animal, and when he chooses to separate himself from the world of nature, it is because of his own conditioned environment.

Is Dodd a Fraud? Who is the Master?

Many would think that Dodd is a fraud, but I would not jump to conclusions so fast. While there are obvious flaws in his brand of self-actualization, his attempt to understand the meaning of life is characterized by a degree of honesty. He is a charismatic preacher and practitioner of his own doctrine, but as the narrative moves forward, the cracks in his carefully cultivated personality get exposed in broad daylight. He is arrested by the Pennsylvania State Police for wrongful withdrawal of funds. His own son does not believe in his aerated and lofty preaching. He gets agitated when one of his followers, Helen, expresses doubt in a section of his new book. 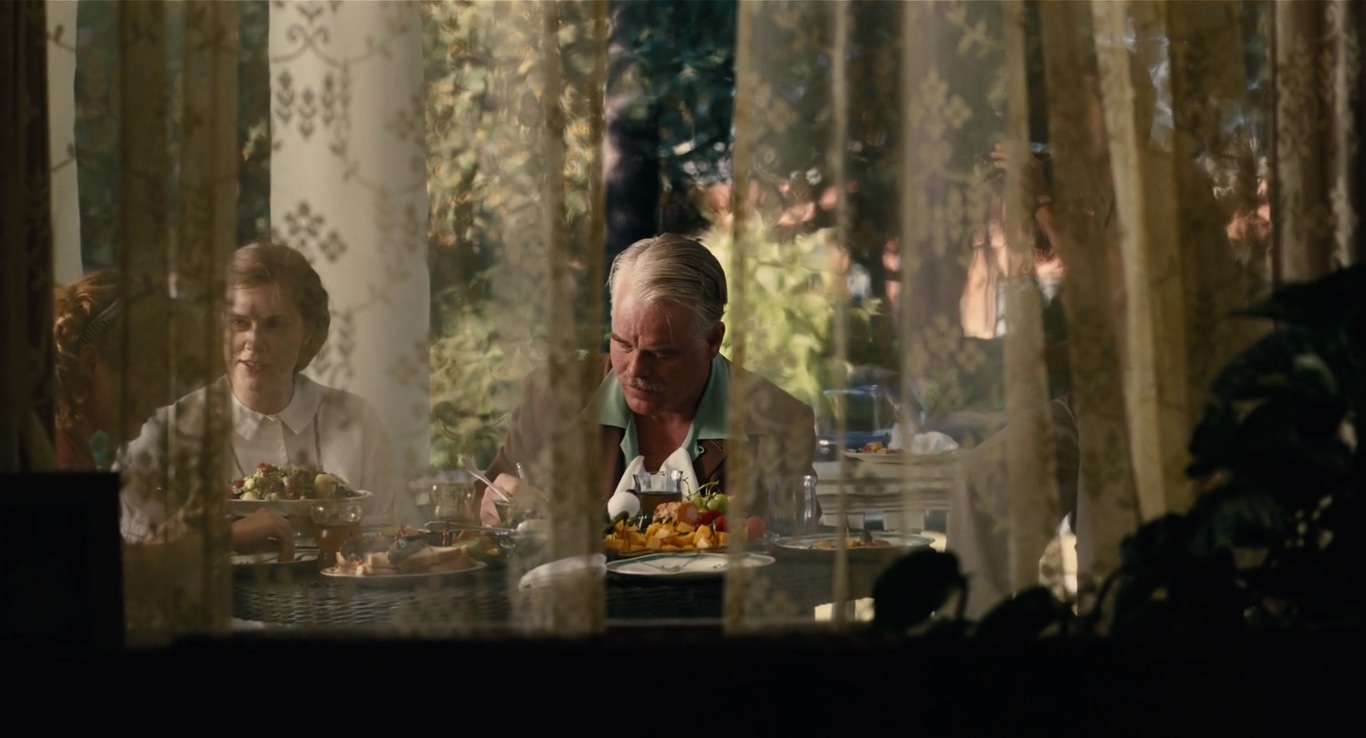 We get the feeling that Dodd’s life is gradually moving out of his control and into the hands of his domineering wife, Peggy. When we meet Dodd in England, the most striking thing in the whole episode is the absence of “laughter,” which, according to Dodd, is the secret to living. Lancaster says to Freddie, “For if you figure a way to live without a master, then let the rest of us know, will you? For you’d be the first person in the history of the world,” and we are under the impression that he is not the master after all.

While Freddie, anchorless and drifting, is his own master, Dodd claims to be a master but becomes a slave to his own familial and cultist institutions in the process. While Freddie does not need Lancaster to unravel life’s mysteries for him, Lancaster is envious of Freddie’s absolute freedom. The penultimate moment of the scene sees Lancaster singing a love song to Freddie, which closes the film on a pensive note. In an epilogue, Freddie asks the same questions of the “informal processing” to a girl while having sex with her. While he is not a believer, he has found some truth in Dodd’s doctrine.

Read More: Where Was The Master Filmed?