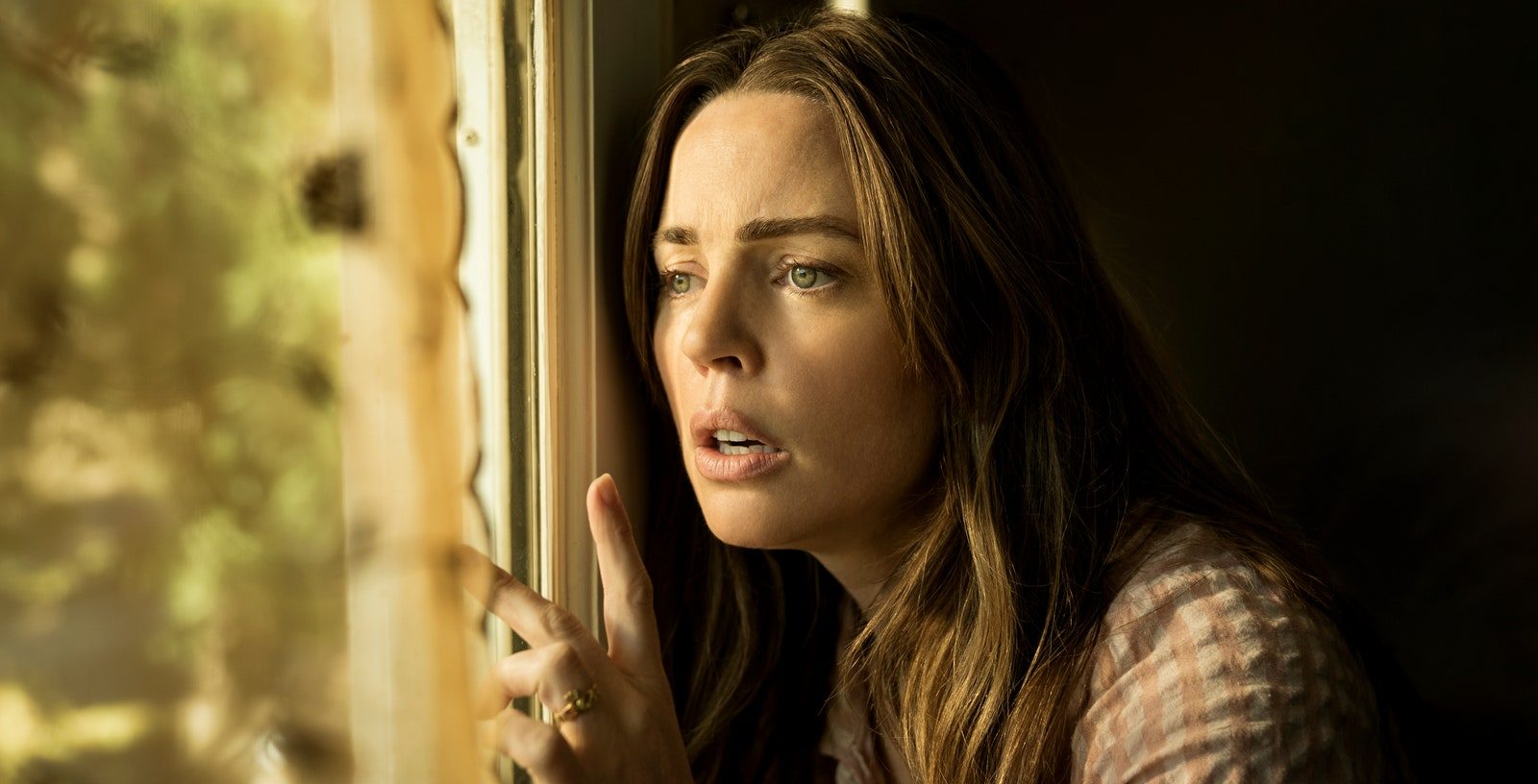 ‘The Mosquito Coast’ is an action-adventure series based on the award-winning fiction novel of the same name by travel author Paul Theroux. His nephew, Justin Theroux, essays the lead character Allie, an idealistic genius disillusioned by the greed of modern America. In the process of relocating to Mexico, the story finds the Fox family escaping the clutches of the law for an as yet unknown crime. After a particularly daring rescue by Dina that leaves even the overconfident Allie speechless, episode 2 follows the family’s breathless attempts to secure passage to Mexico. Let’s dig into ‘The Mosquito Coast‘ season 1 episode 2 and see what we can glean from the information we have about the Fox family’s off-the-grid escape. SPOILERS AHEAD.

Episode 2 opens right after Dina rescues Allie from the cops by ramming his truck into the police car. Handcuffed and breathless, Allie sets up a decoy to fool the cops and hides inside a massive slum with Dina. Surrounded by homeless people and seeing them live their daily lives, Allie explains to Dina his disgust at consumer culture and how capitalist greed has resulted in people who are not consumers getting discarded, like those that they see around them. Dina finally seems to begin to understand where her father is coming from and the motivations behind his actions.

The two then reunite with Margot and Charlie and head to the Polski farms, where Allie and Margot break into the safe and steal all the money in it. Allie also cheekily leaves a note behind for his boss, making it obvious who committed the robbery. The family then proceeds to Arizona, where Allie convinces two “coyotes,” agents who help people illegally cross the US-Mexican border, to take them across. In exchange, Allie uses his scrappy inventor skills to fashion a Faraday cage and subsequently removes the coyotes’ tracking bracelets, letting them roam around freely without the authorities tracking them.

A short time after the family sets off for the Mexican border along with the coyotes, the cops show up at the scrapyard where they discover Allie’s Faraday cage. The mysterious government agent, Jones, instantly recognizes it for what it is and after questioning the local sheriff briefly, sets out with her partner in a helicopter to continue her search for Allie.

The Mosquito Coast Episode 2 Ending: Will Chuy Continue to Help the Family?

The family, bundled in a car with the two coyotes, is soon intercepted by a group of local border militia who are on the hunt for illegal Mexican immigrants. Chuy and his friend, being Mexican, are instantly fearful but Allie tries to talk their way out of it and almost succeeds. However, the group is discovered to be fugitives when the militia members get a call with their description, which results in a standoff with the Fox family trapped in between. During a brief but violent gun battle, all the militia members and Chuy’s friend are killed. Allie notices more militia members on their way and the family, along with Chuy, begin to run into the desert, leaving their now unusable car and supplies behind.

Episode 2 leaves the Fox family in a dire state. Stranded in the middle of the desert with only a small amount of water, being chased by the police, government agents, and now the border militia, the family seems seriously outmaneuvered. Their only hope for survival lies with Chuy, who knows his way around the borderlands and most likely has contacts in the area who can come to their rescue. However, after the death of his friend, there is a high chance that Chuy is not in a particularly charitable mood to help the family.

Though we see them running away together, it is only because both Allie and Chuy want to get away from the border militia, and not because Chuy is continuing to help them. This point is further emphasized when we recall that it was not Chuy but his friend who made the deal with Allie to help them cross the border. Without Chuy’s help, there seems to be very little the family can do except wait to get captured or die out in the desert.

Fortunately, there are a few reasons why Chuy might continue to help them, the foremost of which is that Allie still has the cash that he stole from his workplace. A significant amount, he has used the money before to get people to help him and will most likely try to entice Chuy with it. Furthermore, since Chuy’s hacked tracking bracelet has been discovered by the cops, he cannot go back to his home and will also have to remain on the run. This could be a factor that convinces him to help the Fox family since he is now in essentially the same situation as them.

Will Dina Continue to Stick to Allie’s Plans?

At the beginning of the show, we see Dina as Allie’s most vocal critic, even trying to run away when her mother tells her that they have to leave their home. She constantly complains about the family’s off-the-grid lifestyle, and the fact that her father suddenly uprooting them pays no attention to her own needs as a person.

However, after having to brave the city at night alone as a result of trying to run away from her family, she is glad to be reunited with Allie. Dina’s loyalty to her family is undeniably proven when she plows her father’s truck into a police car to rescue Allie, and we also see her subsequently recite Allie’s beliefs about consumerism to the government agent.

From then on, Dina joins Margot and Charlie as unquestioning followers of Allie’s unrealistic plans and seems to have faith in her father’s actions. Having rejected Jones’ offer to go and live a comfortable life with her rich grandparents, it looks like Dina is in for the long haul and will stick by her family. However, there are still small possibilities of cracks developing in her faith in Allie, especially after seeing the violent deaths of the militia members and Chuy’s friend in the desert. As long as Allie somehow keeps them safe, we believe Dina will continue to follow him.

Why Have Allie and Margot Been On the Run For So Long?

The mysterious crime that Allie committed years ago is an overarching question of the series and likely doesn’t get completely answered until much later. However, every so often we are given clues that tell us a little more about what the crime might have been. We already know that Allie and Margot have been on the run for 9 years, and changed their identities 6 times, to escape the authorities. This is also the reason that the family lives off the grid and Allie has a special hatred for all kinds of phones. Their precautions seem to suggest the hunt mounted to find them is a massive one, telling us that their crime was equally big. The scale of Allie’s crime is further emphasized when Allie replies with a simple “enough” when Dina asks him how much trouble they’re in.

Another hint as to Allie’s notoriety is how blatantly he commits the robbery at Polski farms, leaving a note that reveals him to be the perpetrator of the crime. It is clear that the crime that he and Margot are on the run for is so significant that petty thievery is inconsequential to them. Given Allie’s fantastic DIY skills with all things mechanical and electrical and his disregard for the system, the crime is very likely one that has caused significant financial damage to some kind of large capitalist or government entity.

Read More: Is The Mosquito Coast Based on a True Story?