The Privilege Ending, Explained: Does Demon Possess Finn and Samira?

‘The Privilege’ (alternatively titled ‘Das Privileg’) is a German supernatural horror movie that follows Finn, a teenager traumatized by his elder sister’s death. Finn and his friends begin to experience inexplicable supernatural occurrences in their surroundings. As the teenagers investigate the matter, a series of haunting truths come to light.

The film, directed by Felix Fuchssteiner and Katharina Schöde, blends various horror, fantasy, and science fiction elements to craft a compelling narrative that keeps the audience on the edge of their seats. However, as we arrive at the climax, many questions remain unanswered. If you seek some clarification about the ending of ‘The Privilege,’ here’s everything you need to know! SPOILERS AHEAD!

‘The Privilege’ opens with an eleven-year-old Finn spending time with his elder sister, Anna, while their parents are out. However, Anna experiences the presence of a supernatural entity trying to hurt her and Finn. She drives Finn away and stops at a bridge. Finn also feels the entity’s presence and follows Anna. However, Anna falls from the bridge’s edge and dies, traumatizing Finn.

Years later, Finn becomes a teenager who has disturbing visions of Anna’s death. He and his twin sister, Sophie, are prescribed a new pill by Dr. Steinke. At school, Finn hangs out with his best friend, Lena, and struggles to talk with his crush, Samira, who is Dr. Steinke’s daughter. Soon, Finn begins to experience the presence of the evil entity that attacked him and Anna as Sophie starts to fall sick. Sophie breaks up with her boyfriend, Ramin, out of the blue. Finn finds the situation odd and tries to talk with Ramin but finds him dead. It becomes evident that greater supernatural forces are at play, and Finn teams up with Lena to uncover the conspiracy.

Finn learns that the drug prescribed to him is the root of the seemingly supernatural occurrences. The medicine is actually made of a fungus that grows on dead bodies and is believed to have connections to demonic entities and otherworldly creatures. Finn learns that the pills have allowed an evil entity to possess Sophie. He tries to have her exorcised with Lena and Samira’s help but fails. At school, the trio’s friend, Leander, also falls sick and dies. From Leander’s bag, Finn and Samira discover evidence that reveals they were all adopted by their parents.

Meanwhile, Lena sneaks into a marketing presentation for the pills and discovers that the supernatural incidents are connected to the pharma company Trondthal, headed by Finn’s father. As things finally begin to make sense, Finn is kidnapped by Trondthal and forced to undergo a deadly ritual. Whether or not Finn survives the ordeal and unveils the mystery of the pills makes up for the rest of the plot.

The Privilege Ending: Does Finn Escape From the Cult? Does The Demon Possess Him?

As the narrative progresses, it becomes evident that Finn’s parents are hiding something from him. We later learn that Finn and his friends are adopted and are being groomed by their parents for a sinister purpose. The parents are part of a cult that works under the umbrella of Trondthal. The cult has been around for centuries and is known by various names such as the demons and the devil’s henchman.

Thus, it is hinted that the bodies of the cult members are merely vessels for evil spirits. Finn’s parents, sister, and Dr. Steinke are all part of the cult. The pills facilitate the transition process of the spirits from one body to another as they cannot live within a dead body. The same is evident when Finn’s grandfather dies, and Finn is chosen as a replacement vessel.

During the climax, the cult subdues Finn and begins the transitioning ritual. The demonic spirit that resides within the body of Finn’s grandfather emerges out as do the other spirits. The demon tries to possess Finn but is stopped after Lena intervenes and sets the vessels on fire. She rescues Finn, who gets rid of the fungus and escapes the burning house.

Finn and Lena reunite with Samira while the cult members and the spirits seemingly burn inside the house. In the end, Lena’s presence of mind and timely intervention saves Finn. However, Sophie survives the fire and attempts to coerce Finn into joining her. Samira runs over Sophie, seemingly killing her. With the horrific incidents behind them, the teenagers drive away into the night.

Did the Demonic Spirit Possess Samira?

Just as the teenagers believe they are in the clear, a demonic spirit attacks them. This spirit resembles the one the trio encountered while trying to exorcise Sophie. As the teenagers drive past the bridge, they are attacked by the spirit and crash into the railing. The car hangs on the edge as Finn and Lena get out. The accident knocks out Samira, but Finn pulls her to safety before the car falls down. In the end, all three teenagers survive. They realize that they cannot go back and will have to forge their way forward. 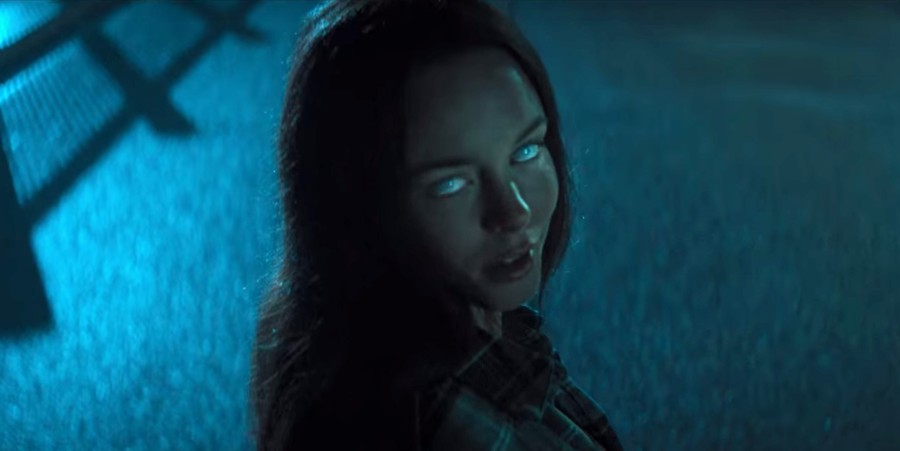 Moreover, they see an ad for the pills, which reiterates that they are still unsafe. While more demonic spirits are likely to attack the teenagers since they are aware of the pills’ true nature, the trio must stick together and fight back. However, Lena and Finn are utterly unaware that the demonic spirit now resides within Samira.

In the film’s final moments, Samira turns towards the audience, and her eyes glow blue — similar to the ones of the vessels. She also growls like the demonic spirit, confirming that Samira’s body has transitioned. Earlier in the movie, it is stated that Samira is also adopted and was taking the pills. However, the fungus had not yet manifested inside her. At the same time, the parasitic fungus had also not been expelled from her body, which made her susceptible to the demonic spirit’s attack. The demon intends to kill the teenagers but seemingly vanishes after the accident. The closing scene confirms that the demon actually transitioned into Samira’s body.

Read More: Where Was The Privilege Filmed?