When Did Teeter Get Branded? Does John Dutton Have the Brand?

In ‘Yellowstone‘ season 4, things between Walker and Lloyd get heated to the point that the entire ranch is engulfed in the conflict. John is forced to step in and diffuse the situation. John’s decision leads to a pivotal argument between him and Teeter. The moment addresses a critical sequence of events from the show’s third season, which will remind fans of Teeter’s branding.

Naturally, with a significant amount of time passed between then and now, viewers might have forgotten about the significance of the brand and the circumstances leading to Teeter’s branding. On the other hand, some readers might be curious whether John also sports the brand. We decided to gather all the details for you, right here! SPOILERS AHEAD!

When Did Teeter Get Branded on Yellowstone?

On the Yellowstone Ranch, the Yellowstone brand, a large “Y” symbol marks the sign of loyalty. It also signals the start of the second chapter in life for those who have erred in the past and have done some criminal activities. In the series, the ranch mainstays such as Rip and Lloyd proudly sport the brand while some such as Walker wear it reluctantly. Teeter joins the bunkhouse bunch in the show’s third season when Rip recruits some fresh pair of hands to aid in work on the ranch. Teeter is outspoken and energetic and proves herself worthy of her spot on the ranch. However, she does not get into the inner circle until the end of season 3. 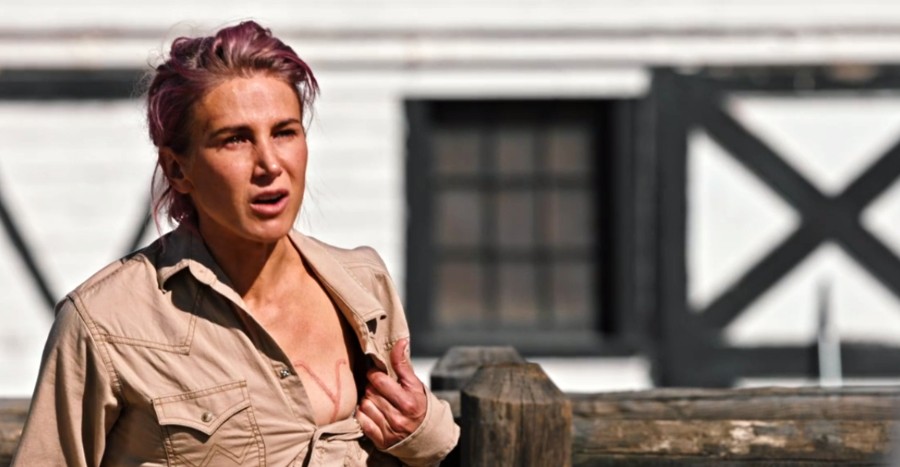 After surviving an attack perpetrated by Wade Morrow, Teeter and Colby pursue revenge against their aggressor. In the ninth episode of season 3, Rip helps the ranch hands obtain their revenge, and the group successfully kills Wade. However, Rip reminds them that vengeance comes at a price that is undergoing brutal branding. Thus, Rip secures the loyalty of Teeter, Colby, Ryan, and the others. In the process, Teeter swears her allegiance to the ranch and becomes the first woman to have the Yellowstone brand.

Does John Dutton Have the Brand?

In the seventh episode of season 4, Teeter requests John to let her remain on the ranch and reveals that she has the Yellowstone brand marked on her chest. The brand is also a symbol of family, and John reluctantly agrees to let Teeter remain on the ranch. Teeter’s conversation with John about the meaning and importance of the brand must’ve made viewers wonder whether John also sports the brand. However, we have received no confirmation about the same in the show so far.

Technically, branding serves as a mark of ownership of cattle that indicates the ranch from which they originated. Building on that principle, it is safe to say that the brand is the next best thing to the Dutton family name that the ranch’s workforce can obtain to become a part of the family. Since John is the owner of the ranch and a Dutton by birth, it is not essential for him to have himself branded.

Read More: Is Yellowstone’s Rip in Dazed and Confused?