Where is Angelyne Now? 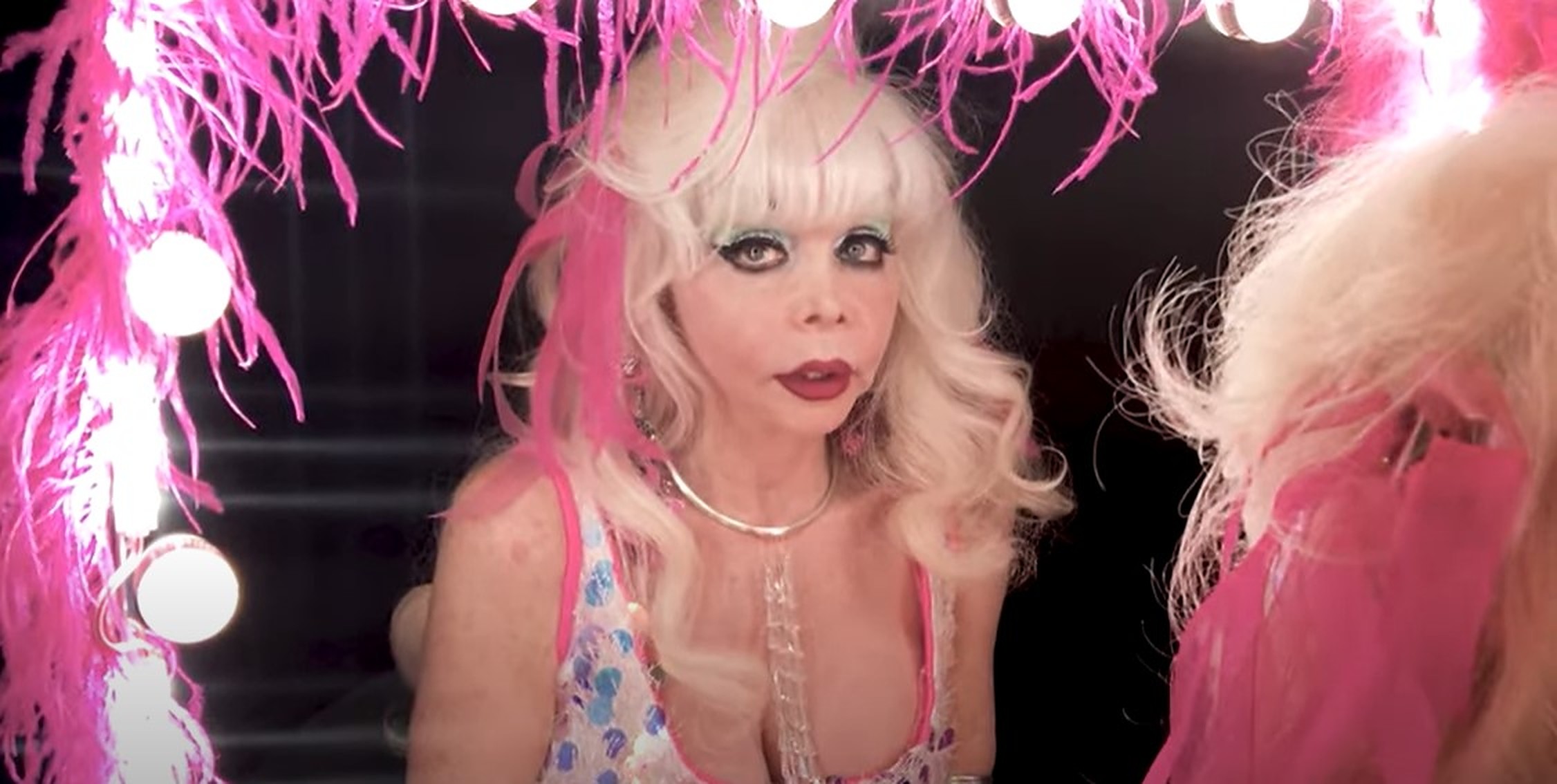 Peacock’s ‘Angelyne‘ is an original biographical drama TV series created by Nancy Oliver. It chronicles the life of renowned model and media influencer Angelyne, who first rose to fame in the 80s due to her iconic billboards around Los Angeles. She is a major part of the city’s culture and needs no introduction, as a lot about her has already been documented over the years in the news as well as in the show. But her fans must be curious to know what the icon is up to these days. Well, let’s find out, shall we?

Yes, Angelyne is pretty much alive and thriving and can still be often sighted in her pink Corvette on the streets of Los Angeles. She gained recognition after her first billboard in February 1984 went viral, after which we went on to record several music albums and singles. Not just that, Angelyne also starred in bit parts in numerous movies like ‘Earth Girls Are Easy’ and ‘The Frisco Kid.’ By 1995, she had more than 200 billboards all over the city.

Apart from advertising and modeling, Angelyne began dabbling in art in 1998 and started painting self-portraits. In a July 2002 interview, she shared that she won many awards for art during her school years but gave it up at the age of 13 when art galleries refused to showcase her work. She resumed her passion in 1998 and has since held many exhibitions over the years. In addition, the iconic influencer divulged that a majority of her income comes from investors and stocks, as well as getting hired for cameos or her billboards being featured in media.

According to Angelyne, she further delivered a lecture at UCLA in November 2001 about her experiences as an artist. Moreover, her self-portraits have been reproduced and used on billboards too. In addition, she sells her merchandise and art to fans on her website, where she also used to offer tours of Hollywood and Sunset Boulevard earlier. In 2002, she dipped her toe in politics as well, by running as a candidate for the Hollywood city council and then in 2003 from Los Angeles, in the gubernatorial recall election.

Angelyne created her campaign around the slogan “We’ve had Gray, we’ve had Brown, now it’s time for some blonde and pink” and used a pink Maltese named Budda as her mascot. She received 2,536 votes and finished in the 28th position out of 135 candidates. She also has an Angelyne Fan Club, for which the annual membership fee is around $20, and through it, she sells her merchandise to fans. However, in 2007, Angelyne had a brief spat with developers about compensation for relocating her fan club office. Later in 2013, she collaborated with designer Michael Kuluva for a limited-edition t-shirt in his clothing line Tumbler and Tipsy.

Where is Angelyne Today?

Angelyne currently resides in Los Angeles and continues to be a public figure around the city. She occasionally sells her merchandise from the trunk of her car when she meets fans in person, along with on her website. She has an active social media presence and updates her fans regularly with pictures and videos. In April 2021, Angelyne auctioned her first NFT online — a crypto art piece created by LA-based artist Lizzie Klein. Angelyne also ran without party preference in the 2021 California gubernatorial recall election. She received 0.05% of the vote, and Gavin Newsom was not recalled.

In an August 2021 interview, Angelyne shared her plans for rehabilitating the people without homes if she got elected, saying, “Religious organizations such as churches, mosques, and temples will fund The Homeless Project. This will not cost the taxpayer anything. The members would freely donate money specifically to The Homeless Project. The contributions to help homelessness will not be touched by clergy. There is no skimming off the top. Every contribution will be available for scrutiny on a state website. PSAs will help the cause by putting up billboards, radio and TV ads, newspapers, social media, etc.”

On top of that, Angelyne announced in 2021 that she was making a film about herself titled ‘Angelyne: Billboard Queen.’ Unfortunately, the production got delayed due to the emergence of the COVID-19 pandemic. Through the film, she wants to depict her actual story, which she claims has been misrepresented by tabloids. In a May 2022 interview, Angelyne not just criticized Gary Baum’s 2017 report on her in The Hollywood Reporter but also expressed her concerns that the show ‘Angelyne’ portrays her inaccurately.

“There’s only one Angelyne, and I’m concerned that show might mislead people…They wanted to make me an executive producer. And I initially agreed because I didn’t know it was gonna be so bad,” said Angelyne. She added, “I’m an artist. I paint in the mirror. Everything has to be perfect – my eyes, my nose, my mouth. And for someone to take that and mess it up is painful. I can’t even watch it.” Angelyne now hopes that her film would clear the air about her life once and for all.

Read More: Is Angelyne Based on a True Story?