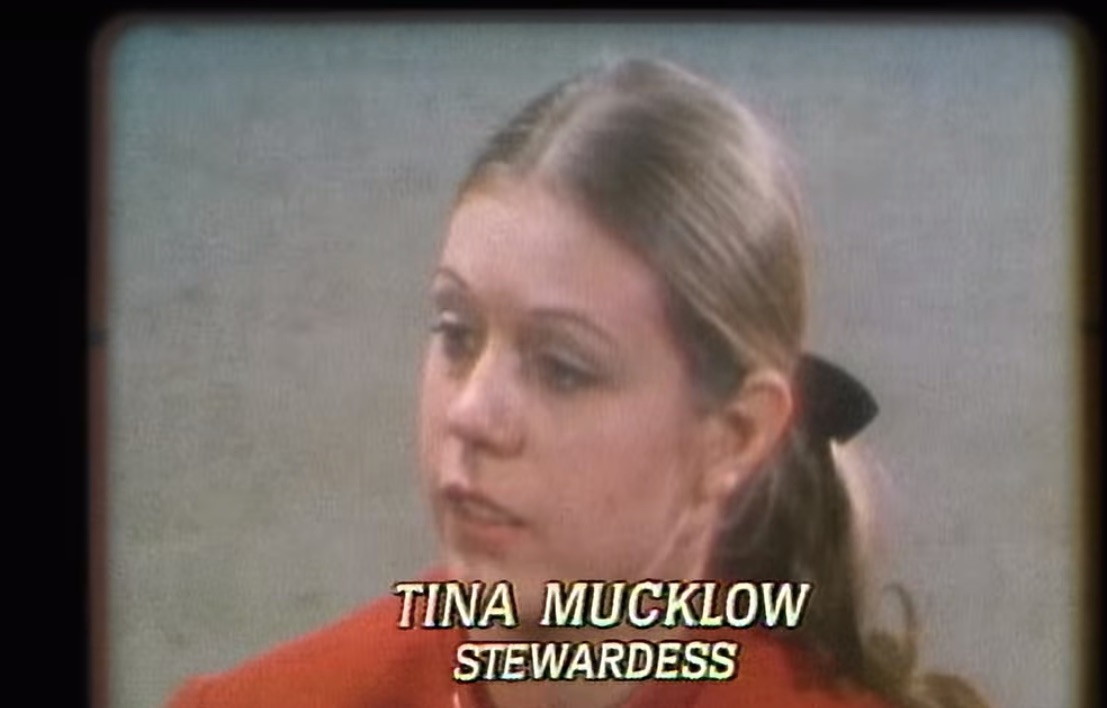 Netflix’s ‘D.B. Cooper: Where Are You?!’ tells the story of the infamous skyjacker and the subsequent hunt for him. The show primarily focuses on Tom Colbert and his efforts to prove that Bob Rackstraw was D.B. Cooper. We also get to know about other suspects and the entire community that has been built around this mysterious figure, whose true identity is unknown to this day. While Cooper has become this legendary figure that everyone wants to know more about, the real heroes of that day are rarely talked about. The crew of the flight showed bravery in the face of what could have turned out to be a catastrophe. One of the people credited for handling the situation exceptionally well is Tina Mucklow. Here’s what you should know about her.

Who is Tina Mucklow?

50 years ago today, I was a stewardess who had just turned 22. None of the crew knew how our lives were going to change as we boarded NWA 305. I can still remember looking at the hijacker’s note: “MISS I HAVE A BOMB. COME SIT NEXT TO ME. YOU ARE BEING HIJACKED.” pic.twitter.com/5ztllHmPvJ

Tina Mucklow grew up in Bucks County, Pennsylvania, and wanted to work in aviation since she was 14. She landed her dream job when she was just twenty-two. She was the newest hire on the flight that later became famous for being hijacked by D.B. Cooper. In what was supposed to be just another normal flight, Mucklow was first alarmed when she saw her colleague, Florence Schaffner, sit next to a passenger in the last row. It was when she picked up the piece of paper (by Cooper) that Schaffner had dropped that Mucklow realized what was happening. The note mentioned the presence of a bomb, and she immediately relayed the information to the pilots.

When Schaffner left to take Cooper’s note to the cockpit, he asked Mucklow to sit next to her, following which she remained in continuous contact with him. While she kept her calm, she was very scared for her life and that of everyone else on the plane. “I prayed for him [Cooper] and for his family, and for forgiveness for him, too. And then I kind of let go of it and I felt at peace, and I just focused on what had to be done,” she said.

She was Cooper’s point person, relaying his messages, and even getting his demands delivered to him and opening the door through which Cooper would skydive. In the time that followed the incident, she refused to be defined by it. She was back at work within a month and dedicated her life to doing good in the world.

Where is Tina Mucklow Now?

Tina Mucklow lives in Eugene, Oregon, which has served as her home for more than three decades. She retired from her job as a flight attendant in 1981 and became a nun. “I actually had chosen to come into the Catholic faith in ’78, and I wanted to explore my own spirituality and a deeper prayer life,” she said. She went back to school in 1993, leaving the monastery and finding ways to work with the community “in a more personal, more direct way”. She found different ways to do that, like staffing a county crisis call line, working in a residential facility, and launching an outpatient learning and recovery center.

Now in her 70s, Mucklow has dedicated her entire to helping people one way or another. She has also been hounded by Cooper enthusiasts who wanted answers from her about the case or to have their own suspicions about some suspect confirmed. While she fully cooperated in the FBI’s investigation, she has made it a point to not talk about the case otherwise, which has led people to make many theories about her silence. Recently, however, she has started to talk about the incident, giving occasional interviews, consulting on a film about the crew’s experience of the hijacking, and appearing in History Channel and HBO’s documentaries about the case.

As for the identity of D.B. Cooper, Mucklow wishes the FBI had succeeded in solving the case. While the public has made him out to be an outlaw legend, she never saw him as something more than a criminal who threatened her life, as well as, that of every other person on the plane. However, she agrees with the Bureau’s decision to conclude the investigation, recognizing “that it was probably the right thing to do given the amount of time [that has passed] and knowing all the needs of our world today.”