Where Was All Hail Filmed? Is It A True Story?

Argentine comedian-director Marcos Carnevale’s existential comedy movie ‘All Hail’ (‘Granizo’) boasts an eccentric but humane premise, toying with the ideas of free will and predestination. It follows a meteorologist weatherman named Miguel Flores, who has a career largely without blemishes, and he is something of a star in television. However, when he cannot predict a devastating hail storm, Miguel must escape the wrath of the angered public.

Miguel arrives in his hometown in Cordoba, and in the unplanned journey, he rediscovers his roots. Most of the story unfolds in Miguel’s hometown and Buenos Aires, showcasing colonial structures and sleepy pastoral landscape. It is natural for many to wonder whether there is a grain of truth in the narrative and also seek to identify the filming locations. If you are looking for the answers to the same questions, we have got your back. Let us probe deeper!

‘All Hail’ was filmed in its entirety in and around Argentina, especially in Buenos Aires and Cordoba. Principal photography commenced in the early months of 2021, wrapping up in July of the same year. Argentina, the home country of Fernando Solanas and Gaspar Noé, provides a hassle-free ambiance for directors and producers. Argentina is known for its breathless scenic beauty, from deserts to forests and mountains to vast coastal stretches. Although there is no tax credit program, foreign productions do not have to bear the 21% national tax on production-related services.

Argentina is the second Latin American country where Netflix expanded its reach. For the lack of competitors and a stable internet connection, it took time for Netflix to strengthen its base in the region. However, as of 2020, Latin America reportedly makes up 13% of the company’s global revenue. The streaming giant is thus planning to fire up productions in Argentina, as evident from ‘El Reino,’ the original Argentine thriller series produced by Netflix. Let us now take you to the specific locations where the movie was filmed.

Several sequences in ‘All Hail’ were filmed in and around Buenos Aires, the cosmopolitan capital of Argentina. Filming locations in the city include a media house, while a portion of the shooting possibly took place in a studio environment. Buenos Aires boasts majestic architecture, vibrant nightlife, and a distinct cuisine to entice the tourists. The central district of Plaza de Mayo houses stately 19th-century buildings. It has also served as the filming site of several productions like ‘Children of Men’ and ‘The Two Popes.’

While many segments were filmed in Buenos Aires, the crew filmed the bulk of the sequences in the Argentinian province of Cordoba. Seemingly, the director was out location scouting for the movie in January when he stumbled upon Inriville, a township in the Marcos Juárez Department of Córdoba Province. Presumably, this is where most of the filming took place. The township perhaps doubled as Miguel’s hometown in the movie.

Is All Hail Based on A True Story?

No, ‘All Hail’ is not based on a true story. However, the ambiance of the cancel culture that the movie weaves may have some truth. The story seems to suggest that in our day and age, it does not take more than a day for success to turn into failure. Miguel’s 20-year long streak comes to an end with his inability to predict the hailstorm, and with the mishap, his achievements seem to disappear. Director Marcos Carnevale from Inriville, Cordoba, seemingly paid homage to his own roots through the film.

With Carnevale at the helm, Fernando Balmayor and Nicolás Giacobone teamed up to write the screenplay. For the uninitiated, Balmayor is known for his work on the Argentine soap opera ‘Totalmente,’ while Academy Award-winner Giacobone served as the co-writer of Alejandro G. Iñárritu’s ‘Birdman or (The Unexpected Virtue of Ignorance).’ Therefore, with the veteran screenwriters behind the story, the realism aspect gains prominence through the movie’s absurdity.

In an interview, the lead star Guillermo Francella reminded us that the film is also a nod to the absurd times. The Netflix production tries to encapsulate a vast range of themes – from the ephemerality of fame to the importance of one’s roots. Francella also glossed upon how the culture of cancellation makes someone metamorphose from hero to demon within moments, especially in misdiagnosis cases.

While for the proponents of “cancel culture,” it remains an essential tool for vocalizing dissent, many, including activist Loretta Ross, believed that the act of public shaming is mostly “horizontal.” Ross believes that canceling does not harm people who pose severe threats to society. For her, it is rather a violent outpour at people who mean no harm. 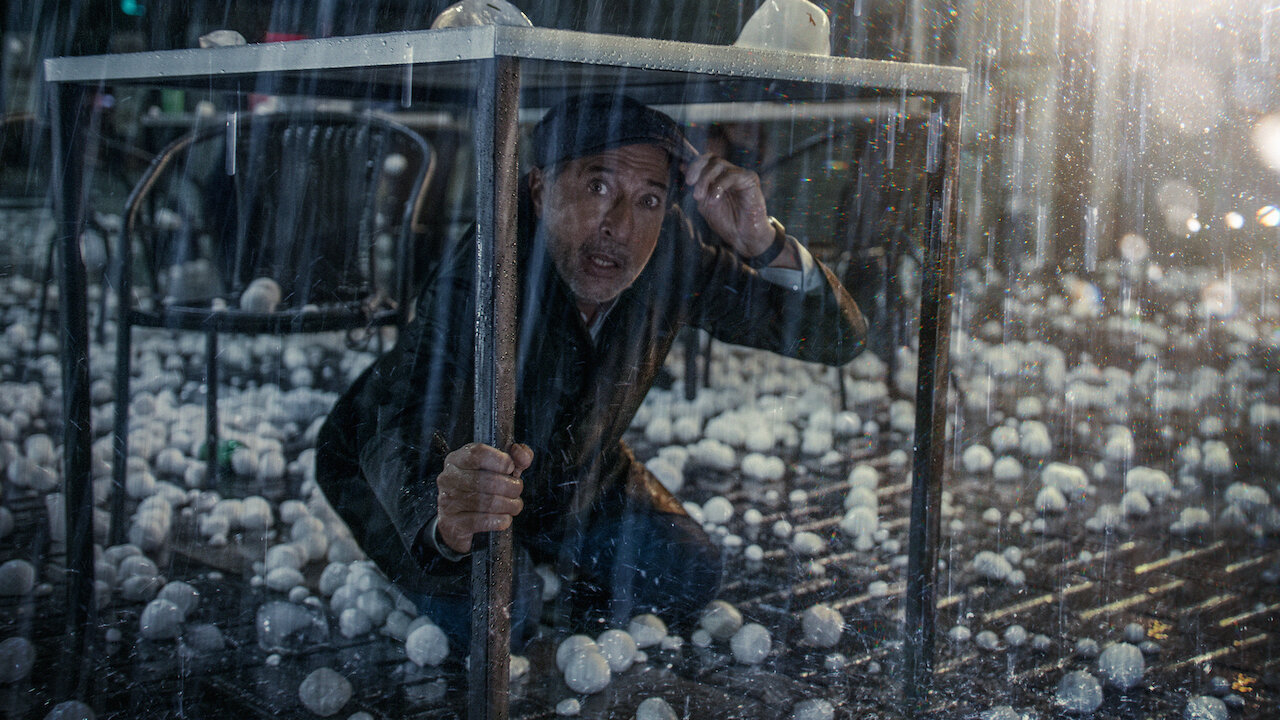 Meanwhile, the hailstorm seen in the film may also have some truth to it. In 2018, the densely populated area of Villa Carlos Paz faced a massive hailstorm. While investigating the aftermath, researchers found a “gargantuan” hail with an estimated measurement of 17 cms (between 7.4 and 9.3 inches), potentially setting a new world record.

Matthew Kumjian, Associate Professor in the Department of Meteorology and Atmosphere Science at Penn State, voiced his excitement at the discovery, saying, “This is the extreme upper end of what you’d expect from hail.” Therefore, although ‘All Hail’ is presented in a beguiling absurdist attire, it is not entirely wrong to infer that the narrative might be slightly inspired by reality.