Where Was Anchorman: The Legend of Ron Burgundy Filmed?

Helmed by Adam McKay of ‘Saturday Night Live’ fame in his directorial debut, the 2004 satirical comedy-drama ‘Anchorman: The Legend of Ron Burgundy’ is known for its star-studded cast ensemble and moments full of silly, infantile laughter. Essentially a tongue-in-cheek take on the 70s news culture, the movie also addresses the gender divide in workplaces. Famous anchorman Ron Burgundy is nothing less than a celebrity at the KVWN channel 4 in San Diego.

Ron meets the beautiful Veronica Corningstone at a party, revealed as his new colleague after their one-night stand. He is jealous of her success, which leads to a hilarious battle of wits between them. Since its release, the movie has attained quite a cult status, thanks to its specific brand of comedy. Most of the story unfolds in San Diego, especially in the newsroom. If you wonder where ‘Anchorman: The Legend of Ron Burgundy’ was filmed, let us take you to the locations.

‘Anchorman: The Legend of Ron Burgundy’ was filmed in its entirety in California, especially in San Diego and Los Angeles County. Principal photography commenced on July 7, 2003, and was wrapped up by September of the same year. Thomas E. Ackerman, the cinematographer of ‘Superhero Movie’ and ‘George of the Jungle,’ joined the production as the director of photography. At the same time, Clayton Hartley, the production designer of ‘Don’t Look Up‘ and ‘Almost Famous,’ came on board as the production designer. Let us now look at the specific filming sites.

‘Anchorman: The Legend of Ron Burgundy’ is set in San Diego, and the cast and crew had to head there to film some scenes. The second-most populous city in California, it showcases one of the most vibrant confluence of cultures. Production took place in Balboa Park, a vast urban cultural park located at 1549 El Prado. The production team also charted the downtown waterfront for some scenes. San Diego has been a popular filming destination since the early heydays of cinema, as depicted in ‘Citizen Kane.’ 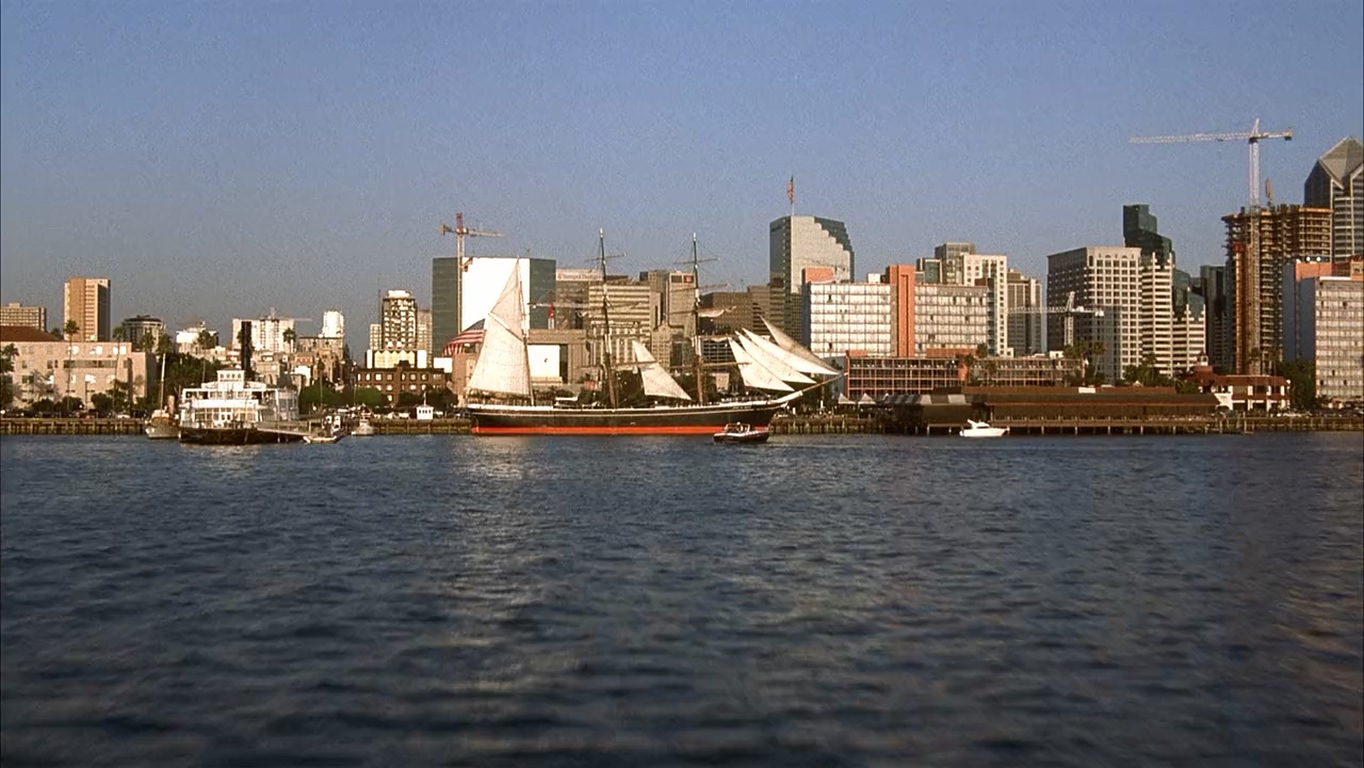 While the movie is set in San Diego, the bulk of filming took place in Los Angeles County, mainly in the Los Angeles, Long Beach, and Glendale metropolises. The San Diego Zoo was recreated in the now abandoned Old Los Angeles Zoo (aka Griffith Park Zoo or Old Zoo), located at 4801 Griffith Park Drive. In the movie, Veronica eats at a restaurant called Escupimos en su Alimento. The name stands for “we spit in your food” in Spanish. The bonkers easter egg set aside; it is needless to say that the restaurant is fictional. 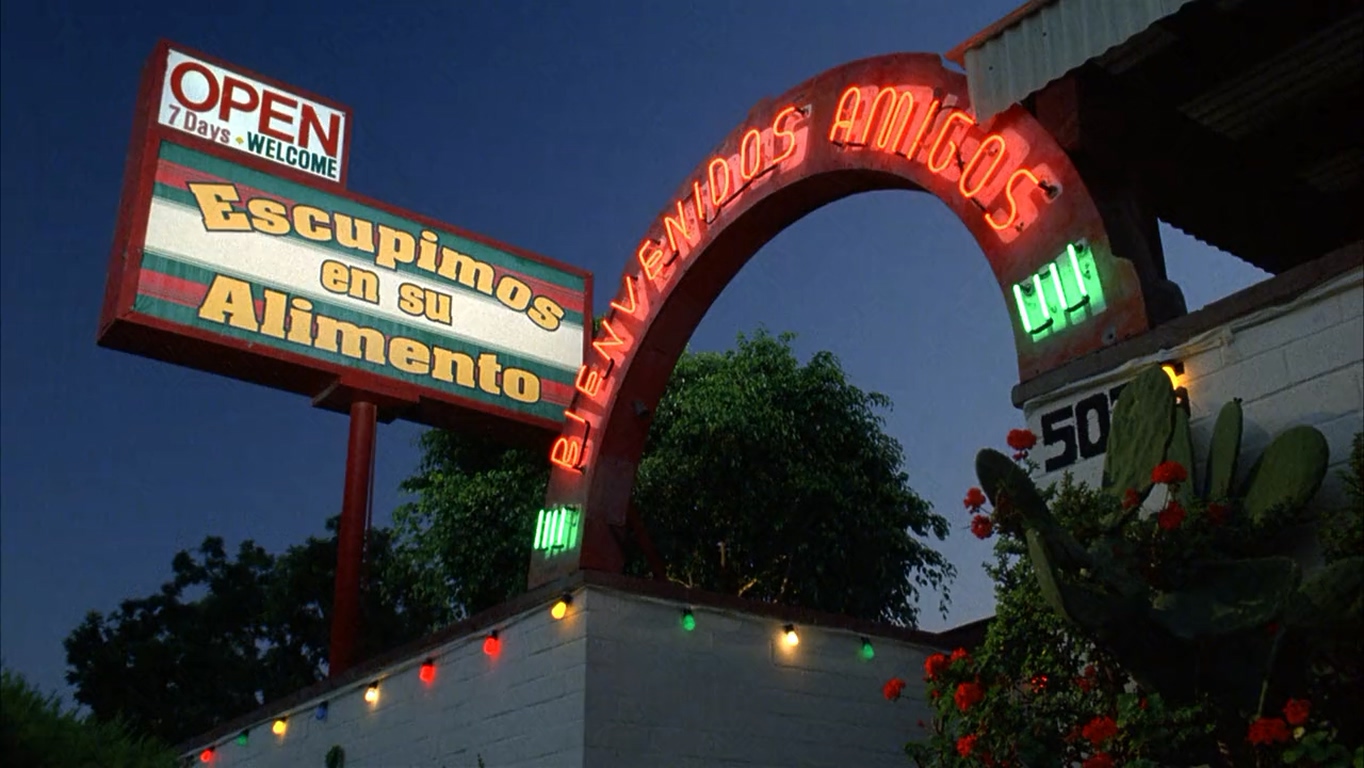 Instead, the scenes were taped at Dresden Room Restaurant, an eatery located at 1760 North Vermont Avenue in the Los Feliz neighborhood of Los Angeles. A nasty battle sequence was filmed at Mateo Street at East 4th Place, beneath the western end of the 4th Street Bridge, east of downtown Los Angeles. In another scene, the protagonist gets snubbed by his old companions at West 6th Street, between South Mesa and South Centre Streets, in the San Pedro neighborhood of the City of Angels. 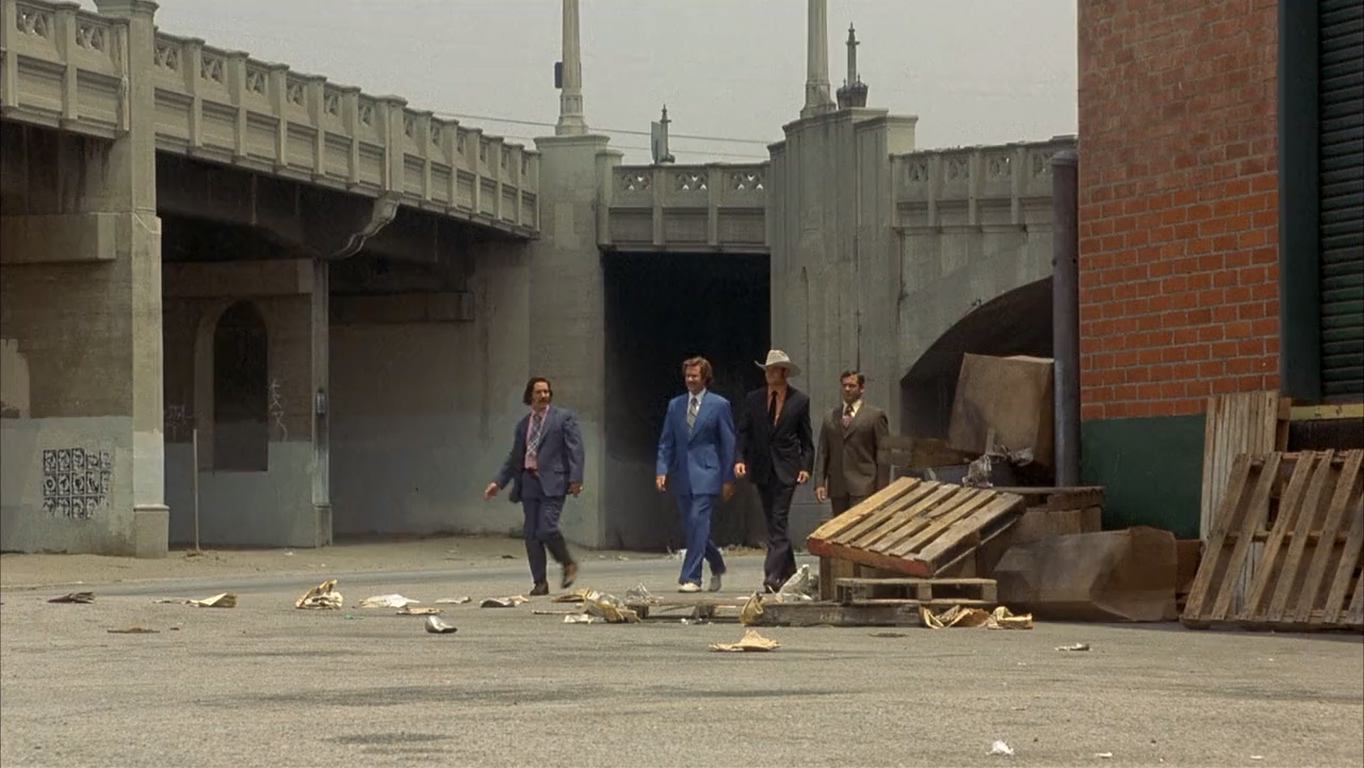 Ron’s chopper lands in front of the fictional Esquire Hotel in the opening sequence. However, the scenes were lensed in front of the cylindrical International Tower, located at 700 East Ocean Boulevard in the community of Long Beach. From ‘Lethal Weapon‘ to ‘Gone In 60 Seconds,’ many movies have showcased the iconic tower. Some more scenes of the Esquire Hotel were lensed at Long Beach Towers Apartments, a towering residential complex located at 600 East Ocean Boulevard. 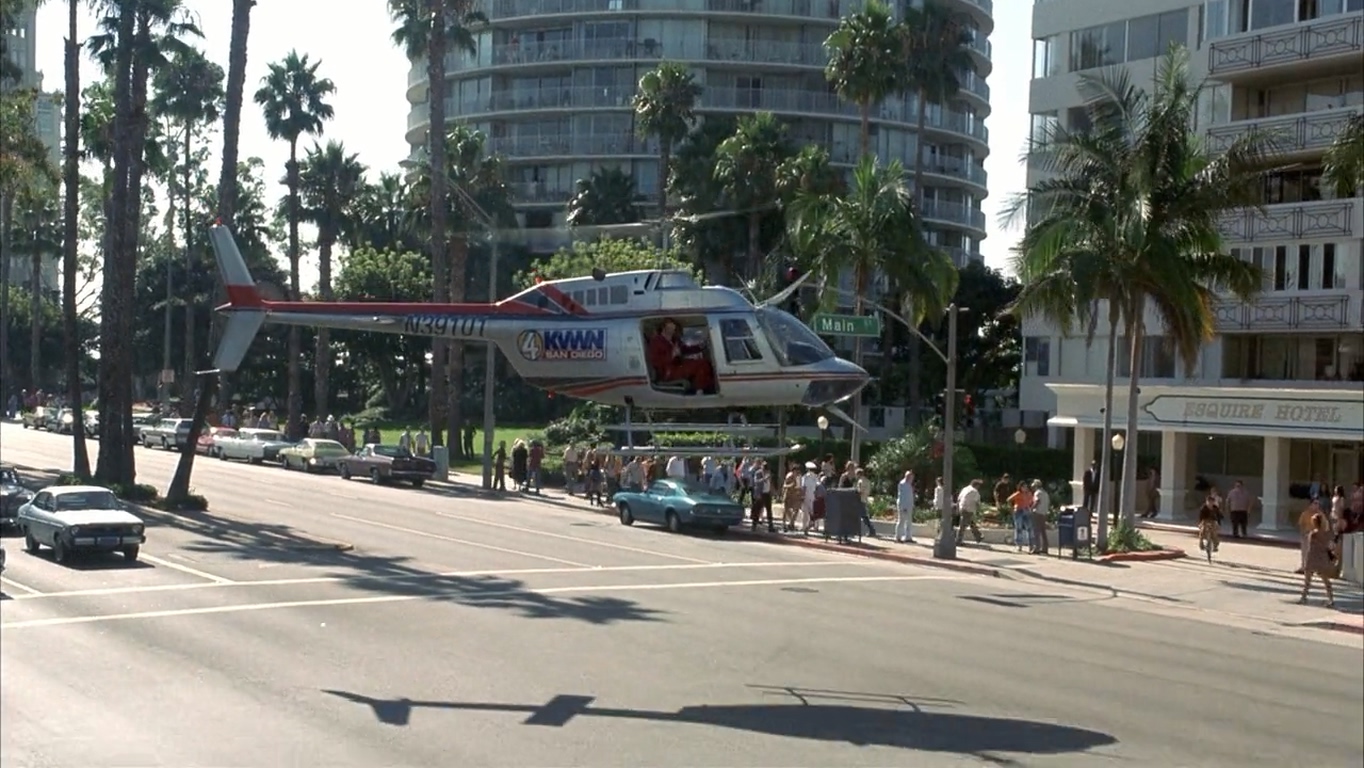 In the following sequence, the news team collides with their rivals at Channel 9. This segment was filmed at Shoreline Aquatic Park, a fun public amusement park in the Long Beach municipality. Filming also went underway on Atlantic Avenue in Long Beach. Ron’s encounter with the furious biker is supposed to occur at San Diego-Coronado Bay Bridge. The sequence was captured instead Queensway Bridge, a 1600 meters long Girder bridge south of Long Beach. 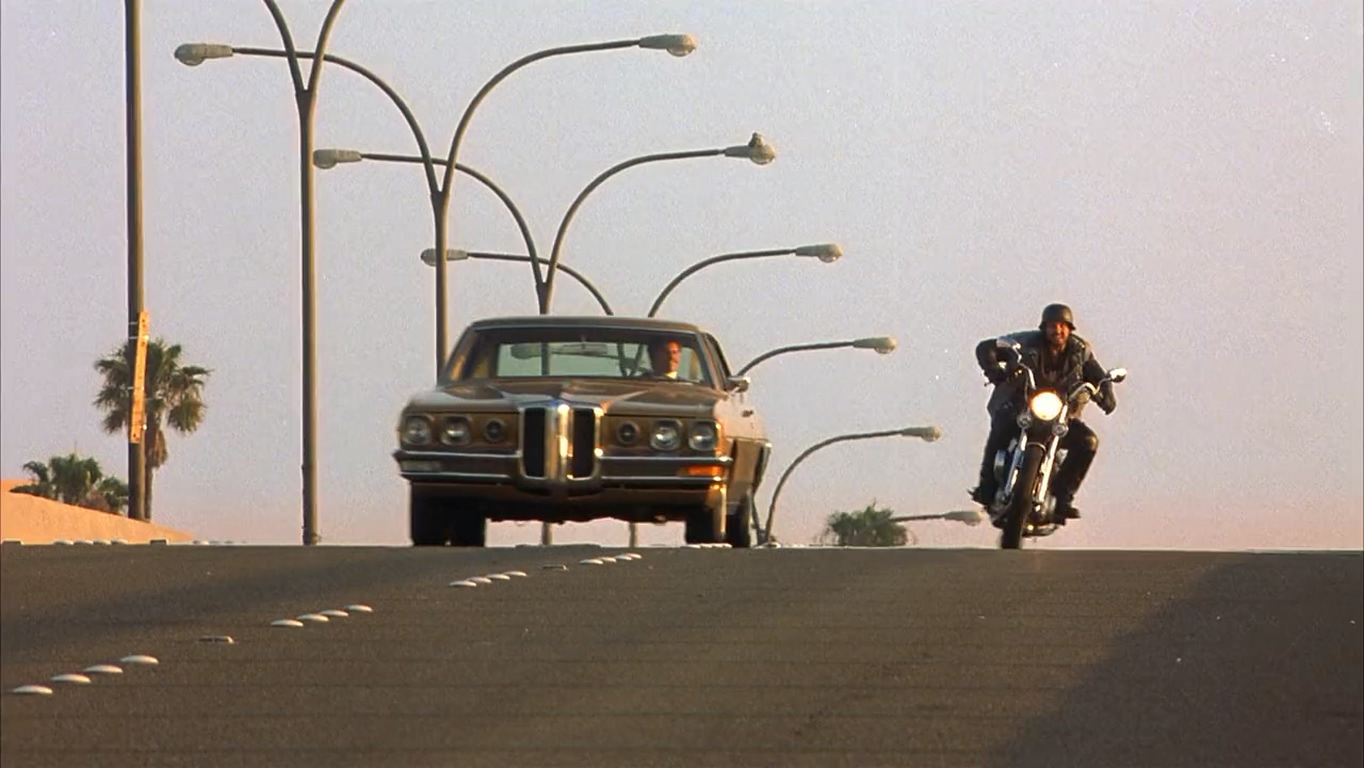 The cast and crew filmed additional scenes at RMS Queen Mary, a historic 3-star hotel located at 1126 Queens Highway in Long Beach, and Parker’s Lighthouse, a bustling seafood restaurant located at 435 Shoreline Village Drive in the Shoreline Village neighborhood. However, a crucial section of the movie was lensed in Glendale, the San Fernando Valley city in Los Angeles County. For the Channel 4 newsroom, the production team used the facility of Seeley Furniture Warehouse, a warehouse located at 1800 South Brand Boulevard in Glendale.