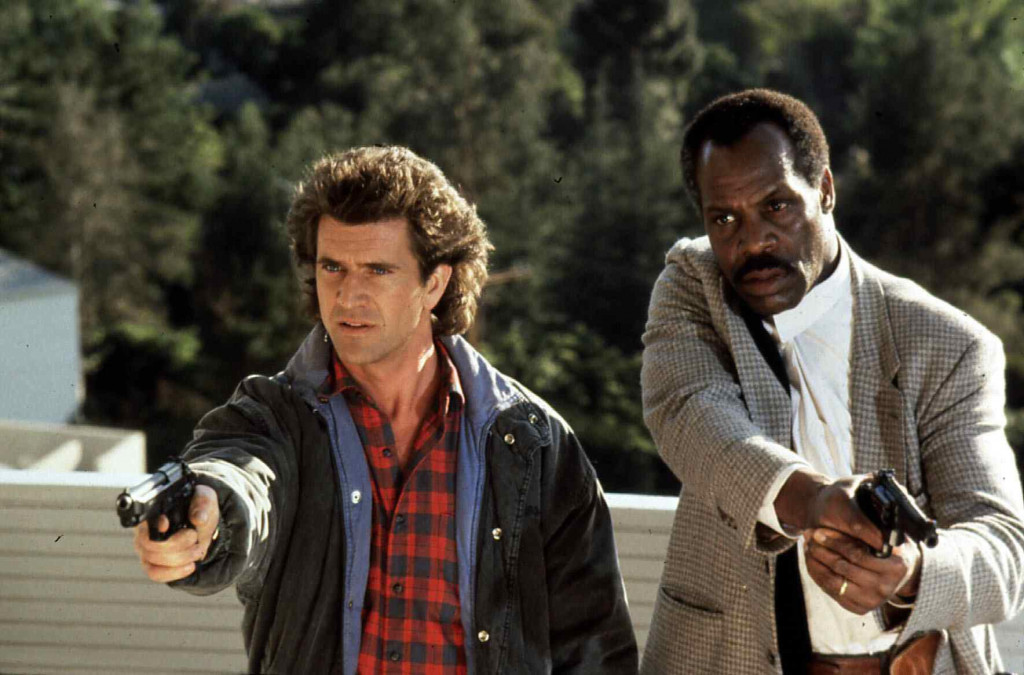 Every superstar has a film in their career that shot them to stardom overnight; the one film that became a milestone in their career. For Mel Gibson, ‘Lethal Weapon’ is one such film. Even though his breakout role had come way earlier in the form of ‘Mad Max’, it was ‘Lethal Weapon’ that brought him in league with the best in business. A massive box-office success, the film’s popularity led the filmmakers to give it three more sequels. It also got its very own video game and in 2016, a television series of the same name began airing on Fox. If you haven’t yet seen it, then you shouldn’t go any further than the summary of the plot. If you enjoy buddy cop films and action movies that have a hint of comedy, then you should totally go for it. It is highly entertaining and has some good action sequences. 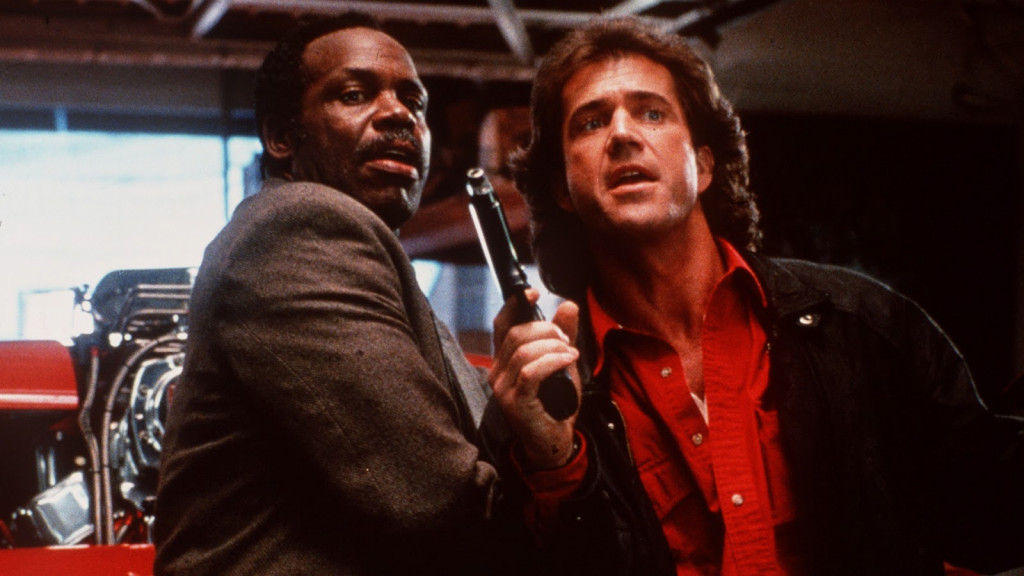 The film begins with a young woman (Jackie Swanson) jumping to death from the balcony of her room. The next morning, we watch Roger Murtaugh (Danny Glover) starting out his day, which happens to be his birthday, with his family. A couple of things we learn is that his wife isn’t really a good cook; he is losing grasp of his eldest daughter because she is a teenager now and that he has turned fifty, which officially makes him “too old for the upcoming sh*t”.

While Murtaugh is a wholesome family man, Martin Riggs (Mel Gibson) presents the image of a certified loner. He lives in a trailer with his dog and doesn’t have any organization in his life. It doesn’t take much time for us to figure out that he is suicidal. He recently lost his wife and hasn’t yet been able to make his peace with it. The psychologist at the station wants him to be sent on a mandatory leave but his superiors aren’t ready to do that.

However, after an incident where he got very close to getting himself killed, Riggs is reassigned to the homicide division, where he is partnered up with a reluctant Murtaugh. They begin investigating the case of the dead girl, but then, it comes to Murtaugh’s notice that she is the daughter of one of his Vietnam buddies, Michael Hunsaker (Tom Atkins). What seems like a simple open and shut case slowly begins to unravel into a bigger conspiracy. Hunsaker is hiding something from the cops and the reason is that these are people in high places who will not hesitate to kill the cops as well. 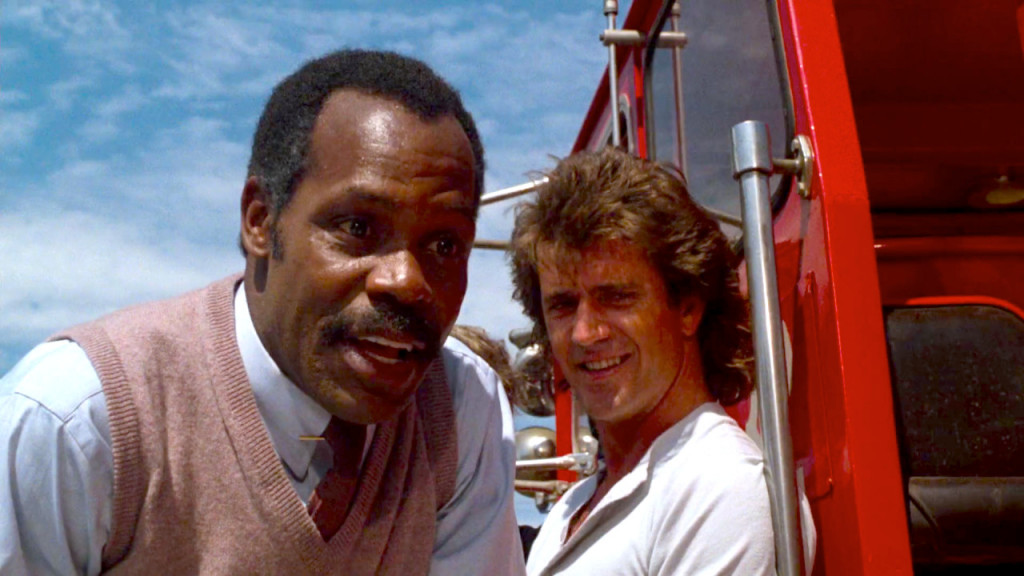 ‘Lethal Weapon’ is remembered for a lot of things. From Gibson and Glover’s chemistry, their subtle comedy, a handful of witty dialogues (“Let’s get the flock out of here” cracks me up every time!), being a smashing box-office hit, to reportedly being the first film to feature a modern cell-phone, this film gives you a lot to talk about. But that isn’t the end of it. As seriously as it takes the responsibility of entertaining the audience, it also displays the talent of the writers to slip in subtle social messages. Riggs’ depression and drug abuse by young people are definitely amongst them. Hunsaker’s involvement in illegal trade that eventually leads to the death of his daughter also counts as a message for you to be careful about what you get yourself into. But all of that is pretty forward.

A couple of things are so subtly included in some scenes that it becomes a blink and miss sort of thing. While talking to the children on the other side of the street from Dixie’s house, young Alfred says “Mama says policemen shoot black people”. The film was released in 1987, if you need reminding. Mind you, they ask this question from a black policeman and he doesn’t know how to answer that. On thin ice, Murtaugh! “Very thin.” Another message sneaked into the film was in the last scene, where Joshua makes his way inside Murtaugh’s house. He passes through the refrigerator on which we see the poster of “Free South Africa. End Apartheid”. Did you catch anything else? 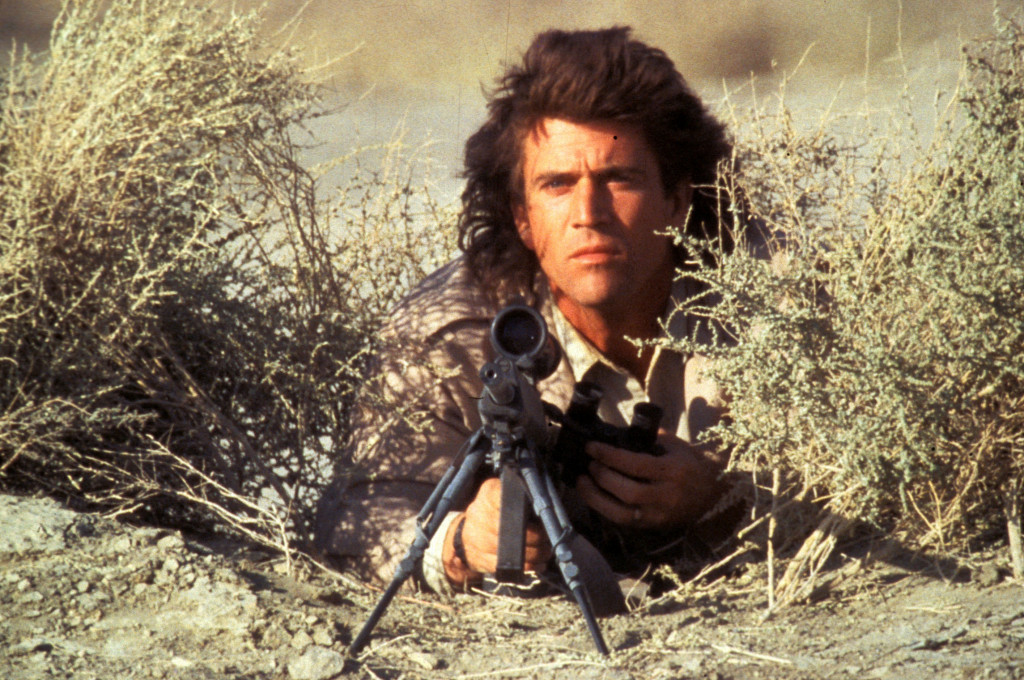 After freeing themselves from their captors, Riggs, Murtaugh and his daughter make their way out of the place, which actually turns out to be a place under a bar. Finding themselves in the middle of the busy LA road, Riggs goes after Joshua while Murtaugh comes face to face with McAllister. The mob boss meets his end by driving right into the busy road in an attempt to run over Murtaugh. You might not want any driving lessons from him! A bus hits the car and it is completely demolished. The cocaine in the car begins to burn and everyone in its vicinity gets high. Even Riggs takes Murtaugh away so that they don’t start seeing “pink elephants”.

With McAllister gone, you’d think their troubles were over, but Joshua had slipped away and Murtaugh knows exactly where he’d be heading. In an attempt to get his revenge, he breaks inside Murtaugh’s house. But the cops thought ahead and already got the family out of the house. Being the good guys, they even left a note for Joshua. Just so he wouldn’t have any trouble understanding, they crash a car inside the house and finally arrest him. But Riggs has other plans. He invites him to fight it out and prove who’s better, once and for all. The fight sequence ends with Riggs winning, but then Joshua gets hold of a cop’s gun; both Murtaugh and Riggs shoot him simultaneously. The film ends with Riggs visiting his wife’s grave and then going to Murtaugh’s house to gift him the bullet that he had saved for himself, saying that he doesn’t need it anymore, meaning he has won over his depression and won’t be trying to kill himself anymore.

Alternate Ending: How Different It Could Have Been 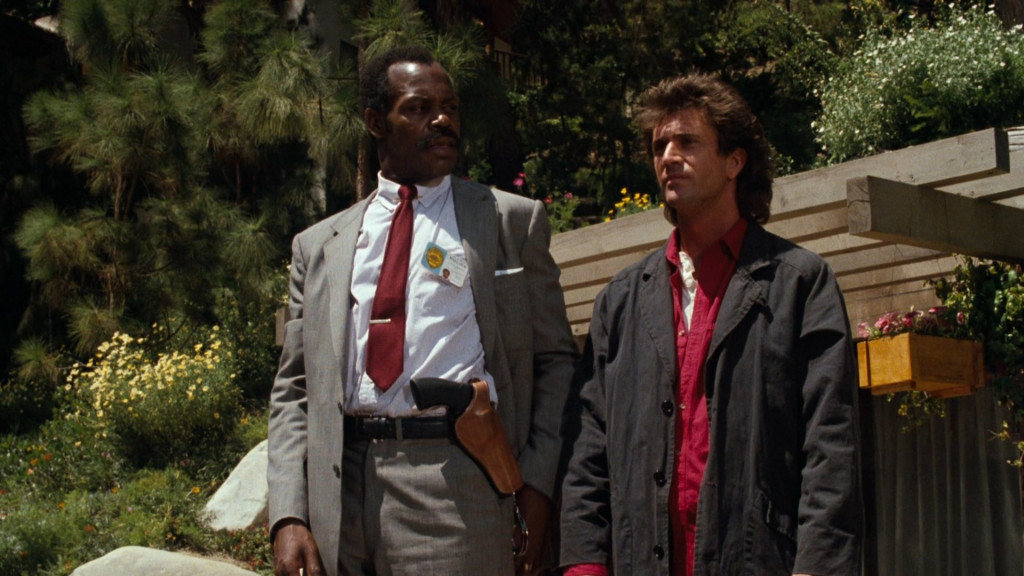 The best thing that worked in favour of ‘Lethal Weapon’ was the chemistry of its lead characters. Fun, quirky and action-packed, what more could one want from an entertaining film? The subtle humour and effortless charm kept the audience glued to it and it is this tone that continued in the following three sequels. But when writer Shane Black first thought of this story, he had more action and a darker storyline planned for the characters. Whatever chemistry he had in mind for Murtagh and Riggs, it wasn’t supposed to be so funny.

However, we wouldn’t have seen that alternate version in any case because even Black didn’t like it in the end. It wasn’t until the second or third draft that he started proposing the script to various studios. More changes were enforced once Warner Bros. got involved. With Mel Gibson and Danny Glover’s casting, the deal was sealed and everyone knew that with their chemistry, making the story too dark wouldn’t work. A lot of changes were made in the portrayal of their characters and some major, and rather creative, action scenes were cut down as well.

The characters of Riggs and Murtaugh were to be haunted by their time in the war. For Murtaugh, it was to be the one incident which has never left the back of his mind. His dreams are taken over by the memory of killing a man with his bare hands. For Riggs, the backstory was to show him as an assassin who had worked for the CIA. This would have further suggested his expertise as a sniper and in combat, which eventually was shown as him being the part of Special Forces. Both of their experiences had taken a psychological toll on them and their actions were influenced by that. Murtaugh was let go of this particular darkness, and in the film, not much was focused on his time in Vietnam. For Riggs, the death of his wife became the thing that drove him to the verge of committing suicide. 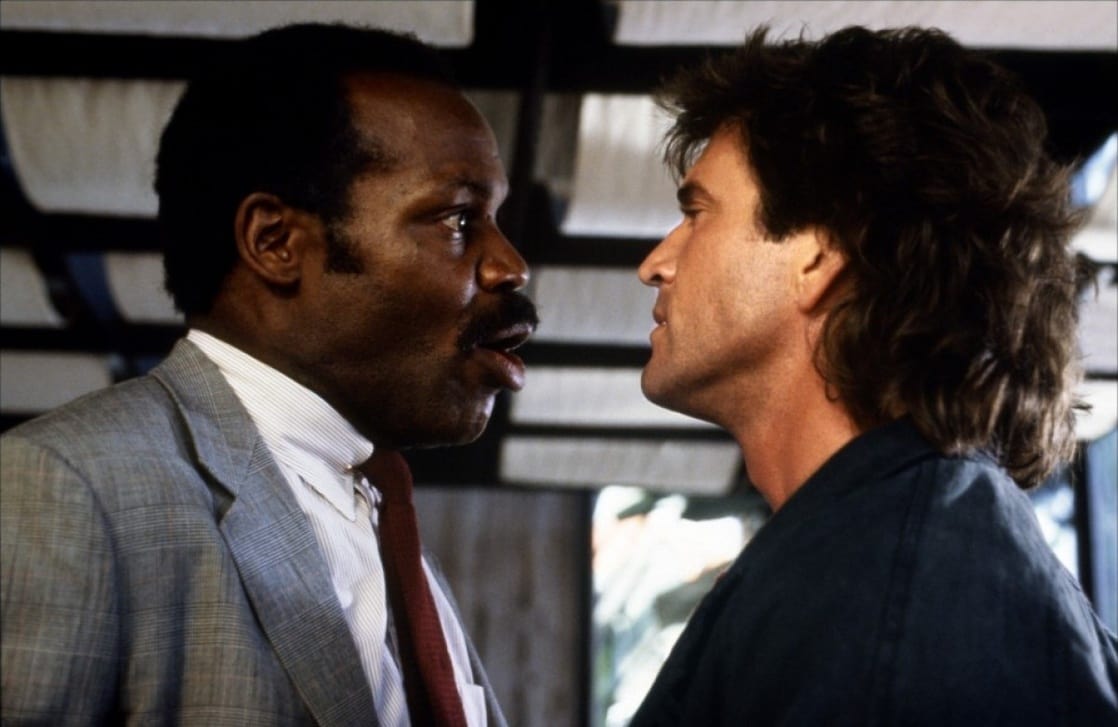 Black had written some intense action scenes in the first draft. One of those was to be a car chase scene at the end, where one of the bad guys was supposed to drive a truck full of cocaine. Riggs would blow it up using a rocket launcher and the whole cocaine was to rain over the Hollywood sign. That paints a pretty picture and sounds exciting. Unfortunately for us, it was scraped from the final version of the script. Another scene was supposed to feature a sniper attack. Riggs would follow and take down a sniper who had been shooting at children. A child’s dead body was to be a part of the scene, to further add to the intensity. However, gladly, they decided against it. Instead, we just got the funny scene where Murtaugh and Riggs interrogate the children. Speaking of the fight sequences, the last one, where Riggs and Joshua combat it out in Murtaugh’s front lawn, was supposed to be about four minutes longer. Four whole minutes! Imagine the amount of action that was taken away from us.

There were a couple of other scenes featuring Riggs that were clipped from the final cut. The introductory scene was to take place in a bar where he would be heavily drunk. When a small argument escalates into a brawl, Riggs beats the hell out of those people. The writer decided not to give that entry to Riggs because he didn’t want people to “judge him before they got a chance to know him”. Of course, it would have portrayed his image as a violent man, without us knowing what motivates him. In one of the versions, he would get into a fight with a couple of men he’d catch tormenting a dog. That would have been totally justified. Why didn’t they start with that!

The most painful thing in Riggs’ life is the death of his wife. This further becomes a plot point in the following film. We see him mostly lonely, only a trigger away from killing himself. Thank god, he had the dog! Another scene, had it made the final cut, would have further emphasized on his loneliness. In this scene, Riggs hires a prostitute, takes her to his trailer and watches a movie with her. The lack of companionship could have served as a contrast to the ending where he finally becomes friends with Murtaugh and has dinner with his family. The final scene was supposed to have another conversation between the partners. Throughout the film, we see that Murtaugh is starting to get conscious of his age and the toll his job is beginning to take on him. He does seem “too old for this sh*t”. After the whole debacle, he begins to wonder if it’s time for him to retire now. In the end, Riggs tells him not to.