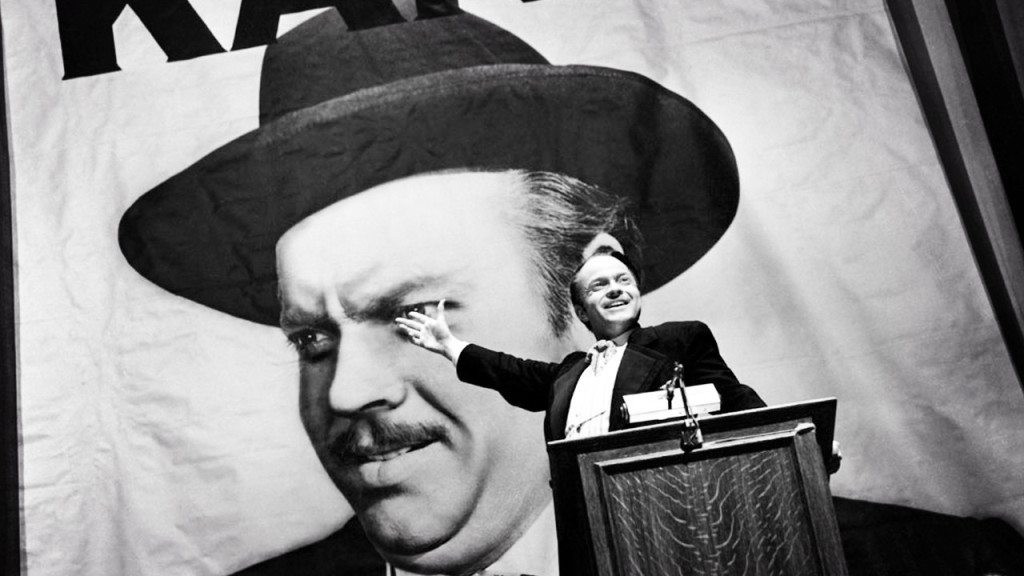 This was not the easiest list to compile, because I haven’t really seen another film like ‘Citizen Kane’. Often cited as the greatest piece of cinema ever made, its ultimate messages are sparse, diverse, and exceptionally related to both man as a microscopic element of society and the society itself at large. It talks of corruption, confidence, growth, romance, and hierarchy, but in the end, we come to realize, along with the title character himself, that none of these things matter, because in his attempts to attain the status he has, what he’s forgone is simply too big a miss, and too striking a failure to ignore. ‘Citizen Kane’ is one of my favorite films of all time, and I haven’t seen a movie I can say is a worthy equal to it (in terms of handling of themes) yet; and therefore, this list will contain titles of features that give either the feel (in essence) of the Orson Welles-starrer, or have narrative connections to the picture in the way they communicate their subject matter. I would strongly recommend these movies similar to ‘Citizen Kane’. You can watch several of these movies like ‘Citizen Kane’ on Netflix, Hulu or Amazon Prime. 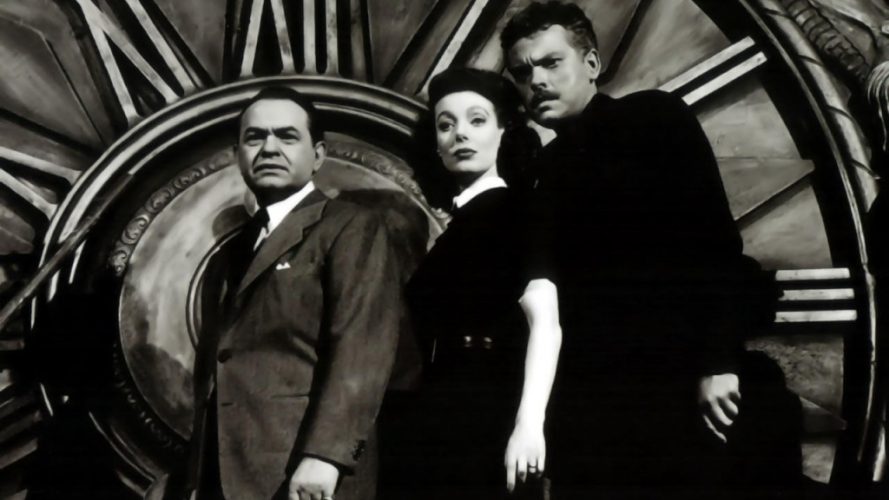 This is the only Orson Welles-directed film on this list, and the reason as to why I’ve included it on here is simply the fact that I find it to be an underrated work of his that perfectly understands his cinematic intentions, though it isn’t as well-realized as ‘Citizen Kane’. I first made an attempt to watch Welles’ third attempt at filmmaking solely because I adored Loretta Young, the exceptionally talented golden-age actress, in every other motion picture I’d seen of her’s. The film-noir mystery is able to stand out amongst the rest of its creator’s works because of excellent direction, cold, hard lighting, and powerhouse performances. Though the story is intriguing, following the mysterious beginnings of a strange authoritative character (played by Welles himself), it loses its spark halfway with its confused interpretation of the subconscious. Thankfully, it makes up for all that with its spine-chilling climax, which made me freeze with tension.

I’m just gonna say it – ‘Barry Lyndon’ is my favorite film of all time. Stanley Kubrick’s period-drama thematically presents me with my biggest fear: the subsequent downfall from success. It is impossible to spoil this film for anyone, as there is quite literally nothing to spoil. The essence of this art-piece lies in its silence, though when the narrator speaks, I’d rather hear nothing else. ‘Barry Lyndon’ is concerned with the rise and fall of an 18th-century Irish lad, partly because of his lack of understanding of the power he holds in his hands, and partly because of his ever-rising greed. In a lot of ways the perfect character study, the picture details the life and times of a highly authentic England from a time gone by, and though it is filmed with this cold, distant eye, it grips you emotionally with the way it presents its characters in situations wherein their enemies become tradition, ego, wealth, and a want for permanence. I believe that there is no film that sends a message as beautifully as this one does (that final title card makes a bit of the difference for me), neither is there one that makes me think, that makes me feel, to the degree that this masterpiece has affected me. 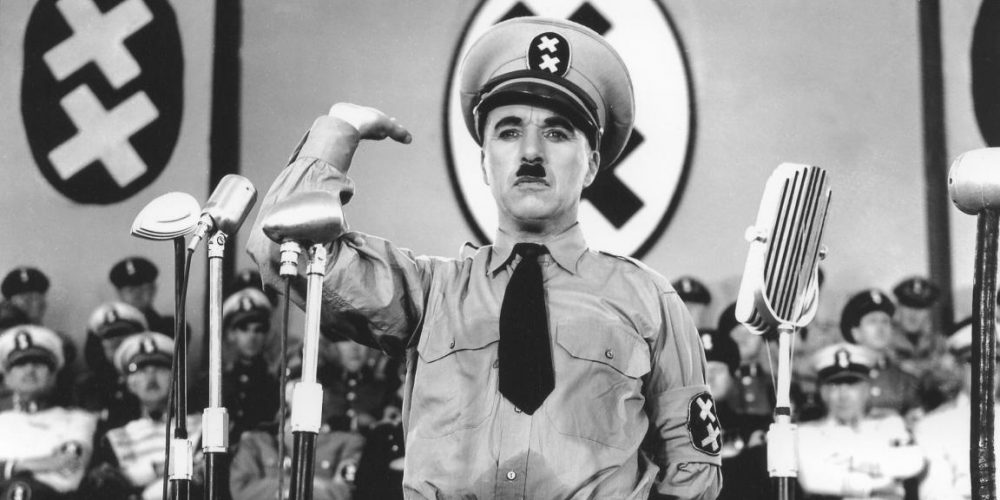 Charlie Chaplin’s masterful political satire has a speech at the end that may as well be the greatest monologue of all time: “we think too much and feel too little”. To present dynamics related to class, power, and status, the legendary filmmaker chooses a barber siding with the everyman, while on the opposite end stands the most brutal dictator this world has ever known. Several iconic scenes from the picture come to mind when I think of examples wherein it plays with power and a lack thereof – the moment with the inflatable globe being my favorite of the lot. I do think that parts of the film have dated considerably, but its message still stands, and its attempt at understanding world order is worthy of appreciation. 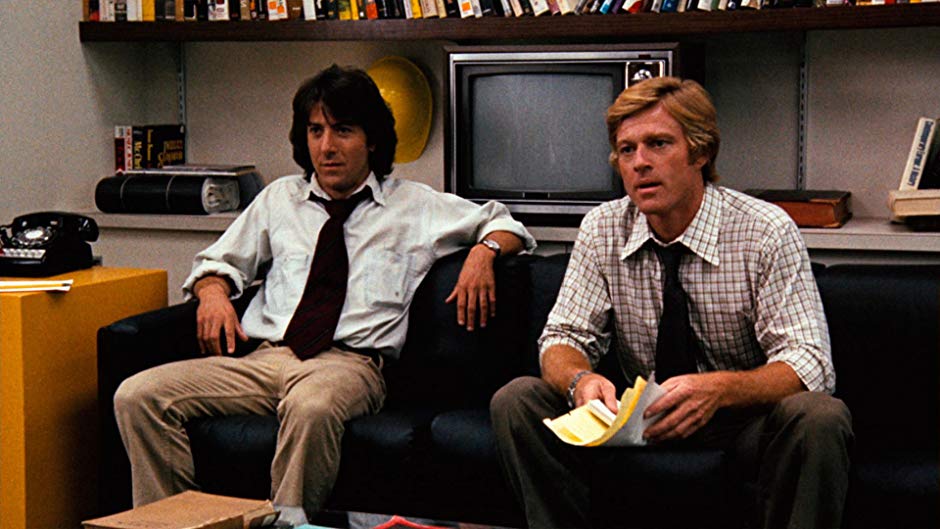 The world of informatory media – whether visual or in writing – has been the subject of several great films, and ‘All the President’s Men’ is one of the very best of its kind. Alan J. Pakula films the sensational tale with marvelous patience and quietness, almost in the form of a documentary, with bits of imagined storytelling devices thrown in to keep the picture exciting to the extent of its runtime. The film presents a puzzle that interests its audience because of the authenticity that is layered over the tabletop mystery, and Robert Redford and Dustin Hoffman give two of the most involving performances in American film history, further making this film a considerably essential watch. 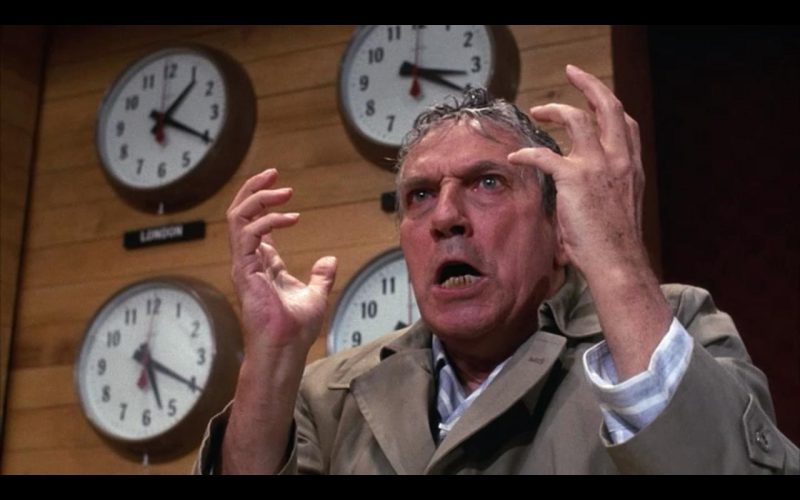 Released in a time when news wasn’t merely created out of thin air (admittedly there was a lot going on then for anyone to waste their time imagining fake happenings for something as prestigious as cable TV), ‘Network’ managed to smartly carve out what is evident today with a lot of reality programs using its story of a network exploiting the depressed and unstable mind of an angry, aged ex-TV anchor, for its own financial gain, successfully making the charts unbeknownst to the man, who does what he does because he truly thinks there is truth behind his words, and because he believes that there are people listening to him. A wonderful story of what was once a fear, and what could very well be a possible reality for us (or already has been somewhere) in the years to come. Absolutely terrifying.

Probably the best thing about ‘The Wolf of Wall Street’ is that it doesn’t preach. As a viewer, it does demand you to relate to the bad guy, forcing you to put yourself in his shoes, see the world from his point of view, and justify the things he does with no apparent reason other than the fact that he is the protagonist. Belfort’s drug-fueled antics first amuse you, then disgust you. You’re left to figure it out yourself, nobody tells you that. You don’t get to hear sermons about what’s right and what’s wrong, though you’re watching something that clearly defines the actions carried out as evil. Throw into this over-the-top and perverse picture some excellent comedic writing, and you’ve got yourself a solid Scorsese flick. I’m not the biggest fan of the picture, I do have my problems with it, but I can’t help admire the effort that has been put into its realization. 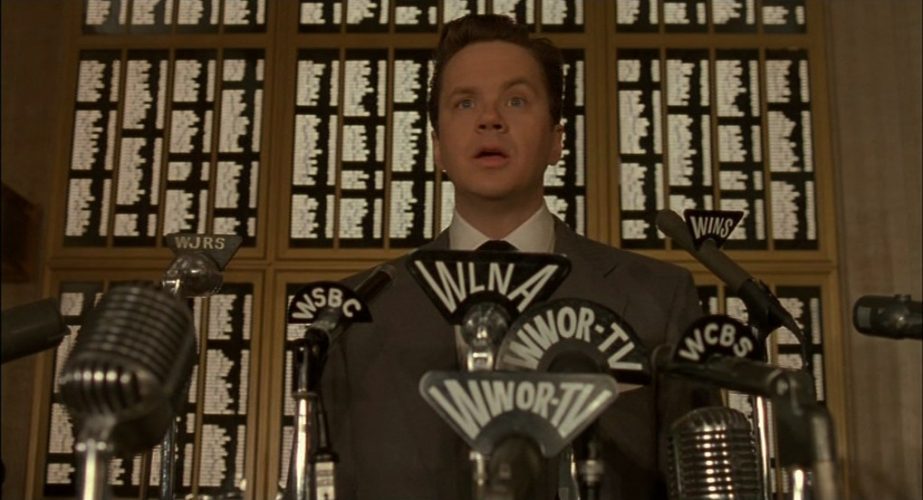 ‘The Hudsucker Proxy’ finds its relevance on this list since it is an attempt at recreating the typical filmmaking styles that were considered mainstream in the opening half of the 21st century. It is a screwball comedy about corporate corruption wherein Tim Robbins is put in charge of a company following the suicide of its owner, though – or to be more precise, exactly because – he is nothing short of a dummy, oblivious to the fact that he is being used by the board of directors so that they can purchase stocks in the firm for a lower price. It’s one of the Coen brothers’ most underrated movies, and its worthy of your attention solely for how unique it is in their filmography, incorporating a style so cold and comedy that’s unabashedly hilarious. 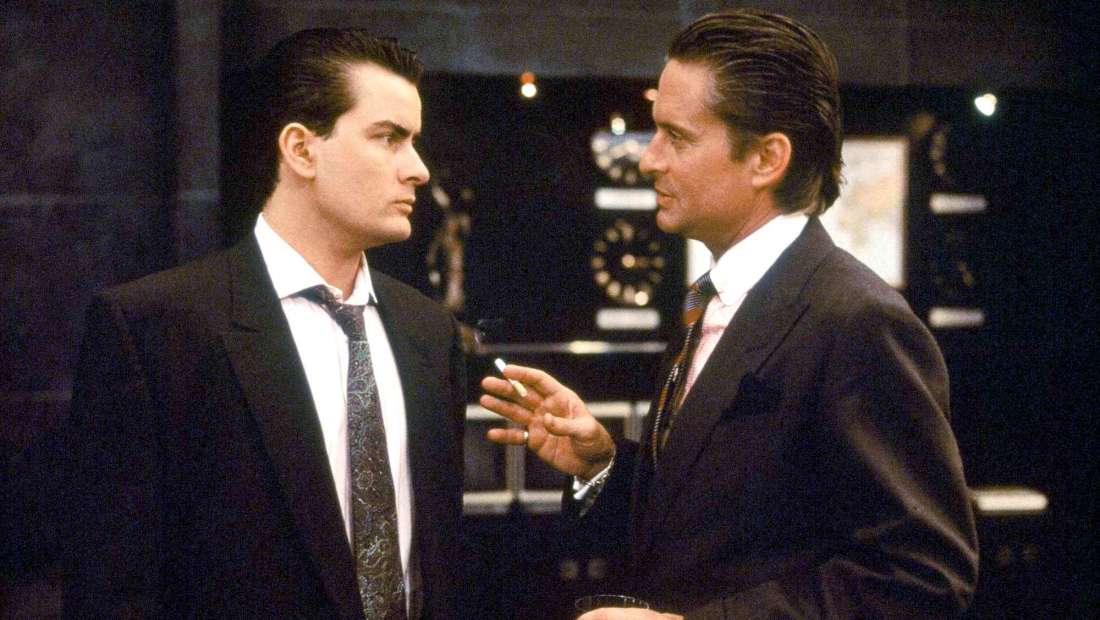 Perhaps the most important theme followed in ‘Citizen Kane’, that ultimately makes all the difference in those final moments, is the detailing of the key separations of humanity, desire, nostalgia, and zest from success, fame, popularity, and wealth. Bud Fox, the protagonist of ‘Wall Street’ is a young man caught in the middle of two polarizing schools of thought, one from his father, who regards moral values above any business motive, and has attempted to bring up his son as a valuable and reliable part of society, sometimes feeding him ideas to publish in his credit; while on the other end are the thoughts and practices of his mentor, who pushes Bud into quick success, inspiring him in ways that would disregard and therefore oppose the values of his father, leaving Bud to make final decisions regarding ethics and wealth for himself, by carefully weeding out the pros and cons of the arguments at hand. 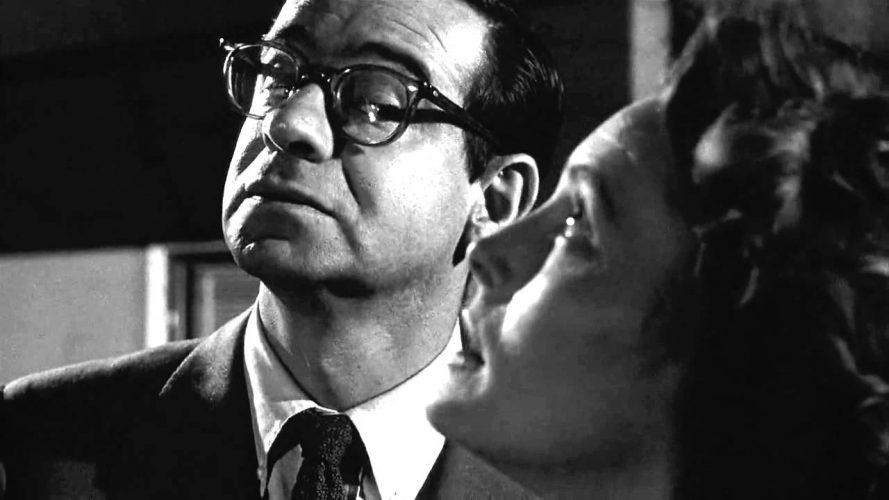 A friend of mine, in his review of this film, said it best: ‘A Face in the Crowd’ unravels slowly to show the machinations of the human mind, or to be more precise, one that is corrupted by the marriage of fame and jealousy. This picture, through its characters, tells a very personal rags-to-riches story, but thanks to its ingenious backing in the screenwriting department, it further offers a parodical insight into the societal system that gatekeeps our civility. Andy Griffith plays the role of Larry Rhodes, a bum with little success to his name (if you can call it that) who lives solely for himself, and the film showcases his rise to popularity among the masses as a supposed voice for their troubles, after a woman is charmed by his persona upon a meetup. The picture is concerned with the effect that this sudden distinction as an ‘identified personality’ has on an otherwise live-off-the-street nobody.

Wealth and fame are elements that can drive a man down south if he fails to negotiate his transactions with a thoughtful mind. Perhaps one the best examples of the total disregard to the aforementioned ideology is the subject matter to this film, about a successful, authoritative newspaper journalist who hires a press-agent to perform his dirty work by taking care of (in the morbid sense) his sister’s lover, a man who is introduced to the audience as well-mannered, responsible, and kind. The film clearly carves out the basis of its understanding of morality, as well as the lack thereof, and due to this, fails in captivating me with its obvious attempt at maintaining realism. Still, the cold direction, menacing performances, and commendable direction leave me wanting to praise the feature more than criticize it.