Where Was Eat Pray Love Filmed? 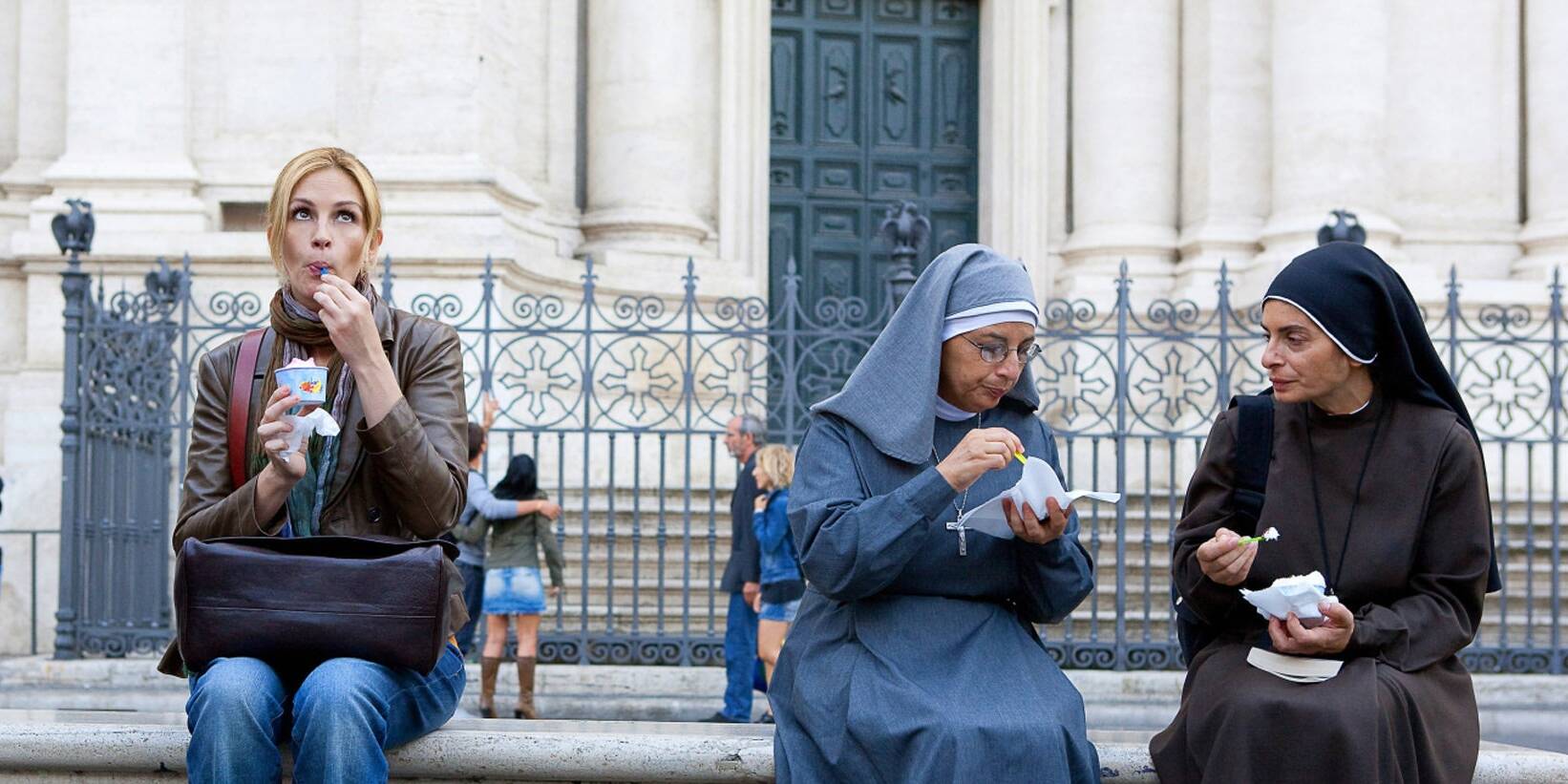 ‘Eat Pray Love’ follows Elizabeth Gilbert (Julia Roberts), who realizes that she needs to make significant changes in her life, starting with her unhappy marriage. After a divorce, she takes off on a journey around the world to discover herself. The three meaningful experiences in her travel take place in Italy, India, and Indonesia, where she discovers the pleasures of eating, praying, and true love. A few locations in these countries saw a significant increase in the number of tourists after this film’s release. Surely, many of you may want to know where the movie was filmed. Here is everything we know!

‘Eat Pray Love’ was filmed in four countries: the USA, Italy, India, and Indonesia. The biographical movie is based on the book of the same name by Elizabeth Gilbert. Here are the details of the filming locations!

The incredible journey across the globe begins when Liz from New York decides to make essential life decisions. The film features several locations in Brooklyn and Manhattan. Several scenes show Liz going around the city and meeting David and her friend, Delia. These scenes were filmed at Walker Street, Tompkins Square Park, Manhattan Bridge, and Bowery & East 4th Street in Manhattan. One of the scenes between Liz and David was also filmed outside a building on 244 East 5th Street and 2nd Avenue, Manhattan. 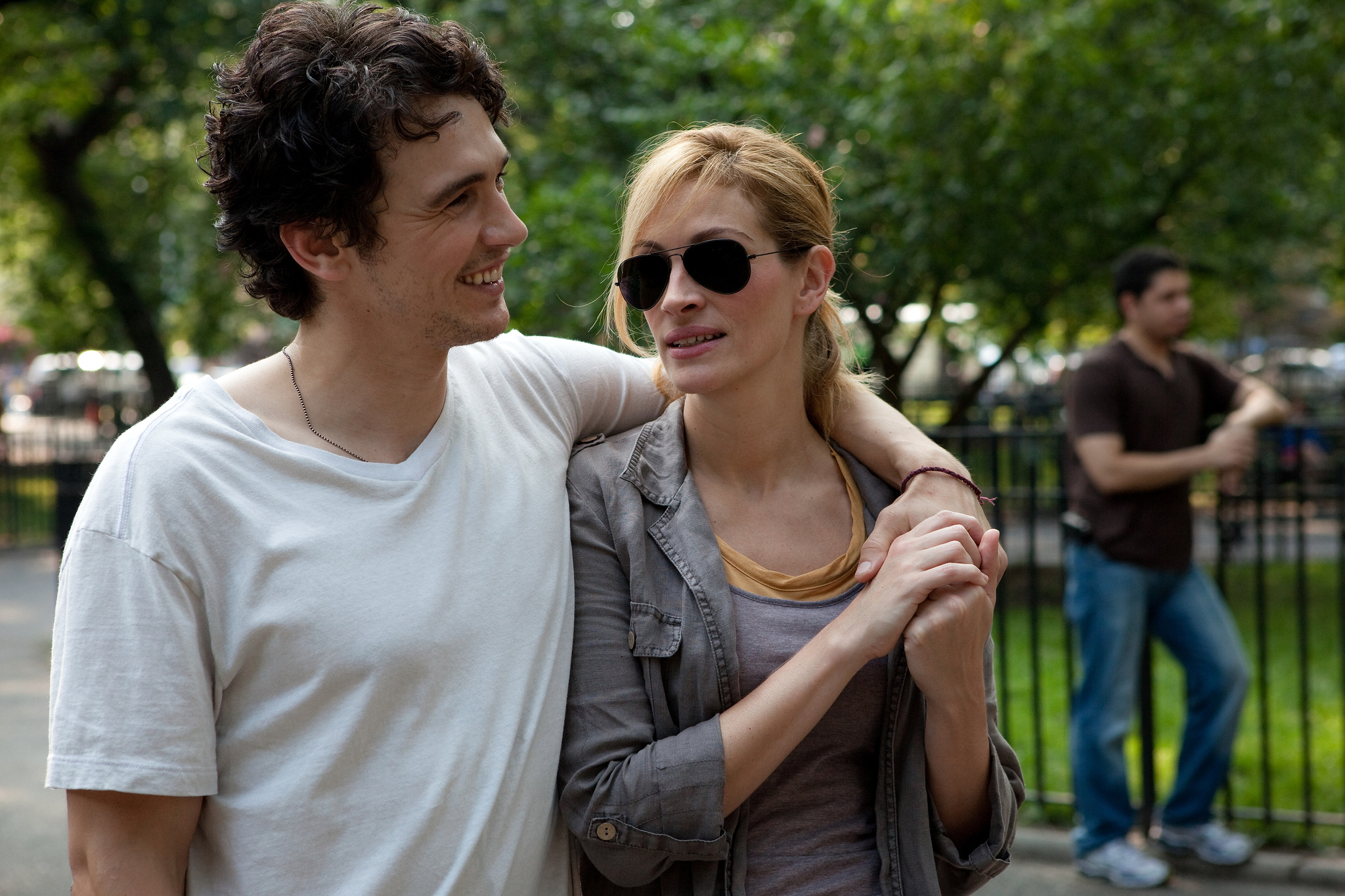 Several locations in Brooklyn served as a filming site, including Cobble Hill, Book Court on 163 Court Street called Book Court, and Smith Laundromat on 137 Smith Street and Dean Street. Another scene between Liz and David was filmed at the Robin Des Bois Cafe on 195 Smith Street and Warren Street.

Rome is the primary Italian location for the “Eat” portion of this film. Castel Sant’Angelo, located on the River Tiber near The Vatican, is known to offer one of the best views of Rome. This is where Liz looks over the city and contemplates the new phase in her life. Liz’s time in Rome mostly revolves around the Piazza Navona.

The exterior shots of her apartment were filmed at 18 Via dei Portoghesi. Other filming locations in the area are Sant’Agnese in Agone, Fontana dei Quattro Fiumi, and Via dell’ Orso. The cafe where Liz meets Sofi is also located there. Several restaurants, such as Antica Trattoria Della Pace, Osteria Dell’Antiquario, and Restaurant Saint Lucia, feature in the movie. 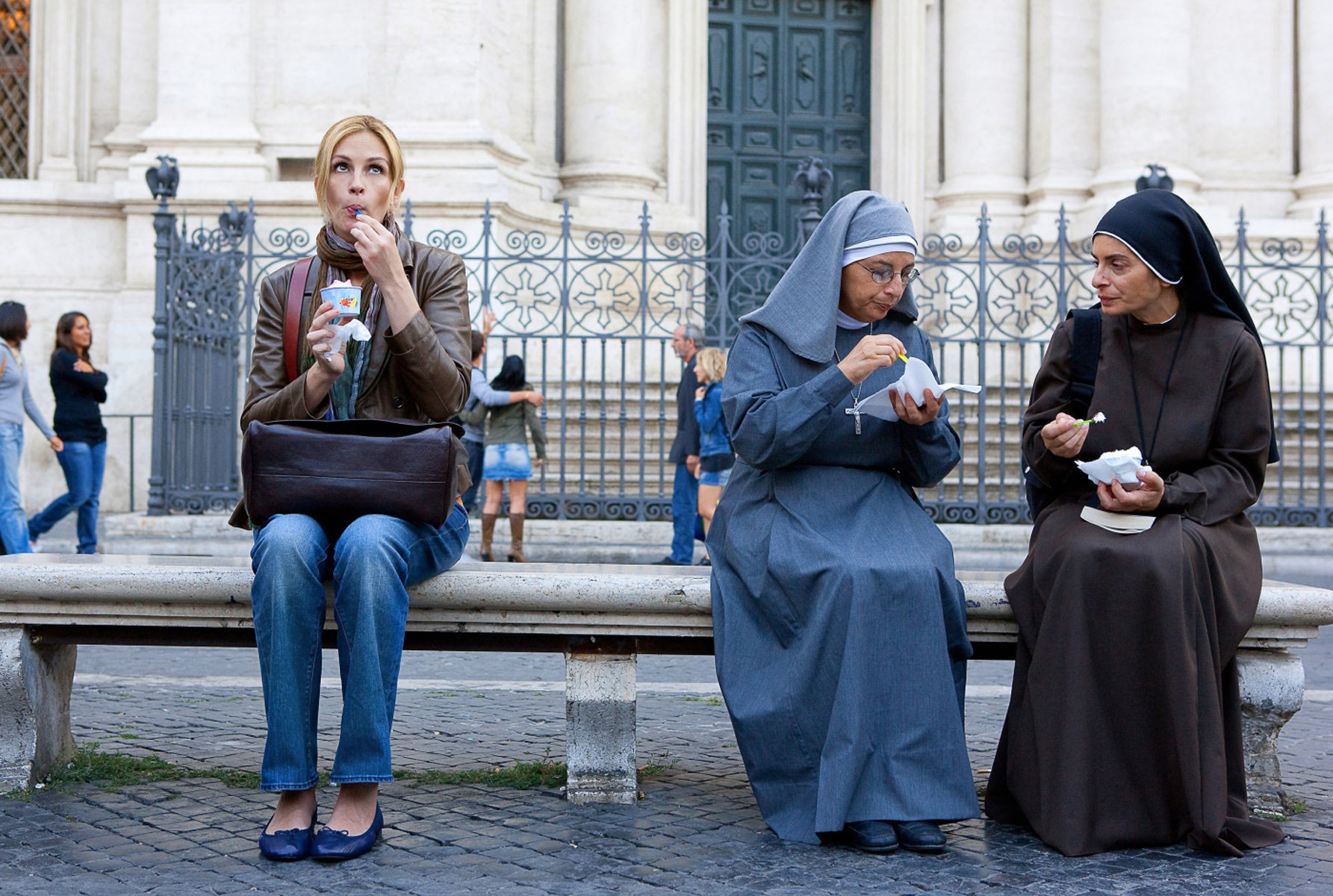 It is almost impossible not to include the iconic The Colosseum if one is filming in Rome. Even though Liz does not visit it, we get a beautiful drone shot of the impressive historic structure. In the film, Liz also heads to Naples, the birthplace of pizza. The pizza scene is filmed at L’Antica Pizzeria da Michele, a restaurant that dates back to 1870.

A large chunk of Liz’s time in India is spent at an ashram. Since Elizabeth Gilbert never revealed the location of the actual ashram, those scenes were filmed at the Hari Mandir Ashram in Pataudi, Haryana. The ashram occupies 28 acres of land and also has a hostel and school. The film used several ashram staff as extras, especially for the “langar” (a communal meal) scenes. The production team worked for a month to prepare the sets ahead of the filming.

Julia Roberts and the crew stayed at the Pataudi Palace for the duration of filming in Pataudi. The palace, also known as Ibrahim Kothi, belongs to the Pataudi family. It was passed on from Nawab Mansoor Ali Khan Pataudi, a famous cricketer, to his son and Bollywood star, Saif Ali Khan. 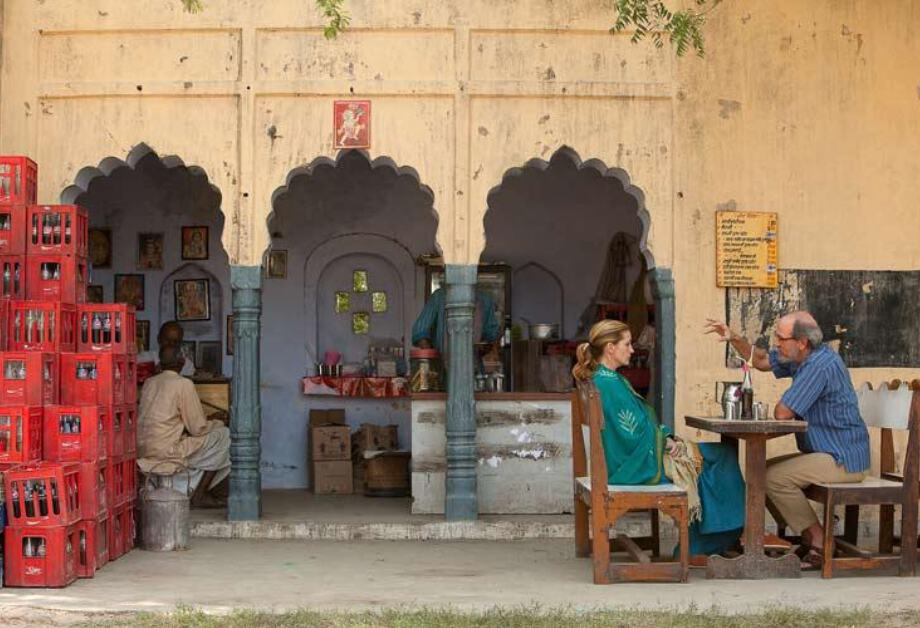 Several sequences were also filmed in Mirzapur, Uttar Pradesh, including the scene where Richard and Liz are enjoying a cup of tea together. This ancient town is situated on the banks of the River Ganga. A small part of the movie may have also been filmed in Delhi, the capital city of India.

Liz goes to Indonesia for the last leg of her trip, where she falls in love with Felipe. Ubud and Padang-Padang Beach in Bali are primary filming locations in Indonesia. The beautiful rice paddies where Liz is seen riding a bike is the Tegallalang Rice Terrace. Liz and Felipe also enjoy a stroll through the vibrant and bustling local market, which is actually the Ubud Market, AKA, Pasar Seni. It is located across the road from the famous Ubud Palace.

In the film, Liz goes to meet the Balinese medicine man Ketut Liyer. Those sequences have been filmed at Liyer’s actual house, which lies to the south of Ubud. The beach scenes were filmed at Padang-Padang, located in the Bukit Peninsula of Bali. However, the bar where Liz and Felipe meet was a set created for the movie. 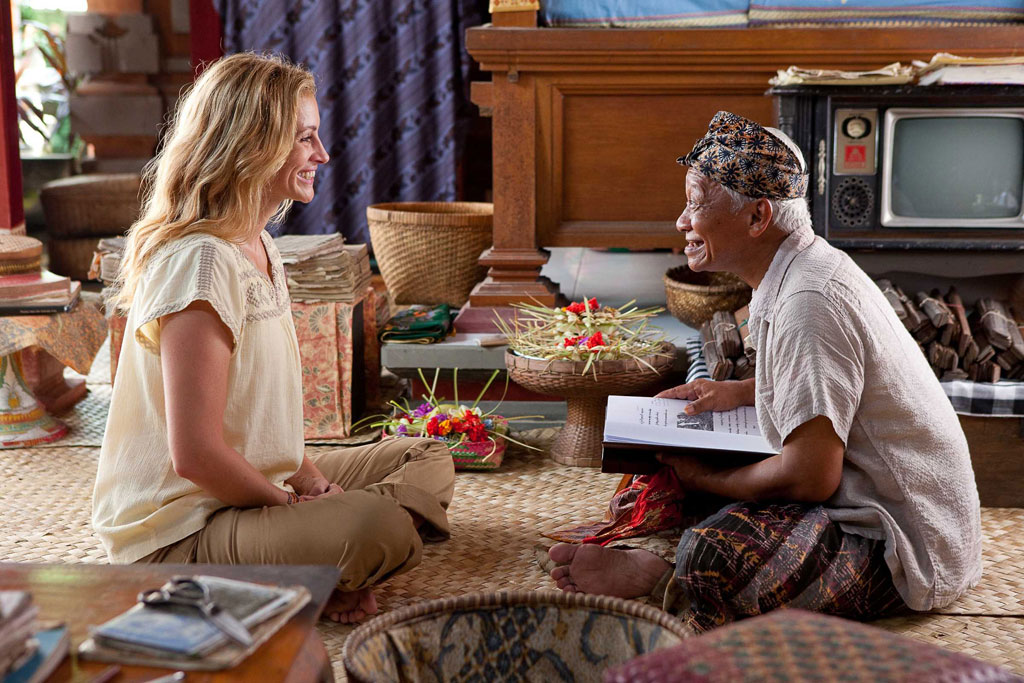