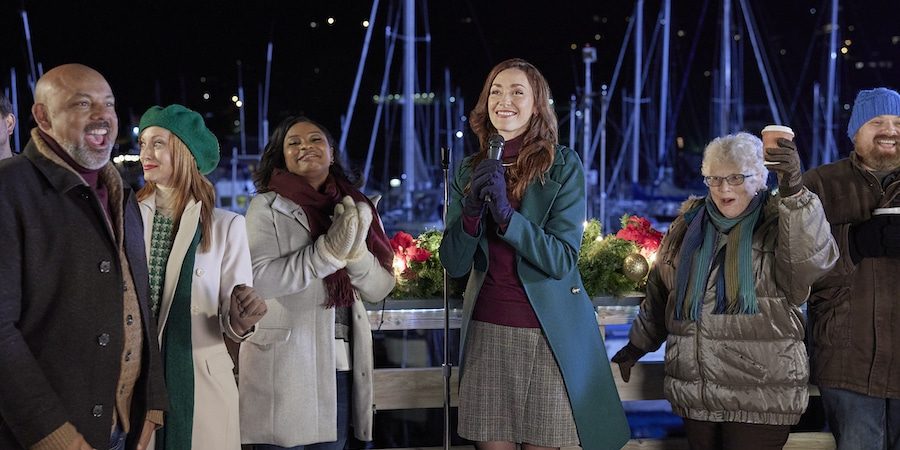 Directed by Kirsten Hansen in the screenwriter’s feature directorial debut, the festive tinted romantic-comedy ‘Nantucket Noel’ is a lovely addition to Hallmark Channel’s ‘Countdown to Christmas’ schedule. Based on the novel ‘Let it Snow’ by Nancy Thayer, the story follows Christina as she inherits her family toy store by the Nantucket wharf following her mother’s demise. While she has difficulty letting go of her mother’s memories, there remains another problem to address. Driven and confident realtor Andy visits his paternal home in Nantucket for Christmas, along with his young daughter.

However, the problem is that Andy is consulting with his father to turn the harbor into a new marina, and the plan endangers Christina’s family heritage. Meanwhile, Christina begins to develop feelings for Andy, but the opposite interests may dent the budding romance. The story of the feel-good movie unfolds in the titular Nantucket, a tiny island hamlet off the coast of Massachusetts. While the location is a popular tourist destination for the gastronomic culture, scenic beauty, and upscale boutiques, you may wonder whether the film was shot in this location. Well, let us find out!

‘Nantucket Noel’ was filmed in its entirety in Canada, especially in and around the province of British Columbia. Filming commenced on September 10, 2021, and was wrapped up by the beginning of October of the same year. Well, you may have thought that the movie was indeed filmed in Nantucket, but that is probably due to the meticulous work of the production design team. Furthermore, the production team’s decision to shoot the film in British Columbia hardly comes as a surprise since most Hallmark movies are filmed in the region.

The diverse and unique landscapes in this region can be doubled as many places, the natural splendor is a treat to the eyes, and the lucrative tax credit provided by the provincial government comes in handy for the producers. Moreover, the fully developed production districts of Vancouver and Burnaby can cater to any size of production, be it global, local, a TV movie, or an international hit. Let us now take you to the specific locations where the movie was filmed!

Headed to this location for a few weeks… 🎥🎄🎬 pic.twitter.com/LtUrsMMaVy

‘Nantucket Noel’ was filmed in the Sunshine Coast region in southwestern British Columbia that sits on the Strait of Georgia. The production team chose the cozy coastal community of Gibsons to film the movie, as the town presumably stood in for Nantucket in the movie. Although a small town, Gibsons hosts tourist crowds from all over the country and abroad due to its eclectic confluence of old and new.

The many boutiques, museums, eateries, galleries make for a unique experience for travelers. Following the filming of CBC dramedy ‘The Beachcombers’ in the area, the town has also established itself as a coveted filming location. The crew scouted the town and surrounding areas, looking for ideal places to carry out the shooting of the film. They quite evidently made regular tours to the commercial waterfront hub.

Locally known as Gibsons Landing, the area has steadily transitioned from a forest-dependent economy to diverse industries. Several scenes were filmed at Molly’s Reach, a restaurant located at 647 School Road, in the town. They presumably set up a base in Pacific Sands Beach Resort, a 3-star hotel located at 1421 Pacific Rim Highway a bit far in Tofino.

Nantucket Noel Cast: Who is in it?