Where Was Molly’s Game Filmed?

Directed by Aaron Sorkin, ‘Molly’s Game’ is a biographical crime film that revolves around Molly (Jessica Chastain), an Olympic-class skier who moves to Los Angeles after suffering a career-ending injury. While working as a waitress, she gets hired as the office manager of Dean (Jeremy Strong), who includes her in his underground poker games. When Molly starts earning large sums of money in tips and develops good relations with many big players, a threatened Dean fires her. Molly starts her own poker games, but things go awry when she gets into an altercation with a high-profile player.

Molly then moves to New York for a fresh start but ends up facing charges for illegal gambling. To protect herself and her clients from the FBI, Molly hires Charlie Jaffey (Idris Elba) as her attorney. Based on Molly Bloom’s eponymous memoir, the 2017 movie is a mental and visual treat with high-stakes poker games in luxurious settings that make you appreciate just how affluent the players are. In case you are excited to know where the amazing scenes within this movie were captured, we have got your back!

Despite being primarily set in New York City and Los Angeles, ‘Molly’s Game’ was extensively filmed in the city of Toronto, Ontario. Several scenes were also shot in other parts of the Canadian province and the city of New York. The principal photography commenced on November 9, 2016, and concluded on February 9, 2017. Let’s take a deeper dive into the filming process of the critically acclaimed film!

The majority of ‘Molly’s Game’ was filmed in Toronto, the capital city of the province of Ontario. Several interior scenes were shot on sets created on Stages 2, 11 and 12 at the Pinewood Toronto Studios, located at 225 Commissioners Street. The production complex was used to create the courtroom scenes where Molly’s trial takes place. It appears that the facility also doubled up as parts of Charlie’s office in Manhattan.

However, Citigroup Place at 123 Front Street West served as the building where Molly’s attorney Charlie’s office is located in the film. The scenes in the lobby of the lawyer’s office were captured at the Toronto Dominion Centre or the TD Center which is situated at 66 Wellington Street West in the city.

The production team also visited several stylishly lavish eateries to shoot a few sequences of the Jessica Chastain starrer. Katana on Bay, previously known as Blowfish on Bay, served as the backdrop for Molly’s meeting with a literary agent regarding her book. Located at 333 Bay Street, the restaurant has since been closed permanently.

A few scenes were reportedly shot in well-known steakhouses like Bardi’s Steak House at 56 York Street and Hy’s Steakhouse & Cocktail Bar at 365 Bay Street. These sites seemingly served as the location for scenes where Molly is confronted by several mobsters.

Molly’s first place of work in the South Californian city of Los Angeles is the starting point of her business. To film the scenes set in and around the aforementioned site in the film, the production team moved to the corner of Bayview Avenue and Belsize Drive in the Leaside neighborhood in Toronto. Specifically, a commercial building at 1560 Bayview Avenue doubled up as Molly’s starter office.

Apart from the city of Toronto, several scenes were taped in the town of Collingwood in Simcoe County, Ontario. The 2002 Winter Olympics qualifier in which Molly Bloom participates and later injures herself is held at the Deer Valley Resort in Utah. However, the scenes depicting the same were filmed at the Beaver Valley Ski Club, located at 100 Pioneer Drive in Markdale in Grey County, southern Ontario.

Given that a significant portion of the movie’s story is set in the city of New York, several key scenes were shot using the Big Apple as the backdrop. The Wollman Rink between East 62nd and East 63rd Street in Central Park in Manhattan appears in the movie as Molly skates through the rink while waiting for Charlie. A bench near the rink is where Molly reconciles with her father, Larry Bloom (Kevin Costner), in the film. 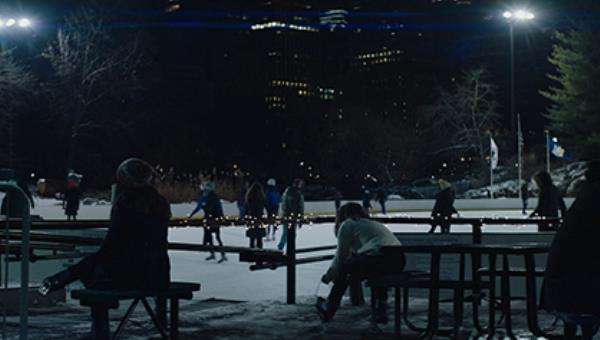 Other locations in the city that appear in ‘Molly’s Game’ are The Plaza Hotel at 750 5th Avenue and Grand Army Plaza at the intersection of Fifth Avenue and Central Park South.

Read More: Is Molly’s Game Based on a True Story?