Where Was Netflix’s Roald Dahl’s Matilda the Musical Filmed? 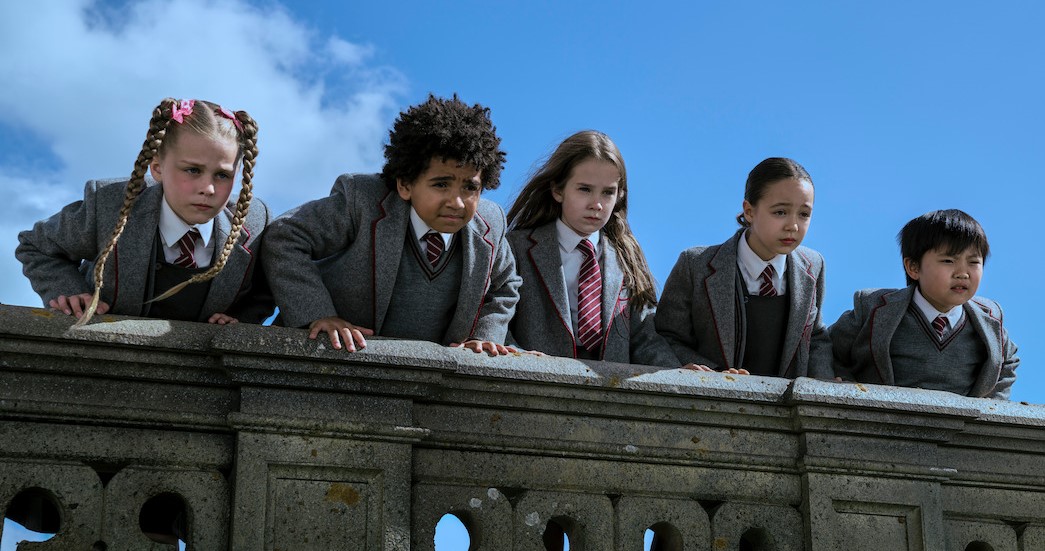 Based on the 2011 eponymous stage musical by Matthew Warchus, Dennis Kelly, and Tim Minchin (adapted from Roald Dahl’s 1988 novel ‘Matilda’), Netflix’s ‘Roald Dahl’s Matilda the Musical’ is a musical comedy-drama movie directed by Warchus. It follows a little girl named Matilda Wormwood, who has a sharp mind and is also rebellious. Being a daughter to possibly the worst parents ever and a student of a prison-like school, she decides to stand up against the authoritative figures and change her life.

Thanks to her extraordinary superpower and courageous nature, Matilda’s efforts to do what’s right are met with favorable and magical results. The fantasy movie features impressive onscreen performances from talented actors like Alisha Weir, Emma Thompson, Lashana Lynch, Stephen Graham, Andrea Riseborough, and Sindhu Vee. While Matilda’s magical journey keeps you hooked to the movie, the use of exciting locations, including Crunchem Hall Elementary School, makes you wonder where ‘Roald Dahl’s Matilda the Musical’ was shot. In that case, we have you covered!

‘Roald Dahl’s Matilda the Musical’ was filmed in England and Ireland, specifically in Hampshire, Dunstable, Surrey, Buckinghamshire, West Sussex, and Dublin. The original plan was to shoot the movie between August and December 2020, but due to the COVID-19 pandemic, it got postponed. After months of delay, the principal photography reportedly commenced in early May 2021. However, in July of the same year, it halted for nearly ten days due to a positive COVID-19 test on the set of the first unit. Meanwhile, the second unit continued shooting. Now, let’s look at all the specific places that appear in the Netflix movie!

Many pivotal sequences for ‘Roald Dahl’s Matilda the Musical’ were lensed in Hampshire, a ceremonial and non-metropolitan county in the western part of South East England. In particular, most of the exterior scenes of the Crunchem Hall Elementary School were recorded in and around the Bramshill House in the civil parish of Bramshill. The musical sequence where all the kids dance in front of the school is set against the backdrop of the southern facade of the mansion. Established in the early 17th century, Bramshill House is a Grade I Listed mansion with aesthetic staterooms, a library, numerous banquet halls, and two chapels.

Additional portions of ‘Roald Dahl’s Matilda the Musical’ were taped in Dunstable, a market town and civil parish in England’s Bedfordshire. All the windmill and countryside scenes were reportedly shot on location in Bison Hill Car Park on Eaton Bray in Dunstable. The production team reportedly took inspiration from the Cobstone Windmill and designed a windmill in the car park just for the movie. Furthermore, ZSL Whipsnade Zoo in Whipsnade and Dunstable Downs served as key filming sites.

The filming unit traveled to Surrey, another ceremonial and non-metropolitan county in South East England, to record some pivotal scenes for ‘Roald Dahl’s Matilda the Musical.’ They utilized the facilities of Shepperton Studios on Studios Road in Shepperton and lensed some key portions of the movie, mainly interiors.

Shepperton Studios is home to 14 stages, and the team reportedly built studio sets across nine of them — A Stage, B Stage, E Stage, F Stage, H Stage, L Stage, R Stage, and S Stage — and even used the massive backlot area. Given the multitude of facilities available, Shepperton Studios makes for a suitable production location for different projects.

For shooting purposes, the cast and crew members of ‘Roald Dahl’s Matilda the Musical’ also traveled to other locations across England. For instance, most of the village scenes were recorded in the actual village of Denham, in the unitary authority of Buckinghamshire. In August, they were spotted taping some important scenes for the movie in and around Christ’s Hospital and Itchingfield, both in West Sussex’s Horsham district. Besides, a house in Fulfords Hill in Itchingfield was used to tape the scenes depicting Miss Honey’s residence.

@MarkCarterMC @EmilyKJeffery Film crew are setting up in Itchingfeild / Christ's Hospital for filming of "Matilda the Musical" due to be screened next year. pic.twitter.com/DQpYjjG0U5

A few sequences for ‘Roald Dahl’s Matilda the Musical’ were lensed in and around Dublin, Ireland’s capital and largest city. Located at the mouth of the River Liffey, it is considered an important hub for arts and culture, administration, education, and industry. The city is home to several landmarks and places of interest, such as Dublin Castle, the Spire of Dublin, the Ha’penny Bridge, Christ Church Cathedral, and the National Library of Ireland, to name a few.

Read More: Is Netflix’s Matilda Based on a True Story or a Book?