Where Was The Claus Family Filmed?

Directed by Matthias Temmermans and starring Jan Decleir and Mo Bakker in the leading roles, ‘The Claus Family’ (‘De Familie Claus’) is a Dutch-Flemish holiday movie that creates a magical festive ambiance at the backdrop of familial tragedy. The film tells the story of a family coming together in the face of adverse situations, and the tale unfolds through the eyes of Jules.

Jules is not fond of the holiday seasons, but his grandfather manages to cheer him up. In the end, Jules learns the importance of traditions. The endearing family movie unfolds in Belgium, and the scenes are lit with a festive ambiance. However, if you seek to visit the movie’s locations, let us guide you to the places.

‘The Claus Family’ was filmed in its entirety in and around Belgium, especially Bruges. Filming was originally scheduled to take place in March 2020, but after a delay imposed by the COVID-19 pandemic, the crew commenced filming on June 8, 2020, which was wrapped up within the month. Although officially a Dutch-Belgian joint production, most of the story unfolds in the Flemish-speaking territory of Belgium.

To showcase the beauty of the region, the director took his cast and crew to Belgian territory to film the bulk of the sequences. In turn, the movie showcases some glorious festive scenes from around the region. Well, they were filming the movie during a heatwave, but the director succeeded in creating the magical ambiance externally with the help of imagination… and frosting machines. Let us now take you to the specific locations where the movie was filmed!

The movie’s entirety was filmed in Bruges, the capital and the largest city of the Flemish-speaking province of West Flanders in Belgium. During the production, the party stayed at the Hotel Academie, a four-star hotel located at Wijngaardstraat 7/9 in a peaceful neighborhood of Bruges. The production team visited some lesser-known tourist spots from the city while capturing great establishing sequences on camera.

Some shots were taken in the landmark location of Walplein, a cobblestone square that dates back to the 12th century. The early sequences of the movie feature this location. Brimming with cafés and curio shops, the square is a coveted tourist destination tucked away in the heart of the city.  Scenes were notably filmed outside ’t Nieuw Walnutje, a restaurant located at Walplein 3 in the square.

On the way to Jules’ grandfather’s house, the overpass is Bonifacius Bridge, a quaint pedestrian bridge that takes on a dreamy appearance during the winter season. Situated at 10, Groeninge 6, the bridge has a distinct old-world charm and presents a depth-of-field view of the township. However, the snow was mostly conjured by the set designers and crew members. 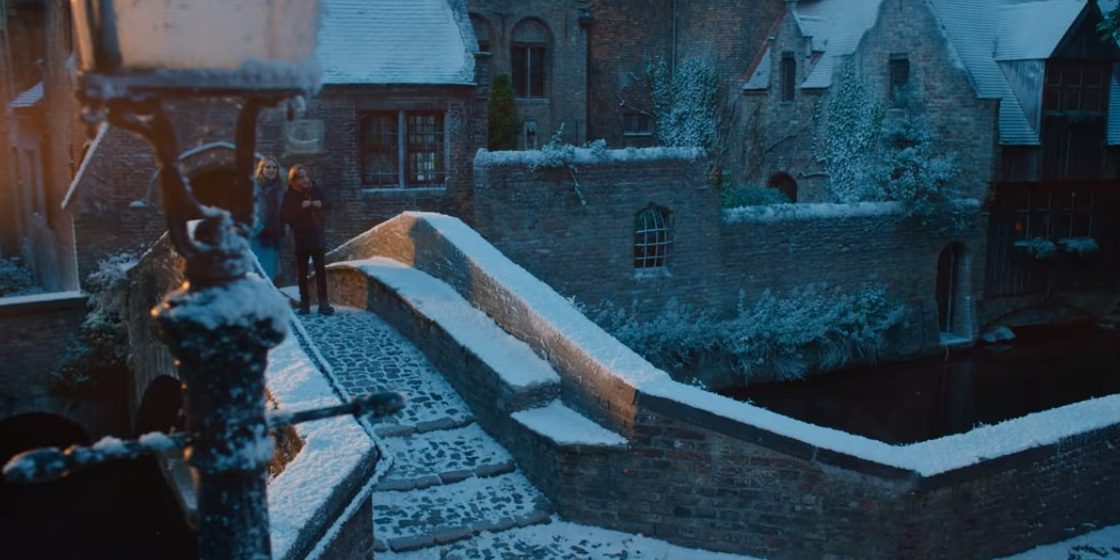 Scenes were also filmed at the Vlamingstraat area of Bruges. The biscuit factory named Mareine, where Jules’ mother Suzanne works, does not exist. The scenes, however, were filmed at the heritage site of Eperon d’Or. It is a museum located at Prins Albertlaan 5, in the Izegem municipality of West Flanders.

The crew also visited the nearby province of Antwerp to capture some sequences. Scenes were filmed at Begijnhof, a tourist attraction in the Lier municipality of the province. The picturesque city is situated at the intersection of the Great and Little Nete rivers.