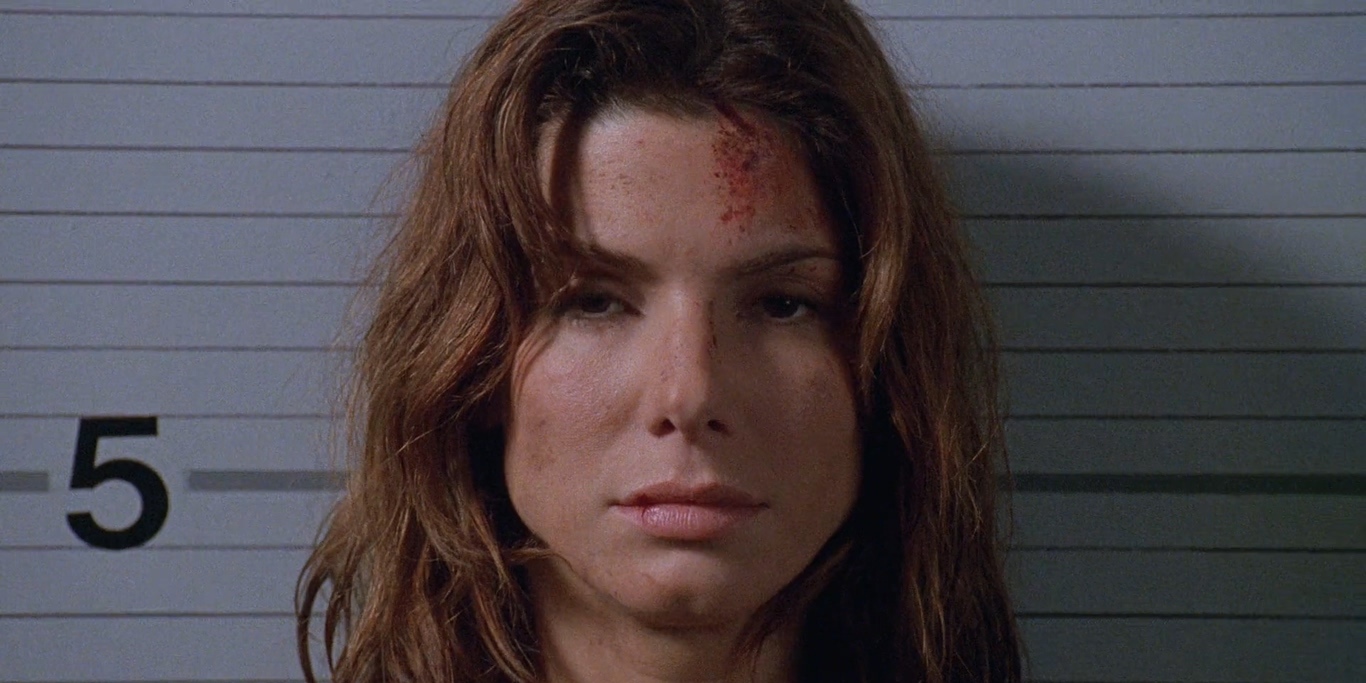 Directed by Irwin Winkler, the 1995 action thriller ‘The Net’ takes the viewers to a retro world of floppy disks and pixelated screens. At the center of the story lies an ever-unfolding and sinister conspiracy. Sandra Bullock acts as everyday low-key software developer Angela Bennett, who only wants an escape from her dreary life. But after the surfacing of a mysterious disk concealing a backdoor to access and alter government administrative websites, Angela’s life takes a downward turn. At the vacation, she meets charming espionage, Jack Devlin (Jeremy Northam).

As things spiral out of control, Angela gets to know that her identity has been erased. With all its eccentricities, the movie presents us with a palpable representation of the paranoia that came with the dawning of technocratic civilization. The story takes place in California, with a brief tour to the Mexican coast. Curious to know where ‘The Net’ was filmed? We have got you covered!

‘The Net’ was filmed mostly in the US, especially in California and Washington, D.C., with a short trip to Spain. Filming commenced on January 5, 1995, and wrapped up by April of the same year. Let us now take you to the specific locations where the cyber-thriller was filmed!

The majority of the movie was filmed in various locations in and around California. A bulk of scenes were filmed in and around Santa Monica, a lush coastal city west of LA. In one scene, Angela falls asleep in a packed parking lot in an attempt to evade the police. The scene was filmed at 1200 Santa Monica Boulevard in the city. You can identify the street marker from the scene. 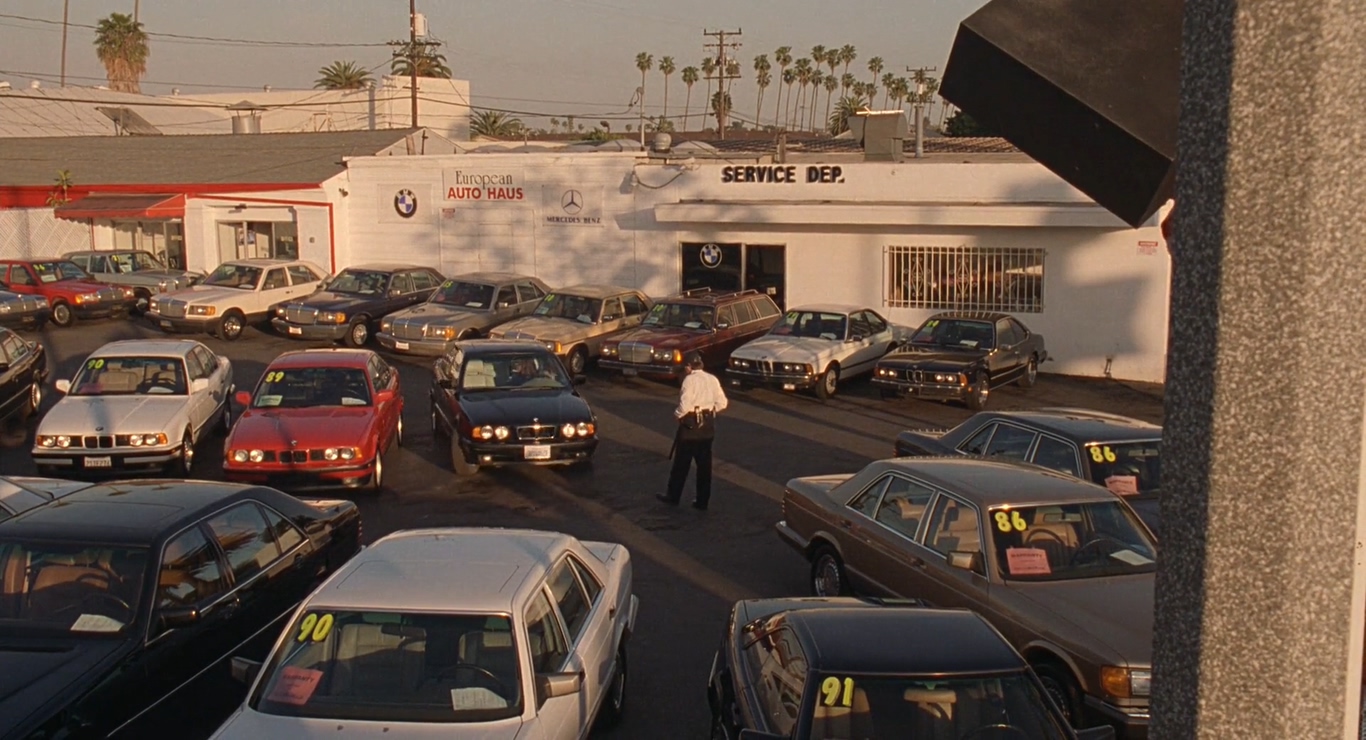 Another important location in the movie is the Santa Monica Pier, where Angela decides to meet her internet friend Cyberbob in person. However, at the venue, she finds Jack Devlin instead of Cyberbob. The sequence was filmed on location by the pier and the adjacent amusement park. 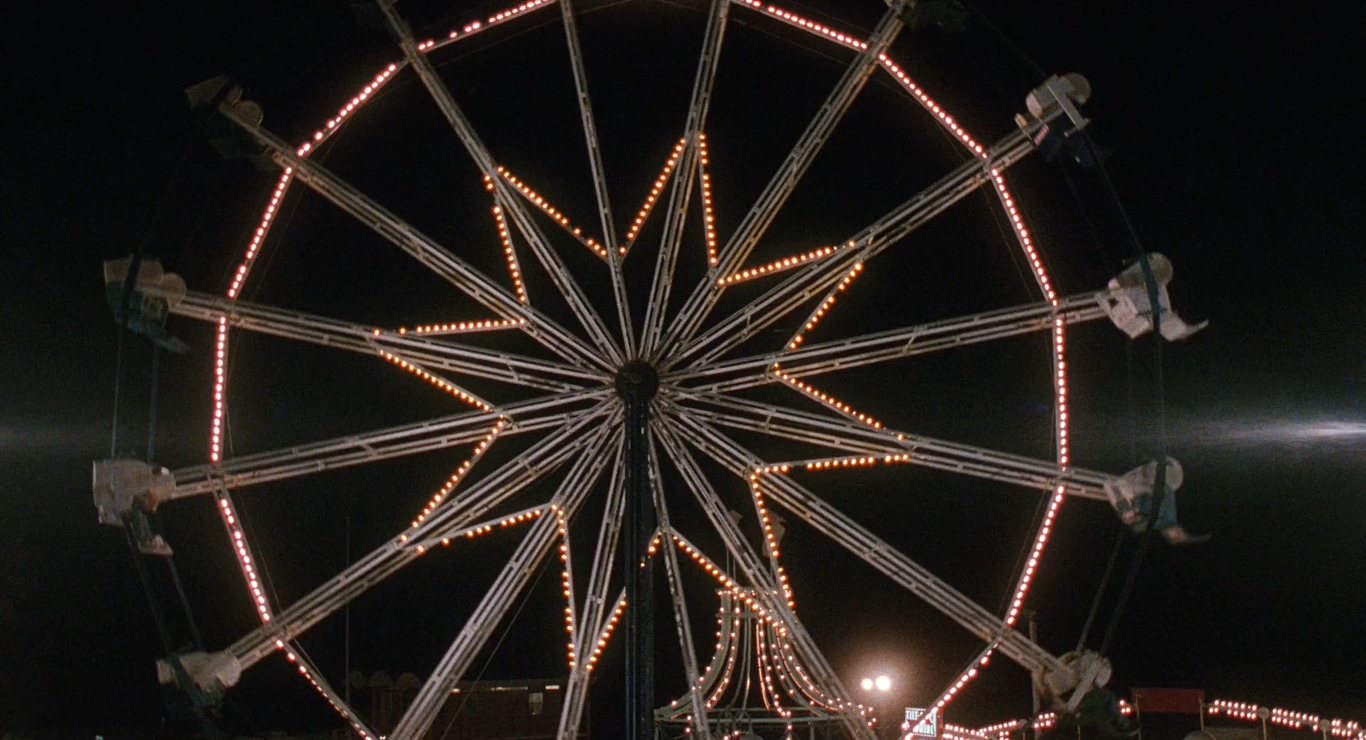 After meeting her ex-lover therapist Alan Champion, Angela heads to a hotel. The sequences set in the hotel were filmed in a property at 1431 Ocean Avenue in Santa Monica. 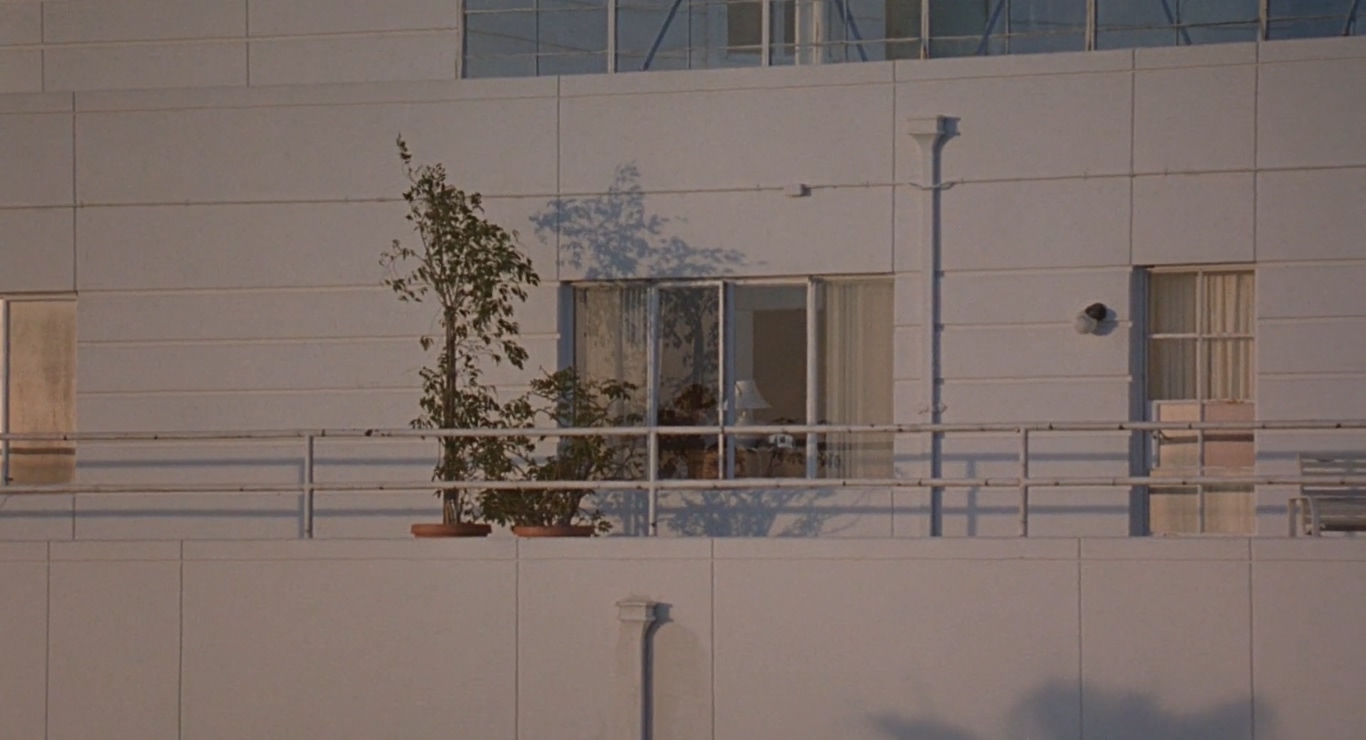 One crucial scene featuring Angela on the run was filmed at Dell Avenue in the city. 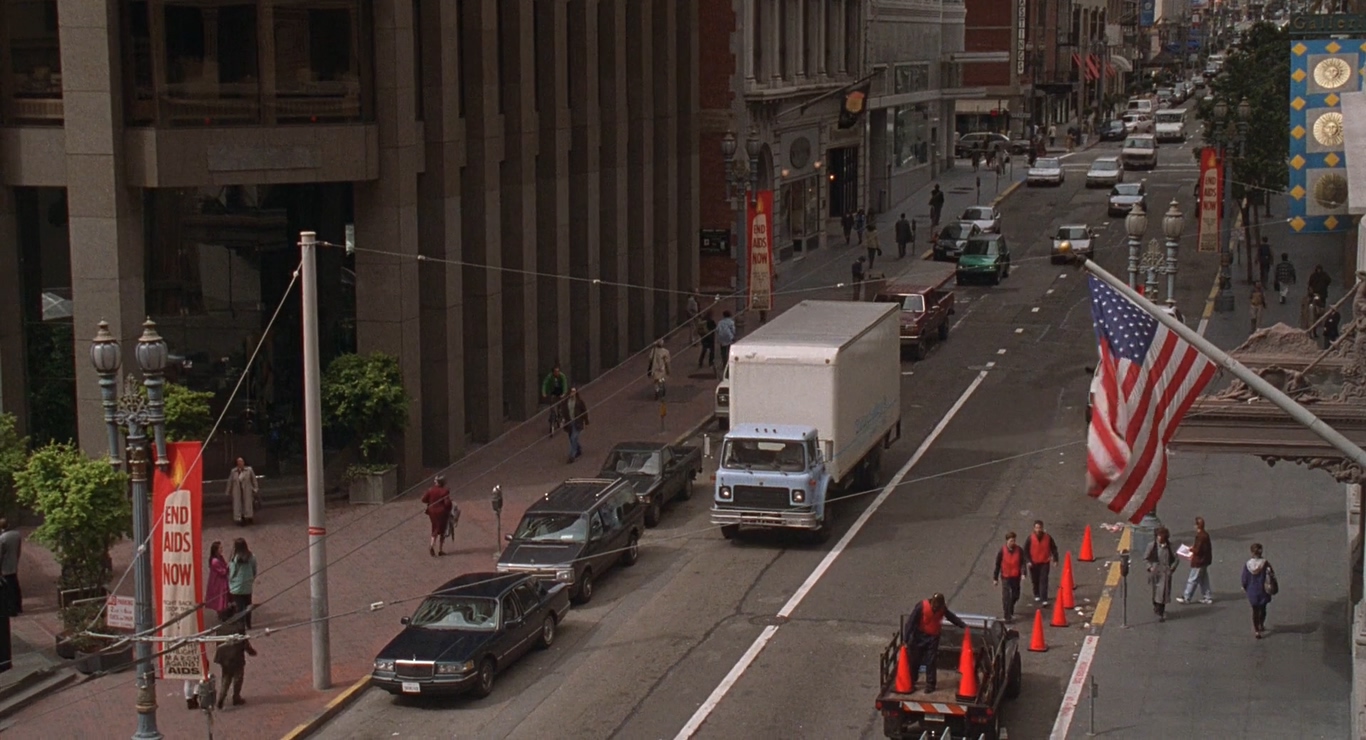 The director took his crew to another Californian city, San Francisco, to shoot a few scenes. Angela works at the IT firm Cathedral Software, where she does an errand to access her computer. The production team filmed the exterior scenes in McKesson Plaza, a commercial complex located at 1 Post Street in the city of San Francisco. 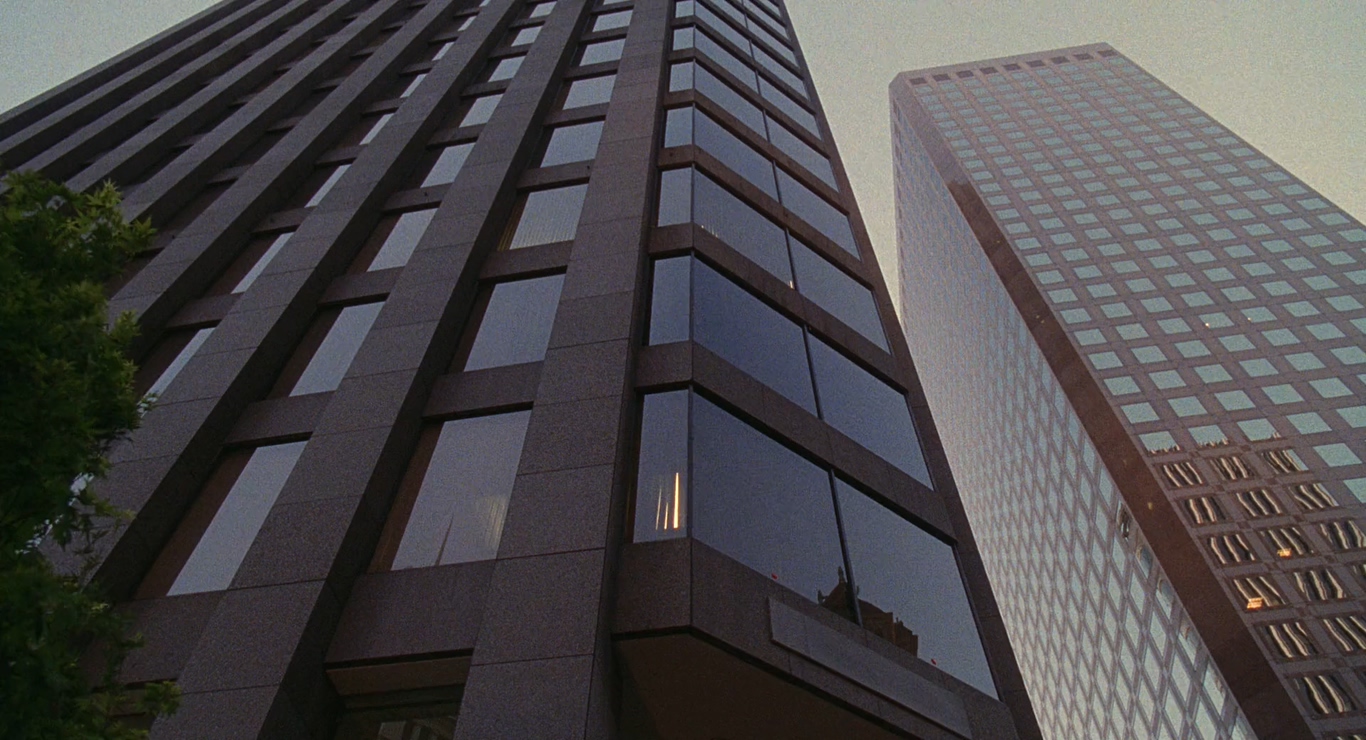 The climax is acted out in a computer convention. The scenes were indeed filmed at Moscone Convention Center, a convention and exhibition complex located at 747 Howard Street in the city. The crew filmed during the MacWorld tradeshow of 1995, and they had to put up a different banner to conceal the actual event. 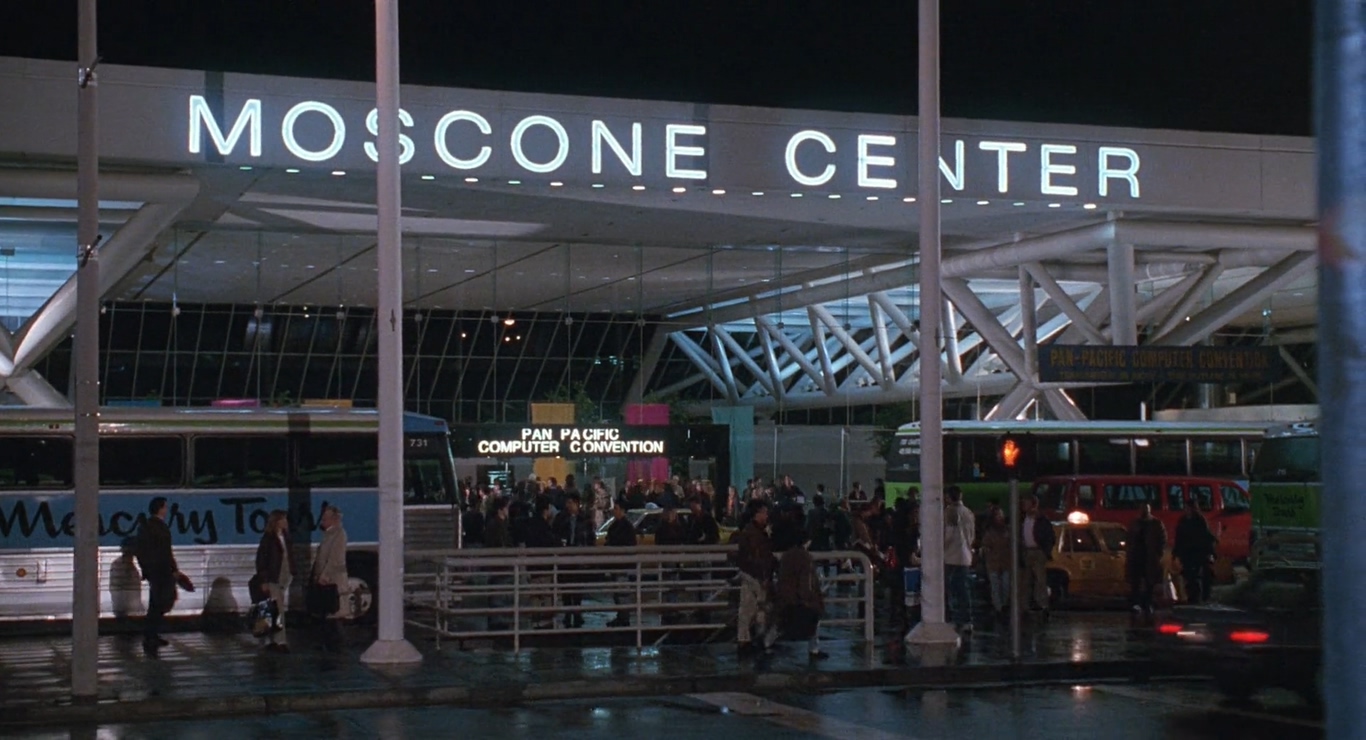 Another set of scenes was filmed around Los Angeles, an iconic urban metropolis situated within the state. The city is home to Hollywood, one of the largest movie production centers in the world. Angela lives in a crammed-up apartment at 407 Finley Avenue in Venice, California. While the address is fictitious, the scenes were filmed at 407 28th Avenue in the same region. 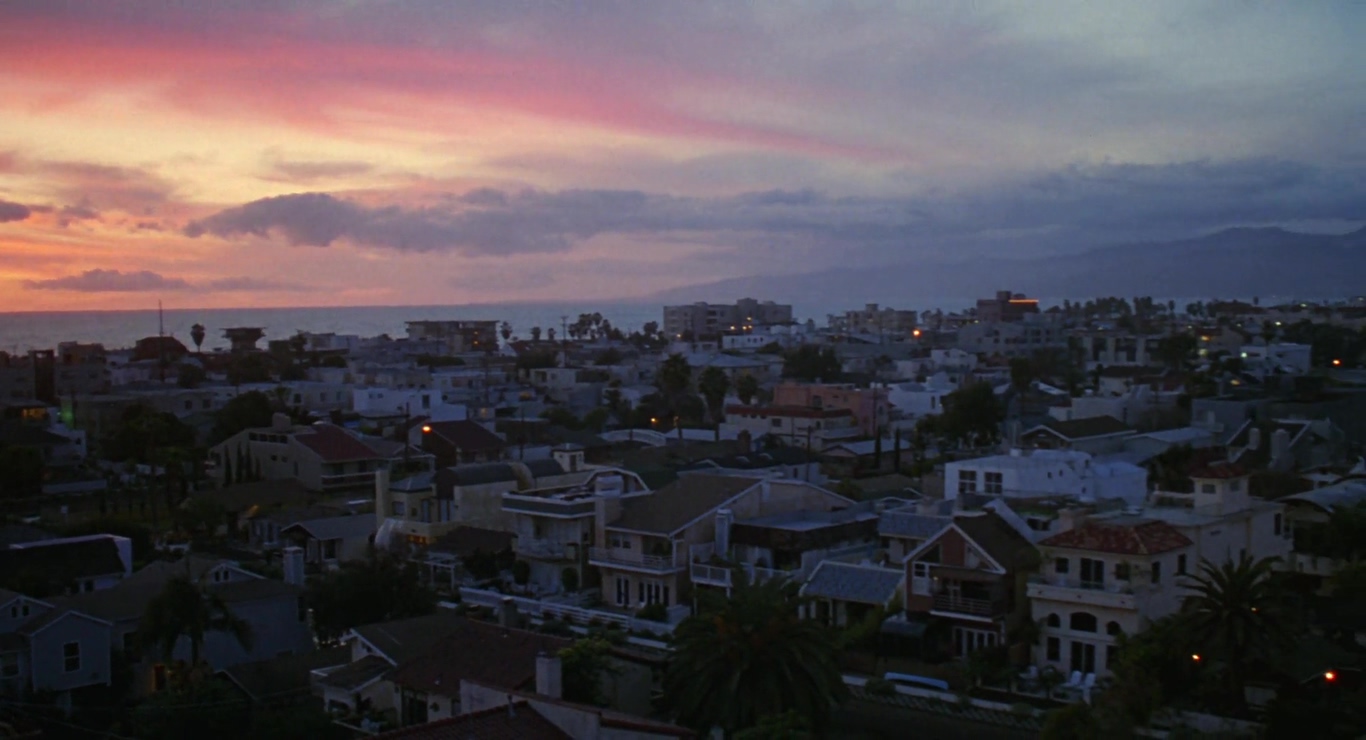 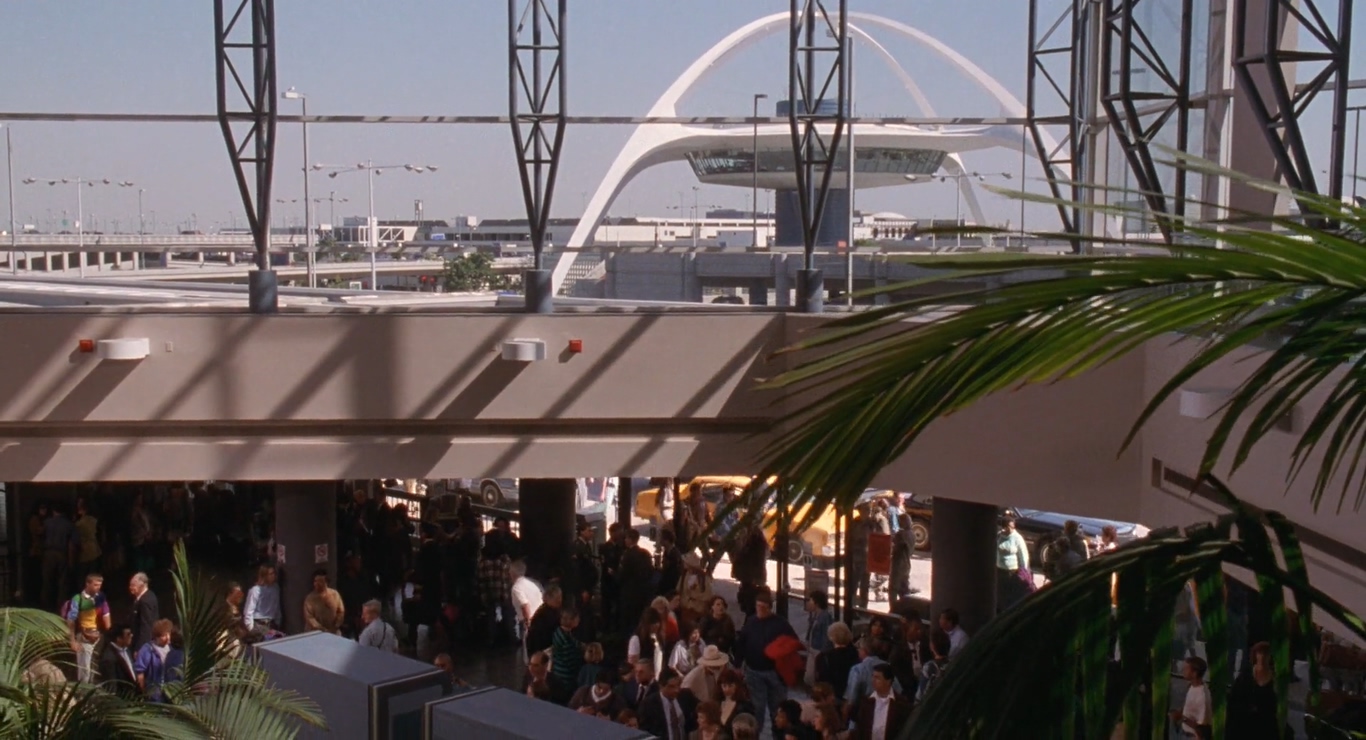 The movie takes us to the US Embassy of Mexico for a brief moment. The City Hall of Pasadena, located at 100 North Garfield Avenue within the Californian city, doubled as the embassy in the movie. 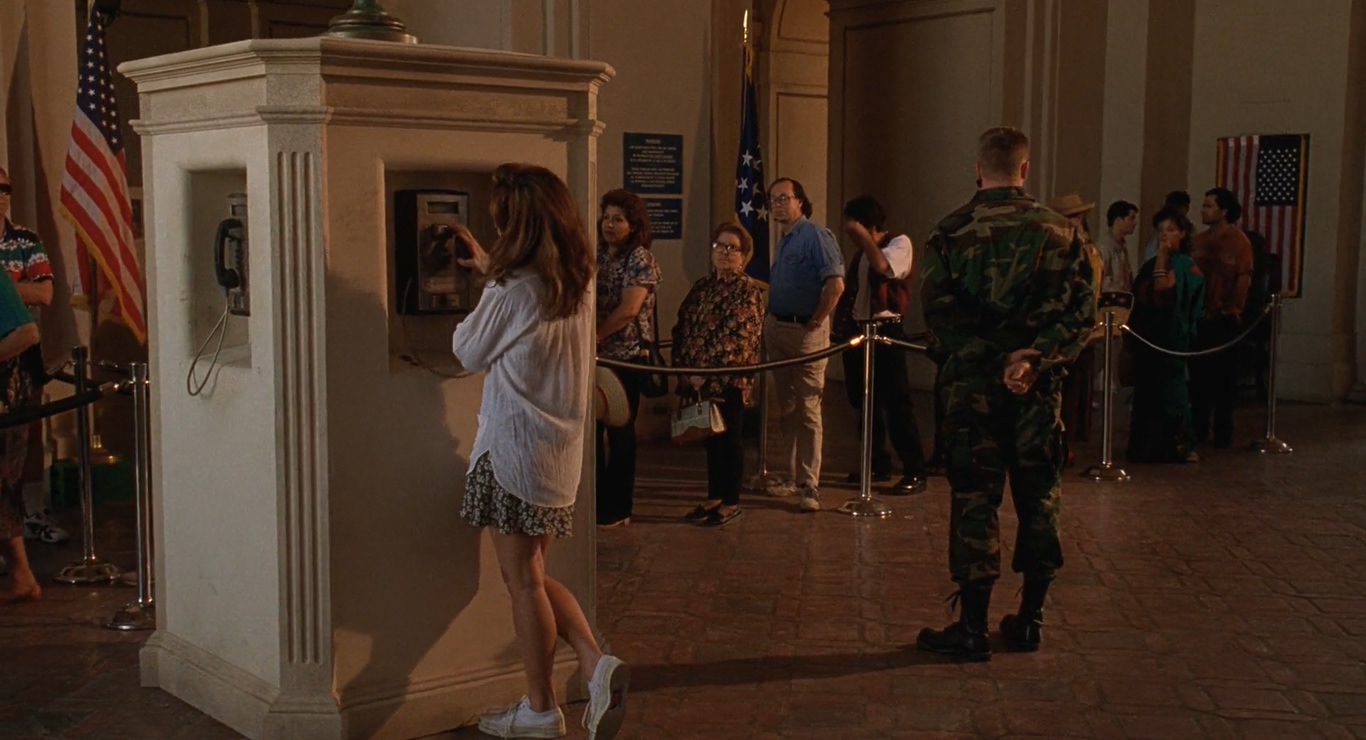 Some of the interior sequences were filmed in the premises of Sony Pictures Studios, a vast movie production studio situated at 10202 West Washington Boulevard in Culver City, California. The crew filmed scenes on stage 23 of the studio. Additional sequences were filmed on Golden State Highway by the Angeles National Forest and also in the city of Alameda. 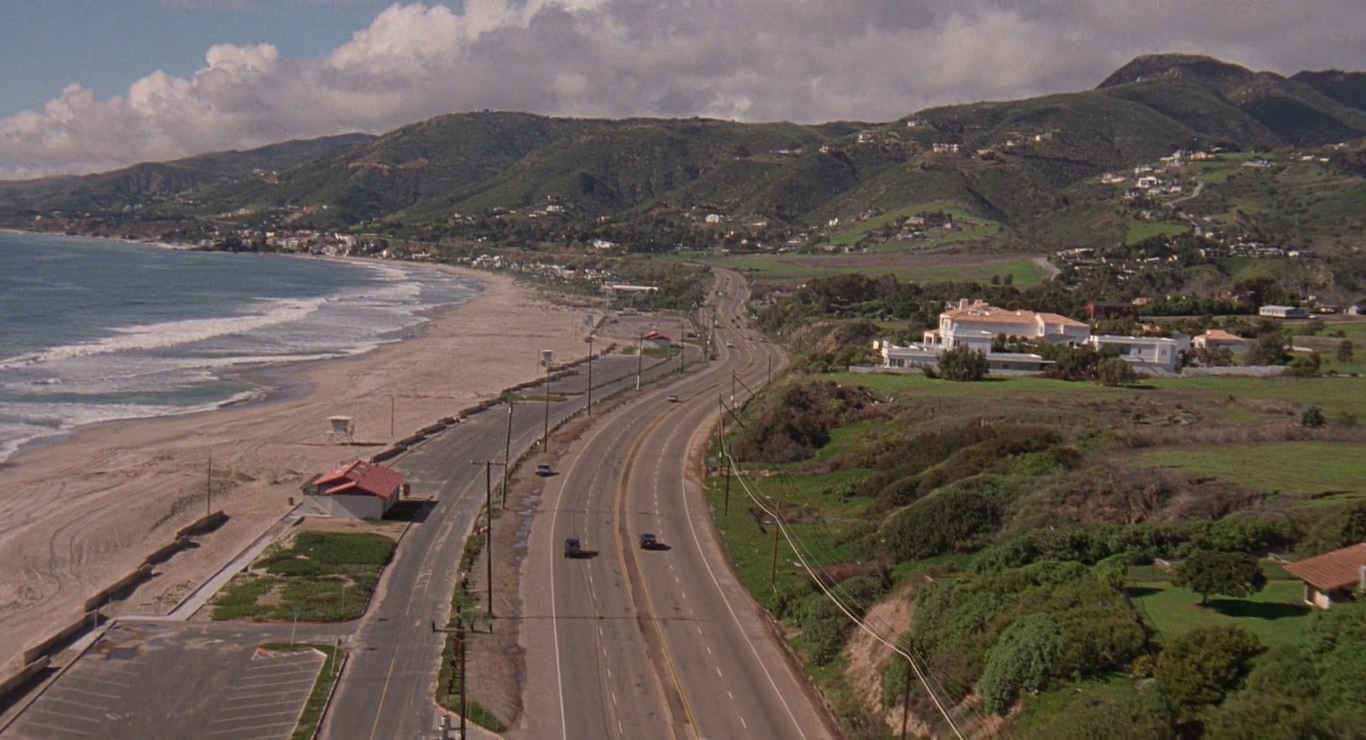 The unit took a brief tour of the US capital to film one early sequence. In the shocking beginning scene, the US attorney of defense takes his own life in a major conspiracy. The scene was filmed in the administrative capital of Washington D. C., catching a glimpse of the Potomac River. 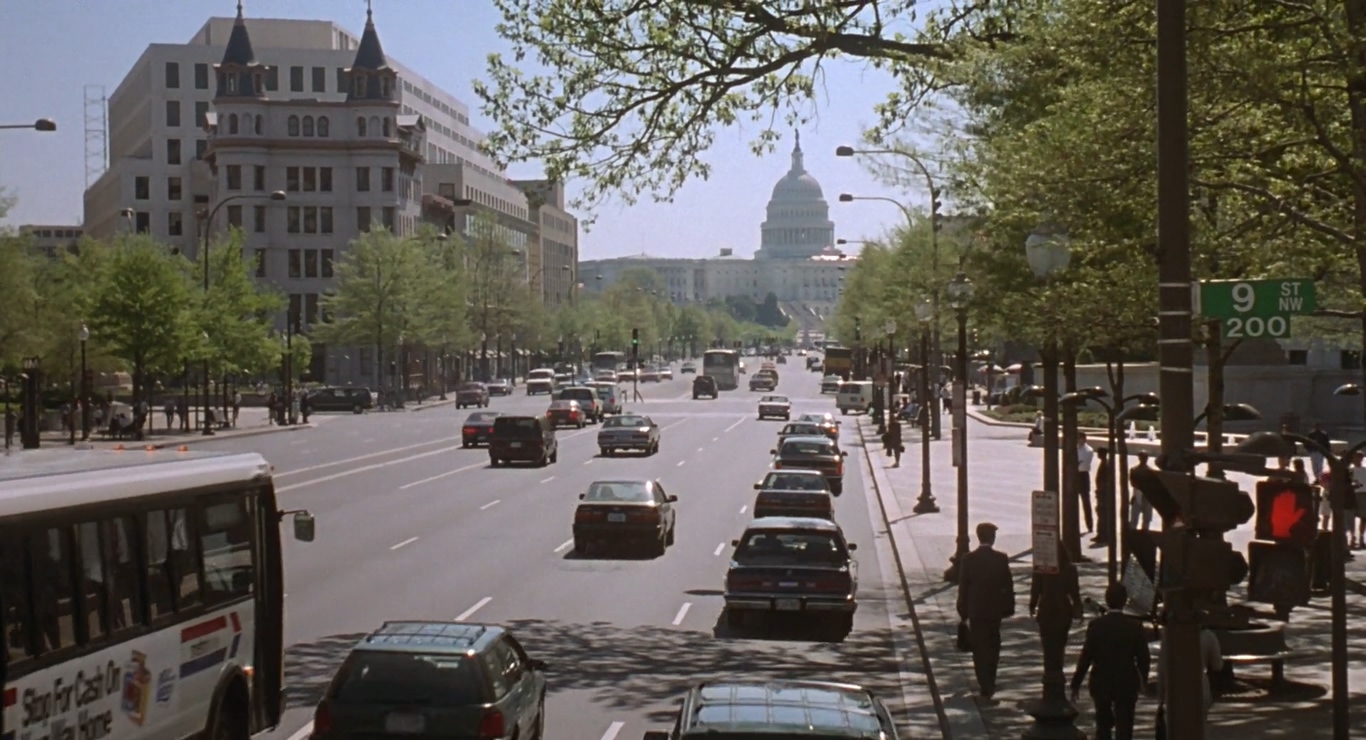 In the film, Angela goes to spend a vacation in Cancun, Mexico. But the production unit did not get a chance to visit the place. However, they ventured out to capture a few shots. The crew shot some scenes in the tranquil municipality of Miguelturra, in the province of Ciudad Real in the Spanish region of Castilla-La Mancha.