Are Elizabeth Gilbert and Felipe Still Together?

‘Eat Pray Love’ is a romantic drama film that takes us on a journey across the globe with Elizabeth Gilbert AKA Liz, as she comes across life-defining experiences. Gilbert’s trip comes to an end in Bali, where she falls in love with Felipe. If you are wondering whether Elizabeth and Felipe are real people, we are here to put your doubts to rest!

Are Elizabeth Gilbert and Felipe Based on Real People?

Yes, Elizabeth Gilbert and Felipe are based on real people. Elizabeth and Felipe are characters from the biographical film based on Elizabeth Gilbert’s best-selling memoir published in 2006, ‘Eat, Pray, Love.’ In the film, Javier Bardem’s Felipe is modeled after José Nunes, whereas Julia Robert’s Liz is based on the writer herself. The book has sold more than 12 million copies worldwide. José Nunes was born in Brazil but was living in Australia when he first met Gilbert in Bali. In 2007, the author got married to José.

José is more than 15 years older than her, something that Gilbert liked about their relationship. She was happy to be with him because she felt that he was nothing like the men her age, who did not have their lives figured out. She would have found it difficult to be in a relationship with them. Gilbert shared what she was getting from José in the relationship was “pretty close to unconditional love.” José Nunes and Elizabeth Gilbert ran an Asian imports emporium called Two Buttons in Frenchtown, New Jersey. They closed down the store and sold it in 2015 because the venture did not interest them anymore.

In 2010, Gilbert wrote another book called ‘Committed: A Skeptic Makes Peace with Marriage,’ which covers her life after ‘Eat, Pray, Love’ and explores the idea of marriage. However, this received a strong response from José’s ex-wife, Elizabeth Lowrie, with whom he has two children. Lowrie published a book in February 2015 titled ‘Committed Undone: A Tale of Love and Love Lost, Retirement, Travel and Spiritual Healing.’ She revealed that she had no choice but to go public since Gilbert misrepresented the details of her relationship with José Nunes.

Are Elizabeth Gilbert and José Nunes Still Together?

No, Elizabeth Gilbert and José Nunes parted ways after 12 years of companionship in July 2016. They were married for nearly ten years before Gilbert took to social media to announce their split. She revealed that the reasons for their break-up were “very personal” and that they parted on “amicable” terms. The former couple sold off their Frenchtown house as well as their two-bedroom apartment in Miami, Florida.

Two months after they split, Gilbert revealed that she was in love with her long-time best friend, fellow author, and musician, Rayya Elias. She said that Elias’ diagnosis of pancreatic and liver cancer made her realize how she truly felt about her. The two celebrated a commitment ceremony on June 6, 2017, in attendance of close family and friends. Seven months later, Elias passed away. 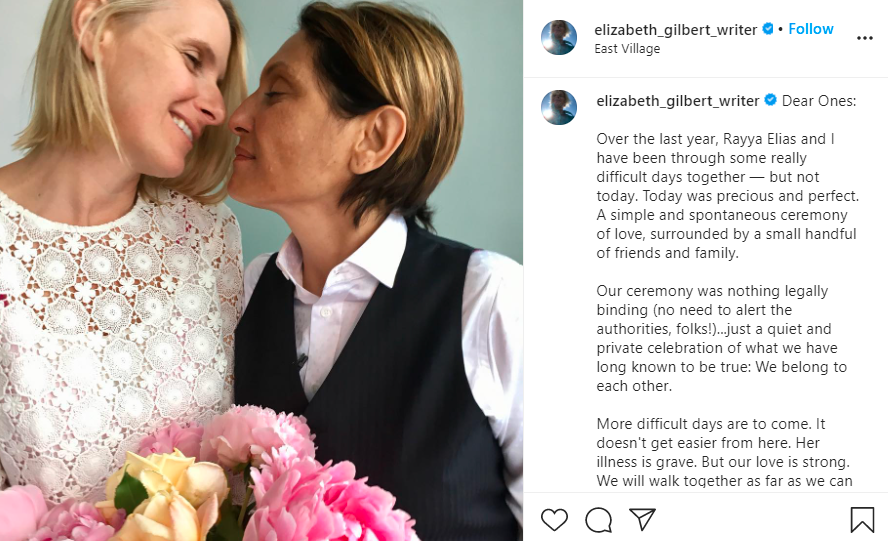 On March 25, 2019, Gilbert announced that she is dating photographer Simon MacArthur, a close friend of Elias. However, the relationship only lasted for about a year. Elizabeth Gilbert continues to hold her ex-husband José Nunes in very high regard and also fondly remembers Rayya Elias. José Nunes has not spoken about his divorce from Gilbert, and not much is known about his personal life.