Why Was Vell Kicked Off From The Hype? Where is He Now?

Created by Rachelle Mendez, David Collins, Rob Eric, and Michael Williams, HBO Max’s ‘The Hype’ is a fashion reality series that provides some of the most talented designers in the US a golden opportunity. The show features several streetwear apparel artists, who hope to win the $150,000 cash prize, and a chance to be co-signed by the mentors Bephie Birkett, Marni Senofante, and Offset. Throughout the competition, the competitors are presented with many more avenues that are sure to boost their careers.

The show’s second season has captivated the viewers, and the participating designers have already gained a fan following. However, one of the most confusing and intriguing turns of events in the show has shifted the focus on Vell Beck, one of the competitors in season 2. His abrupt departure from the show has many audience members wishing to know more about what may have led to his exit. Well, if you, too, are curious about the same and are wondering where the fashion designer is these days, we have your back!

Why Was Vell Beck Kicked Off From The Hype?

Vell Beck is a designer from Harlem, New York, whose brand is VBNYC. In the first episode, he secured a position in the top 10, thanks to his clothing rack that the three co-signers had previously browsed through. Vell further participated in the first challenge, where the contestants were asked to give life to their version of luxury streetwear. While his work did impress the three main judges and the special guests, it did not warrant him the win. Unfortunately, the same could be said for his performance during the second challenge.

Albeit, in the early phases of the third challenge, viewers saw Vell at odds with Dominique Wilkins, AKA Domo. The latter was not very happy about the fact that some of the designers did not know how to sew properly. His ire seemed focused on Alezander, who had won the second challenge despite his inexperience with a sewing machine. Domo’s behavior seemed to anger Vell, who is also not well-versed in the art of sewing. During the verbal spat, both claimed they would come out at the top, and the other would work for them.

The argument seemed to be a matter of the past when the time came for the modeling phase of the third challenge, with world-renowned skaters showcasing the clothes the designers had made for them. Vell was even appreciated for his styling choices, though he was asked to keep the safety aspect in mind, given the number of holes in his pants and how they expose the legs during skating.

All seemed well and good when Khanh Ngo was declared the winner of the challenge. Yet, when the participants returned to the work area waiting for the judges to deliberate, they realized that Vell was missing. Host Speedy Morman addressed the contestants and shockingly informed them that he was asked to leave due to “some of the unfortunate decisions” that he had made off-camera. Vell’s actions allegedly broke the off-camera rules that were to be adhered to by the participants, and he was asked to leave. 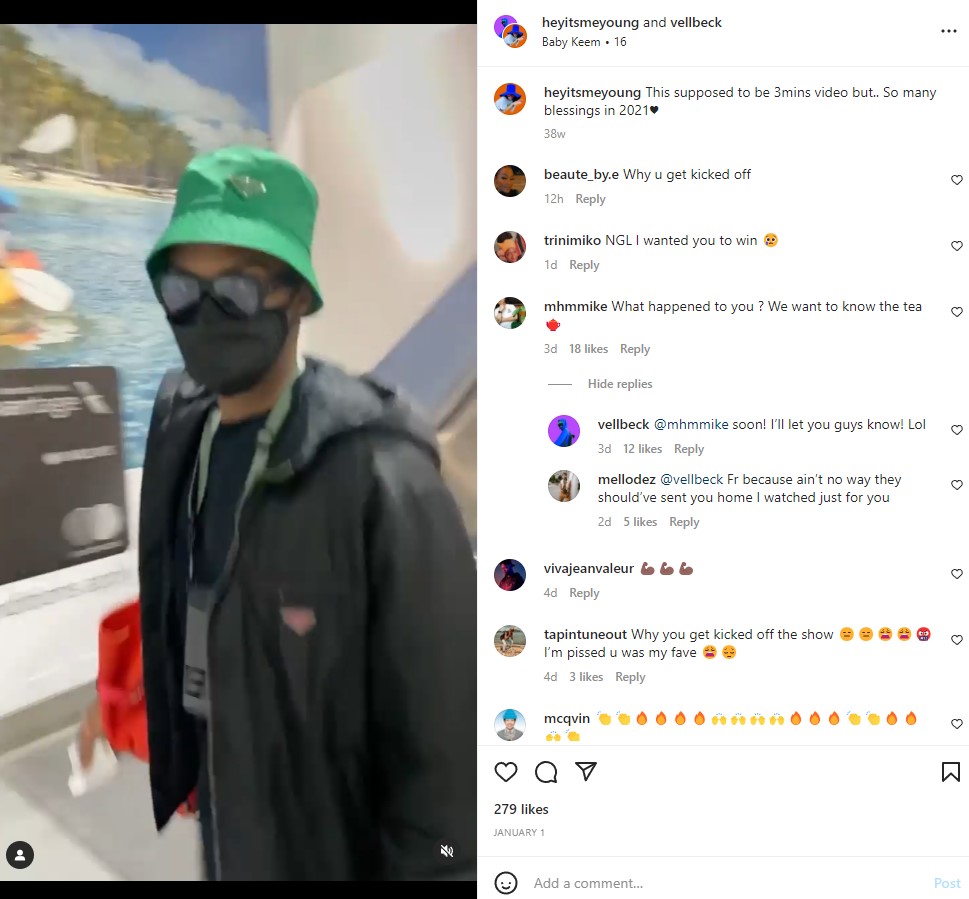 Since Speedy did not elaborate on what led to Vell’s elimination, fans have been wild with speculation about the same. The abrupt nature of the exit has everyone asking what the designer could have done. Many have theorized that Vell’s behavior may be related to his argument with Domo. In addition, his lack of presence on the show’s social media handles had not gone unnoticed.

Fans reached out to Vell about his departure from the show through the Instagram comment section. Eventually, the designer did reply to one such comment and stated that he would soon let the public know what transpired. Nonetheless, there have been no official announcements from the showrunners regarding the event.

Where is Vell Beck Now?

Presently, Vell Beck seems to be more focused on his career than ever. The artist has gained much attention due to his appearance on ‘The Hype’ and has witnessed a significant boost in popularity. Though not highly active on social media, the Harlem-based designer does interact with the public when required.

As of writing, Vell is still working intently to make his brand, VBNYC, popular; those interested in buying clothes from the brand’s collection can do so through its online portal. Moreover, he is in a happy relationship and likes to spend quality time with his partner. Regardless of what transpired on the show, we wish the designer the best in his life and hope he has a wonderful future ahead.