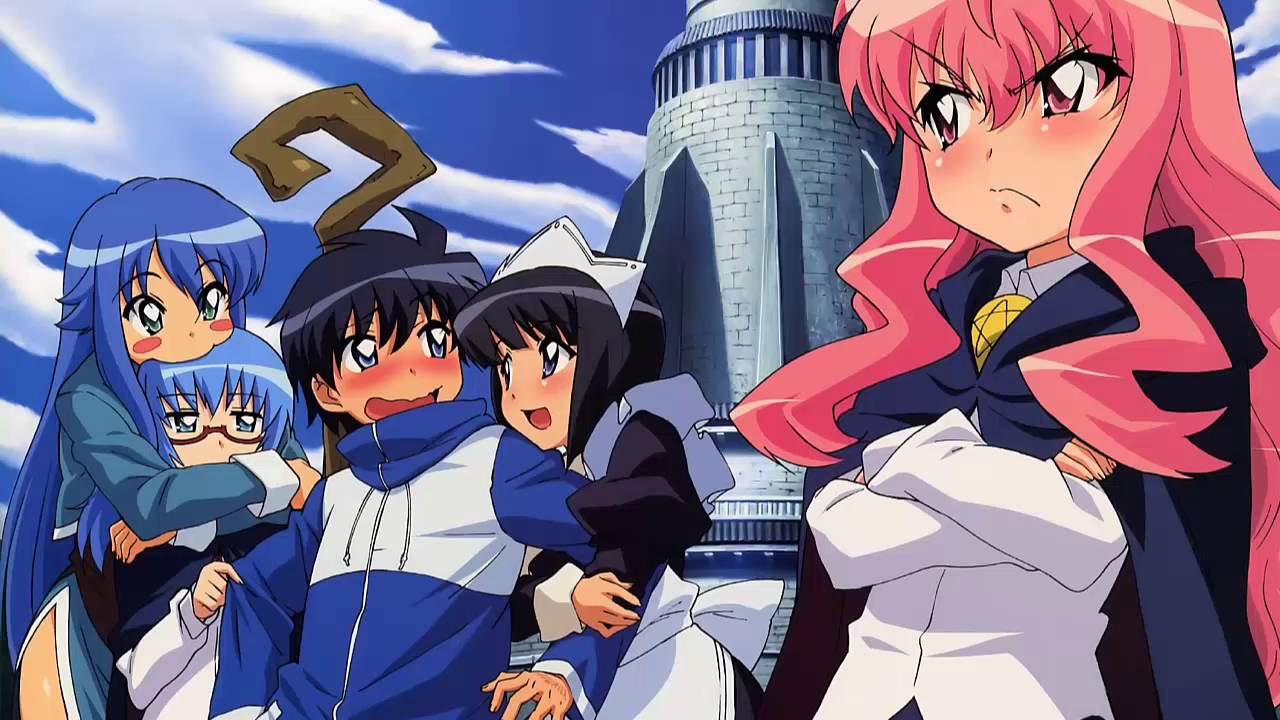 From the outside, ‘Zero no Tsukaima’, or The Familiar of Zero as it called in English, seems like your typical harem anime that expects you to keep your brain out-of-the-way. There’s absolutely nothing wrong with that because a lot of the times, you might just want to sit back, relax and watch something where you don’t have to worry too much about the negative outcomes or plot complications. While it does live up to what you expect out of it, surprisingly, it also proves to be a little more than what you would ask for from a typical harem show. Whatever you prefer watching on a particular day is more or less a reflection of your mood and there are days when you’re looking for something that is just pure and fun. For days like these, ‘Zero no Tsukaima’ is the best choice because it not only gives you that element of fun but also surprises you with its depth, thematically and emotionally.

The prime focus of most fantasy anime goes into the aesthetic side of the show where vibrant bright colors along with catchy soundtracks are used for portraying budding romance stories. ‘Zero no Tsukaima’ offers none of that and completely downplays the whole harem side of the story. Instead, it focuses more on a political thread which is something you may have never seen in any other anime of this genre. This set up might disappoint the ones who only enjoy the typical harem themed anime but for those with an open mind, it turns out to be quite surprising with its refreshingly new storyline. The only thing that does align well with the harem genre is its typical comedy that goes way overboard a lot of the times. But even then, I would say that it’s more of a fantasy, considering other elements of the show.

As for the central romance of the story, it unfolds with a surprisingly smooth pace considering the fact that each season only has 12-13 episodes. Not even once throughout the span of the show does it come off as stagnant or too draggy. Strangely enough, unlike most harem series that are written with the intention of being appealing to women only, ‘Zero no Tsukaima’ offers comedy that seems to be more appealing to straight men rather than women.

Overall, while there are many aspects of the anime that could’ve been much better, it manages to surpass your expectations. You may not absolutely fall in love with it but it’s the kind of series that you will watch all the way till the end and not regret wasting your time on it later. Out of the four seasons that are already out there, season two and four are the best because of their emphasis on character development. If you plan on watching ‘Zero no Tsukaima’, then just take your own time with it and let everything unfold at its own pace. It won’t really get any better with each season but it sure as hell will help you kill some time.

Zero no Tsukaima Season 5 Release Date: When will it premiere?

But unfortunately, the author of the show passed away before he could finish off writing the entire story. Which means that there is no proper conclusion to the story in the light novels. And that is why a whole new season seems very less likely but what we can expect is an OVA that brings proper closure to the anime. Our best guess is that in the unlikely scenario of the anime getting renewed, a new OVA or ‘Zero no Tsukaima’ season 5 could release sometime in 2021. We will update this section as soon as we hear more.

You can stream ‘Zero no Tsukaima’ on Crunchyroll with its original Japanese audio and English subtitles.

‘Zero no Tsukaima’ centers around a character named Louise Francoise Le Blanc de La Valliere, who is a lonely magician in a world that is full of spells, charms, cloaks, and wizardry. Her biggest problem is that when it comes to magic, her skills are rather unpolished and every time she tries to cast a spell, something goes terribly wrong. Because of her constant failures, her classmates start calling her “Louise the Zero”.

One fine day, while performing a summoning charm in school, Louise ends up creating a huge explosion, which is assumed to be another one of her failures. But as the smoke starts to clear out, a human figure of a boy named Saito Hiraga steps out. Louise, being his creator, enslaves him and makes him clean all her clothes and wash her dishes. He is even forced to eat off the ground and stay with her in the most ruthless conditions. But all of this changes when she finds a strange brand marked on the boy’s arm, which seems to have links with the renowned Gandalfr. Saito discovers a new life now while Louise tries to prove others wrong by showing them her true potential. This is the basic premise of season 1, which is followed by three more seasons that dive deeper into the magical adventures of Louise and Saito. 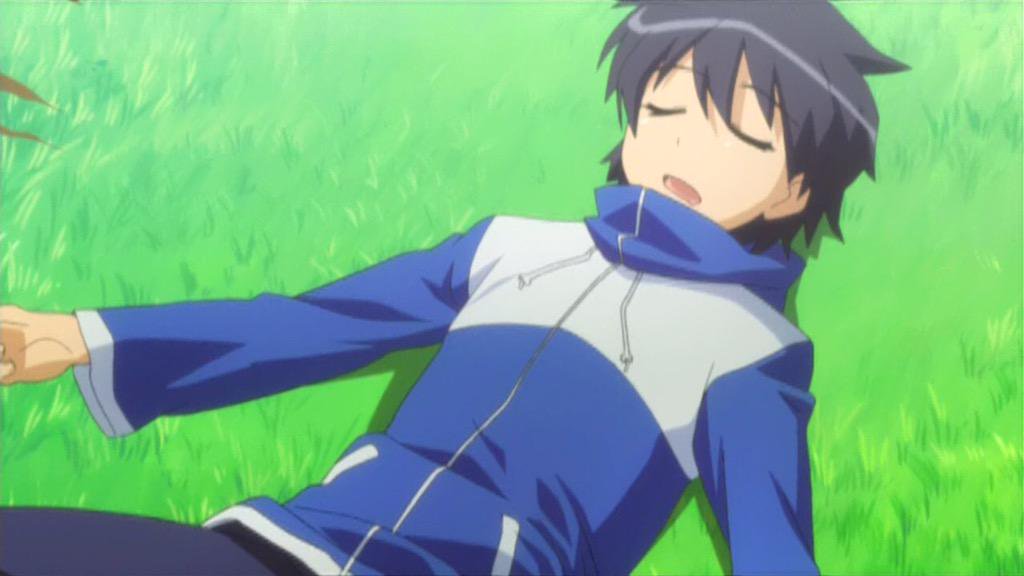 Unlike Louise, Saito is just a normal human being who resides on Earth, specifically in Tokyo. He picks up his laptop one day to get it repaired at a store nearby and that’s when a portal of some sort opens up right in front of him. Out of curiosity, he touches and gets sucked right in. When he reaches the other side, he is all disoriented and has no clue where he has landed. Louise takes him for granted and treats him like a slave who does all of her household work. When he first arrives on the other side, he is also extremely clueless about the language they speak but somehow, one of Louise’s spells backfires again, which gives him an inbuilt translator.

Saito is also portrayed as a pervert a lot of the times, who gets into some very complicated situations with women. He even starts to fall for Louise much later and openly expresses his feelings for her. Despite his obvious acts of perversion with other girls, he deeply respects Louise and even gets jealous every time she is approached by another guy. Even when he is forced by his guy friends to sneak into the girls’ washroom, he tries stopping them just to protect Louise.

Saito also proves to be a little manipulative at times, when he uses the emotions of his opponents during battles to reveal their vulnerable side. Even with Louise, whenever she loses her temper, he uses her emotional weaknesses against her to defend himself. Unlike most others in the magical world, Saito sees people for who they are and does not judge them on the basis of their magic skills. Coming from the real world where technology is blooming, he is very well aware of the egotism that emanates from the ones who hold power and it comes off as no surprise to him when he notices the same in this magical world. 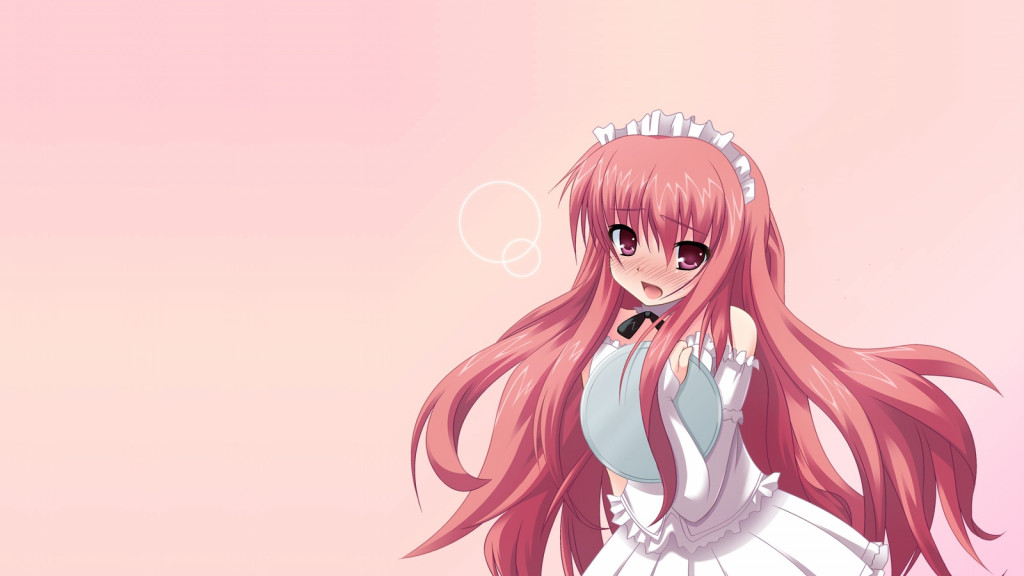 Louise is the third daughter of the Valliere Family that is very well known in the Tristian world. She studies magic at the Tristian Academy but because of her lack of magic skills and her history of disastrous spellcasting, she has been labeled as “Louise the Zero”. She is quite petite compared to her peers and has long pink flowing hair that matches her pink eyes. She has a very complex personality and often she tries to act all noble and wise because of her upbringing. But this never ends well for her and results in her either being very reckless or losing her temper over the pettiest of things. She is often ostracized by pretty much everyone, including her family because of her failures as a magician. This later motivates her to push herself beyond her limits so that she can be loved and accepted by everyone in the magic community.

Initially, when she meets Saito, she treats him like a dog and punishes him every time he disobeys her. But later, she realizes that he actually cares for her and starts getting attached to him. The more she gets attached, the more she feels like she’s falling for him. This reaches a point where she tries to spend all her time with him and also gets jealous when other girls try to approach him. At times, she worries about him so much that she even drives him away because of her bad temper. Though they get quite a rocky start to their relationship, things eventually do work out for them.