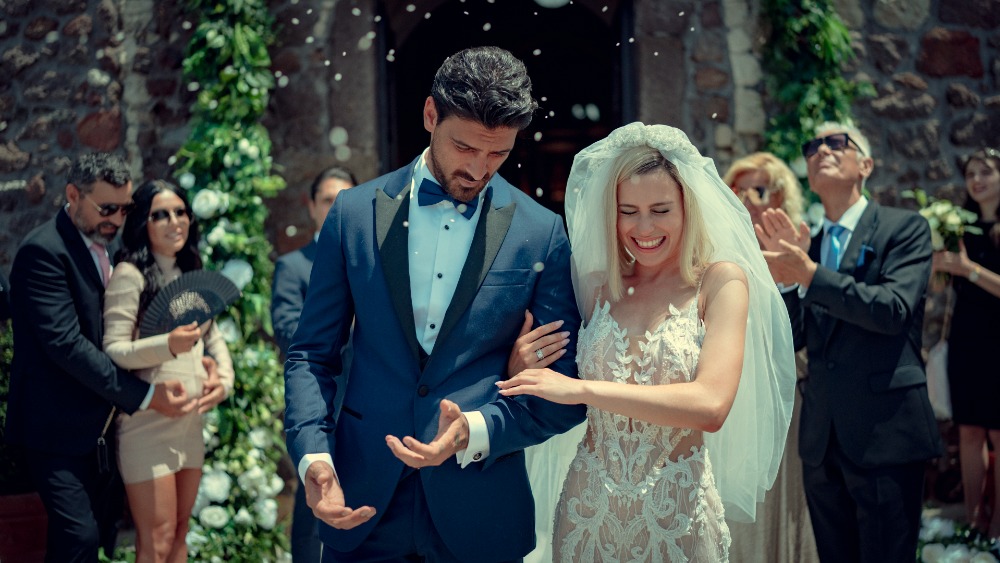 Despite the widespread criticism that ‘365 Days’ received for glorifying sexual violence and mafia life, it was a massively popular film. In the sequel ‘365 Days: This Day,’ the filmmakers have apparently decided to unceremoniously ignore what the critics said and stick to what has worked commercially in the first film. The two films are based on the first two books in Polish author Blanka Lipinska’s ‘365 dni’ trilogy.

In the first movie, Massimo Torricelli (Michele Morrone), the scion of a powerful Sicilian mafia family, sees Laura (Anna Maria Sieklucka) on the day his father is killed and subsequently becomes obsessed with her. He has his subordinates kidnap her. Massimo then informs her that he plans to keep her captive for 365 days so that she will fall in love with him. And Laura eventually does. She also becomes pregnant.

The sequel begins on the eve of Laura and Massimo’s wedding. But troubles soon find the couple after Laura comes to think that Massimo has cheated on her. Here is everything you need to know about the ending of ‘365 Days: This Day.’ SPOILERS AHEAD.

Somewhat predictably, ‘365 Days: This Day’ begins with Laura and Massimo having sex. They are in their respective wedding dresses and aren’t supposed to see each other, but one thing that these characters can’t be blamed for is being conventional. Laura’s best friend Olga (Magdalena Lamparska) walks in on them right after they have finished, and indignant shouting ensues. After Massimo has left, it is revealed through the girls’ conversation the snippets of what happened in that tunnel at the end of the first film. Laura survived the incident, but her baby didn’t. She hasn’t told Massimo yet, fearing that an all-out war will break out between rival mafia factions because she knows that Massimo will seek vendetta.

After the honeymoon period is over, Laura starts to feel bored and stifled in her life as a mob wife. This is when she meets Nacho (Simone Susinna), a man with Spanish roots who claims to be their gardener. He seems to leave a deep impression on her despite the short conversation they have.

Laura and Massimo celebrate Christmas with Laura’s parents, Olga, and members of Massimo’s organization. Massimo has realized that his wife needs to do something to keep herself busy and has acquired a clothing company for her to run. That night, after sex, the two of them speak about family, and Massimo ends up revealing that he has a brother. When Laura tries to get more information out of him, he all but flees from the room. While all this is happening, a romance takes shape between Olga and Domenico, and they get engaged.

While Laura is still angry at Massimo, they throw a party at their home. At one point, Laura thinks that she sees Massimo leaving with Anna (Natasza Urbańska) and follows them. When she finally tracks them down, they are having sex in one of the rooms of her own home. Enraged and humiliated, Laura rushes out of her house and runs into Nacho, who is about to leave for his home. He offers to take her away, and she gladly accepts it. The following morning, Laura calls her mother to tell her that she is leaving Massimo before throwing her phone away.

Nacho takes her to his home, a rustic and spacey house that Nacho claims belongs to his father. When Laura asks him about his father, Nacho is incredibly evasive. Either way, Laura genuinely seems to enjoy herself in the company of Nacho and his heavily pregnant sister Amelia. Even if the latter’s condition reminds her of her miscarriage, she grows close to the other woman. Believing that Massimo has betrayed her and desperately wanting to move on, Laura begins a relationship with Nacho. Elsewhere, Massimo employs the entire might of his organization to look for his wife.

It is eventually revealed that the man Laura saw with Anna wasn’t Massimo, but his identical twin brother, Adriano. Even in a mob family like theirs, Adriano is considered a bad egg. It is heavily implied that he was the cause of much grief for his and Massimo’s father. And his relationship with his brother isn’t any better either. Massimo doesn’t even tell his wife that he has a brother. Adriano collaborated with Anna, who is still angry that Massimo chose Laura over her, to sow discord in Massimo’s marital life. For Adriano, Laura is a blessing that he never expected. He realizes that she is his brother’s only weakness and decides to capitalize on that.

As for Nacho, he is revealed to be the son of Don Fernando Matos, the leader of a mafia faction that has been at war with Massimo’s family for generations. Don Matos sent Nacho to bring Laura to him. What neither he nor Nacho himself foresee is that the latter would fall in love with her. In the climactic scene, Laura is taken by Adriano and Anna’s men masquerading as Don Matos’. They deliver her to Adriano, and Laura immediately realizes that this is not her husband.

In the climactic scene, Nacho and Massimo find Laura after Adriano and Anna have taken her hostage. When Laura tries to get away, Anna shoots her, and she is then shot by Nacho. As Adriano attempts to shoot his brother, Massimo pulls the triggers first, catching Adriano on the shoulder. As Massimo clutches his wife’s unresponsive body in his arms, Nacho leaves.

Laura is most likely not dead. There is one more book in Blanka Lipinska’s trilogy, ‘Another 365 Days,’ and Laura is still the book’s main character. The third film has been reportedly shot simultaneously with the second one, so it’s pretty safe to assume that we will see Laura surviving her injuries. On the other hand, her marriage has hard times ahead. She and Massimo need to have a conversation about their trust issues and inclination to make stupid decisions.

What Happened to Laura’s Unborn Baby?

During their meeting, Don Matos tells Massimo that he and others have been worried about the rapid pace at which Massimo was expanding his empire. So, they decided to cause Laura’s accident, basically admitting that he and his associates are responsible for the death of Massimo and Laura’s unborn baby. However, at this point in the story, Massimo still doesn’t know that Laura was pregnant at the time of the accident. He finds out when Adriano reveals the truth to him, gleefully wondering whether the child would have looked more like their father or mother.

This is when Laura tries to rush to her husband, and Anna shoots her. This probably sets up the narrative for the next film. As mentioned above, Laura didn’t tell Massimo about her pregnancy because she feared that he would seek vendetta. Now that he knows of the loss he has suffered, Massimo will change, and the monster he has managed to keep restrained until now will emerge from within him.