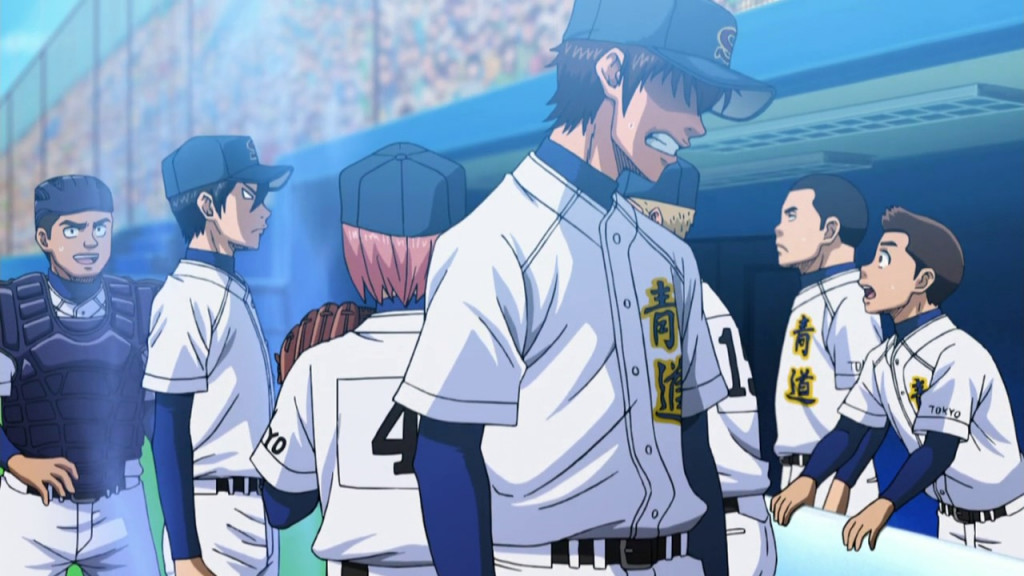 It does not really matter if you’re a baseball fan or not; ‘Ace of Diamond’ is one sports anime that you’ll absolutely love if you’re looking for something motivational. It follows a pretty simple storyline where a team of underdogs aims to rise to the top. It also explores individual storylines of all the main characters and develops them accordingly. But one thing that really stands out about it is its element of suspense. Most sports anime become quite predictable because the primary teams usually become winners in one way or the other. But in this one, the main team loses some of the matches.

Even the individual stories of the characters head into directions you cannot initially predict. And the baseball game scenes have also been perfectly executed. Coming from two of the greatest anime studios, Madhouse and Production I.G, the animation is just flawless and gives off the perfect shounen vibe. Overall, ‘Ace of Diamond’ is one of the best sports anime out there and I would recommend it to anyone who enjoys watching uplifting shows.

Ace of Diamond Season 3 Release Date: When will it premiere?

‘Ace of Diamond’ Season 3 premiered on April 2, 2019, and considering that it will have a total of 52 episodes, it is expected to conclude sometime in March, 2020. So far, this sports anime has had an unprecedented demand and it seems very less likely that the creators would just stop here.

The anime has been adapted from a manga series which has been consistently receiving new content since its release in 2015. Considering this, it does not seem like the anime will end anytime soon.

As of now, it is a bit too soon to predict anything about the show’s future but looking at how promising its growth has been to date and also considering its previous release schedules, we can expect the next season by April, 2021. As soon as we get any confirmed news regarding ‘Ace of Diamond’ Season 4, we will update it here in this section. Till then, you should also check out our list of other similar sports anime shows.

Unfortunately, an official English dub of ‘Ace of Diamond’ is not available yet, but you can still stream the anime on Crunchyroll with original English audio and Japanese subtitles.

‘Ace of Diamond’ centers around a young schoolboy named Eijun Sawamura who ends up losing his final middle school baseball game. Disheartened by his defeat, he promises his teammates that he’ll take them all the way to the National Tournament once they reach high school.

But later, after an unexpected turn of events, a prestigious high school recognizes his extraordinary pitching skills and invites him join their team. His teammates encourage him to go and he finally sets off on a new journey. In this new team, every player is extremely skilled and he struggles to make a name for himself. But determined as always, he declares that he’ll outshine everyone to become the “Ace” pitcher of the team. But before he is able to prove his worth, another pitcher named Satoru Furuya steals his title with his unusual fastballs. As the teams strives to become the best in Japan, Eijun starts his own personal journey toward becoming the best pitcher the world will ever see.

Eijun, who was once a pitcher at the Akagi Middle School, now plays for the prestigious Seidou High School. He’s a left handed pitcher and also bats with his left. His pitches are known to be unusually flawless and till date, no one has been able to imitate his style. His batting isn’t all that great and even his outfield defense is generally poor. Whatever the odds may be, he always shows a lot of spirit and never gives up. Apart from playing baseball, he also enjoys catching beetles and watching sumo wrestling.

Satoru is a right handed power pitcher who also plays for Seidou High School. He is quite tall for his age and has medium length straight black hair. Though he always has a lethargic look on his face and stays disconnected with the people around him, his pitches are so fast that no one even likes to play against him. He puts a lot of effort into his pitching and that’s why he expects his catchers to do the same. He has a lot of respect for Miyuki because he’s one of those few players who are able to catch his pitches.