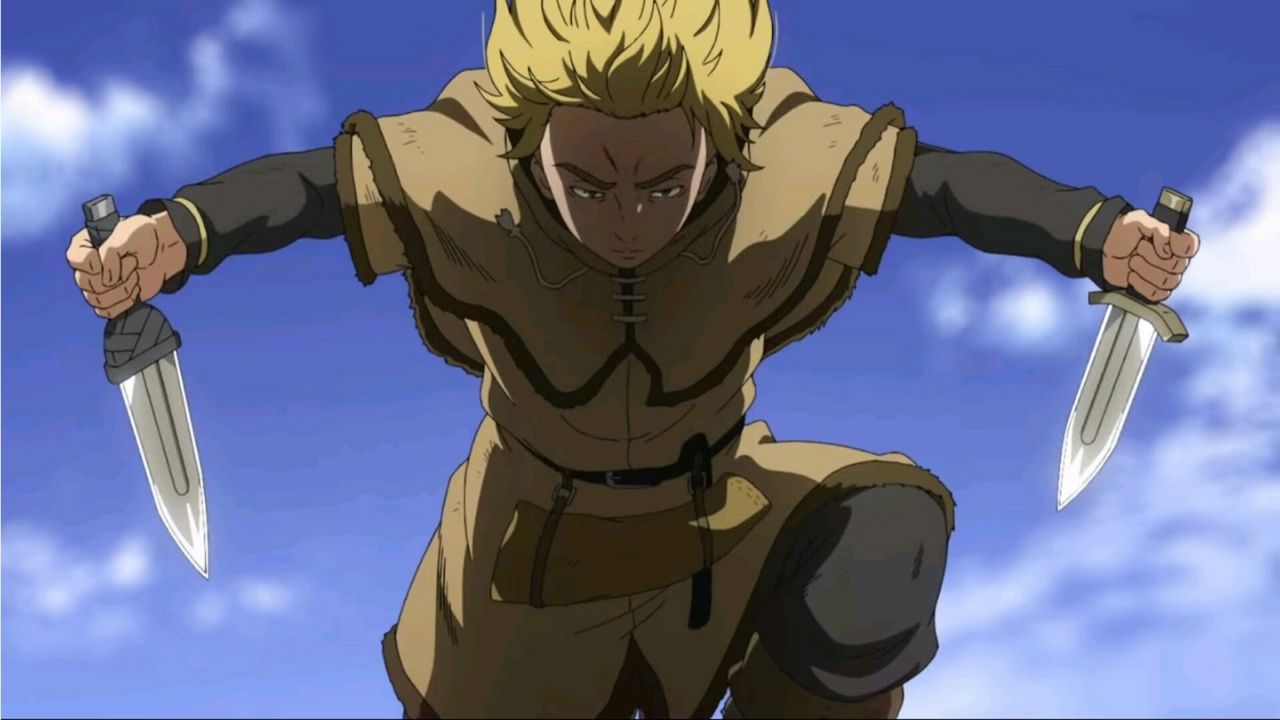 Wit Studio has taken the world of anime by storm with its recent shows. If you’re tired of looking at the same old anime shows, ‘Vinland Saga’ is a recent Seinen that offers something very different from what you’ve ever seen before. If you’ve ever been interested in Norse and Viking mythology then the first scene of this itself anime will be enough to immerse you into its action-packed story. What’s even more impressive is how a lot of aspects of its plot are actually based on real historical events. Wit Studio has done an outstanding job with its action scenes that are absolutely brutal. While the creators have done justice to the source material, they have also made an attempt to further develop the main character by including original episodes.

The animation style of the show perfectly fits in with its medieval setup and is absolutely engrossing. Even the CGI has been carefully used and is certainly not half as bad as many other anime out there. Both the opening and closing themes are quite edgy and perfectly portray what the anime is all about.

Overall, so far, Wit Studio is doing a great job with this anime and if they continue creating a faithful adaptation of the original manga, then this might just turn out to be the next ‘Attack on Titan‘. However, ‘Vinland Saga’ has nothing to do with any of those old classic shounen series and it also does not fall in the same category as most modern shows. So it may not really suit everyone’s taste. But if you manage to keep an open mind and stick with it for a long period of time, it will turn out to be one of your favorite anime of all time.

Vinland Saga Season 2 Release Date: When will it premiere?

‘Vinland Saga’ Season 1 premiered on July 8, 2019, and aired for a total of 24 episodes. The anime has received rave reviews for all the action and drama that it offers.

As far as ‘Vinland Saga’ Season 2 goes, there has been no official confirmations yet and it’s also a bit too early to say anything about it. But looking at the rate at which it is getting popular, we can certainly say that it’s already more or less of a classic in the making and there will be a lot more to it in the future. The anime is adapted from a historical manga series that goes by the same name. The last volume of this manga was issued back in August, 2018 and has a total of 21 volumes with 152 chapters.

In a span of just 24 episodes, it was always going to be impossible to fit in all the 152 chapters of the manga. On top of that, the mangaka will be forced to publish more content because of the growing popularity of the anime. Moreover, if we look at other popular anime produced by Wit Studio, which includes ‘Attack on Titan‘, they clearly take their time with their shows and usually go for more than one season. Our best guess is that ‘Vinland Saga’ season 2 will most likely release sometime in July, 2021. If you had a great time watching ‘Vinland Saga’, you should definitely check out our list of other similar adventure action anime.

Surprisingly, despite its popularity, ‘Vinland Saga’ has not received an English dub yet, but you can still stream it on Amazon Prime with its original Japanese audio and English subtitles.

For anyone who is interested in Norse and Viking mythology, ‘Vinland Saga’ is a great historical war drama that will definitely impress you. It revolves around Thorfinn who comes from the family of the legendary Vikings. With their thirst of violence, the Vikings have established themselves as the strongest warriors. After Thorfinn’s father is murdered, he decides to spend his entire boyhood to train himself for the gruesome battlefield. Determined to enhance his skills to the utmost perfection, Thorfinn will do anything in his power to avenge the death of his father.

Askeladd was once a cunning Viking who commanded a mercenary band that included the main protagonist, Thorfinn. In appearance, he might look like any average man but he is strong enough to bisect anyone using his sword. He is half-Welsh half-Danish and he sports short blond hair with a french beard that surrounds his entire mouth. He has deep wicked eyes and he wears a strong black breastplate during battles. A lot of times, he intentionally gives the impression that he’s weak and vulnerable just to fool his enemies, but he is actually the complete opposite. He deceives his enemies by giving them a false sense of overconfidence and as soon as they bring their guard down, he lashes out on them to get an easy victory.

Since the age of 11, he has shown prodigal swordsmanship and has been able to defeat multiple opponents all by himself. Even when it comes to other weapons, he is naturally able to use all of them to their full potential. He’s a master at creating tactics and also possesses the ability to manipulate the ones around him. He is also able to put his leadership skills to good use and often turns his own strongest enemies into allies. After spending years with other evil men, he has developed the ability of instantly reading any man who crosses his path.

Canute is the King of Denmark and England. He has long blond hair and piercing blue eyes with pouty lips that make his face look feminine. During his late teens, many even assumed that he’s a girl. Later, after becoming the King, he cut his hair really short and even grows some facial hair. Initially, he is timid and tries to hide behind his superiors all the time. He also gets terrified quite easily and all of his enemies try to exploit his cowardly nature. But later, he starts to stick up for himself and grows into becoming a strong leader.

Further in the series, he becomes a ruthless manipulative character who is willing to destroy anyone who comes in his way. When it comes to fighting, he is fairly average. He is better known for his cunning personality and deceiving feminine looks that he uses for seducing male characters.

Thorfinn was born in Iceland and had a pretty good upbringing. From his childhood days, he had always been a passionate fighter who would use his wooden sword to fight with his friends. He has brushy blond hair and wears old dirty clothes. During the present events of the anime, he has an angry face but he used to be a very cheerful kid when he was younger. He would always go out looking for an adventure and innocence reflected from his eyes. He even had a very good relationship with his family and would enjoy the adventurous stories that Leif told him. But when he sets out to avenge his father’s death, he slowly turns into a cold-blooded killer who cares about nothing else in the world.

After joining Askeladd’s band, he isolates himself from everyone else and even refuses any kind of invitations from his fellow Vikings. He even chooses to have his dinner all by himself. But this impulsive behavior further leads to his downfall. Undoubtedly, he is extremely talented for his age but his short temper proves to be his biggest weakness. After his father’s death, he directly exposes himself to the battlefield just to make sure that he trains himself for the worst of experiences. This is the reason why he even proves to be a much better warrior than Vikings, who are twice his age. His style of fighting is nimble and instead of focusing on clashing blades with his enemies, he strives to directly go for their vital points. Though knives are not his primary weapons, he is extremely skilled at throwing them. His speed and reflexes are considered to be his primary assets during battle.