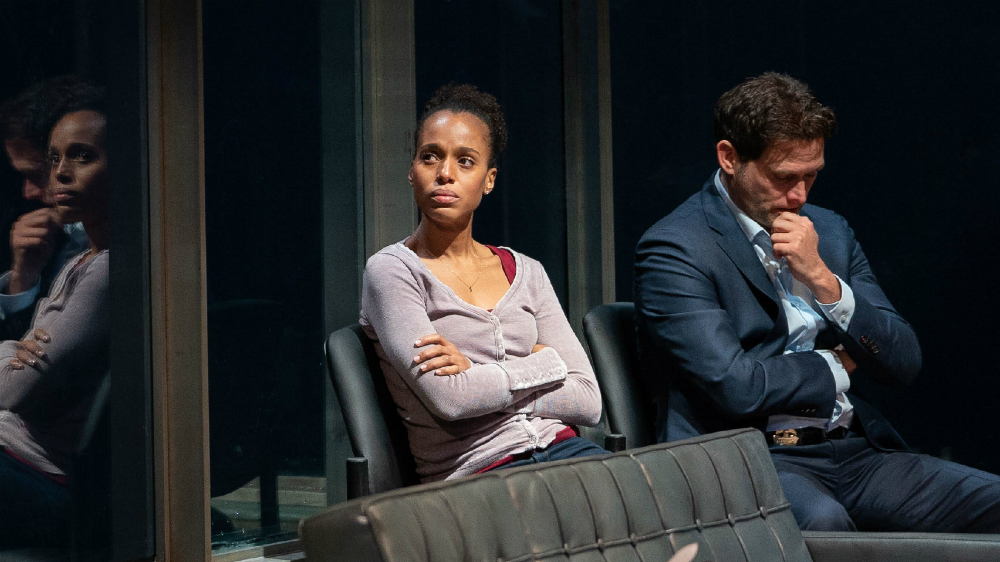 With a dreary rainy backdrop, ‘American Son’ starts off with an abutting shot of a wearisome mother who frantically stares at the clock that strikes four in the morning. Her son has gone missing and her unduly imaginative mind is leading her to believe that something is wrong. In the past, several films like ‘Fruitvale Station’ have shed light on the toxic segregation that still exists in American society. Directed by Kenny Leon, ‘American Son’, which has been adapted from a Broadway play by Christopher Demos-Brown, aspires to tread a similar path and heavily reckons upon the conversations of its characters to penetrate even the hardened hearts with its moving story.

Kerry Washington plays the role of a troubled mother, Kendra, who, with time, grows more and more distressed about the fact that her son has gone missing. After waiting for a long time at the police station, a white officer (Jeremy Jordan) finally steps in to address her problems. Though he seems to be a little negligent towards her pleas in the beginning and even claims that her son is probably busy doing “something that all teenagers do”, he later shows some mild signs of empathy when he finally realizes that she is actually going through a lot.

Soon after this, the boy’s father, Scott Conor, who is also a white FBI agent, shows up at the police chamber and with this, the behavior of the other white Cop entirely changes. He starts addressing the case with a sense of false maturity and even reveals details that he had previously kept hidden from his wife. As the film moves forward, the waiting room is flooded with condescending conversations—mostly between Kendra and Scott—who argue over their racial differences and try to comprehend how it might have had reflected on their son.

The entire film is confined to the waiting room of the police chamber and for the most part, it heavily relies on the interactions and dispositions of its characters to move the plot in a linear direction. While the pacing of the story seems pertinent and it also does a great job with evoking a sense of curiosity as it gradually leads you up to a heart-rending ending, it often gets lost in Kendra’s rants that–as her ex-husband would say–revolve around lines the of “Black Lives Matter”. Speaking of Kendra, who is the overarching protagonist, for the first half of the film, she comes off as an excessively protective mother and as much as you sympathize with her motherly concern for her 18-year-old son, it seems like she’s a bit too inclined towards believing that the whole world is against her race.

From the very beginning, it is very well established that, despite the divorce of his parents, Jamal has always had a very protected and warm upbringing where he never got himself involved with anything that even mildly qualifies as illegal. Jamal’s entire background and how his own parents perceive him, affirms that he is a good kid and would never intentionally get himself in trouble.

While the other white cop keeps beating around the bush by claiming that he’s following protocol, for a while, even Scott seemingly favors the cop and even claims that his son was starting to look like a gangster. He even tries to act as a dominating figure and often mansplains the opinion of his ex-wife who now, after their divorce, has become more stern and bold about her stance on things. But eventually, when the seriousness of the situation hits him, he begins to crumble under his own insecurities and loses his toxic masculinity to his vulnerabilities.

As far as the acting is concerned, Kerry Washington, who is well-known for her role in ‘Django Unchained’ and ‘Scandal’, has an impactful presence on-screen. For the greater part of the story, she perfectly encapsulates her character’s skewed sense of racial injustice and during the final scenes, she very well portrays the personal insecurities that led her to overly obsess over her son’s safety in the outside world. The performances of other characters feel rather subdued, especially that of Steven Pasquale, as he fails to depict the sense of denial and rue of a grieving father.

Overall, the movie has the right intentions as far as throwing light on racial policing and sexism, but it often loses its hold when it presents contradicting ideas by reflecting on the psyche of its characters. Some of its dialogues, that hold strong didactic messages, really hit hard but for the most part, it lacks the emotional depth that would be necessary to move its targeted audience. ‘American Son’ is fairly decent but from the looks of it, what worked rather well on stage does not really transition too effectively on screen and it falls short of what it intends to be. So at the end of the day, even if you pass on the opportunity of watching it, you won’t really be missing out on much.