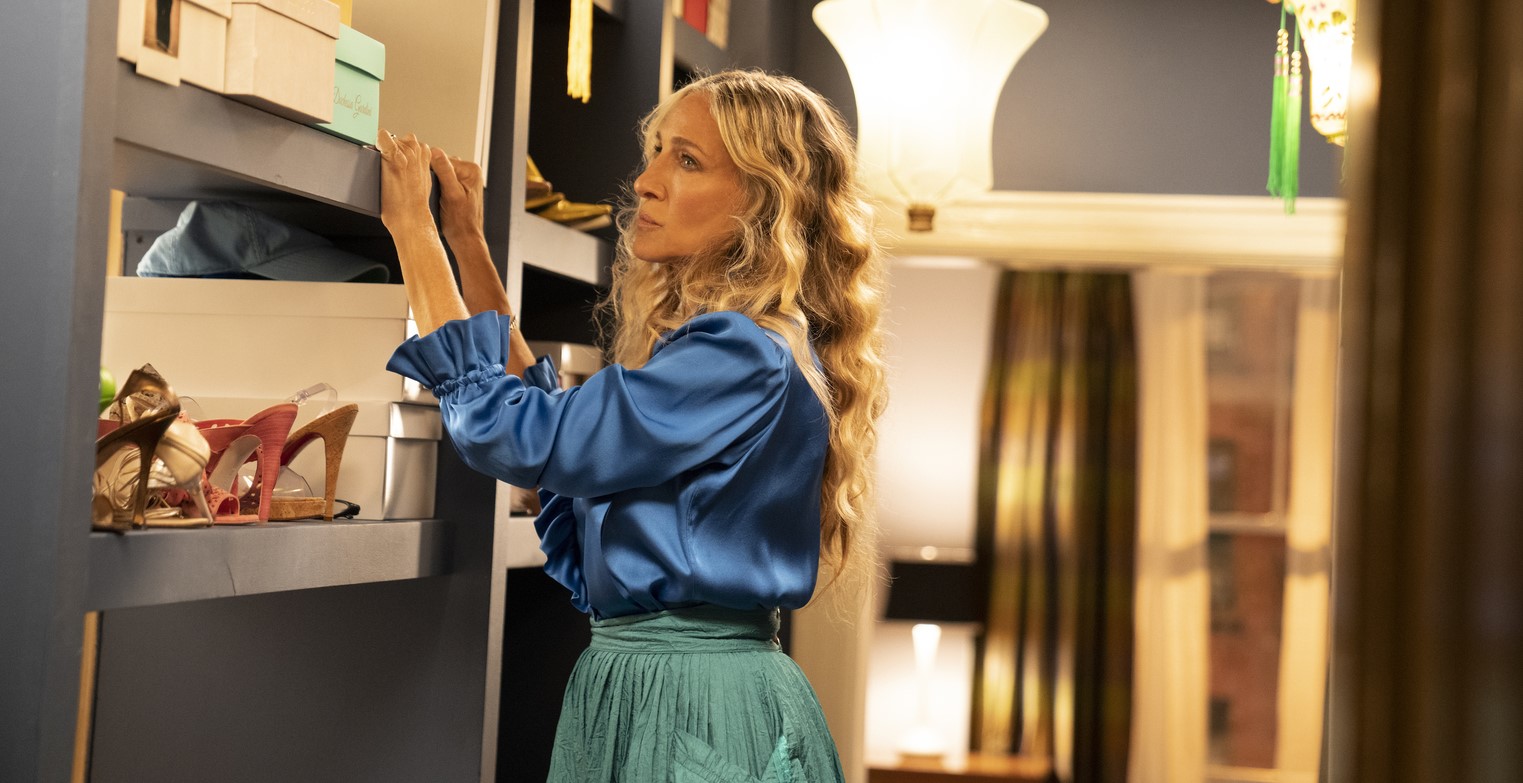 The ‘Sex and the City’ reboot, ‘And Just Like That…,’ explores the lives of Carrie, Miranda, and Charlotte, who are now in their 50s. By updating the OG romantic comedy to suit contemporary concerns regarding race and gender, the HBO Max limited series, heralded by Michael Patrick King, sees the iconic New York City-based trio establishing friendships with fascinating women of color.

In the first three episodes, we find out that Carrie stars in Che Diaz’s podcast, Miranda is pursuing a Master’s degree in Human Rights, and Charlotte wants to become close friends with the documentarian Lisa Todd Wexley. However, unfortunately, Carries world is soon shattered when Mr. Big dies of a heart attack.

Although her friends console her, Carrie ultimately finds some solace after going back to her old apartment. Meanwhile, we see Miranda initially annoying Dr. Nya but eventually becoming friends with her. On the other hand, Charlotte deals with Rose’s revelation about their gender. In episode 4, the three women forge new friendships and touch upon old sorrows. Here’s everything you need to know about ‘And Just Like That…’ episode 4. SPOILERS AHEAD.

The episode opens with Carrie waking up in her old apartment. Elsewhere, after a brief PTA discussion, Lisa Todd Wexley takes Charlotte aside and invites her and Harry to her husband Herbert’s birthday dinner. In the same breath, Charlotte invites Lisa to meet her friends on Thursday. Meanwhile, Brady and Luisa notice that Miranda smells like weed after her night out with Che.

Soon, Carrie hesitatingly returns to the apartment on Fifth Avenue. Later, she tells Miranda and Charlotte that she is going to sell her and Mr. Big’s apartment. Afterward, a worried Charlotte stops Miranda from ordering another bottle of wine. Then, Carrie meets Seema Patel, who immediately says that they need to get rid of all the decor in the house to make it suitable for buyers.

Later, Carrie smokes one of Seema’s cigarettes in the car when her newly-made acquaintance gives her a lift. At the podcast studio, the producer Chloe, unable to read the room, informs Carrie that she needs to up her social media game as her feed is currently dead. 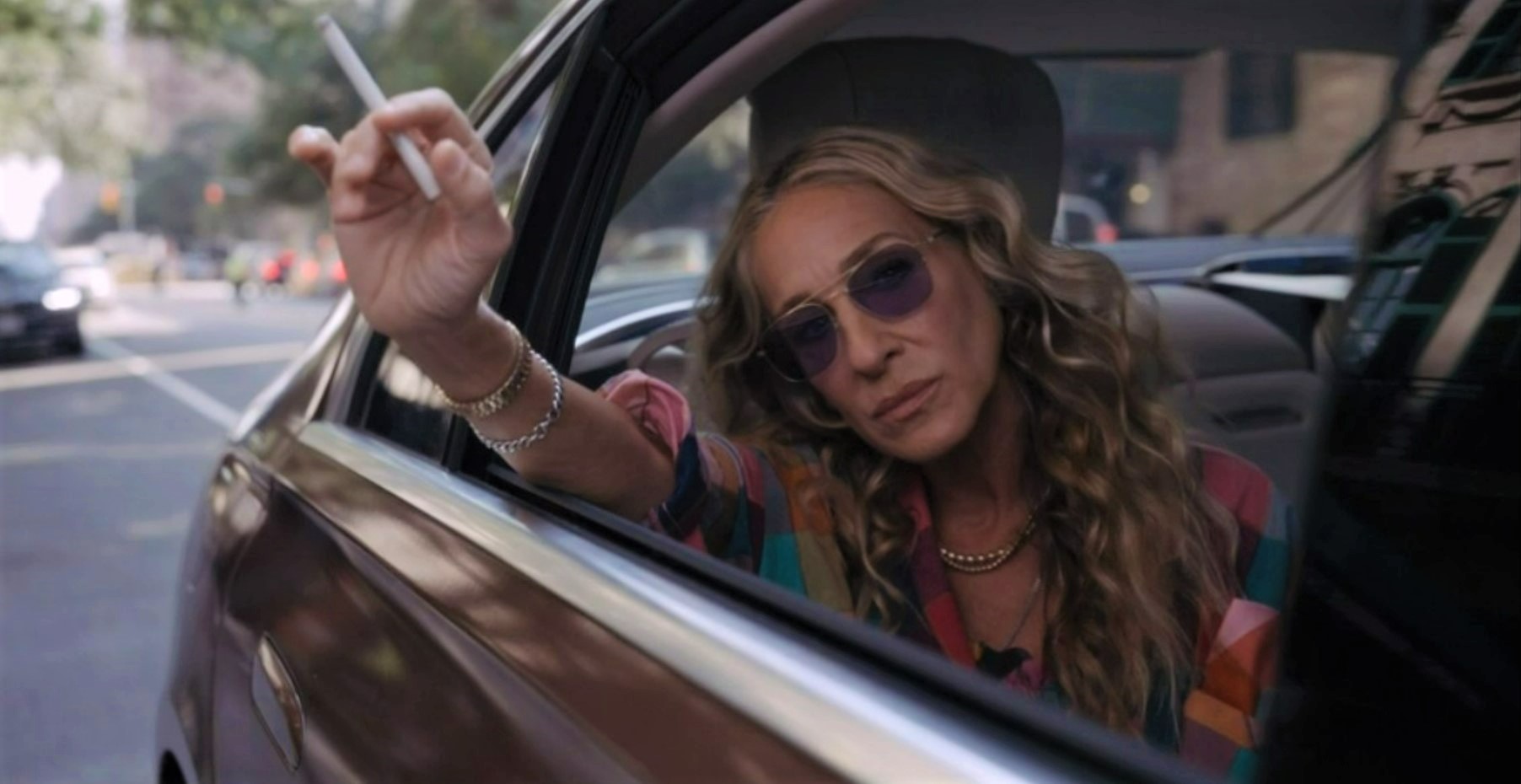 Charlotte panics about meeting Lisa and Herbert for dinner. However, Lisa soon cancels the Thursday plan; Charlotte then continues to fret over Herbert’s birthday dinner. On the other hand, Miranda and Dr. Nya have an intimate conversation about motherhood. Elsewhere, Seema and Carrie go to an open house. As the two start bonding over drinks, Carrie unwittingly makes a faux pas.

Later, Charlotte and Harry go for Herbert’s birthday dinner. We see that the Goldenblatts are nervous about meeting the friends and family of the sophisticated Lisa. When Carrie returns to Mr. Big’s apartment, she notices that the Peloton is back; she moves her late husband’s ashes into another room. At the Wexley household, Charlotte defends Lisa in front of her mother-in-law, Eunice.

And Just Like That… Episode 4 Ending: Why is Carrie Selling Her and Mr. Big’s Apartment? Who is Seema Patel? Why Does Carrie Get Angry at Her?

Later, Carrie notices a letter from Stanford on her bedside table. As she reads its shocking contents, Anthony arrives at her door. Noticing that Carrie has started smoking again, Anthony begins to talk about his husband. Meanwhile, Lisa and Charlotte confess their initial fears regarding their friendship to each other. Then, Carrie gets angry at Seema when the latter accidentally breaks an item from Mr. Big’s apartment.

We realize that, three weeks after Mr. Big’s death, Carrie decides to move on from her grief by escaping the place where her husband’s presence is missed the most. We see how she gives away the Peloton to the doorman and starts sleeping in her old apartment — this is because she keeps thinking that Mr. Big will be there at their Fifth Avenue home whenever she returns. Everything in the home they built together reminds her of him, and so she decides to sell it.

Seema Patel, with her Mercedes bearing a customized number plate, is the self-made, no-nonsense realtor that Carrie chooses. Carrie and Seema instantly get along after the former asks the latter to make sure that the movers don’t touch her shoes; the realtor says that she understands the sentiment because she has given all her handbags names.

Carrie initially enjoys spending time with Seema; with her, Carrie can pretend that none of the sad things in her life have happened. However, she soon gets irked by how drastically Mr. Big’s house is transformed. Seema changes the apartment’s color palette to beige to encourage buyers to project their own decor ideas onto the rooms.

When Seema reveals that she accidentally broke a bedside photo in the apartment, Carrie gets angry. Because the photo is that of her and Mr. Big, Carrie vents about Seema’s carelessness and questions her standard of work. When Seema apologizes and says that she’ll replace the glass, Carrie gets more upset. We realize that Carrie is distressed because the photo used to be on Mr. Big’s side of the bed; its glass surface was touched many times by her late husband. Since everything is changing in Carrie’s life, the idea that one of her last material connections to Mr. Big is broken makes her spiral.

Seema apologizes again and admits that she may have been unsympathetic. However, she mentions that people sometimes don’t realize how insensitive they can be. Then, Seema confesses that Carrie’s offhanded remark of “I think it’s great that you’re still putting yourself out there” hurt her feelings and made her feel as though she was being pitied for still trying to find love on numerous dating sites. She reveals that she doesn’t wholly feel bad for Carrie because at least she has loved and lost.

The two women acknowledge their mistakes and decide to start afresh with some sushi. The episode ends with Carrie’s voice saying, “And just like that, we began our real friendship.” Clearly, Carrie and Seema are no more just a client and a realtor — they are on their way to becoming close friends. Perhaps it is good that Carrie now has a single, middle-aged, and highly ambitious companion, independent of her existing friends’ circle, because she can now have new experiences and get a fresh perspective on life.

What Happens When Charlotte and Harry Meet Lisa Todd Wexley (L.T.W.) and her husband Herbert for Dinner?

When Lisa invites Charlotte for dinner, the latter immediately asks her to come for a gathering with her friends. However, whilst talking to Harry, whose colonoscopy she cancels for the party, Charlotte realizes that they are “too vanilla” and have no Black friends. Thus, she tries to invite her neighbor, Shelly Jenkins, who is weirded out by her sudden interest in her and ultimately turns down the invite. Desperate, Charlotte invites Dierdre, the woman she dislikes in the PTA group. The plan, however, gets canceled.

Charlotte forces herself and Harry to read up on contemporary Black writers (such as Zadie Smith) before Herbert’s birthday dinner so that they can engage in educated dinner table talk. It’s obvious that Charlotte is out of her element. As soon as they arrive at the Wexley household, Charlotte creates an awkward situation by mistaking Lisa’s guest to be one of the few Black women she knows. Additionally, apart from Charlotte and Harry, everyone at the party is Black.

It is obvious that Charlette is uneasy about the topic of race in the sense that she isn’t sure of the appropriate words and behaviors that should be employed whilst talking to Black people. However, at the dinner table, when Charlotte finally stops overthinking about race, her genuinely cultured self emerges. When Eunice mocks Lisa’s art purchases and declares that they are basically overpriced useless entities, Charlotte rises to the occasion to defend her friend.

After all, let’s not forget that Charlotte used to run an art gallery and is currently on the board of the Metropolitan Museum of Art. She tells Eunice that Lisa’s paintings are important as they represent different facets of human experience and talent; almost unselfconsciously, Charlotte names all the Black painters whose works are all over Lisa’s wall and compliments her art choices. Later, Lisa thanks her for having her back.

When Charlotte and Lisa meet again for coffee, both women confess that they were worried about similar things — Charlotte was worried about the Wexleys being the only Black couple and the Wexleys were worried about Goldenblatts being the only white duo at the dinner gathering. Charlotte even admits to Lisa how she approached Shelly and Dierdre in panic. We realize that, till now, Charlotte has never had to deal with the intricacies of race due to her privileged lifestyle. However, with Lisa as her friend, Charlotte is made to acknowledge her shortcomings and is forced to realize the perils of out-of-place political correctness.

What Do Miranda and Dr. Nya Talk About Over Dinner?

When Miranda and Dr. Nya go out for dinner, the professor confesses that she is moody due to her fertility medicines. Thus, the two women start talking about motherhood using casual legal lingo. Nya explains how she is on her second round of IVF but is unsure about whether she actually wants a child; she thinks she is pining after motherhood only because she’s afraid she’ll regret not having a baby later in life.

Miranda says she understands her predicament as she too has seen a close friend — Charlotte — struggle with fertility treatments. She also doesn’t sugarcoat the experience of motherhood (pertaining to Brady) and opines that it has its highs and lows. The two women have a deep conversation about maternal feelings and whether’s it’s possible for a working mother to “have it all.” “Your honor, if this round of IVF works, you’re gonna love motherhood every second,” Miranda concludes, emphasizing that whilst it may be hard to have it all, it is possible. Thus, their professor-student relationship changes into genuine friendship.

Where is Stanford? Are Stanford and Anthony Getting Divorced?

Carrie finds a letter from Stanford by her bed and opens it to find out that Stanford has gone to Tokyo. Stanford wrote her a letter because he knew he would cry if he met her in person and he did not want to subject his friend to more tears. Soon, Anthony arrives and explains that his husband is on tour in Japan because his client Ashley, a TikTok star from Long Island, is popular in Asia.

Carrie is annoyed at Stanford for not telling her about his trip in person. “‘By the time you read this, I’ll be in Tokyo,’ I mean, who is he, the last Brontë sister?” she exclaims. She also mentions that she would like to be included in her friends’ lives, even if she is in mourning. Then, Anthony mentions that Stanford, in his letter for him, stated that he wants a divorce. Carrie is shocked and Anthony says that the news is out of the blue because they were quite happy. It seems as though the death of Willie Garson, the actor who plays Stanford, is the reason behind this plot twist pertaining to Carrie’s gay best friend which requires him to be absent.

Additionally, we see that at the beginning of the series, Stanford and Anthony get into a bunch of small fights for no reason. Perhaps Stanford’s sudden departure to Tokyo is also driven by his need for space from his husband; the divorce might even be an exaggerated response. However, as of now, it does seem as though Stanford and Anthony are getting divorced. Thus, Stanford is the second friend of Carrie’s, after Samantha, to leave New York City and move abroad.

Read More: And Just Like That… Episode 3 Recap and Ending, Explained