And Just Like That… Episode 3 Recap and Ending, Explained

The romantic comedy-drama ‘And Just Like That…’ revolves around three middle-aged best friends, Carrie Bradshaw (Sarah Jessica Parker), Miranda Hobbes (Cynthia Nixon), and Charlotte York-Goldenblatt (Kristin Davis), who are based in New York City. As they tackle their 50s, they come to terms with several novel aspects of their present, and a few facts about their past. Using humor, glamor, and a keen sense of social awareness, the ‘Sex and the City’ revival series, heralded by Michael Patrick King, tries its best to update the source material and show the OG women and their diverse friends in a post-pandemic, socially conscious, and norm-challenging city.

In the first episode of the HBO Max limited series, we see how Carrie works at Che’s podcast called ‘X, Y, and Me,’ Miranda goes back to school for a Master’s degree in Human Rights, and Charlotte struggles with her two wildly different daughters, Lily and Rose. Then, tragedy strikes when Mr. Big dies of a heart attack. In the second episode, we see how Carrie mourns his loss; people long-forgotten begin to show up in her present. In the third episode, someone big from Mr. Big’s messy romantic past re-enters Carrie’s life. If you were looking for a recap and ending explainer for ‘And Just Like That…’ episode 3, you’ve come to the right place. SPOILERS AHEAD.

The episode opens with Che appreciating how much Carrie has improved at the banter required for the podcast. Later, Gloria, Carrie, and Miranda meet a lawyer for the reading of Mr. Big’s will. However, to everyone’s shock, it is revealed that Mr. Big has left $1 million for his ex-wife, Natasha Naginsky. Later, the four friends, Carrie, Miranda, Charlotte, and Stanford, discuss the will at a restaurant.

Carrie, already unable to sleep, is disturbed by the will and decides to go through Mr. Big’s belongings. In his wallet, she finds a photo that intrigues her. Later, we see Charlotte and Rose having a conversation about gender; the former is left confused and wonders worriedly about how to handle her daughter’s revelation like a supportive mother.

Carrie believes that her “happy sad ending” with Mr. Big — happy because of their loving marriage, sad because of his untimely death — is now ruined due to these unknown truths about his past. In a desperate move, she decides to reach out to Natasha, who works at Mina Minetti. After a series of awkward incidents, the two women encounter a situation where a conversation is possible. However, Natasha is clearly trying to avoid her late ex-husband’s widowed wife.

Afterward, Carrie, Charlotte, and Miranda go for Che’s comedy special taping. There, they enjoy hearty laughs and discover pertinent truths about the LGBTQIA+ community as well their own prejudices, assumptions, and inhibitions. Carrie and Charlotte head home after the stand-up show, but Miranda decides to stay back and go for the afterparty.

Later, we see Carrie walk past her current residence — a penthouse atop a tall building on Fifth Avenue — and go instead to the brownstone studio apartment of her youth at 245 East 73rd Street. Her voiceover states, “And just like that, I walked myself home.” At this point, we know that walking is helping Carrie process her grief; perhaps returning to her old apartment will provide her with a sense of stability.

Carrie begins to stalk Natasha after Mr. Big’s will brings attention to her name and person again. She is upset not about the money but the fact that her husband thought of his former wife in the first place. Carrie decides to email Natasha to get answers; she cannot stop thinking about how Mr. Big may have had some contact with his ex-wife before his death and during his time with Carrie. 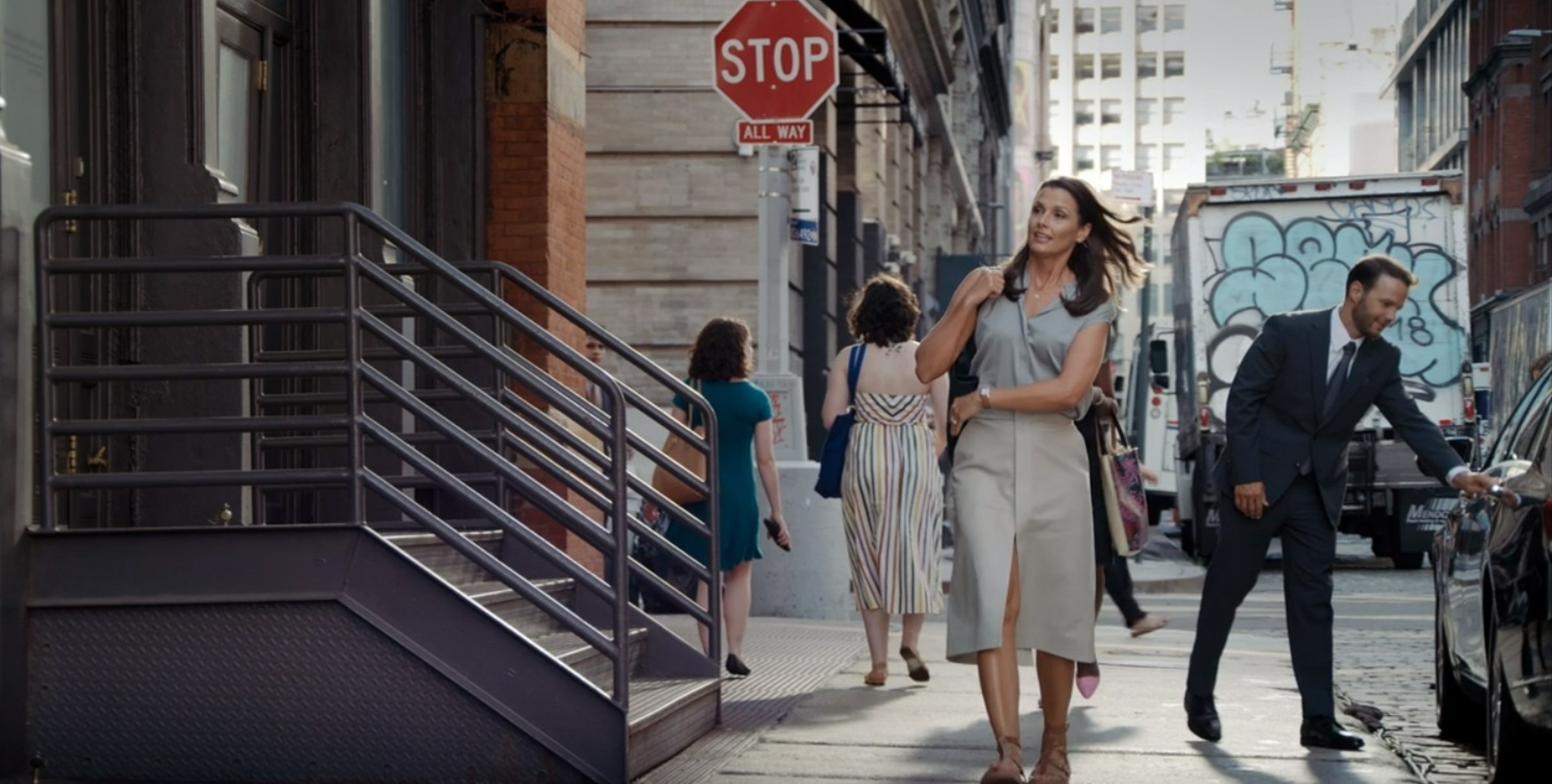 Additionally, she also wonders whether Mr. Big ever believed that he made the wrong decision by choosing Carrie over Natasha. Later, Carrie DMs Natasha on Instagram, only to get blocked by her. Fans will remember that Mr. Big cheated on Natasha with Carrie in season 3 of the original show. For a long time afterward, Carrie felt insecure and unsure about Mr. Big’s commitment to her. Clearly, Natasha’s name is causing old and ugly memories to resurface.

Thus, Carrie, accompanied by Charlotte and Miranda, decides to confront Natasha at her workplace. Then, Natasha’s assistant informs Carrie that Natasha is in Rome; however, we know Carrie had seen her just a few moments earlier on the street. Then, the three women awkwardly end up making make eye contact with Natasha, who is lingering near her office window.

Later, in a completely random occurrence, Carrie disastrously runs into Natasha in the washroom of a local cafe. Afterward, as Carrie nurses her coffee burns, Natasha accuses her of stalking her (and indeed, Carrie does know a lot about her, such as her address). Then, she sits down across from Carrie, offers her some ice, and admits that she hasn’t spoken to Mr. Big since the divorce. She also says that she doesn’t know why he left her the $1 million and that she has no plans of accepting the will; she suggests that the money be given to a charity instead.

Carrie confesses that although she did do a lot of snooping, she did so because she couldn’t stop thinking about how she may not have known Mr. Big after all. She also says that the money must be Mr. Big’s way of apologizing to Natasha, whom he hurt a lot in the past. After all, Mr. Big was a finance guy not known for his way with words. The two women seem to make peace and apologize to each other. Natasha, in particular, seems to have a stable life, with two sons and a great job. Ultimately, both Carrie and Natasha realize how much they have hurt each other over a man, and how deep their wounds run.

What Does Rose Reveal to Charlotte About Their Gender?

When Charlotte calls her daughter her “baby girl” during bedtime, Rose replies that they hate it when their mother calls them that. After a bit of confusion, it is made apparent that Rose has a problem with the word “girl” and not “baby.” They confess to their mother that they “don’t feel like a girl.” Rose, a skateboarder with a tomboyish demeanor and rebellious nature, has been averse to all things considered feminine right from the start.

Charlotte then speaks to Anthony about Rose’s revelation. However, the baker and event planner brushes off her concerns and asks her to let Rose explore their gender on their own. However, he, keeping in mind her intense nature and tendency to get overinvolved, also tells Charlotte not to take Rose’s words too seriously.

When Charlotte listens to Che’s coming-out story and finds out that their family was extremely supportive despite being confused about the fluidity of gender, she tears up thinking of Rose. Clearly, Charlotte wants to be a good mother to her child, which includes guiding them through their questions about identity. It seems as though Charlotte will finally put in the effort to understand the views and struggles of the LGBTQIA+ community.

Is Miranda An Alcoholic? Why Does Miranda Stay Back After Che’s Comedy Special Taping?

Charlotte and Miranda wait at a nearby Starbucks whilst Carrie goes to confront Natasha at her workplace. When Miranda goes to place the order, Charlotte rummages through her friend’s bag to look for a phone charger. However, she shockingly comes across three tiny bottles of vodka instead. She doesn’t mention the incident to Miranda but later informs Carrie.

However, Carrie, lost in her own sorrow, brushes aside Charlotte’s concerns regarding Miranda’s drinking habits, saying they all have been in need of a few drinks lately. It seems as though Miranda might be an alcoholic — she is very stressed about school and her marriage with Steve is more like a platonic roommate-situation rather than a romantic marriage.

Miranda, thus, might have turned to alcohol as a coping mechanism. She even decides to try out a psychoactive drug later, indicating that she is trying different approaches to her reality. At the afterparty, Miranda goes up to Che and gushes about their sense of humor and fascinating outlook on life. Touched by Che’s talk about desiring and pursuing change, Miranda exclaims that she too wishes to try out different things.

Che offers her a joint, but Miranda refuses as she has didn’t have a good experience smoking marijuana in the past. However, when Che asks if Miranda would be interested in shotgunning the weed, the older woman agrees. Thus, we see Miranda inhaling the smoke from Che’s mouth, with a decidedly glazed look in her eyes.

It seems as though Miranda is tired of her monotonous life and desires change. It could also be that Miranda wishes to fit in with a young and experimental crowd — considering that her classmates are all younger than her — by trying out their interests. On the other hand, the vodka bottles may belong to someone else, such as Brady. Perhaps Miranda is hiding the bottles from her son, who we know is quite reckless. However, we do see how Miranda, in the inaugural episode, goes to have a drink before her first-ever day of class to soothe her nerves. The upcoming episodes will reveal what Miranda’s relationship with the vodka is.

Gogi, also known as Gogie, is a golden-haired spaniel dog whose photo Carrie finds in Mr. Big’s wallet. The writing behind the worn-out photograph reads “Gogi ‘65.” Clearly, the dog must have had some significance in Mr. Big’s life, considering he kept the photo, neatly folded, in his wallet. Either the dog belonged to him during his younger days or it was the pet of an ex-lover.

However, considering that Miranda says Gogi’s name as soon as she sees the photo, it is likely that the dog indeed belonged to Mr. Big during his youth. Carrie clearly feels upset that she didn’t know about a dog that was so important to her husband and wonders whether their marriage was as happy and transparent as she imagined it to be. We will likely find out more about Gogi in the upcoming episodes.