Anxious People Ending, Explained: Who Is the Robber? 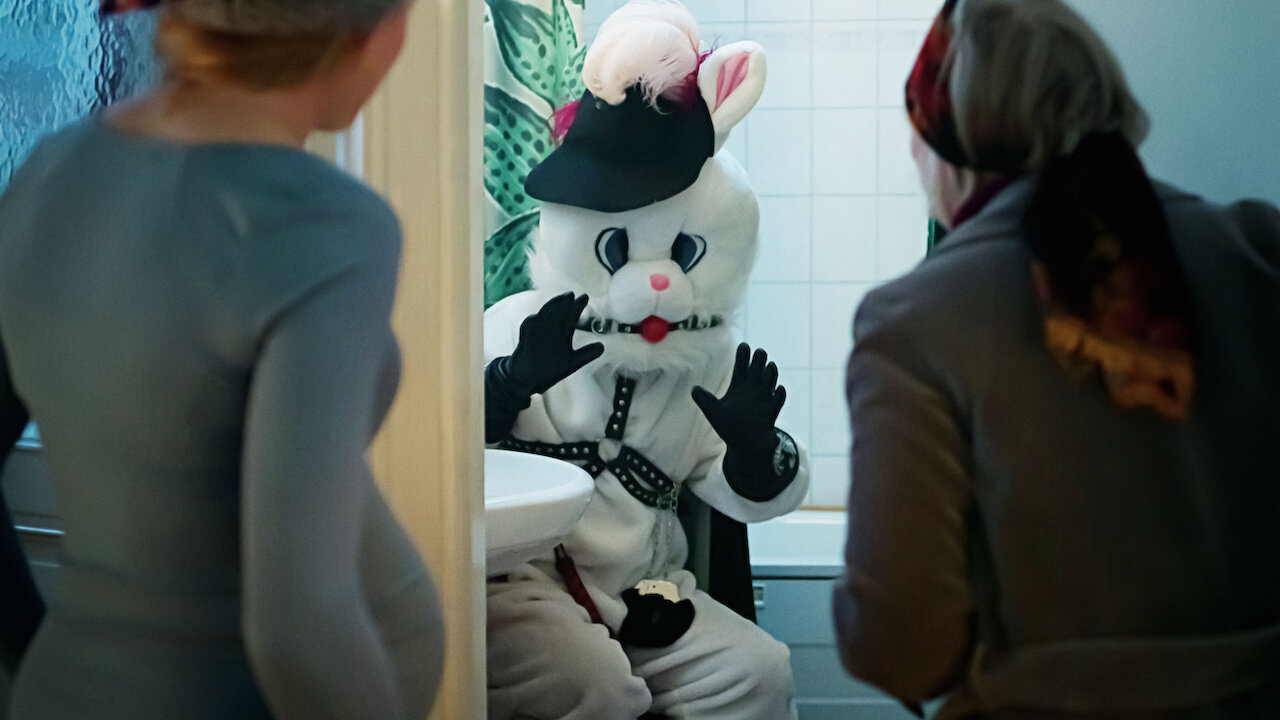 To err is human; to forgive, divine. Set against the backdrop of the turn of the year, Felix Herngren’s Swedish original police procedural comedy miniseries ‘Anxious People’ (originally ‘Folk med ångest’) packs quirk and laughter to lure the audience, and it leaves them with a gooey feel-good essence. A robbery of a cashless bank turns into a hostage situation. Nobody is harmed in the hold-up, but hereditary police officer Jack makes his life’s purpose to catch the robber.

Camilla Ahlgren penned the series based on the book of the same name by Fredrik Backman. Lottie Ejebrant delivers a commanding performance alongside Alfred Svensson, Dan Ekborg, and Leif Andrée. With genuine comedy, a familial structure, and a festive ambiance, the captivating miniseries marks a great end of the year for Netflix. However, the ending may confuse you, as there are too many knots in this witty and intricate story. If you are still busy solving the equations, let us get into the lab. SPOILERS AHEAD.

Jim Johansson and his son Jack are policemen in a small-town Swedish police squad. Jim roots for his daughter Jill to appear for the holidays this year, secretly sending her money under the nose of Jack. Jack does not believe that Jill will ever come back, as he blames her estrangement on her drug habits. Jack runs an errand to Milou’s barbershop for a haircut, but he rushes out when he hears from Milou that Jim still looks forward to Jill’s return. 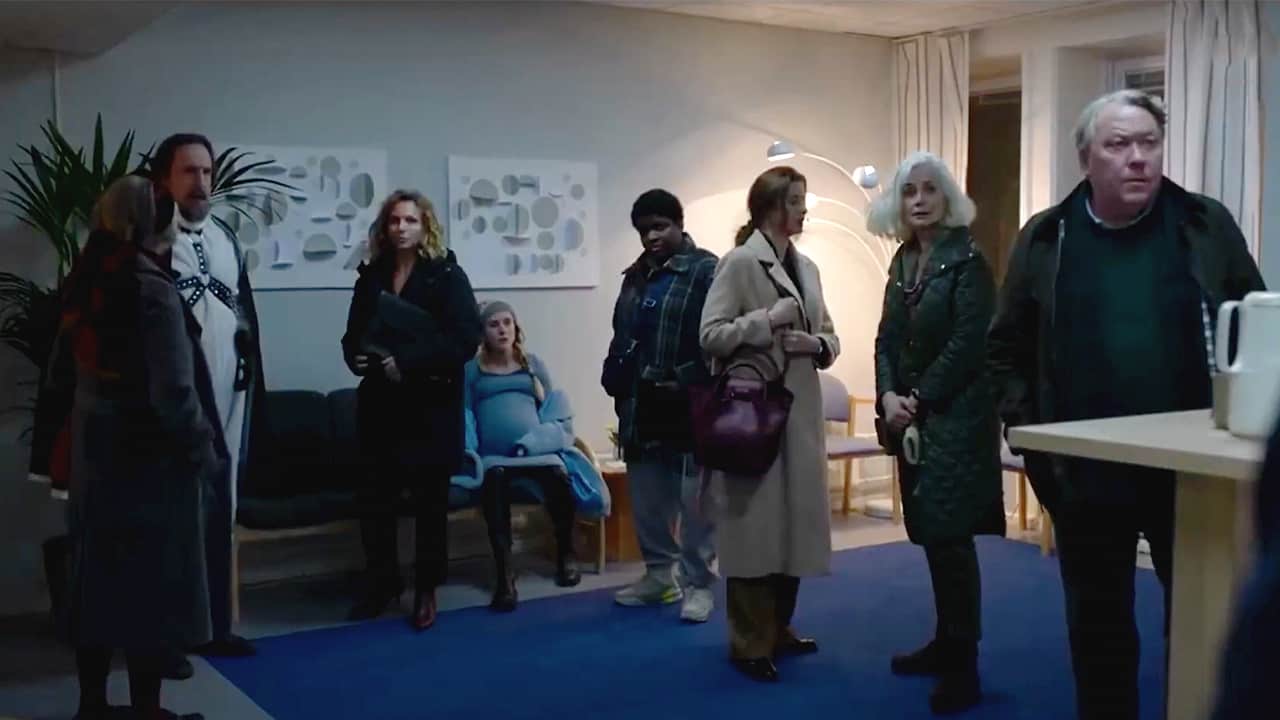 While Jim and Jack argue on the streets, a burglar breaks into a cashless bank. After the attempt misfires, she rushes into the apartment on the second floor, taking several hostages in a vacant apartment during a viewing session. Deducing a bomb in the apartment, Jack calls up the hostage rescue squad in Stockholm while Jim tries to negotiate with the robber. The robber shortly appears on the balcony and aims a note wrapped up in lime for Jack’s head.

He wants some pizzas and a firework to follow. After the firework, the robber releases the hostages and disappears. By the time the unit from Stockholm arrives, the situation is contained. The bomb turns out to be Christmas firecrackers in a box. Jill appears at the doorstep of the Johansson house, only to leave the following morning with Jim’s wallet and Jack’s tablet. Jim is keen on forgiving his daughter. Jim also deletes the surveillance footage of the crime scene. But Jack has to know the identity of the killer. Thus begins the ignorant hero’s journey to find the truth.

Anxious People Ending: Who Is The Robber? How Does She Escape The Crime Scene?

Late at night on the day of the burglary, Jim and Jack interrogate the hostages with little luck. Jack suggests that they should meet again after New Year’s Eve. Following the New Year, Jack questions Roger and Anna-Lena Bergvall, the elderly couple who deals in apartments. Roger and Anna-Lena try to keep a straight face, but Anna-Lena seems to know Lennart, the bunny costume guy.

As it turns out, Lennart causes minor catastrophic events to lower the prices of the apartments for the Bergvall family. Lennart also knows Zarah, the hostage who works at the same bank that was robbed. Lennart and Zarah seem to have had a private encounter during the hold-up, and they end up dating each other. When Julia and Ro appear at the bank for a loan, Zarah turns them down but agrees to meet them the following morning after a change of heart.

Meanwhile, an agitated Julia meets Zarah and tells her that Ro is missing. Julia thinks that Ro does not seek to have a family with her, but Ro is not sure of the responsibilities that come with it. Ro meets Roger at the pizzeria. When Julia’s water breaks at the police station, Jim picks up Roger and Ro from the pizzeria to escort them to the hospital. 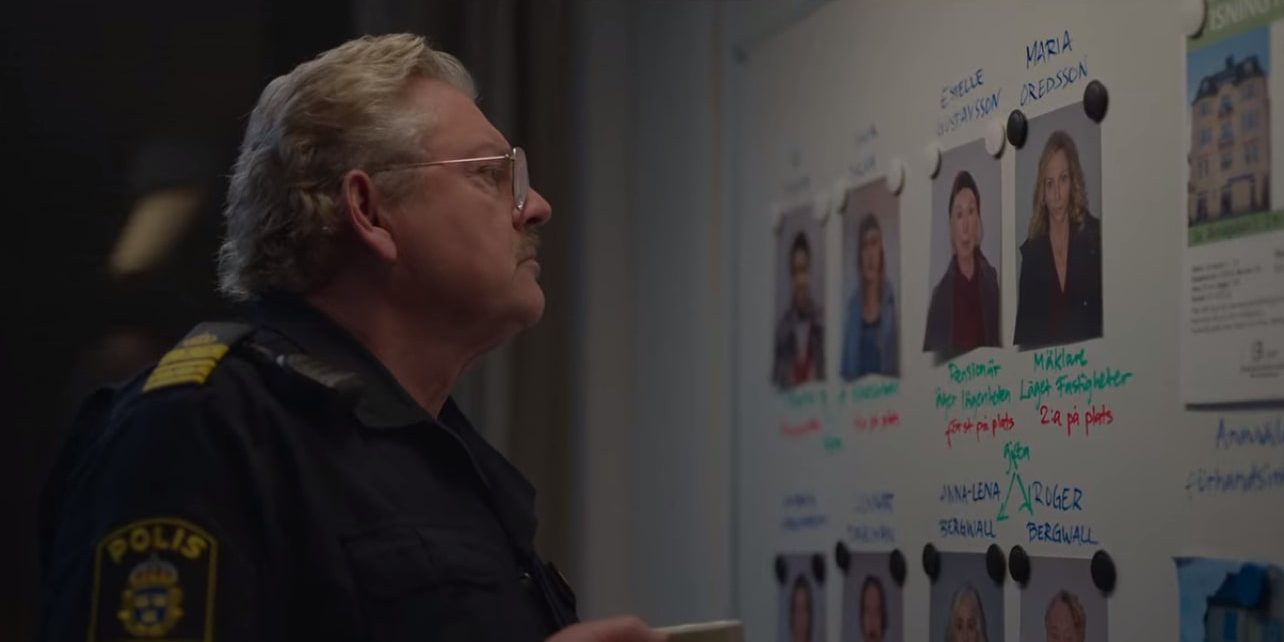 Running through the list of hostages once more with Julia, Jack finds that all the other hostages have missed the eighth person present in the scene apart from the robber. The person in question is Maria Oredsson, the estate agent. Jack calls in Estelle for questioning, as he has deduced that Estelle may be in league with the robber. Jack drops the bomb that Estelle was there viewing her own apartment, which was probably already apparent in hindsight.

In flashback, we see that Estelle knows there is food in the fridge, and she knows the perfect place to smoke in the flat. When she also brings out the wine, Anna-Lena and Julia figure out that the flat is Estelle’s. She has persistently canceled all the viewings for her apartment in the past six months. The police sent the gun from the crime scene at the forensics, and Estelle’s fingerprints happen to be all over it.

However, they get a call, and Jack catches up with Maria at a bus station. As it happens, Maria does not have a great deal of self-esteem, and she is keen on forgetting things. Therefore, she would not make a very good robber. Estelle, on the other hand, would make a good robber. She has the balance of character to pull off something like it.

She can lie while keeping a straight face, and on the way out of the police station, she tells Maria that it’s important they say the same version every time. However, while the series keeps us guessing, the finale reveals that the robber is Liv Holmberg. A desperate divorced mother of two, Liv would lose custody of her children if she did not have an apartment. Therefore, she tried to pull off the robbery, but the attempt, as she sobbingly agrees, later on, was idiotic.

Where Is Liv Now? How Did Liv Escape The Apartment During The Robbery?

After running an errand to Liv’s bunker, Jack returns to his father. Jim tells Jack that Liv is currently living in Estelle’s apartment with her kids. Jack goes to the apartment, and Liv opens the door. Liv seems on the verge of tears for fear of arrest. Well, after a moment of awkwardness, Jack assures her that he is not going to arrest her. However, the one question still bugging him is how Liv escaped the apartment. Because as you may remember, the robber had fled by the time the Stockholm police reached the crime scene. 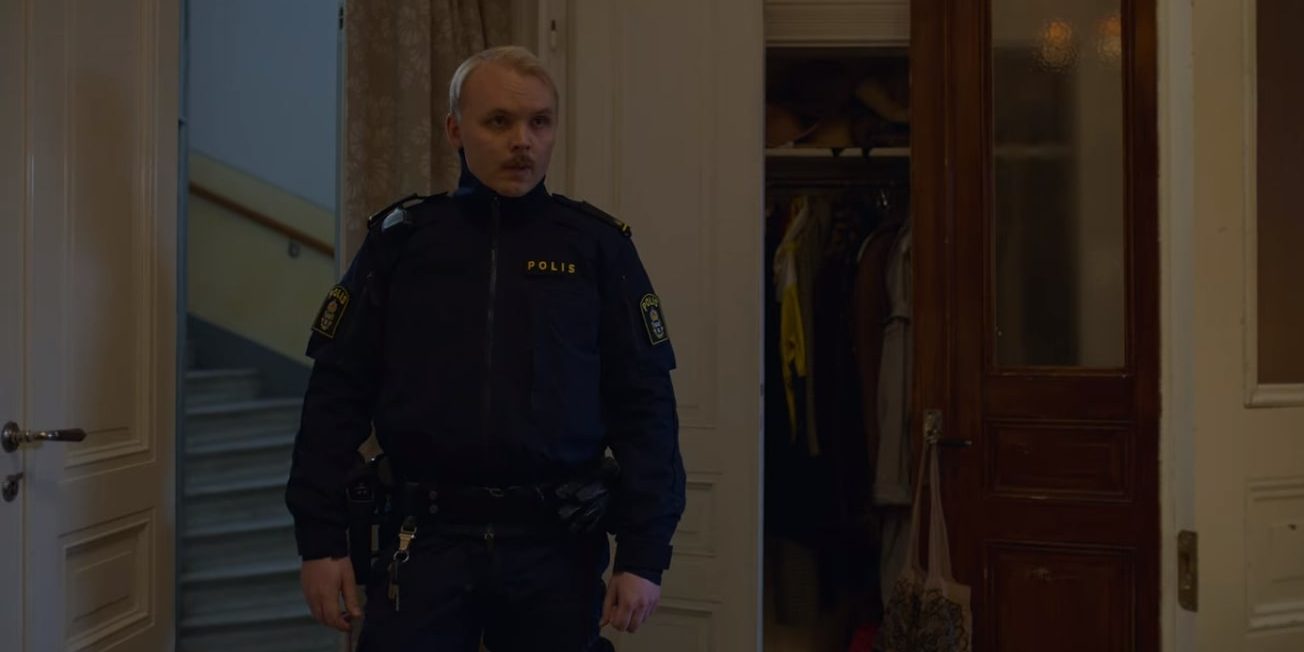 After Anna-Lena and Julia realize that the apartment is Estelle’s, she tells them a story about one of her unfulfilled romantic stints. While married to Knut, Estelle was having a fantasy affair with Klas-Goran. Estelle and her neighbor Klas-Goran exchanged books, and one day, Klas-Goran sent her the key to his apartment inside a text. Estelle was faithful to Knut in the end as she did not go to the other apartment. However, when Knut died, Klas-Goran passed away a couple of weeks later.

The moral of the story is that the key to the next door is still somewhere in the apartment. Estelle tells the story loud and clear, and when she sees Liv in the shattered condition, she possibly devises an escape plan for the accidental burglar. Taking the cue, Liv takes the key from the book and hides in the next-door apartment of late Klas-Goran. We see Ro and Julia moving into the apartment with Julia’s newborn baby in the finale.

Who Was The Person Who Jumped Off The Bridge? What Happens To Jill?

In the beginning, we see Jack, still adolescent, passing by the bridge on his bicycle. He sees a person about to jump off. The person gives Jack an envelope, and he promises not to jump off. But as Jack turns back, the person throws himself into the river. He is the person whose suicide haunts Zarah since she had not cleared his loan, leading to his death. The apartment, we come to know, belonged to this person, and that is why Zarah was visiting the place. 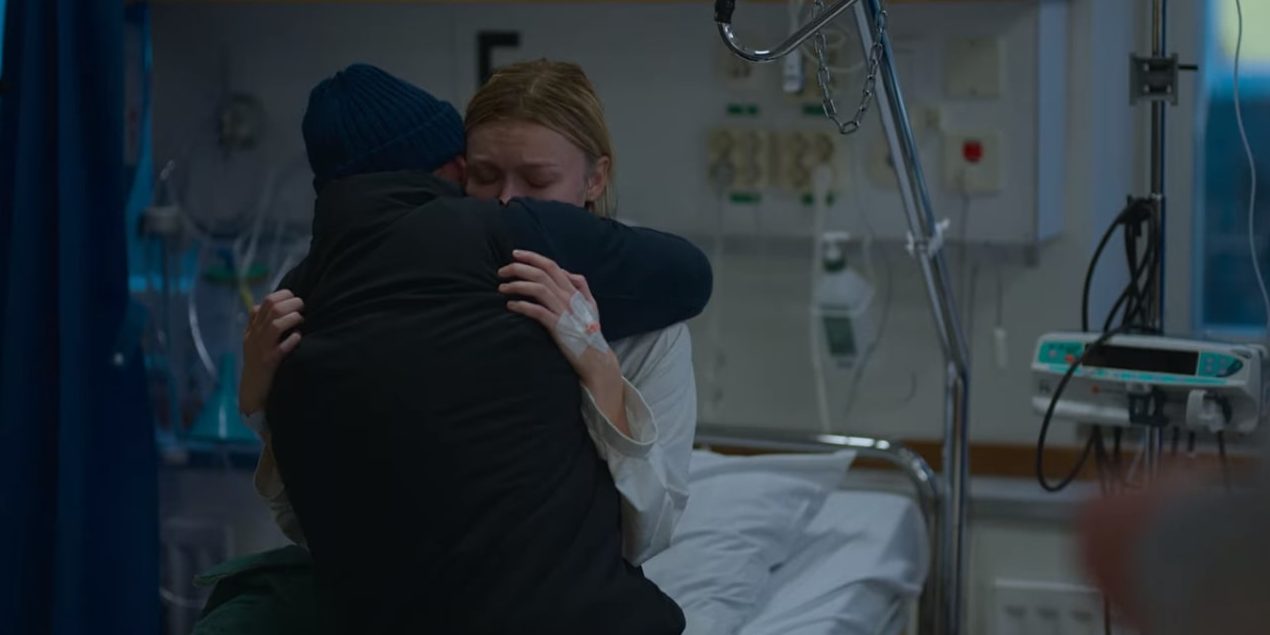 During the hold-up, she looked through the window to have a flashback of the incident. Later in the story, it turns out that the person is Estelle’s son, Gustav, who jumped off the bridge. Jack goes to Zarah’s place for questioning in the finale, discovering the letter he received from Gustav all those years ago. The letter was meant for Zarah, who has not opened the letter yet. But Estelle divulges to Jack in the barbershop that Gustav was battling last-stage cancer.

He did not want to die painfully and slowly and thus chose a faster descend into the river. In the finale, Zarah opens the letter to find that Gustav has divulged the reason for his suicide. He did not want her to feel guilty. The event haunts both Jack and Zarah, and both get their respective closures in the end. Zarah strikes up a relationship with Bunny, while Jack embraces Jill at the hospital. After the overdose episode, Jill possibly comes back home to live with the family.

Read More: Is Netflix’s Anxious People Based on a True Story?