Are Apolo and José From Who Likes My Follower Still Together?

Netflix’s ‘Who Likes My Follower?’ AKA ‘¿A Quién Le Gusta Mi Follower?’ is a one-of-a-kind Spanish reality show that is sure to keep you entertained. The dating series features three well-known internet celebrities who have been given the opportunity to help one of their followers in their love lives. The mentees are provided with several potential partners, whom they must eliminate one by one over the course of the season in order to determine their true match. As expected, the path of love is far from easy and brings quite a lot of drama to the viewers.

The show’s premiere iteration featured several fresh faces who were hopeful for a romantic match. While many did not get what they wanted, Apolo (AKA Joan Pau) and José Carlos Lora overcame several obstacles to build their relationship. Their journey was perhaps one of the most dramatic in the series. Naturally, fans are curious to know if the two are still together. If you, too, are eager to learn about the same, we are here and ready to explore.

Apolo and José Carlos’ Who Likes My Follower Journey

Apolo entered season 1 of ‘Who Likes My Follower?’ as a follower of Jonan Wiergo and was ready to find his love match. During the first round, Apolo decided to unlock José Carlos based on his faceless picture and phrase choice. Their mini-date was full of sexual tension, with them maintaining intense and long eye contact, much to the amusement of Jonan. Once José Carlos made his way into the top 7, he was one of the frontrunners in the race to win Apolo’s heart, though he was already in the bad books of fellow contestant Roma. 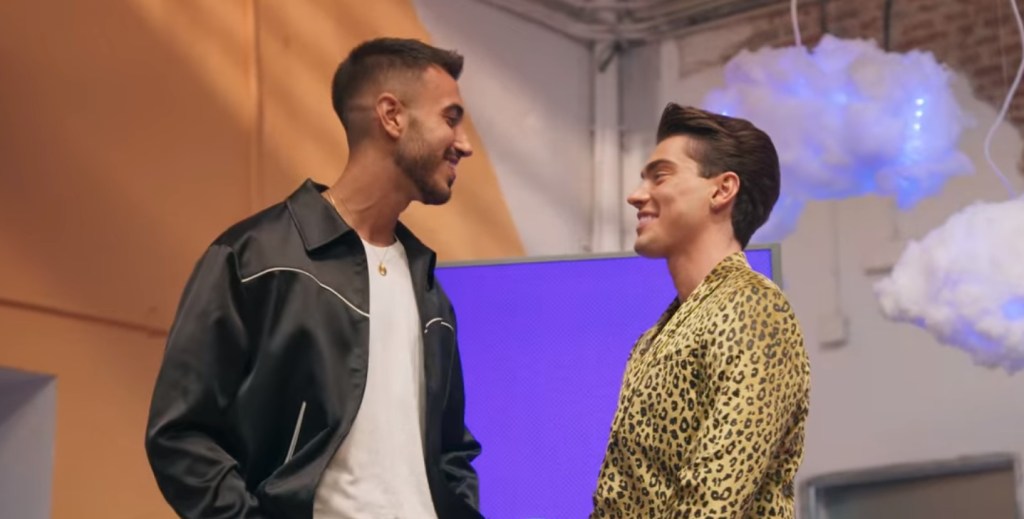 During Apolo’s first group date, he took his prospective partners to Lady Cirka’s abode, who ended up reading tarot cards for the future of Apolo and José Carlos’ romantic relationship. However, one of the cards was The Tower, which is supposedly the worse card out of all the possible options. Roma’s readings had gone quite well, and he was pretty happy about it. The ominous card put Apolo on edge, and José Carlos was frustrated with the follower’s belief in them.

In order to clear the air and allow Apolo to learn more about José Carlos, Jonan set up a date between the two. The meeting ended up going quite well, with the pair kissing multiple times and capturing several pictures of the same. For their next group date, Apolo took his daters to get a makeover with Spanish drag queen Pupi Poisson as the guest of honor. The participants were paired up and had to do each other’s makeup. Pupi declared that the one with the best makeup would get a kiss from Apolo. José Carlos, a makeup artist, did his best with Roma, though the latter did not achieve similarly good results.

Later, José Carlos revealed that he had thought the one to do the best makeup would end up getting the kiss and was frustrated about the same. The glammed-up competitors had to go to a ranch as per Jonan’s arrangements, but before they could enter the property, Jonan asked Apolo if he would like to share with everyone what happened during his date with José Carlos. Jonan’s pupil showed everyone the pictured that he took during the date, which led to an outburst from Roma, upsetting Apolo.

Apolo started getting closer to Adrián and Matt, who were dating each other and wanted Apolo to join them as a third partner in their polyamorous relationship. After the family-centered episode, which saw Apolo’s best friend Rosella make an appearance, Jonan’s mentee decided to super-like José Carlos, much to the latter’s delight. Along with the other cast members, Apolo, José Carlos, Adrián, and Matt traveled to Benidorm, where they met with Ricki, a prospective partner Apolo had blocked in the very first round.

The returning participant wanted another chance with Apolo. When the latter decided to let Ricki stay, José Carlos stormed off in anger. When the time came for Apolo to choose his partner(s) for the next date, he ended up choosing Adrián and Matt, which upset José Carlos even more. José Carlos decided he would not further interact with Apolo to see if Jonan’s mentee would miss the makeup artist.

While the drama surrounding Adrián and Matt’s relationship spilled out in the open, José Carlos refused to attend dates. He did not attend the final eliminations, despite repeated calls from Apolo. After gently rejecting Adrián and Matt during the time of his final decision, Apolo once again called José Carlos, who answered this time and explained the reasonings behind his actions. Apolo was thrilled that he had picked up the call and ran to meet José Carlos and crowned him his prince. But just how long did the fairytale romance last? Let’s dive right in and find the answers.

Are Apolo and José Carlos Still Together?

As of writing, the details of the relationship between Apolo and José Carlos seem to be under wraps. The two seem to be more focused on their professional lives and promoting their business/work through their social media accounts. However, they do seem to be at least on friendly terms, given that they follow each other on social media. There is a high chance that the two are still with each other, given how their bond strengthened in the show despite the numerous challenges, and we are sure their fans are rooting for the same.

Currently, Apolo works as a model and is affiliated with UNO Agency for the same. He has also released several original songs in the past, with his latest single, “Romeo,” having been released in July of 2022. José Carlos is an accomplished Hair and Makeup Artist and has a dedicated Instagram page for the same. Both of them are fond of traveling, with José Carlos recently visiting the island of Sardinia in Italy. We hope for the very best in their future and wish them success in their personal as well as professional lives.

Read More: Where Is Pixxbe From Who Likes My Follower Now?