Are Harry Johnson and Beaux Raymond From Too Hot to Handle Still Together?

As a dating reality series that follows a group of flirty singles as they prepare to go rowdy, only to realize that they’ve been tricked into facing the ultimate challenge of celibacy, Netflix’s ‘Too Hot to Handle‘ is unlike any other. The contestants do get to look forward to a massive grand prize, but the catch is that they have to forge emotional connections without physical intimacy to earn the same. Yet, despite the temptations, Harry Johnson and Beaux Raymond became the one couple of season 3 who managed to surpass all expectations in season 3. So now, let’s find out where they stand today, shall we?

Harry and Beaux’s Too Hot to Handle Journey

Almost as soon as Harry and Beaux met on the shores of what they believed to be paradise, the pleasant banter between them made it evident that they would get along perfectly well. From finding common ground in being British to joking about anything and everything, they did it all while getting to know one another. In fact, the two got so comfortable so quickly that they even shared a bed on the first night itself. However, it was strictly platonic at that point since Harry had his eyes set on Georgia, something that Beaux (and everyone else) was aware of. Soon, though, that changed for the better.

A few days into the retreat, Harry’s feelings for Georgia fizzled out, and he realized that despite not being his usual physical type, it was Beaux who was always on his mind. Their casual affection, silliness, her “chill” attitude, and the way he could just be himself around her without fear of judgment made him see that their connection was much more than a no-strings-attached friendship. Beaux felt the same way, but she hadn’t said anything beforehand in fear of getting hurt. However, their romance began immediately after Harry bashfully confessed his feelings for Beaux.

Knowing that they were both afraid of commitment because of their respective pasts, Harry and Beaux cleared the air on their first date itself, with the former implying that she was not his second choice in any way, shape, or form. The pair also opened up about their emotions, something neither of them had allegedly done with a prospective partner in years, leading to them getting the first greenlight of the season. From that point on, they grew closer, made a conscious effort to follow their hearts, and became inseparable; not even new housemates or lures could tear them apart.

Are Harry and Beaux Still Together?

Harry Johnson and Beaux Raymond’s relationship gradually evolved into such a positive bond that they started being deemed the parents of the villa, especially considering how they were always thoughtful and tried to put each other first. Moreover, their only rule break came when Harry chose to please himself in the shower after not being able to control himself any longer. Even then, he apologized to Beaux for his actions. 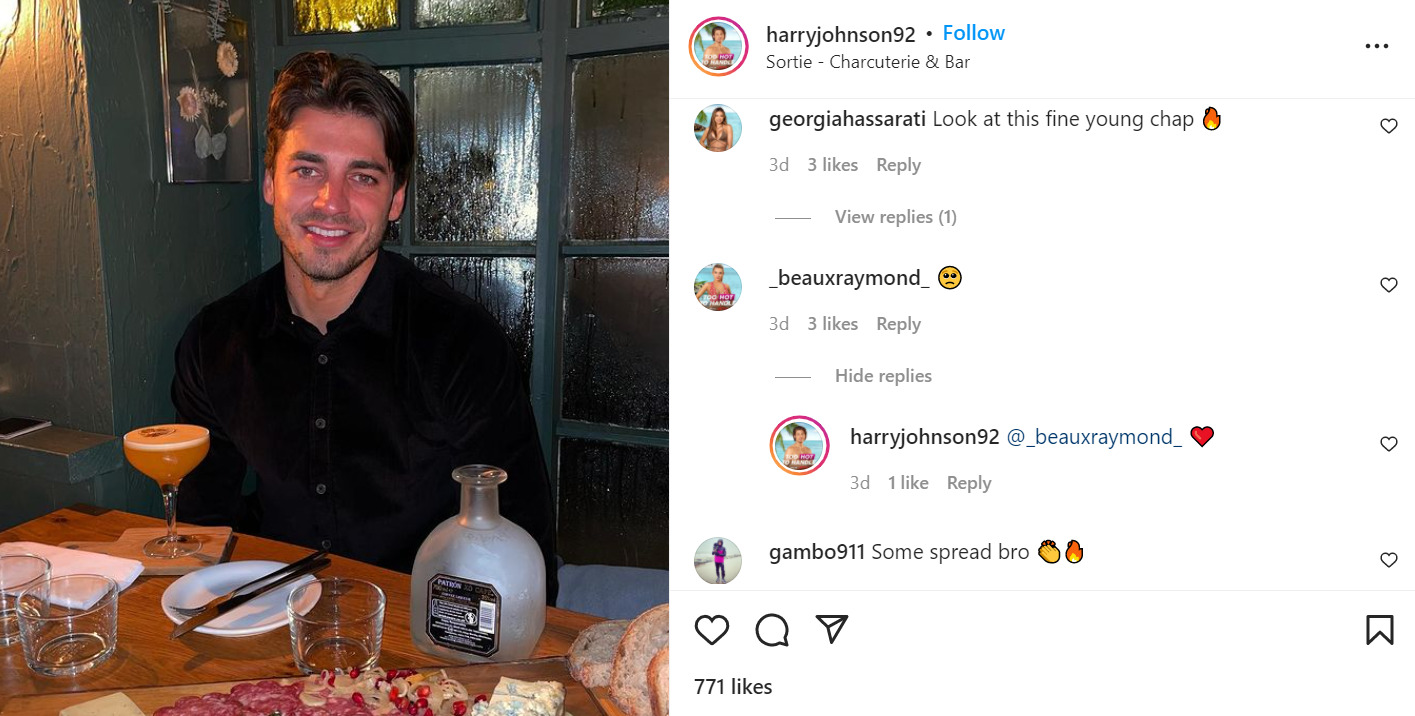 With him eventually asking her to be his girlfriend, the couple proved that personal growth, along with a deeper involvement, is possible — all you have to do is try to look past the superficial. That’s how Harry and Beaux managed to walk away not just hand-in-hand but also with an astounding $90,000, becoming the production’s first-ever winning couple. Therefore, we’re glad to report that it appears as if they could still be together, as signified by their social media platforms.

Neither Harry nor Beaux has explicitly mentioned their relationship status as of writing, but apart from the mutual follow, they do interact in the comment section as well (as seen in the picture Harry shared on his Instagram above). Thus, even if they’re not exclusive, the one thing we know for sure is that the lumberjack/part-time model from Middlesbrough and the Kent-based legal secretary continue to be, at the very least, great friends.

Read More: Are Nathan and Holly From Too Hot to Handle Still Together?