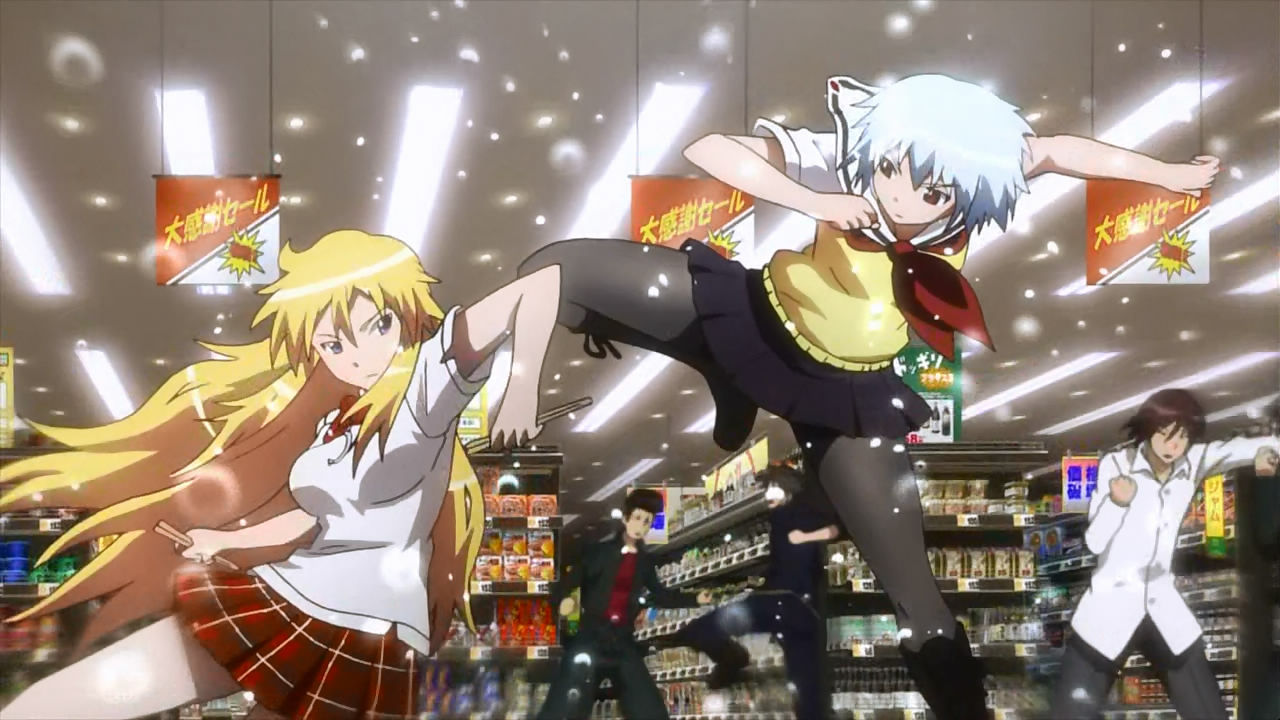 Who knew that one day we would actually get to see an action-packed anime that revolves around Bento meals. Most action anime shows are really fun to watch as they offer some great fight scenes of really high production values but the biggest problem with these is that they often come off as repetitive. ‘Ben-To’ stands out from all of these shows by using a parody approach towards the genre, and though its action scenes may not really be of high production value, they are extremely entertaining and are also backed up with a unique and bizarre plot. Its main appeal is all the dramatic fight scenes that have been executed really well by David Production Studio. For an anime of this kind, ‘Ben-To’ has the perfect runtime of 12 episodes where each episode is equally fun to watch.

‘Ben-to’ has a whole lot of fan-service and this goes to an extent where it might even come off as sexist to many viewers. But from an anime that aims to be a parody in itself, what more can be expected? The only problematic side of this is the clashing of the action of the anime with the fanservice which can get really annoying and seems unnecessary at times. The sound department has put in some serious efforts which can be clearly seen with the perfectly composed background scores and also all the voice acting that fits right in with the character mannerism. In the end, the reasons why you would avoid most other anime shows are the reasons why you’ll actually enjoy this one. And once you dive right into it, it becomes really addictive after some time.

Ben-To Season 2 Release Date: When will it premiere?

‘Ben-To’ Season 1 premiered on October 9, 2011 and came to an end on December 25, 2011. Since then there have been several rumors about its release every year; and even now, every once in a while an anime forum pops up somewhere where a fan claims that a new season has been confirmed. But these claims are obviously fake and after all these years, a new season now seems less of a possibility. Though the anime was really successful, it has not been picked up by the creators again and from what it looks like, this is just another one of those one season wonders that will be forgotten eventually. Even then, if we get any news regarding the anime’s renewal, we will update it here in this section with ‘Ben-To’ Season 1 release date.

The English Dub of ‘Ben-To’ Season 1 is available on Funimation and Amazon Prime.

You Satou is the main protagonist of the show who is 15-year-old school kid. One fine day, he walks to a supermarket nearby feeling hungry. He decides to get a Bento that is basically a prepacked meal, but as soon as he reaches out for a box on the shelf, he is knocked out cold by someone and crashes to the ground. He remains unconscious for a very long time and upon waking up, he finds that the shelves are now empty. He sadly walks out of the supermarket feeling all hungry and sore from the beating. Strangely, the same thing happens on the next day and the day after it and goes on every time he tries to do the same.

This is when he learns that in the present world, discounted Bento is considered to be a very sacred object and anyone who wants a piece of it must battle his/her way to the top. The most experienced of these fighters are known as wolves and others like Satou who are left beaten up to the ground are known as dogs. In the new world, it’s all about the survival of the fittest and the ones who are weak are left for dying from hunger. Satou’s only option now is to train under the silver-haired “Ice Queen”, Sen Yarizui, the only person who can help him become a wolf from the dog that he currently is.

Hana Oshiroi is a girl who gets excited very easily and joins the Half-Priced Food Lovers Club at the Karasama Private High School. She really loves writing yaoi novels where most of her characters are inspired by real-life Bento brawls. At school, she is bullied quite a lot which has led her to develop a strong inferiority complex. She always carries this heavy bag to school with her laptop inside it. She has a really small stature with brown hair and is always seen with glasses on.

For some reason, she gets really excited when something happens to You Satou during the Bento wars or when he goes out of his way to do something crazy and later gets nosebleeds. She is always seen writing about everything that is going on around her and everything she writes is written using self-assigned nicknames so that no one has a clue what she’s writing about. A lot of times, she also accidentally blurts out nicknames of people by accident.

You Satou, also written as Yoh Satou, is the main protagonist of the show. He is a first-year student who gets dragged into a battle for half-priced Bento and initially, gets beaten up pretty much every single day. He is known for his acts of perversion and really enjoys playing old retro video games including the ones made by Sega. He has an average build and has black hair with light brown eyes. Even during the Bento brawls, he is seen in his school uniform and usually has bandages on his face as an outcome of all the injuries from the fights he gets into.

Ayame Shaga is Satou’s cousin who is from Italy and like him, she is also an avid gamer. She often tries to control Satou and takes him for granted by making him do things for her. She is also a Bento player who goes by the name “Beauty by the Lake”. She is a light skinned teenage girl with long blond hair and is often seen with glasses on. For a schoolgirl, she is really curvy and is usually seen in her school uniform.

She’s got a very complex personality and often likes to flirt with You. She even gets really close to him sometimes, which makes him blush. She enjoys competing with Sen Yarizui and gets excited every time she gets the opportunity of battling her. She is really short tempered and gets upset very easily, especially when You prefers to hang out with Sen over her. She feels extremely protective for You and even shows signs of jealousy when she sees him with other girls.

Sen Yarizui is a second-year student at the high school who is the president of the Half-Priced Food Lovers Club. During her first Bento brawl, she had attempted to buy alcoholic beverage despite being underage. But the shop owner had stopped her after noticing her uniform and this event led to her being known as the “Ice Witch”. She has silver colored hair and deep red eyes. Usually, during most of her battles, she is seen in her school uniform along with black boots.

She absolutely loves half-priced Bentos and believes that battles that are being fought for no reason are just a waste of time and energy. During these battles, she always keeps an undying fighting spirit and does not give up even when she is injured. She can be really full of herself at times, but she still cares for her friends and does not judge anyone around her. She also acts as a mentor for You and always teaches him new methods of brawling. Apart from that, she also teaches him a lot about life with reference to her own personal experiences. Almost every time she manages to lay her hands on a Bento, she shares it with Hana and You. Unlike You, she is terrible at video games but is really good at playing board games. She also reads a lot of magazines and prefers reading them out loud when she is in her room. Every time she is pissed about something, she throws the source of her anger out of the window and then pretends to be fine by making sarcastic excuses.