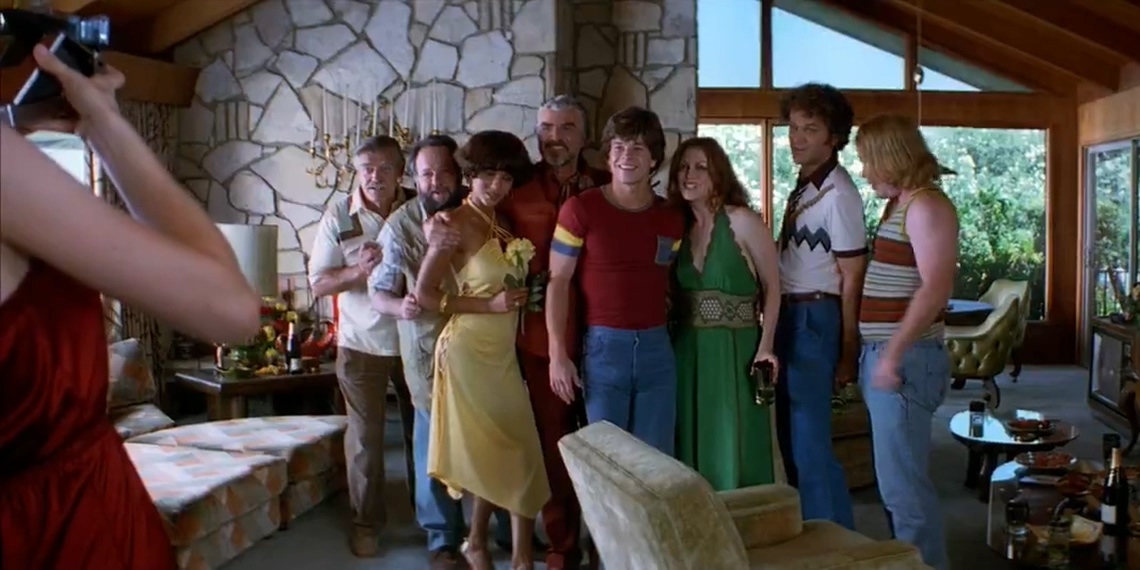 Sex comedy-drama ‘Boogie Nights’ is Paul Thomas Anderson’s sophomore film, and it is also one that made the world familiar with his cinematic brilliance. Although the film is pretty much drenched in raunch, the heart of the film lies in the familial realm. We meet diverse characters who come together to form a porn production unit – which turns into a quirky family by the end of the film. The ushering of postmodernism in cinema ensured that telling mere stories was no more adequate, that the filmmakers had to tell stories within stories to create a spiraling tour-de-force visual epic. The quintessentially postmodern film, therefore, conceals a metanarrative framework – Eddie Adams becomes Dirk Diggler becomes Brock Landers.

Moreover, the film manages to bring together a brilliant cast ensemble, with the highlights of the American sex symbol Burt Reynolds, a maternal Julianne Moore, and the shy porn star of Mark Wahlberg. Populated with characters, told in snippets, backed by an enhancing score, and topped with some unsettling firecrackers, the film brings out the essence of an era characterized by sex, drugs, and rock n’ roll, while depicting its inevitable demise. The finality of the film brings the story to a conclusive ending while catching a glimpse of Dirk’s fabled extraordinary penis. Anderson’s films give the impression that they go beyond the immediate surface meaning, and if you are trying to decode the final moments, let us assist you. SPOILERS AHEAD.

After a casting couch episode with his fellow bar-maid Rollergirl, Eddie returns home to an abusive mother and decides to move out in an instant. The next morning, he comes knocking at the door of Jack, who is elated to have him. Eddie makes friends with fellow porn actor Reed Rothchild, and comes up with the flashy screen name “Dirk Diggler.” The production unit includes Little Bill, whose promiscuous wife has little regard for him, Kurt the cameraperson, fellow actors Buck Swope and Becky Barnett, and helping hand Scotty, who has a thing for Eddie. As Dirk, Eddie rises to fame with the power of his tower and rides the waves to stardom.

He initiates an Oedipal relationship with Amber, who introduces him to coke on New Year’s Eve of 1980. In a few years, Eddie moves from coke to meth, and the stardom gets to his head. After a nasty brawl, Eddie falls out of favor of Jack. Following a stint at music, Eddie becomes a hustler, while suffering from erectile dysfunction. With his fellow meth-head friends Reed and Todd, Eddie plans to score some money by passing off baking soda as coke. When the handoff does not go according to plan, Eddie is compelled to return to Jack, whose business has seemingly taken a hit in the absence of Eddie. The film ends with a reunion, and the characters come together to shape an unlikely family.

Boogie Nights Ending: What Is the Symbolic Meaning of Dirk’s Penis?

Dirk Diggler apparently has a huge penis, cock, or wee-wee, whatever you name it. The film creates the myth of Dirk’s penis by showing the flabbergasted reactions of other characters as they take a closer look. The volume, the girth, and the sheer vitality of Dirk’s penis keep the otherwise pastiche narrative together. But the film keeps us on the hook by denying to show the real thing until the very last moment. In the penultimate scene, the film finally shows us a glimpse of Dirk’s fabled penis, and we see that the product matches the description quite well.

Although the monstrous penis is a prosthetic appendage created for the movie (and it’s one that Mark Wahlberg keeps as a souvenir), the almost cathartic final exposé is very much real. It’s all the more shocking when you have to wait for it. Now, phallic symbols are found everywhere in cinema, from a skyscraper in ‘The Simpsons,’ to a train entering a tunnel in ‘North by Northwest,’ to a glimpse of an actual penis in the early montage of Bergman’s ‘Persona.’ Coming out of the puritan ideals of the Hays Code, American cinema has truly come of age in its bold depictions of sexual imagery in the final decades of the twentieth century. It is perhaps no coincidence that the golden age of porn in America coincided with the abolition of the Hays Code in 1968. Therefore, the depiction of the penis also evokes a liberating effect in the mind of the seasoned viewer.

As it often happens with Anderson’s films, the viewers are left wondering whether the penis has a broader symbolic significance in the narrative of the film. The penis is perhaps a symbolic celebration of the cinematic medium itself. To present a trope such viscerally, which has mostly been presented before in the guise of lewd suggestions, is itself cathartic. It is more so when the director moves his gaze from the female body. Without the single talent, Eddie does not have much to offer to the world. The lack of his intelligence notwithstanding, Eddie has some ubiquitous gay charm in his character in the early moments of the film. But as the story moves forward, Eddie turns to hard drugs and loses much of his early innocence. He earns a lot of money and fame, which blurs his vision.

As Reed divulges in the course of a mock interview, the erection does not last a lifetime. Buck understands that, and he takes his exit from the industry in the search of a stable life with Jessie. In the end, he succeeds in opening his very own stereo speaker business, with the help of some divine grace. On the other hand, Eddie hangs out with the wrong people and his drug intake spirals out of control. He cannot get his fabled penis erect and is forced to live on the streets jacking off for a few bucks. He is also left without a stable family. His final return to the mirror may suggest a symbolic return to the mirror stage since Eddie does not have a mother figure to look up to. But maybe that would be reading too much into it.

What Are the Reasons Behind Dirk’s Fall from Grace?

At the end of the rising cadence, Dirk Diggler finds himself alone living a feral life. After the fight with Jack Horner, Dirk falls out of his favor. If we look at Dirk’s life in retrospect, it becomes evident that the heavy usage of drugs brings Dirk’s career to an untimely pause. As the 1980s descend upon the characters, Dirk’s maternal lover Amber introduces him to cocaine. Amber, who treats Eddie as his baby, clearly has some unresolved issues of her own. Separated from her own child Andrew, Amber depends largely on coke to cope with her loss.

No sane mother would introduce their children to drugs, but the character of Amber oscillates between the roles of mother and lover. In an early scene, we see Dirk doing pot with his girlfriend Sheryl Lynn, so he is certainly not a newcomer to drugs. But his associates and friends have a role to play in his transformation into the trashcan addict that we meet in the later stage of the film. After coke, he gets attracted to crystal meth, and his life takes a wrong turn. Apart from his meth-addled rage, Dirk Diggler seemingly falls due to his humongous ego (a perfect match for his asset) and pride. The latent message is, however, quite clear – “kids, don’t do drugs!”

What Happens to Reed?

After the episode at Rahad Jackson’s house, Reed and Eddie make a close escape while Todd dies on the scene. Rahad shoots at Eddie’s car, and while he manages to break most of the glass windows, Eddie drives away, leaving his best buddy Reed behind in the process. We see Reed running from the scene with his life in his hands. What happens to him, one may wonder. But as the last moments reveal, Reed begins a new life working as a magician at a strip club. Reed always had a way with magic, and the final minutes give his character a justified conclusion.