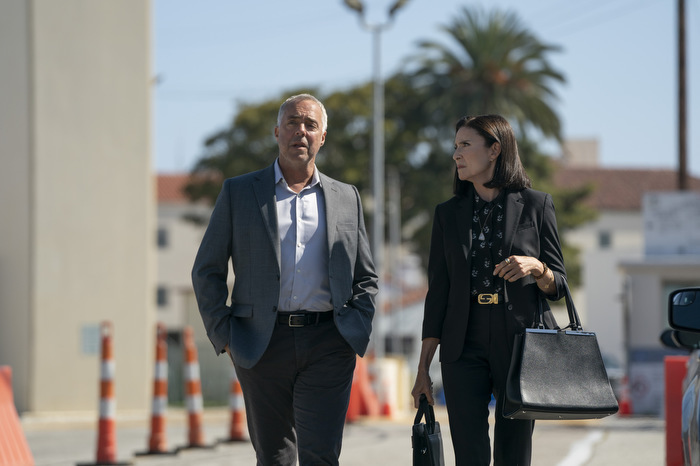 In one of the last scenes of ‘Bosch,’ after the titular character (Titus Welliver) hands over his badge to the Chief of Police in Los Angeles, the latter asks him what he is if he isn’t a detective, prompting Bosch to reply that he is going to find that out. Bosch proceeds to apply for a private investigator permit.

When the spin-off series ‘Bosch: Legacy’ opens, some time has passed. Bosch has gotten his P.I. permit and now works on cases with his tech guy Maurice “Mo” Bassi (Stephen A. Chang). Maddie (Madison Lintz) has gone through the academy and is now a rookie cop in East Hollywood. Meanwhile, Carl Rogers, the man behind the attacks on Maddie and Chandler (Mimi Rogers), is freed, prompting Chandler to launch a civil lawsuit against him. Here is everything you need to know about the ending of ‘Bosch: Legacy’ episode 4. SPOILERS AHEAD.

In the pilot episode, titled ‘The Wrong Side of Goodbye,’ Bosch seems to thrive as a private investigator. He was deeply unhappy as a police officer for a long time. But being his own boss has evidently done the trick. He is contacted by billionaire Whitney Vance (William Devane) through Trident Security, a high-end security firm, with an offer of $10,000 just for a meeting. Curious about what a man like Vance can possibly want from him, Bosch agrees to meet. He subsequently learns that Vance wants him to find out what happened to his pregnant girlfriend, whom he deserted about seven decades ago.

In the Carl Rogers case, Willy Datz, a key witness for the prosecution, turns rogue, and the jury ends up in a deadlock. This leads to Rogers’ release. Frustrated, Chandler convinces Bella Winslow, the daughter of the slain judge Donna Sobel, to help her launch a wrongful death case against Rogers in episode 2, titled ‘Pumped.’ Chandler also enlists Bosch’s help for the case. She simultaneously deals with a murder case where the alleged perpetrator suffers from catatonic schizophrenia. Demonstrating that the DNA samples that the authorities collected were contaminated, she gets the case to be dismissed against her client.

In episode 3, titled ‘Message in a Bottle,’ Bosch and Chandler visit Datz in prison. Chandler forces Datz to reveal that the Russian mafia threatened him. Meanwhile, Maddie works with Officer Reina Vasquez. While helping a rape victim, she starts reliving her own trauma from the attacks. In episode 4, ‘Horseshoes and Hand Grenades,’ Crate (Gregory Scott Cummins) and Barrel (Troy Evans) from the original series show up to help Bosch track Rogers.

Bosch Legacy Episode 4 Ending: What Does Bosch Find Out inside the Facility?

It becomes quickly apparent in the first four episodes that Rogers’ problems don’t end with just Chandler and Bosch. He took a $10 million loan from the Russian mafia, and they have come seeking repayment with steep interests. Brothers Alex and Lev Ivanovich, princelings of the Bratva, tell Rogers that he will have to pay them $40 million. Rogers realizes that he can’t convince them to be rational, so he agrees to pay the amount. But getting that much cash in such a short amount of time is nearly impossible even for someone like Rogers. It is then revealed he has a plan to get the required money. His associates have their doubts about this. But Rogers knows that he has no other choice.

Bosch enlists the help of Crate and Barrel to keep an eye on Rogers and his three associates: Simon Wakefield, Russ Pensak, and Leo Aslan. Wakefield handles Rogers’ finances and accompanies him to his meeting with the Ivanovich brothers. As Crate and Barrel reveal, Pensak is a pipeline operator in charge of monitoring the flow of gas through the pipeline network of a company called Drysdale. On the other hand, Aslan runs Aslan Inc., which owns several freight trucks and gasoline tankers. Aslan also owns a PVC manufacturing plant. Although it was shut down five years earlier, it is guarded by a security team. Tankers have been seen going and out of the facility.

Bosch decides to break into the plant to find out what is happening there. He discovers Drysdale pipes and realizes that Rogers and his associates are stealing gas. Right after he informs Chandler about this, Bosch is found by a security guard. There is little chance that he will be killed or handed over to the police. Because, after all, he is the protagonist. But more importantly, Bosch has gotten out of trickier situations before.

Who Are the Woman and Child in Dominick’s photos?

As Bosch embarks on his search for Vibiana, the woman that Vance deserted, he discovers she committed suicide. But before that, she gave birth to a boy, whom she named  Dominick Santanello. Although Dominick was later adopted, his adoptive parents decided to keep the name his biological mother gave him. Dominick grew up with his adoptive sister Olivia and later enlisted in the Vietnam War. He was a medic and was eventually killed in action.

Bosch finds a film roll among Dominick’s things and develops the photos. Some of them are of a woman and a child. The implication here is the child is Dominick’s. And it just might turn out that way. But it seems quite unlikely for a show like ‘Bosch: Legacy’ to tie things up that neatly. Billions are on the line here, and if that child is indeed Dominick’s, their lives and those of their family members are in serious danger.