Bunny Yan: Where is Mind Your Manners Participant Now?

Netflix’s ‘Mind Your Manners‘ is a reality series that follows international etiquette teacher Sara Jane Ho and many of her clients. Each episode revolves around one of her students who hope to find the best version of themselves and let go of the obstacles holding them back. Under Sara’s tutelage, the participants learn how to improve their lifestyle and dressing sense. They further discover their hidden depths and are motivated to achieve their dreams.

The show’s first season featured many captivating stories. One of the fascinating tales was that of Bunny Yan, who wanted to embrace her Chinese heritage but was unsure how to accept that side of her genuinely. Her disconnect from her roots stemmed from her past experiences and upbringing. Through Sara’s help, Bunny found a new appreciation for her culture and embraced her whole identity. Now, if you are wondering what she is up to, we have your back!

After living in Shanghai, China, for the first few years of her life, Bunny Yan moved to New Jersey and grew up in the US. This led to a disconnect with her heritage as she did not understand several aspects of her culture, especially the ones people assumed she would know due to her Chinese roots. Bunny explained that when she went to China, she would commit some faux pas as she was unaware of the customs and traditions.

When Bunny first met Sara, the etiquette teacher was interested in seeing her latest pupil’s fashion sense. However, the former explained that she wore whatever she felt on a particular day, and her wardrobe contained onesies and tutus. Trying to keep an open mind, Sara asked Bunny to wear her onesie and tutu, which the latter promptly did. Nevertheless, the etiquette expert could not understand why her pupil would wear such clothes in public.

Sara asked Bunny to explain her reasons, but the young woman avoided the question. This prompted her to voice her thoughts that the latter’s clothing reflected how she felt she did not fit in growing up. In retaliation, she decided not to care about what the world expected and to wear whatever she wanted. To make Bunny more comfortable and introduce her to Chinese influence, Sara invited her to a game of Mahjong. The trainer also welcomed two of her Chinese pupils to have four players and facilitate much-needed conversation.

As the game continued, Bunny spoke about how she disliked Mahjong since some people would gamble over it. Apparently, her father was a gambling addict and alcoholic. According to her, these traits, combined with his abusive behavior, led her to make her mother leave him when Bunny was 15. One of Sara’s students shared how her son had done the same for her when he was 18. The shared experiences helped Bunny to confront her past pain and anger and start the process of healing. 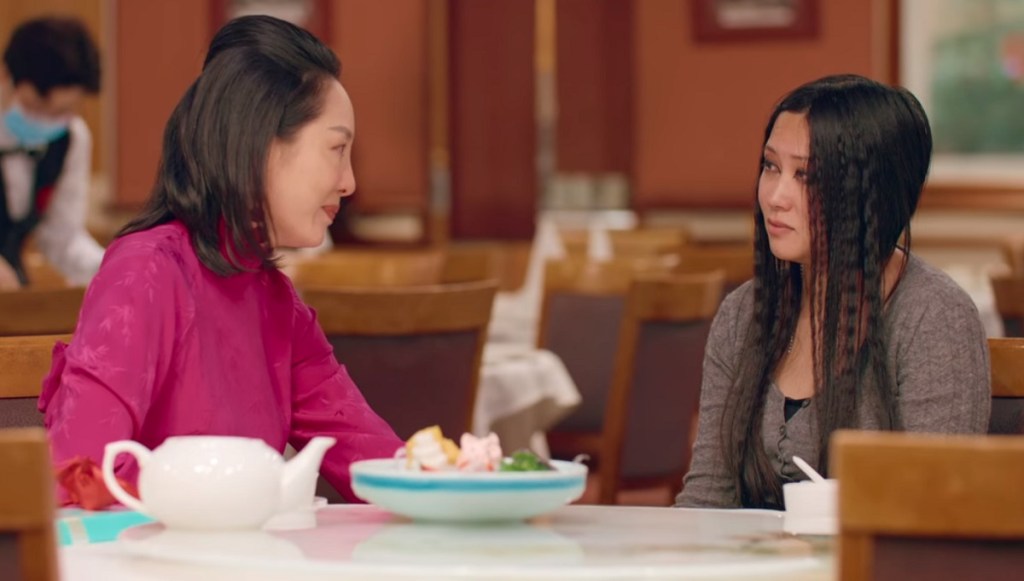 Continuing Bunny’s Chinese education, Sara asked Bunny to wear a qipao. The dress style combines western styles with Chinese culture to create an elegant piece of clothing. Sara felt qipao’s origins were similar to Bunny’s since two cultures influence both. During this session, the young woman shared that she enjoyed conversations with her coach as she had not talked in Chinese for so long. She divulged that she did not have many Chinese friends and rarely got the chance to converse in her mother tongue.

Shortly afterward, Sara visited Bunny’s home with a feng shui master, who provided tips for balancing the energy within the house. Lastly, the etiquette teacher introduced her to a Chinese traditional medicine practitioner to connect her to her Chinese roots. The doctor stated that Bunny had too much energy within her and must use acupuncture and herbal medicines to bring calmness into her life.

Despite this being Bunny’s first time with the acupuncture needles, she soldiered on and felt rejuvenated after the session. To celebrate the end of her journey, her teacher took her to have a delicious Chinese meal. While there, Bunny confessed that what she most enjoyed about the experience was her conversations with Sara, which touched the etiquette teacher.

Where is Bunny Yan Now?

As of writing, Bunny Yan is taking impressive strides within the fashion industry. She aims to promote fashion and its history while keeping in the ecological impact of her work. Presently, she serves as a fashion storyteller and Founder of Leftside Of Fashion. The organization creates an Instagram show that combines fashion, comedy, and sustainability. The series helped Bunny gain over ten thousand Instagram followers in just a year.

Furthermore, the content creator serves as a Startup Mentor for Various Startup Incubators and is the Founder/CEO of the Squirrelz. In March 2004, Bunny established Wasavy’s Printshop in Shanghai, China, and the venture is still in operation. Besides, she creates comedy content and shares it with her thousand of followers through social media. Over the years, Bunny has collaborated with brands like H&M and had the honor of being invited to the White House during President Barack Obama’s term and speaking in front of the UN. Her work has been featured in reputed publications like Forbes and TimeOut.