‘Cinderella’ is a musical film directed by Kay Cannon (‘Pitch Perfect‘) and a modern reimagining of the classic fairy tale of the same name written by Charles Perrault. It tells the story of Cinderella/Ella, a poor girl with dreams of becoming a businesswoman who falls in love with Prince Robert. The new iteration introduces various fresh and progressive elements to the age-old romantic story and features some foot-tapping numbers. The progressive ideas take the narrative in a new direction, and if you are curious to find how this magical tale of love and self-discovery ends, here’s everything you need to know! SPOILERS AHEAD!

In ‘Cinderella,’ Ella (Camila Cabello) lives with her stepmother, Vivian, and two stepsisters. Living in a patriarchal society, Ella dreams of opening her own dress shop and becoming a businesswoman. She works tirelessly around the house doing chores and works on her dress designs in the basement. Prince Robert (Nicholas Galitzine), the son of King Rowan (Pierce Brosnan), does not wish to marry simply for power and wants to marry someone who he loves. This irks King Rowan, and the two regularly quarrel about the matter.

Robert meets Ella by a chance encounter and is smitten by her outspokenness. King Rowan allows Robert to hold a ball to find his future Queen. Ella wants to showcase her work at the ball. Her stepmother, who isn’t accepting of Ella’s desires, forbids her from attending the ball. With the help of her Fairy Godmother, Ella makes it to the ball.

Robert and Ella bond over their shared ideas about conformity and fall in love. Tatiana, a queen from a distant land, offers Ella a chance to become her dressmaker. Cinderella must choose between Robert and her dream. She chooses her dreams which breaks Robert’s heart. How the two find a way to overcome their struggles and live life on their own terms makes up for the rest of the plot.

Cinderella Ending: Do Ella and Robert End Up Together? Do They Get Married?

Towards the end of the movie, Ella must make it to the market on time and meet with Queen Tatiana if she hopes to have any chance of living her dream. However, after Vivian finds out what Ella is up to, she betroths Ella to Thomas and takes her away. With the help of her mouse friends, Ella escapes and runs into Robert, who has been looking for her after his father allows him to live life on his own terms. Robert helps Ella get to the market, and Queen Tatiana offers Ella the job of her personal dressmaker. Ella and Robert decide to travel the world. They express their desire to King Rowan, who happily agrees and crowns Robert’s sister, Gwen, as his successor.

Anyone who is remotely aware of the popular version of the Cinderella fairytale knows that the story culminates in a happy ending. In this version, Ella does get her happy ending, but not just for the sake of it. She achieves her dream and gets her happy ending on her own terms. During Gwen’s coronation, Ella exclaims that she does not want to put a label on Robert and her relationship just yet. Therefore, while Ella and Robert do not get married, they are deeply in love with each other and remain together.

Ella chooses her dreams over love and thus breaks the stereotype of romantic fairytales. On the other hand, Robert gives up the crown to be with the woman he truly loves. Gwen is crowned as what we imagine is the first ruling Queen of the kingdom. Therefore, each aspect of the ending highlights the movie’s progressive themes.

The ending reminds us that patriarchy need not be smashed but can also be changed with positivity. Rowan and Robert both show traits of toxic masculinity. Still, the movie does not harp on these aspects. Instead, it brings about a gradual change in their ideology, and that is arguably the highlight of all the progressive elements in this updated rendition of a classic fairy tale.

Does Ella Reconcile With Her Stepmother?

Throughout the movie, we see that Ella’s stepmother, Vivian, is particularly harsh on her. She tries to get Ella married forcefully and does not allow her to pursue her dream. As a result, Ella is forced to run away. However, during the final song of the movie, Ella reconciles with her stepmother. On the surface, this might appear conceited to some, especially due to all the progressive and informed storytelling choices the ending makes (as mentioned above). 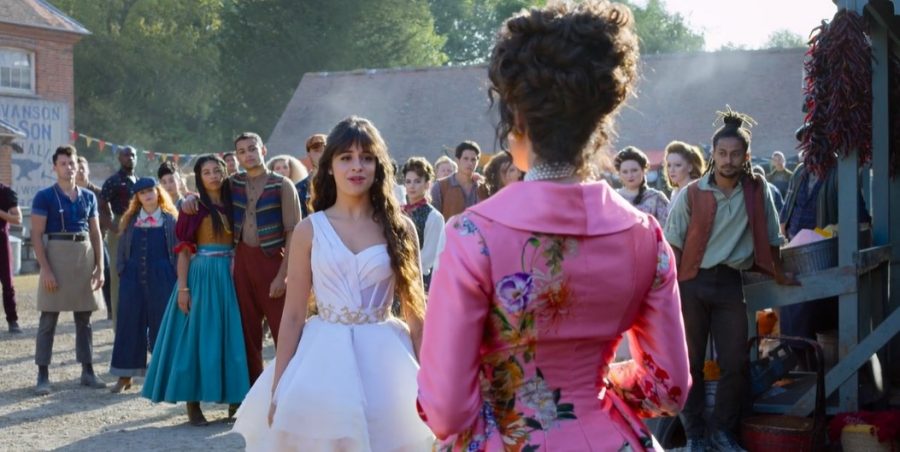 However, it is important to note that Vivian isn’t particularly cruel or antagonistic towards Ella. As Vivian explains in one scene, she was once a skilled piano player who tried to pursue her dream, and her first husband left her because of it. Therefore, it is easy to see how Vivian’s feelings towards Ella might come from a place of concern. She recognizes Ella is talented but does not wish for her stepdaughter to face the same fate as she did. Her conversation with Ella portrays her as a misunderstood mother who knows the harsh reality of life.

Like any parent, Vivian wants the best for her daughter, and according to her, that means marrying a rich suitor. The patriarchal society that Ella lives in proves to be a hurdle that Ella must overcome to achieve her dream, but her mother proves to be the biggest obstacle. Ultimately, Ella reconciling with Vivian underlines that Ella does not rebel against the society she lives in but is willing to help mend its flaws.

Read More: Where Was Cinderella Filmed?