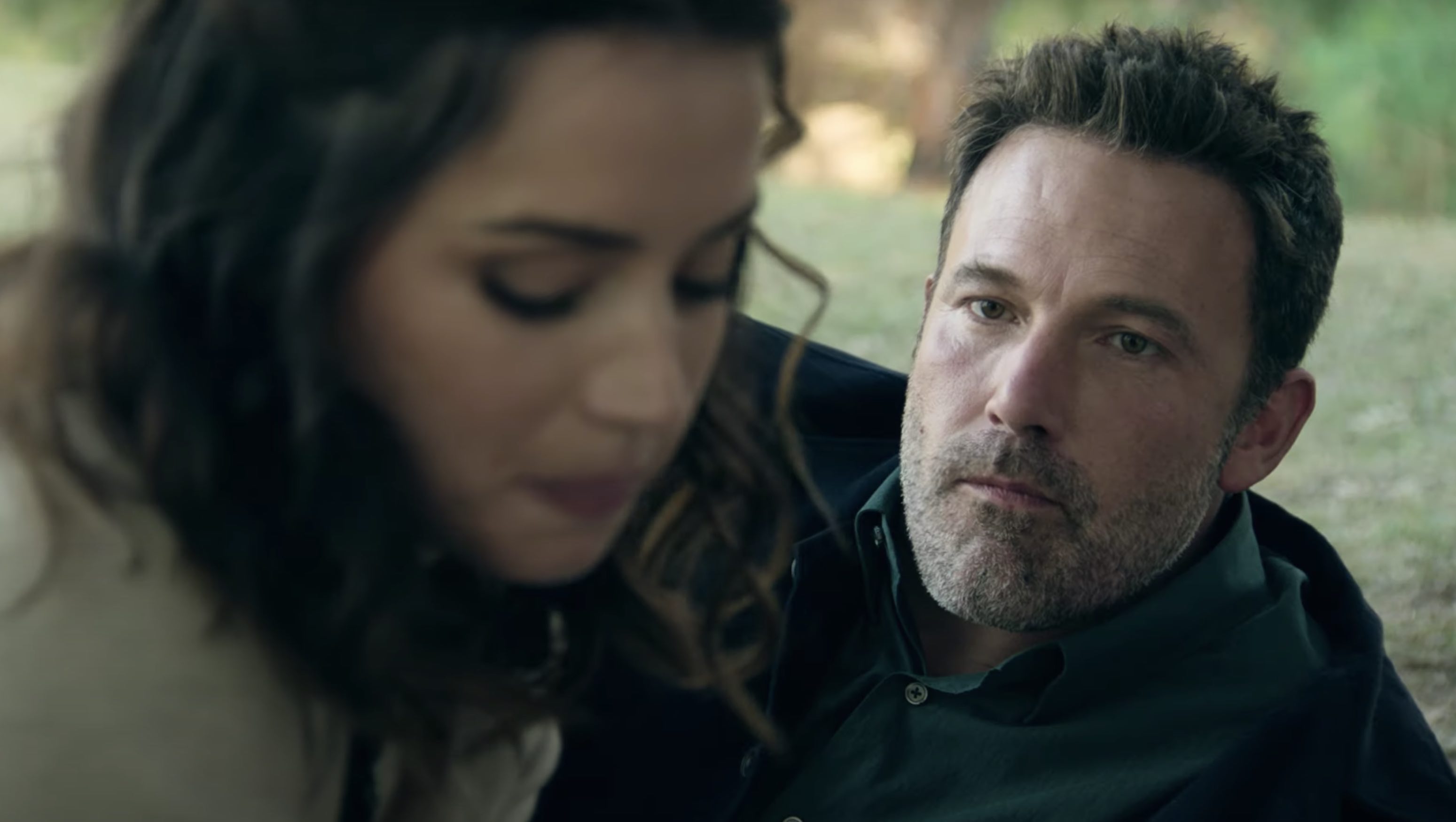 ‘Deep Water’ takes an intensely dark, psychological look at a married couple’s imploding relationship and the unconventional methods they both resort to for release. Vic (Ben Affleck), a brooding and wealthy tech inventor, tolerates his wife Melinda’s (Ana de Armas) frequent affairs in an attempt to hold their family together. However, his passivity seemingly takes a sinister turn when one of Melinda’s “friends” is found dead, dividing the couple’s friends as to whether Vic could have actually killed his wife’s lover.

The film opens with Vic returning from a cycle ride to find Melinda staring intensely at him before getting up and retreating into their home. The palpable tension between the two sets the tone for the remainder of the film, which then introduces details of their life. Their vivacious six-year-old, Trixie, is the apple of Vic’s eye while the mother seems faintly detached from the daughter. The couple, wealthy from Vic’s invention of a microchip used in military drones, has a healthy social life. However, the parties they attend usually have Melinda inviting another (generally younger) “friend” with whom she disappears for long periods, making it quite obvious what she’s up to.

At one such party, Vic, frustrated and provoked into speaking, tells Melinda’s current friend Joel that he (Vic) killed her previous acquaintance Martin McRae. Joel is spooked and eventually leaves town, but not before spreading Vic’s claim. Soon, their friends’ circle is abuzz though most of them are sure of the husband’s innocence. However, when another one of Melinda’s friends, a pianist named Charlie De Lisle, mysteriously dies at a party, the suspicion on her husband is heavier. Melinda herself announces that Vic is behind the murder, and Don, a mutual friend, seems to agree. However, with no proof, the investigation dies out.

Melinda then begins seeing Tony, an ex-boyfriend from the past, and invites him over for a meal. Once again, Vic watches silently as his wife flirts with their guest and eventually disappears into a room with Tony. A few days later, Vic picks Tony up on the pretext of showing him a property Melinda is interested in. The two go into the forest where the husband kills his wife’s ex-boyfriend and current lover, weighing the body down and pushing it into the river. At a picnic soon after, however, Vic notices Tony’s corpse floating back up and tries to hide it again, only to be spotted by Don.

The film’s climax begins rather abruptly, with Don trying to recklessly drive away and reveal what he has seen even as Vic gives chase on his mountain bike. The forest dirt roads are slippery, and Don eventually skids and drives off a cliff, ending up in a brutal accident. Vic then rides his bicycle home and arrives to see Melinda sitting on the stairs, staring at him.

It then becomes clear that the film’s closing scene is the same as the opening, with one crucial difference. When Vic now returns, Melinda reveals to him that she’s “found Tony,” alluding to the dead man’s wallet that she’s discovered hidden in Vic’s greenhouse. ‘Deep Water’ then closes with a quick shot of the wife burning Tony’s ID, essentially signifying that she’s become an accomplice in the murder.

And so, it appears that Melinda has made her peace with her husband’s crimes and is possibly going to stay back with him. However, for all their marital trouble, the final equilibrium that the couple reaches is a remarkably dark one, leading us to wonder why Vic would go on his killing spree at all instead of just walking away from the relationship. However, as the film details, the husband is too attached to his wife and daughter to tear the family apart. He also strongly believes that since he fell in love with Melinda for who she is, he mustn’t try and change her.

The only option left seems to be to either scare away her lovers (as he does with Joel) and, since that doesn’t work too well, to just kill them. As an interesting aside, it appears that Vic’s connection to snails possibly symbolizes his unfathomable attraction to something (in this case, his devoted relationship with Melinda) that most people would find unappealing.

Vic’s first murder — that of Charlie, the pianist, is a combination of built-up frustration and opportunity (finding the would-be victim alone and inebriated in a swimming pool). However, multiple other factors lead to the crime. Vic is still smarting from Joel’s belligerent behavior. The men Melinda picks are a lot like her — unapologetic and brash (though they seem to successively tone down from Joel to the pianist Charlie to the sustainable housing visionary Tony). In fact, Vic even compliments Tony, telling Melinda that she’s finally picked someone with brains. Of course, the fact that Vic has literally bludgeoned Tony’s head moments ago puts a macabre spin on his use of the word “brains.”

The husband’s frustration is only worsened by Melinda’s occasional sexual advances on him, which quickly turn cold. Interestingly, the murders seem to act as a form of release for Vic, as is evident from his celebratory demeanor after killing Tony. In a way, Melinda also seems to like the fact that Vic is killing for her. Having regularly blamed him for lacking in passion and being unexpressive, she later says (rather proudly) that she is the thing Vic killed for. Perhaps she reasons that by going to the lengths he does to have her for himself, Vic is her most passionate lover, after all. Thus, in a twisted way, killing the wife’s lovers seems to be a fitting solution for the film’s central couple.

Does Vic Get Caught?

Vic’s blatant murders, despite seeming risky, don’t get him caught even as the film closes on an uncertain note. With Melinda burning Tony’s ID, it appears that the generally vocal wife has decided to become an accomplice to her husband’s crimes. There is still a chance that Don survives his brutal car accident and eventually reveals that he saw Vic with Tony’s body. However, there is only a very slim chance that anyone could survive a wreck of that magnitude.

The main danger of Vic getting caught stems from Tony’s body being discovered, which could be calamitous for the husband. Considering one of Melinda’s lovers (Charlie) has already been found dead, another one of her “friends” ending up dead would put an inescapable amount of suspicion on the husband. Additionally, and perhaps a little foolishly, Vic uses his belt and his pet’s leash to tie rocks to Tony’s corpse, meaning that if the body is discovered, it’ll be even easier to connect the crime to him. Thus, Vic isn’t caught yet, but the possibility remains open.

Why Does Melinda Burn Tony’s ID?

Melinda burning Tony’s ID in the film’s closing scene signifies a major shift in her character. From vocally distancing herself from any form of violence connected to Vic, be it the drones his microchip powers or him potentially killing Charlie, the wife now becomes an accomplice to Tony’s murder.

Though Melinda initially packs her bags and decides to leave Vic, their daughter Trixie remains adamant about not leaving. This seems to stir a change of heart in Melinda, who finally realizes that she, too, doesn’t want to tear their family apart. Thus, her next logical step becomes preventing her husband’s crime from being discovered to avoid him going to prison for life, leading her to burn Tony’s ID, which is an alarmingly incriminating piece of evidence.

Burning Tony’s ID also has a deeper meaning and seems to signify Melinda possibly departing from her old ways of taking on multiple lovers and consequently torturing her devoted husband. However, the couple’s new dynamic is left a mystery, and it is possible that Melinda could, at some point, use her knowledge of Vic’s crimes against him. However, considering she knows he is capable of murder, it is unlikely she will push him too far.