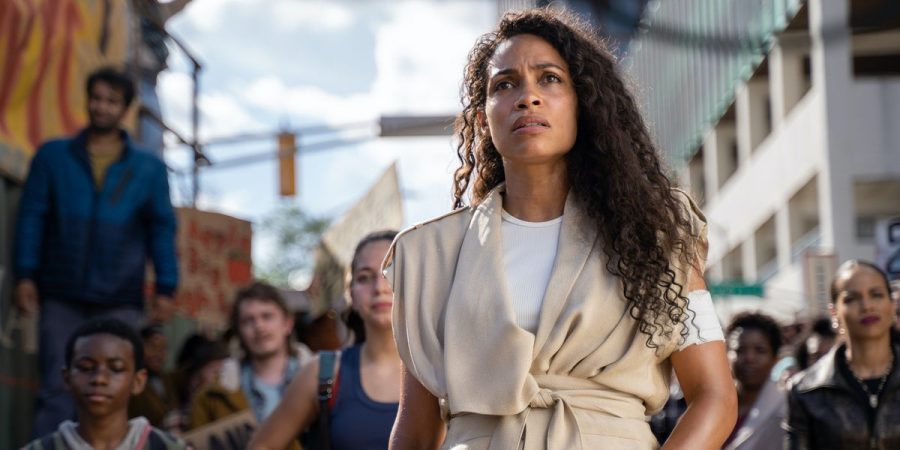 ‘DMZ’ is a dystopian drama series that follows Alma Ortega, an NYC medic who ventures into the highly dangerous demilitarized Manhattan Island searching for her long-lost son. However, in her quest, Alma inadvertently becomes a ray of hope in the dark and seemingly doomed dystopian land. Created by Roberto Patino, the HBO Max original series first premiered in 2022. It is based on Brian Wood and Riccardo Burchielli’s DC graphic novel series of the same name.

Since its release, the series has received positive reviews from critics. With a complex and gripping tale of politics and family bonds that unravels the various facets of human nature and society, the series has boundless potential for a follow-up season. Therefore, viewers of the show must be curious to learn whether there will be a second season. In that case, allow us to share everything we know about ‘DMZ’ season 2!

‘DMZ’ season 1 premiered on March 17, 2022, on HBO Max. The first season of the drama series contains four episodes, each approximately an hour in length. All four episodes were released on the service together on the same day. ‘DMZ’ has received positive reviews from critics, praising its performances and visual style. However, some critics have reacted negatively to the overall narrative and pacing.

As far as the second season is concerned, here’s what we know as of now. HBO Max or the show’s creator Roberto Patino are yet to make an official comment on the possibility of a follow-up season. The network hasn’t officially canceled the series yet, so viewers can still hold on to the hope of a second season materializing. However, ‘DMZ’ has been marketed as a miniseries, indicating there are no immediate plans for a season 2.

Nonetheless, if the series proves to be popular enough with the viewers and meets the streaming platform’s performance standards, a second season could be greenlit in the upcoming months. Moreover, the comic book on which the series is based could easily provide inspiration for future episodes. Hence, if HBO Max officially renews the series in the coming months, we could see ‘DMZ’ season 2 premiere sometime in Q2 2023, at the earliest.

In the potential second season, we expect most of the main cast members to reprise their roles. However, Hoon Lee is unlikely to return given the death of his character in the first season. Most of the supporting cast members are also likely to appear if the show gets renewed. Moreover, we could see some fresh faces joining the cast for season 2.

DMZ Season 2 Plot: What can it be About?

In ‘DMZ’ season 1, Alma searches for her son, who now goes by the name Skel. In the season 1 finale, Skel reconciles with his mother and helps her take down his father, Parco Delgado. After Parco’s nefarious plan is ended, Skel leaves the DMZ searching for a new life. Meanwhile, Alma decides to remain behind and becomes the governor of the DMZ.

The prospective second season could focus on the challenges Alma faces while building a new social order in the DMZ. Moreover, new developments in the conflict between the US Army and the Free States Army could change the political order in the DMZ. Season 2 could also shed light on Alma’s relationship with Odi and Skel’s life outside the DMZ.

Read More: Where is DMZ Filmed?