Do Enola and Tewkesbury End Up Together in Enola Holmes 2? 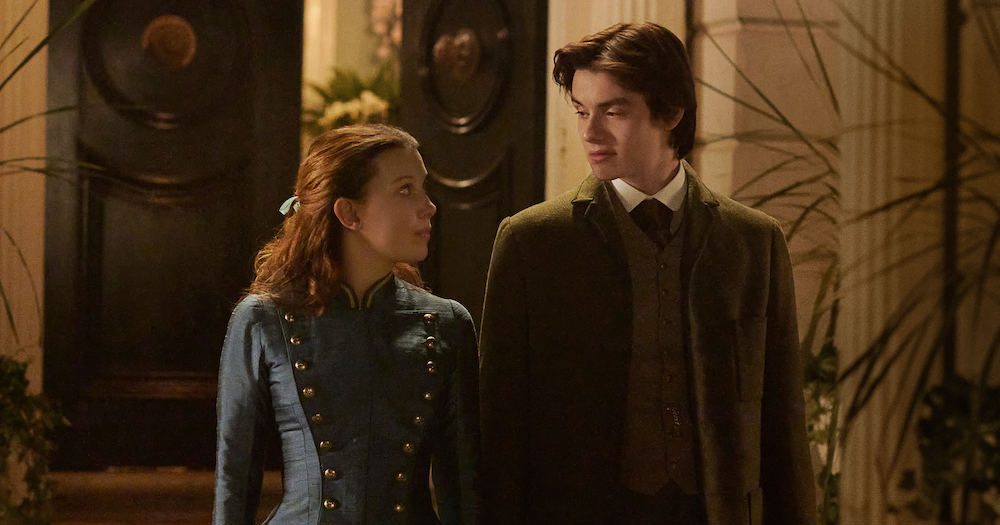 Netflix’s ‘Enola Holmes 2’ brings back the titular detective, who has to solve the case of the mysterious disappearance of a girl named Sarah Chapman. Her investigation begins at the matchstick factory where Sarah used to work, but soon, Enola finds herself walking amidst the high society of London, trying to find the culprit amongst the most reputed of men. Being in their world requires Enola to learn their ways, which is where Tewkesbury comes in.

The pair first met each other in ‘Enola Holmes’ where Enola saves Tewkesbury’s life. By the end of the film, it is clear that there is something between them, but their feelings remain unprofessed as Enola focuses on her career as a detective while Tewkesbury busies himself with politics. The sequel reunites them, but does it mean that they will finally get together? Let’s find out. SPOILERS AHEAD

Do Enola and Tewkesbury Get Together?

Despite the fact that they like each other, we find Enola and Tewkesbury rather estranged at the beginning of ‘Enola Holmes 2’. While he sends her letters, requesting to meet up, she keeps ignoring his messages. It would mean that she wants to keep a distance from him because she doesn’t feel about him the same way. But then, we discover that Enola has been sort of stalking him for some time.

Almost every day, Tewkesbury takes the same road to the Lords, and Enola occasionally has breakfast in the park that falls on his way. Sometimes, he takes the other road, but Enola knows that too. She also keeps tabs on him by reading all the things that are being written about him in the papers, be it about the work he has been doing or about the fact that he is the most eligible bachelor in London right now.

All of this confirms that Enola likes him back, but she tries to keep a distance from him for the same reason she doesn’t turn to Sherlock for help with her case. As a woman, she knows that the moment she is associated with a man, all of her accomplishments will be overshadowed by her companion. If she solves a case with Sherlock, all the credit will go to him. And if she takes help from Tewkesbury, or is even found linked with him in any way, the success of her endeavors will be attributed to him one way or another. At the beginning of her career, she wants her name to be the thing that leads people to seek her out, not someone else’s.

While Enola’s thoughts on the matter are justified, she learns that taking help from others or collaborating with them doesn’t mean that a person’s skills are to be questioned. Her mother advises her to allow other people into her life and become better, rather than stay alone trying to do everything by herself. Enola does that with both Sherlock and Tewkesbury and discovers that not only does she need their help, but she can be helpful to them too.

This newfound acceptance to form alliances thaws the ice between her and Tewkesbury, who is more than happy to accompany her on her adventures. While on their way to Paragon Theatre to find the documents hidden by William and Sarah, Enola and Tewkesbury kiss. After wrapping up the case, Enola goes back to working on getting the word out about her detective agency, but this time, she doesn’t push away the people who care about her. Edith helps her with the new office, while Sherlock offers her better lodgings and even a business partnership. As for Tewkesbury, she has finally let go of her inhibitions about being with him. This time, when he sends her flowers and writes her a letter, she replies. In the final scene, they walk hand in hand into the busy streets of London, affirming the status of their relationship.