Does Monica Dutton Die in Yellowstone? Is Kelsey Asbille Leaving the Show?

A key component of the narrative in ‘Yellowstone‘ is the conflict between the Dutton family’s Yellowstone Ranch and the Native American leader Thomas Rainwater’s Broken Rock Reservation. While the conflict has filled over into the lives of various characters, no character knows both sides of it as well as Monica Dutton-Long.

However, major developments for Monica in the show’s fourth season have raised speculation that Kelsey Asbille, who essays the role, is poised to exit the hit Western drama in the near future. If you are looking for details about Monica’s fate and Asbille’s future on the show, here’s everything you need to know!

Does Monica Dutton Die in Yellowstone?

Monica first appears in the series premiere episode titled ‘Daybreak.’ She has a Native American background and is the wife of Kayce Dutton. Together the couple has a son named Tate. Initially, the family lives on the Broken Rock Reservation, and against Monica’s apprehension, Tate begins to spend time with his grandfather, John. Eventually, the family moves to the Yellowstone Ranch after Kayce takes an active role in the ranch’s activities following his brother Lee’s death. 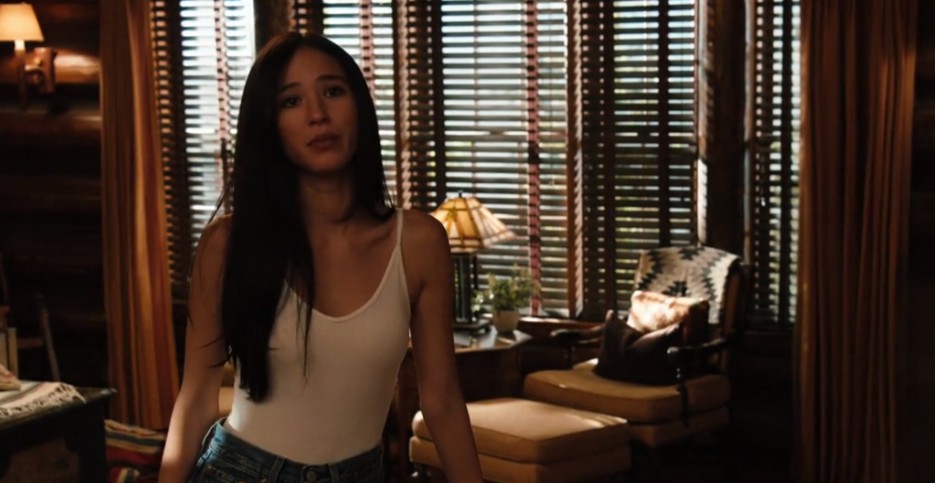 In the third season finale of ‘Yellowstone,’ various members of the Dutton family become subject to a series of attacks. In the fourth season premiere, Monica is also attacked by a masked man. As the man drags Monica away, Tate picks up a gun and shoots the man dead. Monica survives, but she and Tate are traumatized by the incident.

Although Monica is alive on the show, that doesn’t necessarily clear the uncertainty over Kelsey Asbille’s future. In the third episode of season 4, Kayce and Monica get into an argument about how Kayce deals with the traumatized Tate. Monica finally reaches her breaking point and admits that she resents Kayce for bringing her and Tate to live at the ranch. The fight not only paves the way for Monica and Tate to leave the Yellowstone Ranch but also for the characters to be written off the show.

In an interview, Asbille seemingly revealed that Tate and Monica would be leaving the ranch in the fourth season. She also added that the season finale would feature a major cliffhanger that will raise questions about Monica’s future with Kayce. Therefore, we can expect Asbille to appear throughout season 4. However, the ‘Teen Wolf‘ fame actress’ future on the show beyond season 4 remains unclear.

Asbille has signed on to star in the television adaptation of the podcast ‘Gaslight.’ How the actress’ new commitment affects her series regular status on ‘Yellowstone’ remains to be seen. As of now, Asbille hasn’t publically expressed a desire to exit the Western drama. However, if she opts to leave the series, the impending season 4 finale cliffhanger should provide an easy route for her character to be written off. Of course, if the production schedules of both the shows do not overlap, Asbille could very well reprise her role as Monica beyond ‘Yellowstone’ season 4. For now, fans of the show can look forward to seeing how Monica’s storyline plays out in the remaining episodes of the fourth season.