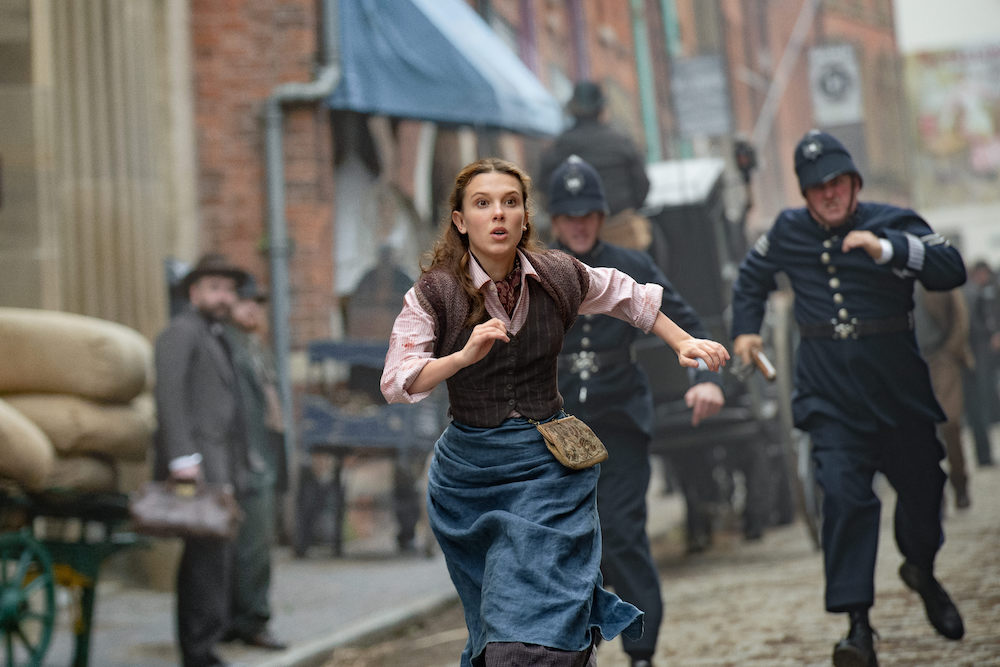 Netflix’s ‘Enola Holmes 2’ follows the story of the eponymous detective who embarks on her first professional case following the events of the first film. This time around the waters are a lot murkier and her enemies are much more powerful and dangerous. Enola learns a lot of lessons along the way, especially when it comes to accepting help from others. Her relationship with Tewkesbury and her collaboration with Sherlock also become an important part of her story, but it is the case that truly tests her mettle and molds her as a detective.

The film entangles Enola’s case with Sherlock’s, which means that things get a lot messier than both of them had initially imagined. The case takes them from a working-class person to those that wield a lot of power, while also revealing an unlikely antagonist who seems to be at the center of it all. Here, we make sense of all that goes down at the end of the film and what it means for the future of the characters. SPOILERS AHEAD

Enola Holmes starts a detective agency but finds herself in the shadow of her much more famous brother, Sherlock. Just when it looks like no one will trust her with a case, a young girl named Bessie shows up at her door, asking for help. Bessie’s sister Sarah, who worked at the matchstick factory has gone missing. The case seems simple enough for Enola to track down the girl, but slowly, a bigger picture comes into view. While she tries to make sense of Sarah’s disappearance and the death of her best friend, Sherlock is entangled in his own case.

At first, the Holmes siblings decide not to get the other one involved in their case, but soon, it turns out that their cases are connected. The girl that Enola is looking for is a piece of the puzzle that will help Sherlock track down the elusive and brilliant villain who is playing a game with him. Things get much more dangerous as Enola becomes a wanted criminal. A lot of blood is shed before the whole thing is resolved.

In chasing after all sorts of leads and pulling on every possible loose thread, Enola and Sherlock discover that the real culprit isn’t someone visibly powerful. It is someone who hides in the shadows and goes unnoticed even in the most important of rooms. This allows that person the power to manipulate the events according to their need. This person turns out to be Miss Mira Troy, the secretary of Treasury Minister Lord McIntyre.

Sherlock’s case had someone channeling money from different government accounts and sending it through a series of banks, making it impossible to track down the identity of the person. Ms. Troy was privy to all dealing of Lord McIntyre and knew just the places that she could siphon money from. Because she was a woman, she was never paid any heed, and this serves as both motivation as well as a great cover for her.

Things would have gone just fine for Ms. Troy, but Lord McIntyre’s deal with William Lyon’s father derailed everything. They made a deal that allowed Mr. Lyon to keep using white phosphorus in his factory, despite its detrimental effects on the workers, while Mr. McIntyre got a lot of money in return. To expose this corruption, Sarah stole the pages that detailed the entire transaction. While this was bad news for the two men involved in the deal, the money trail also endangered Ms. Troy’s operation. To handle the matter, she employed the services of Superintendent Grail, who tracked down Sarah and Mae to get the papers from them. This is when Enola comes into the picture.

In the end, Ms. Troy, who first revealed herself in a cipher to Sherlock as Moriarty, is arrested. But she promises that she will return, and it looks like she is keen to stay true to her words. Sometime after her arrest, Sherlock finds a headline in a newspaper that reveals that Moriarty has escaped, in a similar fashion to Enola’s escape. The picture in the newspaper has a toppled-over carriage. Considering that she couldn’t have done it alone, she had help from outside, which means that she is much more resourceful than Sherlock anticipated.

At the end of the film, both Enola and Sherlock succeed in solving their case. Enola locates Sarah, while Sherlock finds his Moriarty. Mae’s and William’s murderer turns out to be Grail, who meets a dismal end of his own. While this is a great win, the core purpose of the entire conflict remains unresolved. It all started with Sarah, Mae, and William wanting to expose the corruption that led to the deaths of many girls at the factory. They wanted people like McIntyre to be held accountable for their actions and for the conditions in the factory to change for the better. But the hope for all that is burned away by McIntyre.

All the evidence that Sarah had collected goes away, but she knows the entire truth, and Enola insists, that it’s enough to bring about change. At the factory, Sarah, Bessie, and Enola reveal the truth to the factory workers and encourage them to stand up for themselves because the factory owners are certainly not going to do that. At first, the women are hesitant to speak up against their boss and risk losing their jobs. But then she invites all voices to become one.

Enola starts stomping the cane in her hand, which is followed by the rest of the women stomping their feet and marching out of the factory as a sign of protest. A similar thing happened at the Bryant & May match factory in 1888, which led to the much-needed reforms demanded by the workers. We expect the same thing happened to Sarah and her coworkers as well. As for the shady deal between Mr. Lyon and Lord McIntyre, Tewkesbury takes it upon himself to expose this corruption. He collaborates with Inspector Lestrade to build a case against Lord McIntyre who is eventually arrested and removed from his seat as the Treasury Minister.

Both these outcomes prove what Enola’s mother had advised her while breaking her out of prison. While she is a very clever and independent person, she will need to open herself to receiving help from others, from time to time. Throughout the film, we find both her and Sherlock adamant about solving their cases on their own. Eventually, however, they discover that one could not have cracked the mystery without the other. In a similar fashion, exposing corruption also takes people collaborating on different fronts and coming together to save the day.

Why Does Enola Refuse to Become Sherlock’s Partner?

One of the things that pushed Enola Holmes to prove her worth was the fact that people, including her own brothers, were in the habit of underestimating her. When she opens her detective agency, everyone questions her skills on different grounds. She is young, she is a girl, is she just a secretary, can’t she get Mr. Holmes on the case? All of these things are repeatedly thrown at her until she is forced to close her offices. But then, Sarah Chapman’s case arrives just in time.

While finding Sarah, Enola’s path crosses repeatedly with Sherlock’s who questions her too. From giving her unsolicited advice on how to be a detective to basically telling her to leave the whole thing and go back to a life of comfort, he remains skeptical of the fact that Enola can not only take care of herself but is also very good at her job. In the end, he has no choice but to accept that Enola shows promise as a detective and he needs to have some faith in her. This prompts him to offer a partnership to Enola and is a little surprised when she refuses him.

It is no secret that Enola looks up to Sherlock. She is thrilled about being in his apartment at Baker Street and looking at his research strewn about the whole place. In an ideal world, she wouldn’t have batted an eye before accepting his offer, but she does not live in an ideal world. She knows that while Sherlock might view her as his partner, the rest of the world will not. No matter how good she gets at solving the cases, people will never be able to see beyond Sherlock, and this wouldn’t lead her anywhere.

Enola is determined to make a name for herself, to prove herself just as competent a detective as her brother, and the only way that can happen is if she does it on her own. She has to carve a place for herself in the world, and she can’t do that living under Sherlock’s shadow, which is why she can’t accept the offer of a partnership with him, generous as it might be.