Feria Ending, Explained: Are Sofia and Eva Dead or Alive?

‘Feria: The Darkest Light‘ follows two young sisters whose lives are turned upside down when their parents are blamed for ritualistically killing twenty-three people. Set in the small town of Feria, the Spanish supernatural thriller series follows Sofia and Eva’s surreal journeys as they try and uncover the secret behind their parents’ disappearance and alleged crimes.

The deeper they dig, however, the more surreal things get. By the end, Sofia, who is younger and more impressionable, seems to be firmly entrenched in some form of dark magic. Even the skeptical police detective Guillén is brought face to face with some realities that he finds hard to believe but is forced to. The truly ominous cliffhanger season-ending leaves the fates of everyone hanging in the balance, so we decided to take a closer look to see if we could pick up some hidden details. Let’s dive into the ending of ‘Faria: The Darkest Light.’ SPOILERS AHEAD.

The series opens with Eva and Sofia leaving for a local midsummer party, where the latter briefly blacks out while diving in the lake. The next morning, the two sisters are surprised to find their parents missing and are soon informed by the police that Elena and Pablo (Eva and Sofia’s parents) are wanted in connection with multiple murders. We are then taken to the ominous site outside a local mine, where the naked dead bodies of twenty-three people lie out in the open. It soon becomes clear that they were killed while performing a dark ritual led by Elena.

As the two young girls grapple with their shock and grief, the rest of the town turns on them, demanding answers for the actions of their parents. Eva tries to put on a composed face for the outsiders but then begins to hallucinate during a television interview, which ends in disaster. Sofia, meanwhile, is accosted by a mysterious elderly man who promises to reunite her with her mother.

Desperately missing Elena, Sofia finally goes along with the man and gradually agrees to participate in the dark rituals he performs on her. The elderly man, named Samuel, is assisted by a woman named Blanca and a refugee named Halid. All of them claim to await the coming of the Kingdom, which will free them from endless birth and death cycles. Pablo is eventually caught by the police and reveals to his daughters and the skeptical lieutenant Guillén that Elena was trying to save everyone by keeping the gates of the Kingdom closed.

Guillén is furious, but Sofia realizes that perhaps she has made a mistake mixing with Samuel and the cult. However, it is too late, and the young girl is possessed by a small, otherworldly creature called Dekta. In a surreal moment, Sofia uses a knife to cut the ominous entity out of her stomach. Dekta then crawls to the center of the small town of Feria and turns into a black sludge, slowly getting absorbed into the houses and some of the residents.

Feria: The Darkest Light Ending: Is Sofia Dead or Alive? Why Does She Open the Fifth Veil?

The season finale opens with the town of Feria in the dark and ominous clutches of a demonic entity called Dekta. The powers of the entity concentrate within a local doctor called Belda, who then embarks on a search for Sofia, trying to get her to complete the ritual (called raising the fifth veil). The young girl is kidnapped from the hospital, where she is recovering from her recent injuries, and brought to the mine, which contains “the Temple” used to bring Dekta and other demonic entities forth. 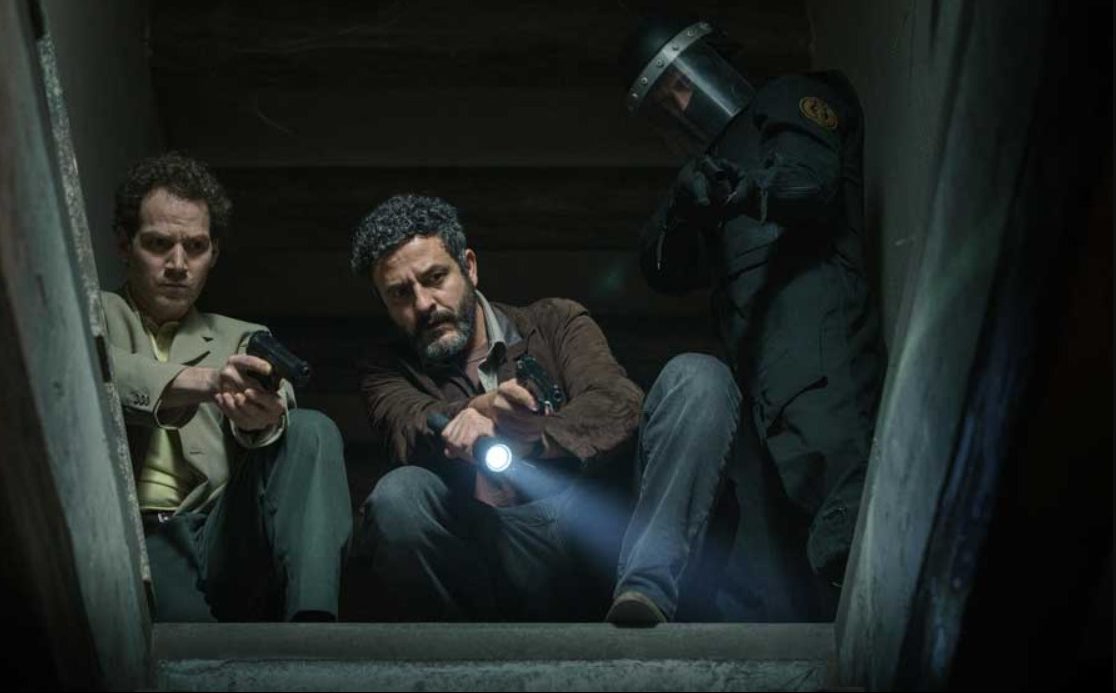 Meanwhile, Guillén confronts Blanca, but the latter soon goes into the throes of a seizure and regurgitates the small, creature-like form of Dekta. The policeman is shocked to see the otherworldly entity and fires at it, killing it. In the Temple, Sofia and Belda are confronted by a demonic entity named Umma, who kills Belda and opens up a doorway. Realizing there is no alternative but to offer herself up as the key to the door, Sofia says as much to the doorway, thus opening the fifth veil. A massive demonic entity subsequently appears in the dark doorway. The season closes with Sofia looking up at the creature in horror and letting out a bloodcurdling scream.

And so, the season closes on an overbearingly ominous note, with Sofia having done the unthinkable. Despite her parents’ best efforts and Pablo’s explicit warning, the young girl decides to finish the dark ritual and open the fifth veil, thus unlocking the doorway to a demonic dimension known as the “Kingdom.” Her terrified scream, which closes the season, tells us that things are not looking good for Sofia, or in fact, the rest of Feria. However, from what we know, it seems like Sofia is not dead (yet) but is likely undergoing a fate worse than that.

If what Pablo and Blanca say about the Kingdom is true, it is a demonic dimension akin to hell, which brings with it “fire, sword, and war.” With the door opened, Feria is likely to turn into a hellish, demon-infested land. As is already visible with some residents, the demonic powers will spread and infect the rest of the small town’s citizens, trapping them in a perpetual nightmare. As the “perfect being” who unlocked the doorway, Sofia might have special significance in the post-apocalyptic Feria. However, this likely isn’t a good thing, and the young girl is going to be as tormented as much (or more) than the others. 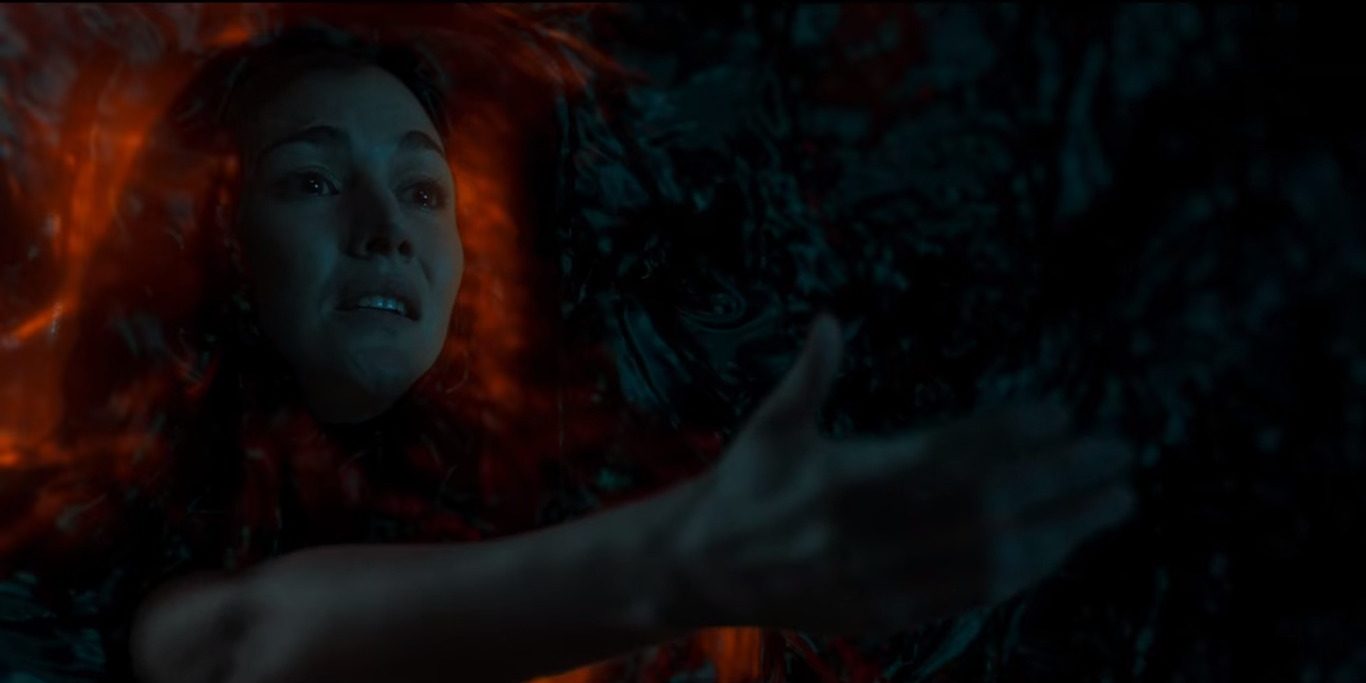 Perhaps the only ray of light is that Sofia might finally get to see her mother, who has been trapped in the hellish dimension ever since she tried to stop the doorway from opening many years ago. Wanting to be reunited with Elena is what has driven the troubled young protagonist since the start, and, despite the unthinkable circumstances surrounding it, the mother and daughter might just be reunited.

This also brings us to some other possible reasons why Sofia decided to open the doorway, knowing what lay on the other side. For one, after her friend Mar’s father (Lozano) tries to shoot her so that she can’t open the door, Sofia realizes that she will never be able to live in peace without people trying to kill her. On the other hand, as Pablo rightly states, the cult will never stop chasing the “key” to unlock the Kingdom. Realizing she doesn’t want to die, the only option Sofia sees is to open the doorway to the Kingdom, leading to the unthinkable.

Is Eva Dead or Alive?

Eva goes through her own tumultuous journey, racked by fear for the wellbeing of her younger sister. In the season finale, when the demonic entity Umma permeates through the hospital looking for Sophia, her elder sister Eva goes through a surreal living nightmare. Not knowing she is hallucinating, Eva imagines meeting her father in the hospital corridor. Pablo then wordlessly begins to strangle his daughter, paying no heed to her surprised screams.

Fortunately, Eva eventually snaps out of the hallucination and comes back to reality. However, she then realizes that Sofia has been kidnapped and reasons that the young girl is probably being taken to the temple. Thus, the last that we see Eva, she is still alive and on the way to the temple in the mine. Like all the other residents of Feria, her fate is ominous, considering her sister has just opened the doorway.

Read More: Will There be a Feria Season 2?