10 Games You Must Play if You Love RimWorld 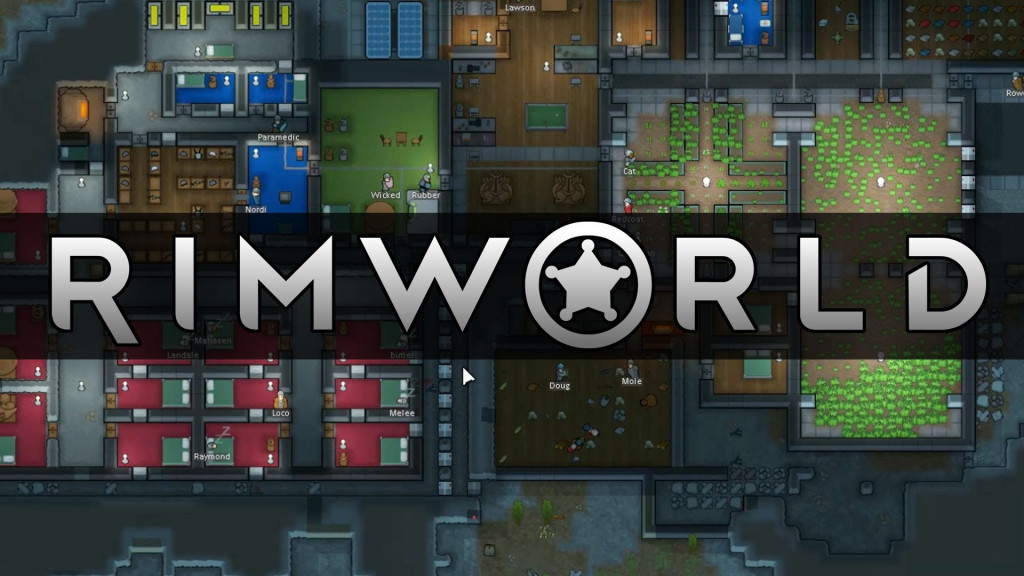 I personally am a huge fan of simulators, so whenever I can get my hands on one, I check them out at any cost. RimWorld is one of those games that I have been waiting for a long time and when the game was released, it was everything that I was hoping for. Colony builders and management sims can be extremely addictive and when we looked into the genre some more, we managed to discover a lot of hidden gems. Now there might be other titles that are better than some of the games on this list but here, we’ve tried to add a lot more variety. So with all that said now, here is the list of video games similar to RimWorld that are our recommendations. You can play these games like RimWorld on PS4, Xbox One, Xbox 360, PC, iPhone, Android, mac or even online. 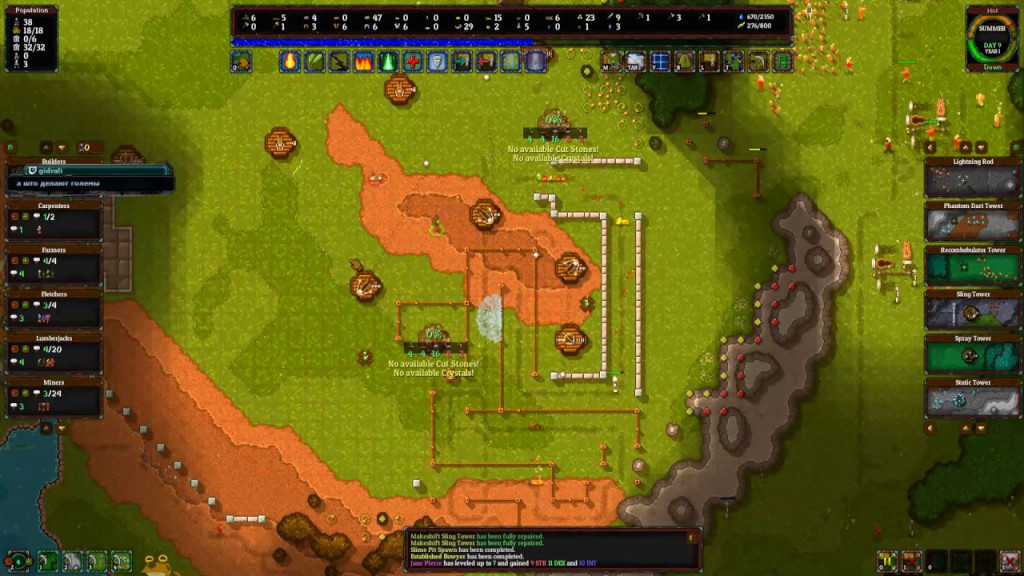 ‘Rise to Ruins’ is a city building simulation currently in Early Access with a release date soon to be announced. The game was put into early access in the year 2014 and still receives regular updates from the developer, so you can expect a pretty stable gameplay experience. It has generated a lot of hype and players who played the game have appreciated its gameplay mechanics and survival elements. It takes a lot of influence from games like ‘RimWorld’, ‘Banished’ and ‘Warcraft’ so you can expect a pretty diversified base building experience, then you can definitely count on this one. The graphics are pixilated styled and will appeal to fans of old school video games and it truly holds up the infrastructure of the game pretty well. We have a lot of expectation from this title and we hope it will able to live up to the amount of hype that it is generating presently. 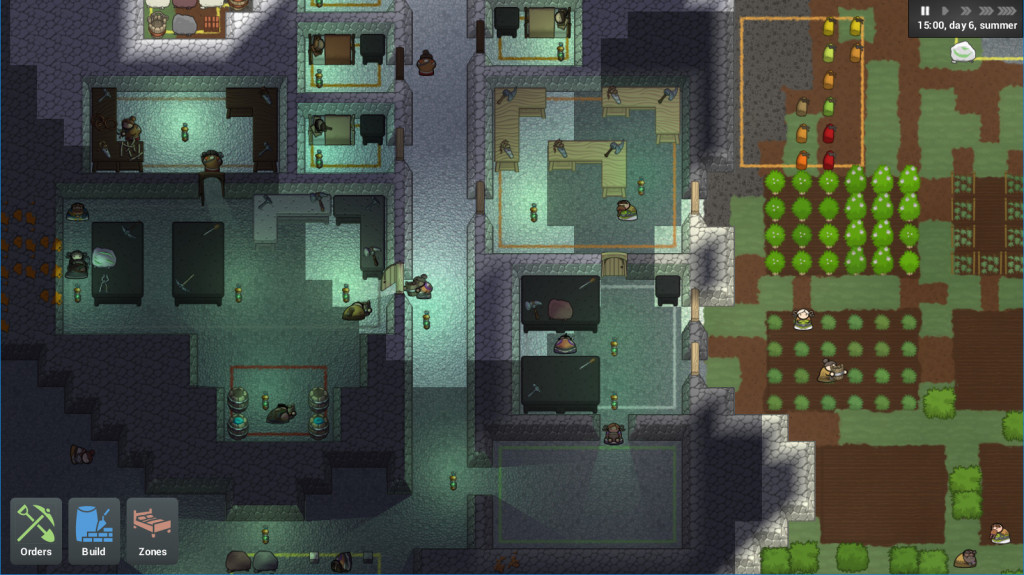 ‘King under the Mountain’ is a city building simulation that allows you to build and manage your own little settlement right from the scratch. The game has a lot of depth and allows its players to simulate the settler’s activities by managing their attributes and understanding their strengths. It has a lot of rogue-like elements to its gameplay as no two maps are generated in the same manner as the other. However, if you do feel like playing the same map twice, then you choose to copy the game’s seed i.e. its randomly generated number, and then paste it when you start a new map. That way the game will generate the same map for you.

Weather and seasons also affect the gameplay as trees and surrounding vegetation will act actively according to it, so make sure to save up your resources. There are multiple factions that you can choose in the game that have their own abilities. If you choose to play as a dwarf, you will have easy access to mining as your base will start out in the mountains and if you choose to play as humans, you will have easy access to farming and so in. Try your hand at maintaining a bustling community at King under the Mountain, a fun little game developed by Rocket Jump Technology. 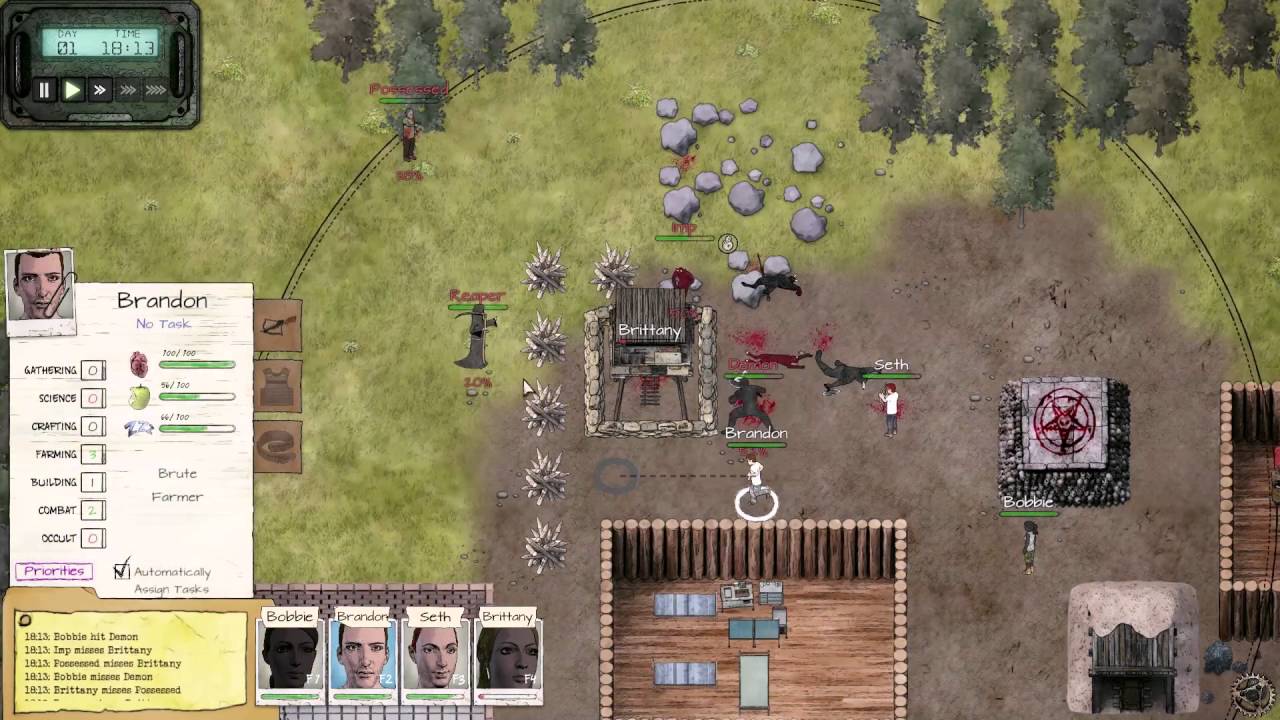 Jugdment: Apocalypse Survival is just what the name says: survival in a post-apocalyptic setting. You have managed to escape from the clutches of a demon which is threatening to destroy the whole world. There are two other survivors along with you and the three of you must start a base camp and then expand it to defend yourself from the demon. There are various economical aspects to the game where you are required to gather and mine for resources that will help you to build your base. You can assign professions to your characters and this will enable them to take up tasks and complete them. A farm is a must as it allows for a continuous supply of food and hence, farming is one of the most important professions in the game. As you build up your base, you have the option to research various rituals which will enable you to ultimately close the demon portal and end the invasion. The game was developed and published by Israeli indie game developers, Suncrash in the year 2018 for the Windows PC system. 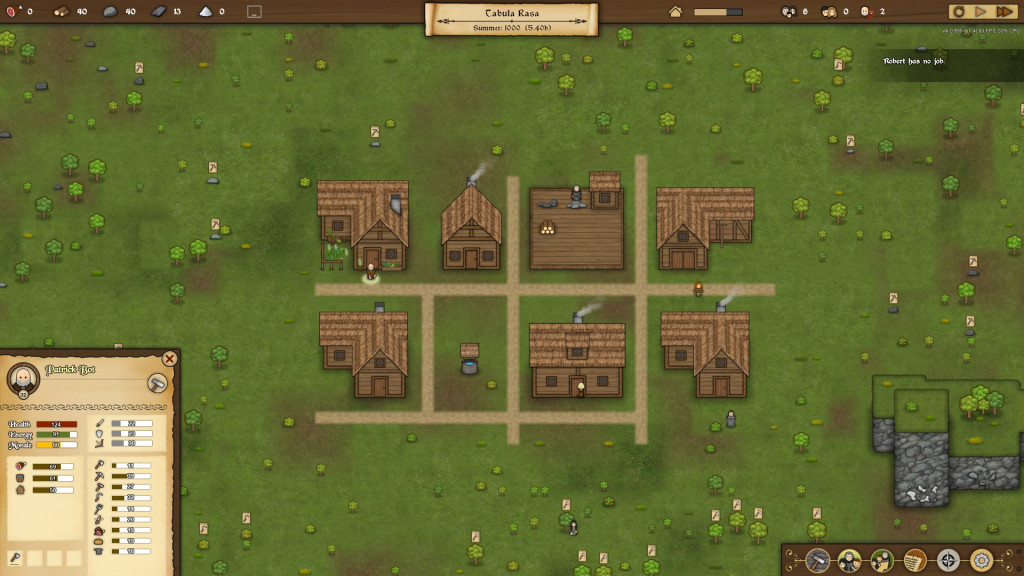 Civitatem is a base building and civilian management sim where you are required to build your colony from scratch in a wild and hostile world. The main focus of the game is to manage the needs and demands of the civilians present in your settlement by providing them with the necessary items. This will manage their happiness levels and motivate them to work for you. Each character in the town has its own strengths and weaknesses, so you are required to assess them and assign tasks to them accordingly. This will ensure that your colony doesn’t run out of resources and each civilian has their own needs met. The game also rewards the player for exploring the map and this is quite an essential element  as we have found out. Exploring the map will help you locate other factions and set up trading routes that will help you to gather and trade resources and make profit. This is extremely important as this can provide you with resources that you don’t have access to and also help set up diplomatic relations. 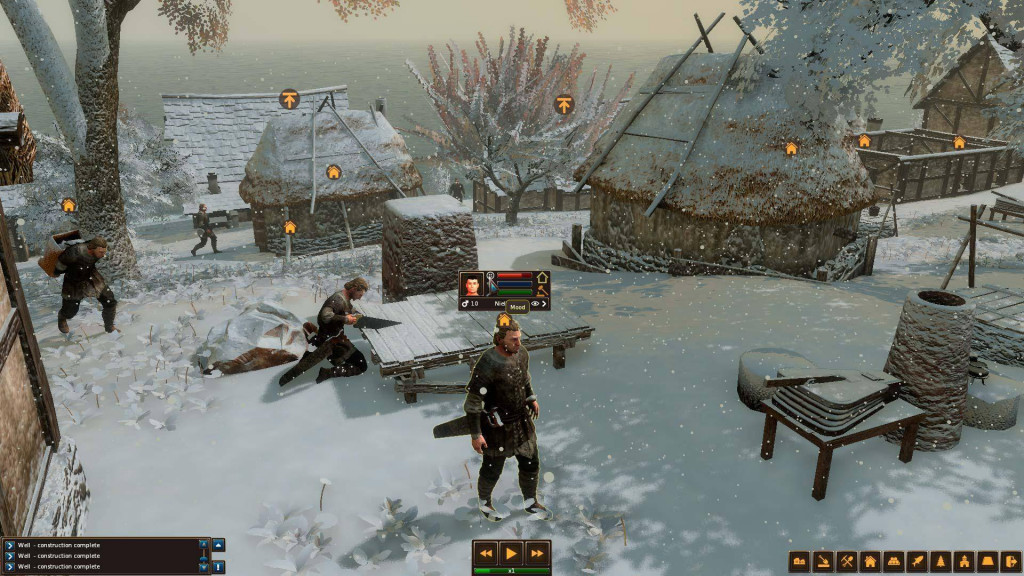 Life is Feudal: Forest Village is a game we had high expectations from but somehow it seems the developers have lost their way. The potential in this game is out of the charts and it contains some of the most in-depth research and advancement mechanics that we have seen so far. The main aim of the game is to drive a tribe of feudal people to their destiny by helping them build up their settlement and progress through the ages. You have a top down view of the settlement but sometimes the game shifts to first person view when completing certain tasks adding to the immersive experience. It’s always fun to look down on your bustling city but being able to travel through the streets in first person view is a different experience altogether. We just hope the developers show the game some love and do not abandon it as there have been no updates recently and the game is ridden with bugs. A few fixes through patches will put this game somewhere at the top of this list but as it stands now, it’s a well ignored treasure. 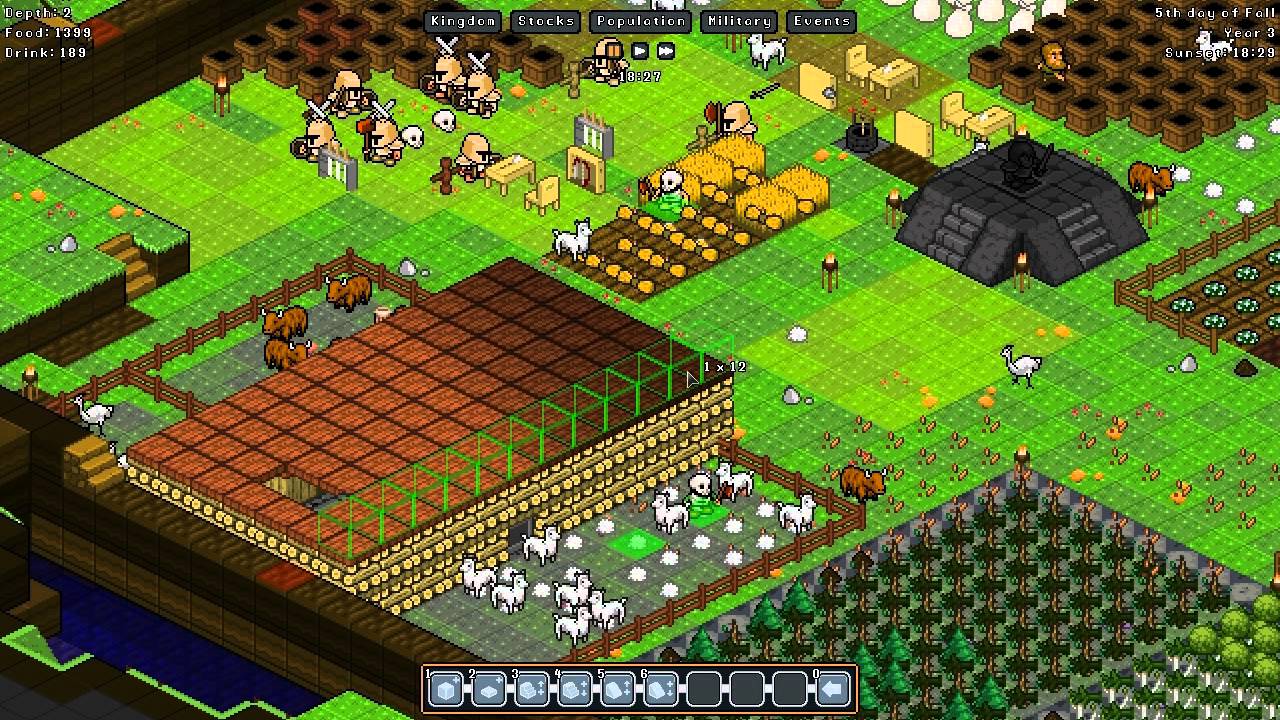 You have all tried your hand at leading humans and we all know how that turned out. So how about leading a colony of gnomes instead? These little furry creatures are extremely hardworking and will stop at nothing to get what they want. The world is set up in such a manner that you are able to break down and reorganize everything you see on screen. Therefore, there is nothing stopping you from your creative best, so go out there and give them gnomes a leader they have been waiting for.

Once you get the basics of the gameplay down, you are free to do pretty much whatever you want and it is extremely easy for one to lose hours and hours in this game without even realizing it. Whatever you give to the game, the game rewards you back for it, making it very hard for you to put it down. You will always feel like digging that one last tunnel as it will provide the gnomes with easier access to certain resources and once that’s done, you will feel the urge to upgrade one last building. We highly recommend this game to fans of the RimWorld universe as it is highly addictive and a fun spin-off to the human settlement sims. 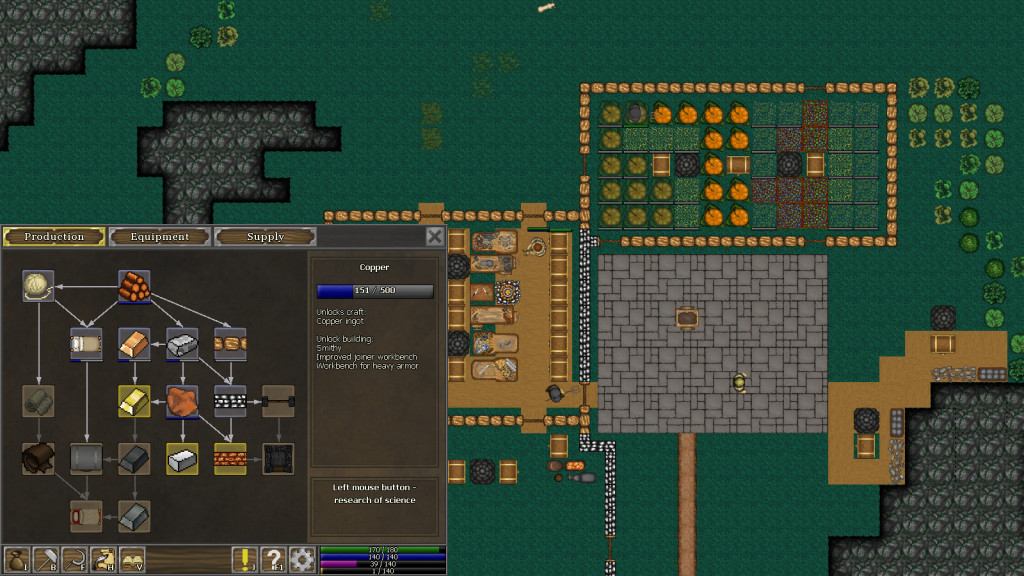 First Feudal allows you to take the position of a feudal lord who is tasked with leading his small to glory. If you felt that the life of a feudal lord is easy in any manner, then be prepared to throw that thought out of the window. This game requires you to manage the various professions of your people so that you are able to gather resources efficiently and ensure that your people do not die out of hunger. Each one of these ‘sims’ can be assigned one profession out of a total of nine and the sim will go on to work for that profession till he is told otherwise. During later stages of the game, you are also required to train and maintain an experienced army that allows you to fend off enemy attacks. You can also set traps for your enemy and lure them into it strategically leaving them baffled. You can already assume that the gameplay is pretty in-depth just like RimWorld, so feel free to check out the game at your own time. 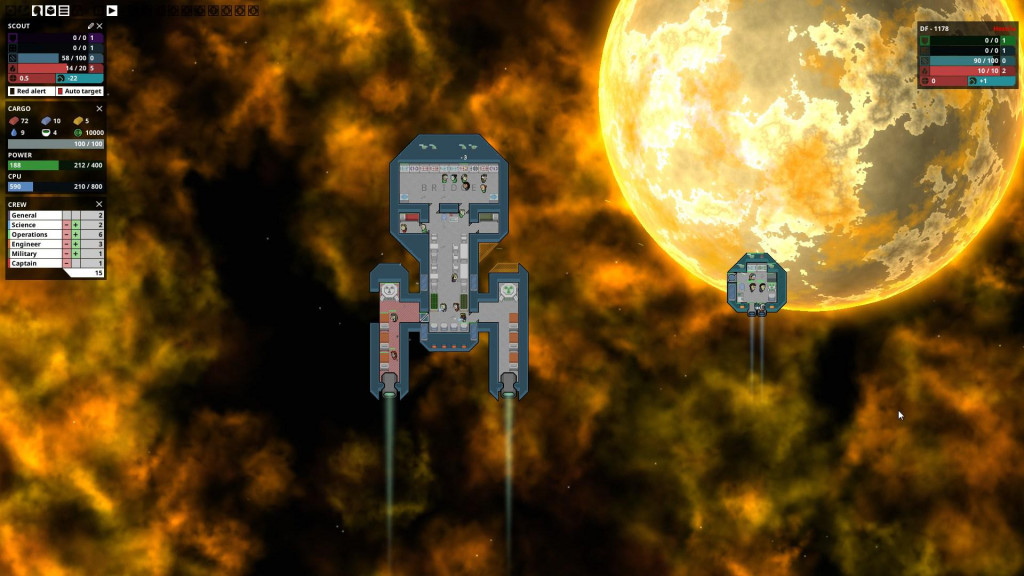 Starship Theory is a survival sim that allows you to build your own spaceship and survive in outer space. The game allows you to upgrade your spaceship according to your wishes and then gather resources. Resources are important as it helps you to purchase weapons that you can dock on your spaceship which will repel enemy invaders. You need to mine asteroids fields which will provide you with additional resources. As you can tell, resource management is the most important aspect of this game. The unique point is it lets you explore outer space and build your own spaceship. We are not saying this is the best game ever created or that it contains the most addictive gameplay mechanics, but it does manage to satiate your interstellar fantasies, so it finds a spot on this list. People who have played ‘RimWorld’ will find a lot in common with this title, so if that’s what you are looking for, then perhaps you might check out this one. 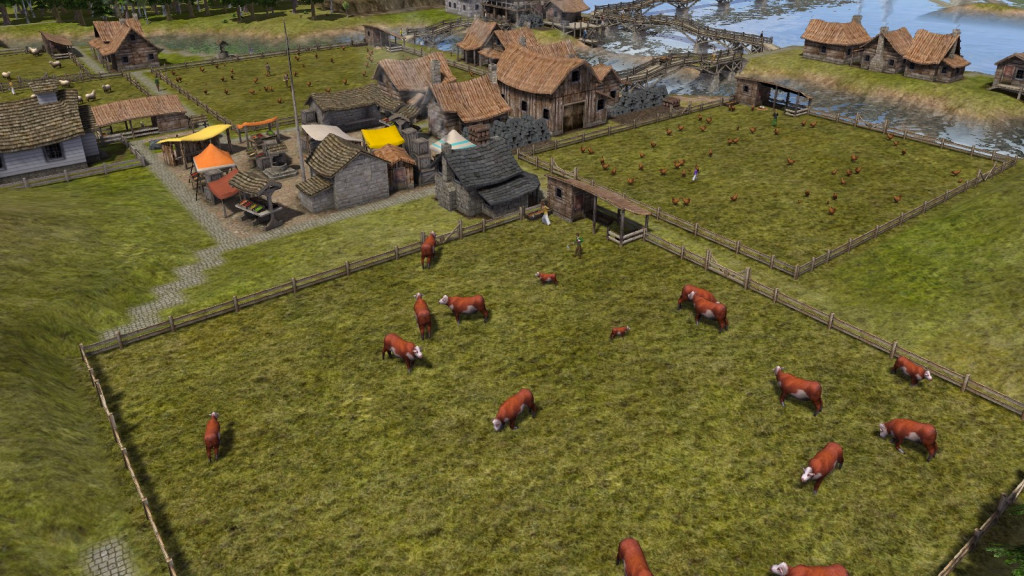 Banished is a game we highly recommend to people who like playing RimWorld. Both these games have a lot in common with each other, so we are sure that fans of either game will like the other. Banished puts in the footsteps of a character who has been banished from their homeland and now survive on their own in another patch of land.  You are given a free patch of land with ample amounts of resources and you must get a colony running. Over the course of the game, there will be various other visitors who will be visiting your colony and you may choose to accept them as your own. Farming and mining for resources is extremely important and you better get a community going or you won’t even survive your first winter. Personally, this is one of my favorite games and I would recommend this game to anyone reading this list. 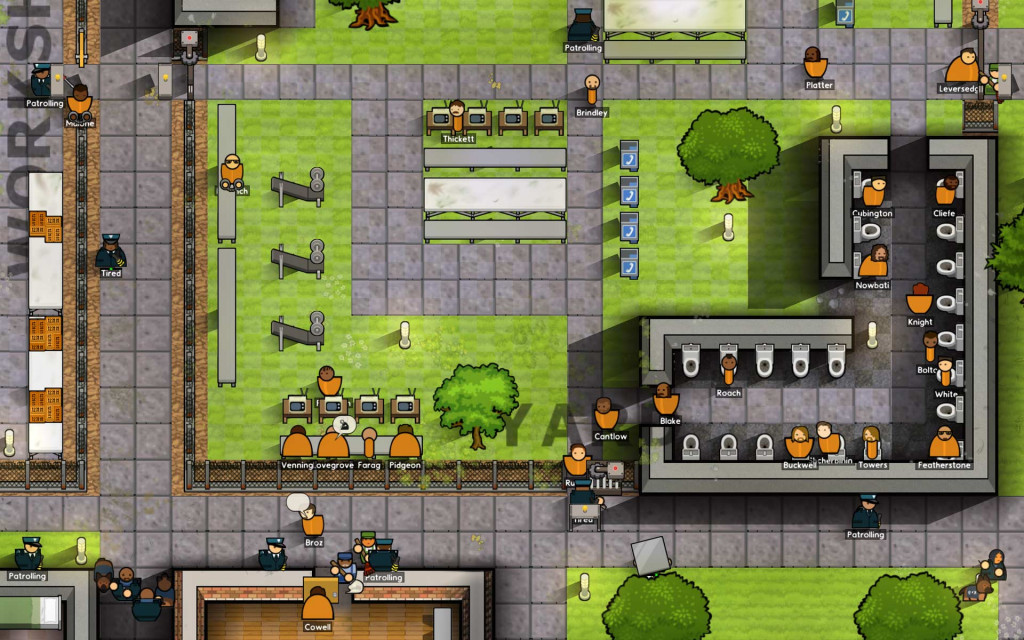 ‘Prison Architect’ is a fun spin-off from the management sim games and though it doesn’t really play exactly similar to ‘RimWorld’, both the games share a lot of similar mechanics. For example, you need to build and manage a maximum security prison as opposed to a city builder in ‘RimWorld’ and also manage the sims within the game and provide them with basic amenities. So the groundwork is the same but where ‘Prison Architect’ shines is its gameplay, which is hilarious and addictive.

‘Prison Architect’ has its own image in the management sim industry and it’s a game you should definitely check out if you liked ‘RimWorld’. There is an escape mode in the game where you are tasked with escaping from a high security prison which is one of the best single player game modes in a management sim we have seen till date. Build prison cells, security rooms, and canteens for your inmates, and upgrade your original structures according to your will but whatever you do, do not forget to build the restrooms as things can get quite out of hand real quick as experience will show.