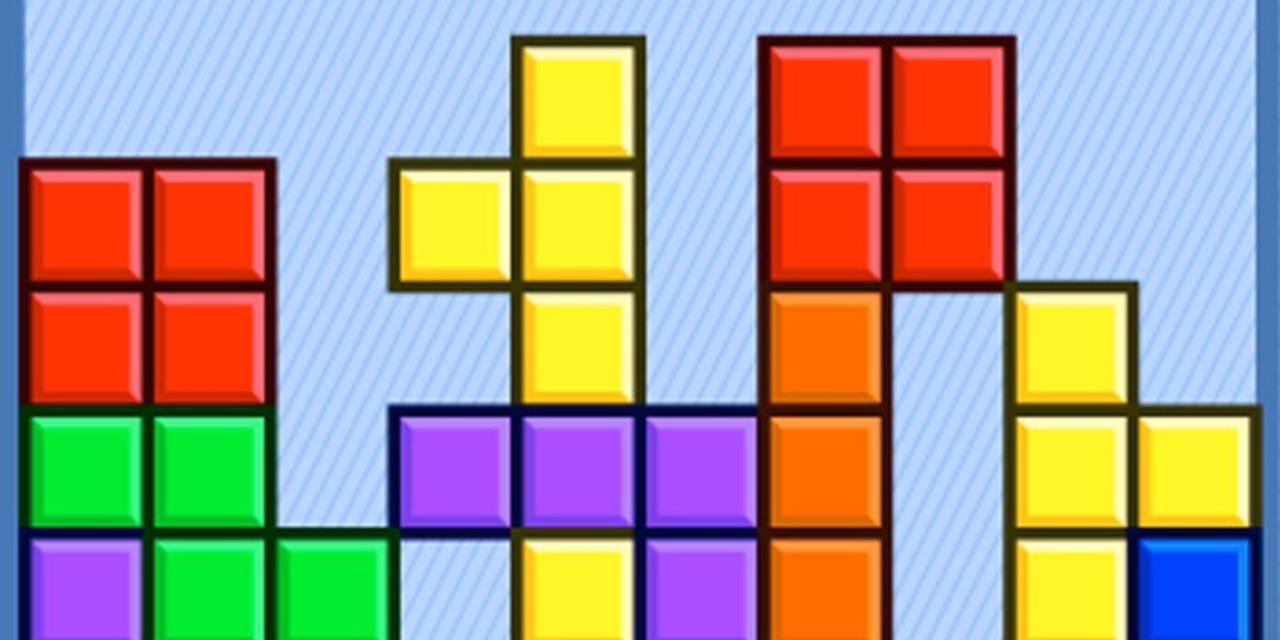 Perhaps there’s nobody in this world who owns a computer device and hasn’t played ‘Tetris’, or at least knows about it. In today’s world, you can enjoy the addictive puzzle game online for free, and moreover, you can play it for as long as you want. The question is not whether you can’t play ‘Tetris’ indefinitely, but it is the fact that you tend to explore new arenas in gaming nowadays which is way past the era of arcade gaming. Although there’s no denying of the fact that the games that resemble ‘Tetris’ are dime a dozen (not quite literally), only a handful of them gives us the look and feel of this timeless classic.

The gameplay of classic ‘Tetris’ is as simple as a puzzle game can get – there are geometric shapes made of exactly four blocks each viz. “I”, “L”, “T”, “z” and a square. While “I”, “L”, “T” and “z” are shapeshifters which change by snapping their shapes to their 90° version, either way, the square shape remains constant throughout (obviously, isn’t it?). The puzzle is to fit all of these in together in a compact way to achieve a Tetris, i.e. clear four lines from the pile at a time, although, one can clear even a single row given everything fits the grid. Once and if the pile touches the ceiling, you’re out and as long as it doesn’t, you play on. As addictive as it can be, ‘Tetris’ has also made me quite anxious whenever I have played it, given the “thickening” pile. Games like ‘Tetris’ would often comprise salient features like building blocks, time limits, the abstract nature of the puzzles, more of a laid-back kind of gameplay that gets intriguing with each passing second and most importantly, the simplicity of the overall game. Let’s take a look at the best games available today that resemble the three-decades-old classic puzzle game, which seemingly never gets old. If you gotten bored with Tetris, here is the list of video games similar to Tetris that are our recommendations. You can play these games like Tetris on mac, PlayStation 4, Xbox 360, Xbox One and even online. 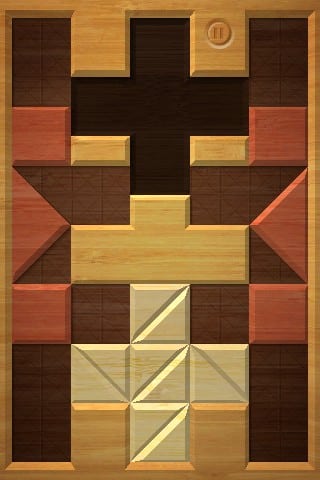 Although the only closest resemblance between ‘Cross Fingers’ and ‘Tetris’ is of them being puzzle games, ‘Cross Fingers’ is a rather slower and distant cousin of the latter. The gameplay (with each level more daunting) consists of a jigsaw-puzzle-like setup wherein the player would be given a void and a set of pieces of the puzzle to fit into the void. As the levels increase, the complexity and the constraints grow, so does the fun. ‘Cross Fingers’ is all about compact spaces, puzzles and using the least amount of resources to accomplish the maximum – basically, fill the voids. 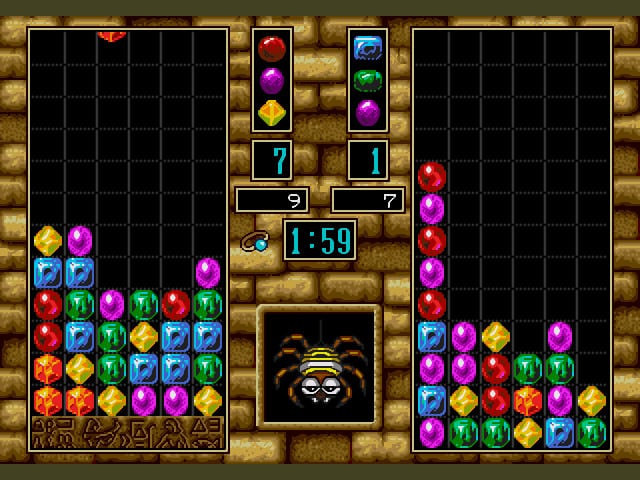 As the name suggests, there’s a column for each player (with a 2-player option as well), in which “jewels” of different shapes and colours befall in a ‘Tetris’-like fashion. The only difference being, instead of up to 4 rows horizontally (as in ‘Tetris’), in ‘Columns’, one can clear the lines from the pile in any direction, given there are at least three matching jewels in a single line. Compared with ‘Tetris’, I find ‘Columns’ way easy and quick to bore, but nevertheless, the possibilities are immense. 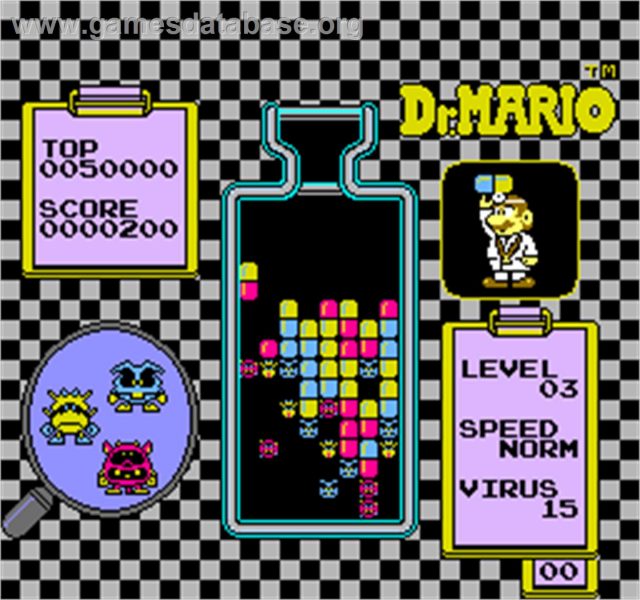 The other kind of Mario, Dr Mario is a Tetris-Mario crossover, wherein a doctor could be seen throwing these coloured pills inside a bottle which has germs and crap, also in assorted colours. The trio of either the pills or a pill combined with a duo of germs calls for a clearance, one cell at a time. One differentiation between ‘Dr Mario’ and ‘Tetris’ being that there’s no upper limit on the number of cells being cleared, provided they are in a single vertical line. A game with a mission, ‘Dr Mario’ is double the fun with Mario playing a different kind of ‘Tetris’ altogether. 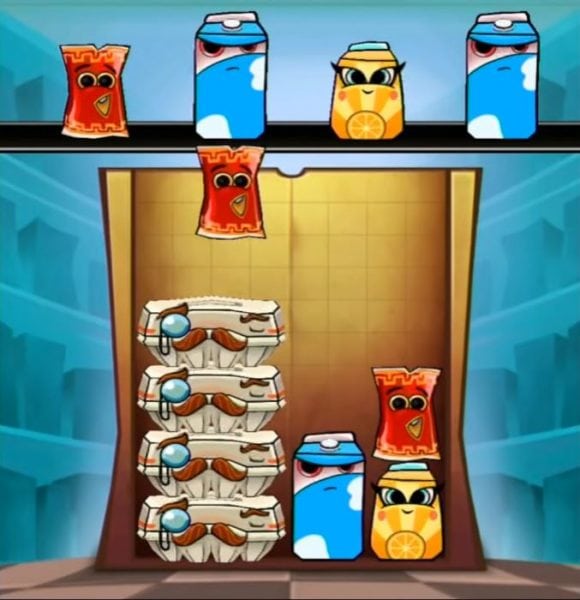 Keeping it real and now moving on to ‘Bag It!’ – it is a game with a difference, with an obvious resemblance to our beloved ‘Tetris’ that is closed spaces and trying to fit “something” in. Except those things are your everyday groceries like eggs, milk, orange juice boxes, watermelons and what not. As a player, all you’re trying to do is to fit in all these groceries in the shopping bag and score based on how much your bag was “full”. Bag It!’ always is and has been full of fun, at least 90% full. Score! 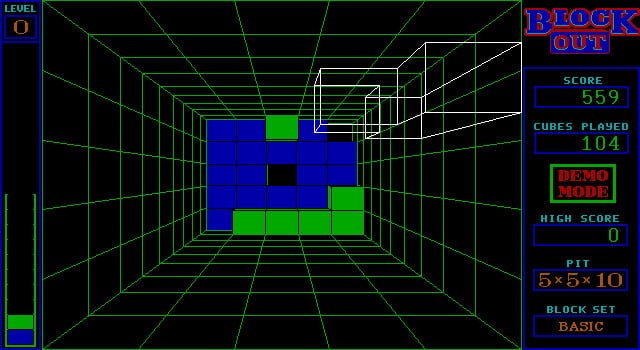 A game with a POV mode of gameplay before POV was cool, ‘Block Out’ is the first person view of how ‘Tetris’ more or less looks like from the top. There, said it, without being sounding dirty. The shapes more or less resemble those in ‘Tetris’ but have a 3D modelling sort of render, wherein you can turn and twist them as you like before you put them down. Also, unlike ‘Tetris’, here you have more than ample time to think through, organize and then arrange your pile. ‘Tetris’ literally viewed from another angle, with a lot more “twists”. 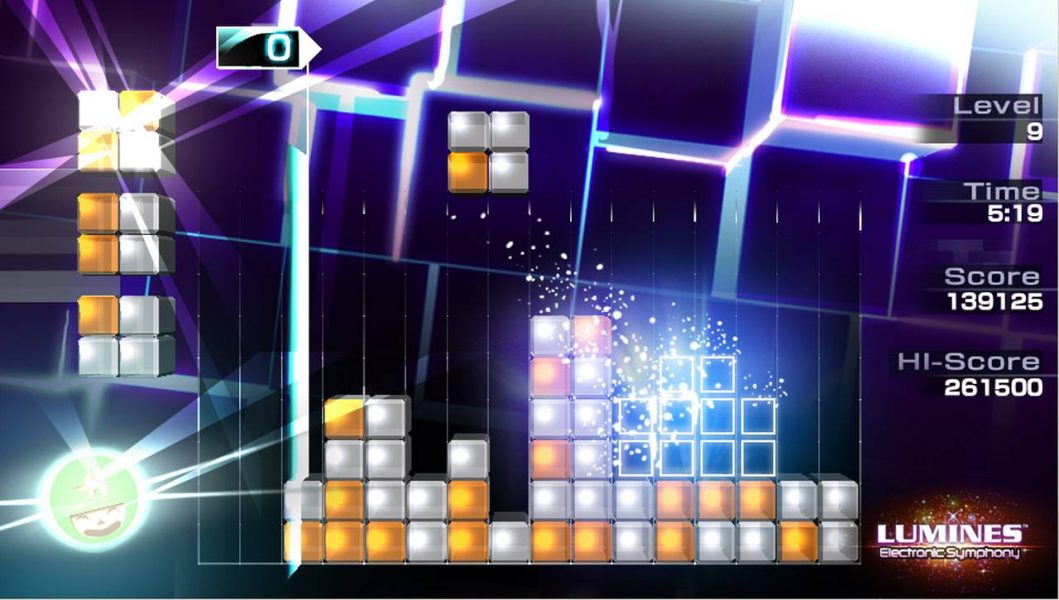 A unique game with a simple premise and a complicated gameplay when one compares it with ‘Tetris’, ‘Lumines’ is extremely fast-paced and has a timeline running across the field every fixed number of seconds. While that goes, the player has to arrange the square blocks with varying colours together to form a uniform box of one colour, which is then swept off by the timeline, and the void is cleared. If the pile touches the brim without a remaining coherent box of a single colour, the game is lost, just like ‘Tetris’. Although ‘Lumines’ may seem a wee bit complicated, the pace gets endearing after a while. 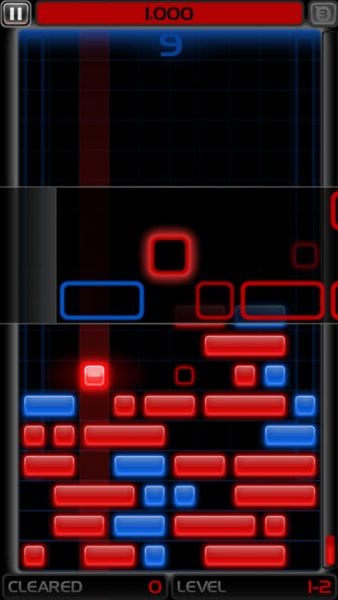 ‘Slydris’ is very similar to ‘Tetris’, only except that there are horizontal pieces of varying widths in two colours, which have to be arranged side by side by the player before making them fall. If the falling pieces form one single line of the same colour, the row gets cleared. The beauty is, you can also adjust the pieces in the pile at the bottom, which hasn’t been seen in any similar game so far. Slow and steady, yet brain-teasing to the core, ‘Slydris’ won’t get you bored. Also, for non-Tetris enthusiasts, ‘Slydris’ won’t be as easy as you think. 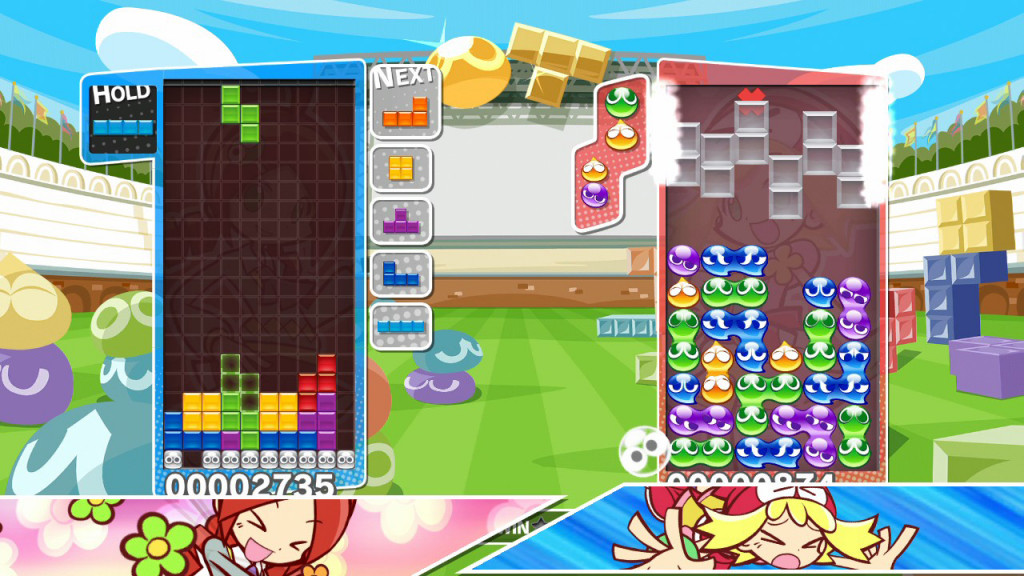 As funny as it sounds, ‘Puyo Puyo Tetris’ is quite similar to Dr Mario, in terms of it being a crossover between the beloved Sonic’s game Puyo Puyo and Tetris. Instead of the geometrical shapes, we see coloured Puyos falling in a random fashion (with many other versions of course) and the gameplay constitutes arranging like-coloured Puyos together in order to form a line or a ‘Tetris’ like geometrical shape and score. The multi-player version is even the more complicated and fun, as each geometrical shape (of the same colour) completed by your opponent would send rogue, colourless Puyos to your pile, thus spelling more trouble for you. Exciting and fulfilling, ‘Puyo Puyo Tetris’ is a must play for ‘Tetris’ lovers. 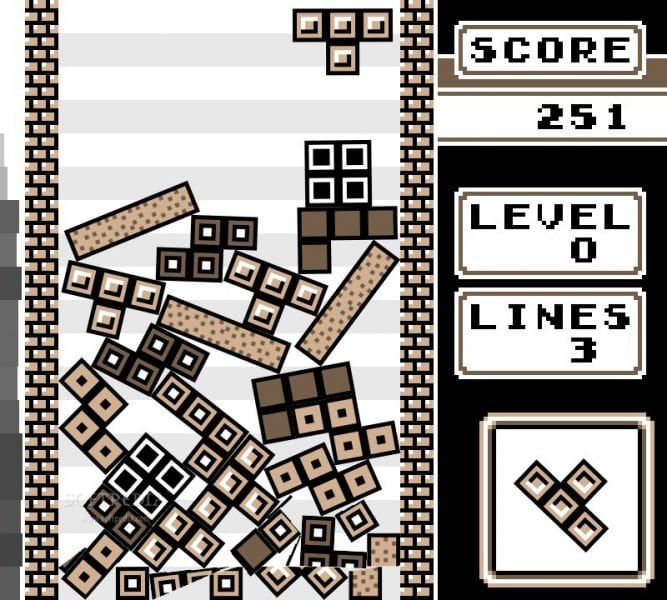 A game that’s registered with a company called “Stabyourself”, ‘Not Tetris 2’ has lines (instead of a grid as in ‘Tetris’) and the blocks/the geometrical shapes are seemingly made out of paper and are lightweight enough to float and fall onto the pile, in a while. The gameplay comprises of carefully aligning them to form a line (mind you, they need not fit together grid-by-grid in order for the row to disappear), and as soon as a line is completely full irrespective of the colour or the grid alignment, it is cleared. The fun part is essentially the balancing act, along with the changing of the geometrical shapes as required. Something that needs loads of attention and eye for detail, ‘Not Tetris 2’ is not for the faint of heart or people with an OCD. 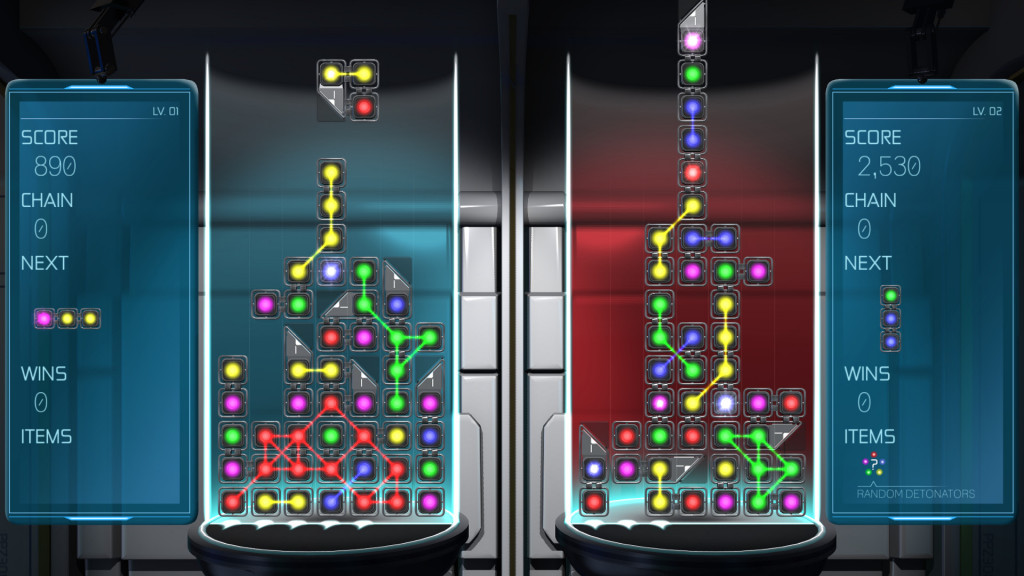 A perfect dream come true for all the ‘Tetris’ enthusiasts, ‘Anode’ has way more options than you can think of and is far more diverse than any game that resembles ‘Tetris’. Apart from the matching blocks which fall into the “bin”, they form a chain-like structure with the adjacent blocks of the same colour. Then there are things like a detonator which explodes, thus decimating the same-coloured chains of blocks or a white detonator that can detonate chains of any colour, a coupler which can combine blocks of different colours to form a chain and cool things like Hover blocks and mass destroyers. A game with too many options and rewards, yet so puzzling and enthralling, ‘Anode’ will definitely “charge” you to the core.