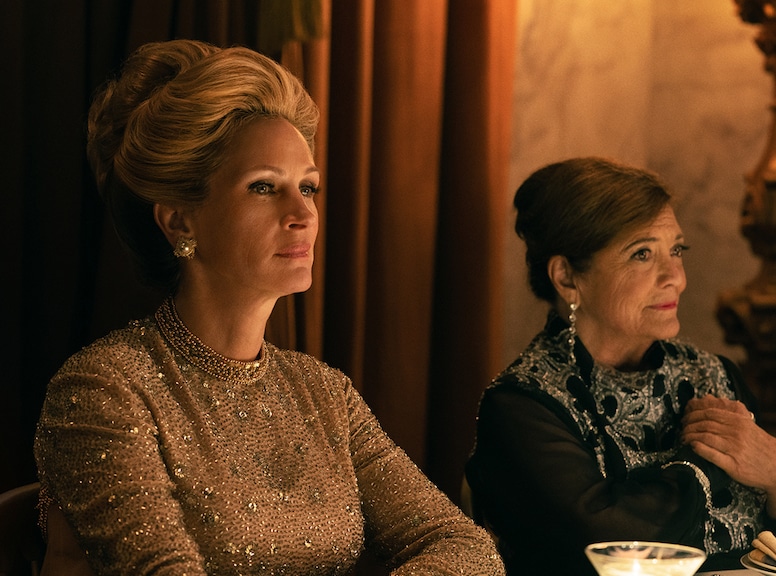 The humor in ‘Gaslit,’ the Starz series about the women whose lives were directly influenced by the Watergate Scandal, is so entuned with the narrative of the story that it perfectly conveys the absurdity and surrealness of the incident itself. In episode 2, titled ‘California,’ the infamous botched burglary takes place.

Meanwhile, John N. Mitchell (Sean Penn) and Martha Mitchell (Julia Roberts) court fellow Conservatives on behalf of Richard Nixon in various fundraisers. After the arrests happen, life inadvertently changes for everyone involved. Some of them just don’t know it yet. Here is everything you need to know about the ending of ‘Gaslit’ episode 2. SPOILERS AHEAD.

The episode begins as Martha gets ready for one of the fundraisers. At the same time in Washington, Frank Wills (Patrick Walker) lands the job as a security guard at the Watergate complex. After making a call, he bumps into G. Gordon Liddy (Shea Whigham). Neither man realizes the role the other will play in shaping their destiny. The burglary team has set up a camp across Virginia Avenue from the complex, at a branch of Howard Johnson’s.

Howard Hunt (J.C. Mackenzie), the co-leader of the group along with Liddy, makes his first appearance, and you can glean why the two of them get along so well. They are both part of the fringes of the Conservative movement and seem to think that it is their God-entrusted duty to ensure that Nixon remains the President of the United States.

In California, John and Martha speak to Michael Deaver, who is an aide to Ronald Reagan, the Governor of California during this period. So, gaining his support for Nixon’s re-election campaign is vital. John and Martha show how good they are as a team as they employ the best of their traits — her depthless charm and his brutish personality — to secure Reagan’s support for Nixon.

On the first night at his new job, Willis ends up making history. For better or worse, this night will define him for the rest of his life and beyond. He finds tapes stuck to the latch of the parking door. He simply removes the tapes the first time and doesn’t pay any more attention. However, after the second time, he finds them at the same spot and then on the sixth floor, he realizes something is definitely wrong and calls the police.

Sergeant Paul Leeper, Officer John Barrett, and Officer Carl Shoffler show up. As they were on vice detail when they got the call, all three of them look like hippies. Al Baldwin, who has been designated the spotting duties by Hunt and Liddy, sees them going into the complex but ignores them. However, when the hippies go up to the same floor as their burglars and draw guns, Baldwin starts shouting, “Mayday.” He, Howard, and Liddy pack things up and flee as other police officers arrive at the complex. Meanwhile, the burglars surrender without any resistance.

Gaslit Episode 2 Ending: Who Are the Watergate Burglars? Why Are John Dean and John Mitchell Worried?

There are five burglars in total — Virgilio Gonzalez, Bernard Barker, Eugenio Martínez, Frank Sturgis, and James McCord. The first four of them have Cuban ties of various degrees, and they collectively seem to believe that they need Nixon to be re-elected to remove Fidel Castro from power. And that’s why they have agreed to spy on the DNC. They were selected for the job because they can’t be traced back to the re-election campaign. But the fifth person, McCord, has worked at the Mitchell home as part of their security routine. And if this link is discovered, it can prove disastrous for the campaign.

The fundraisers are just excuses. John has brought his family to California so he can claim that he wasn’t in Washington when the break-in happened. Dean is in the Philippines for the same reason. But with McCord’s arrest, things can potentially be traced back to them. So, they agree to return to Washington and regroup. In the final scene of the episode, Liddy and Howard burn evidence.

Why Does John Leave Martha Behind?

The following morning, Martha wakes up to find that John has gone back to Washington, leaving her behind with Peter, a relatively new member of their security detail. When Martha tries to call her husband, Peter physically accosts her, before sending her back to her room. It seems John Mitchell is afraid of his wife’s potential reaction to McCord’s arrest. She has many friends in the press and might reach out to one of them and reveal McCord’s connection with her family. So, John apparently thinks that it will be better to keep his wife isolated. This entire sequence is a dramatized reinterpretation of the beginning of real Marth Mitchell’s alleged kidnapping.