Titled ‘It’s Not Illegal,’ season 2 episode 8 of ‘Gentleman Jack‘ gives a fitting conclusion to the sophomore outing of the historical drama TV series. The finale sees Anne Lister and Ann Walker’s marital conflicts boiling over during their London trip, thus causing them to doubt their devotion to one another. Meanwhile, the latter’s brother-in-law, Captain Sutherland, decides to make things worse for her by refusing to go ahead with the estate division.

Things are not so great in the Lister household either, as Marian announces her future plans, further worrying her elder sister. Do Anne Lister and Ann Walker manage to tackle all these troubles and save their marriage? Let’s find out more on this and the highly anticipated ending of the ‘Gentleman Jack’ season 2 finale! SPOILERS AHEAD.

In ‘It’s Not Illegal,’ Anne Lister and Ann Walker visit London to find a new teacher for the latter’s Sunday school as well as run a couple more errands. The former then goes to see some of her aristocratic friends for dinner but refuses to take her wife along, as she feels that London society may overwhelm her at the moment. Anne asks her influential friends over dinner to help import a giant model of the Alps, which she had purchased during her honeymoon.

Elsewhere, Captain Sutherland sets out for Halifax with Elizabeth, planning to end Ann’s desire to divide the estate. Before leaving, he shares with his mother his suspicions about Anne’s control over his sister-in-law and the nature of the women’s relationship. Not just that, he hints at intending to use his doubts as a means to stop the estate division and convince Ann to return to Scotland with him and Elizabeth. On the other hand, while returning from London, Anne takes her wife to a church she visited with Mariana. The building houses a monument for Penelope Boothby, a five-year-old girl who died three weeks before Anne was born.

Anne tells her wife that she holds the place dear and unexpectedly reveals her vulnerable side by lamenting how she can never give Ann the child she desires. Furthermore, she states that Penelope symbolizes that very child they will never have, as well as how she feels out of place amidst her sister and father. Despite this emotional moment, tensions continue brewing between the couple. Anne tries to pacify Ann by requesting her to give the inaugural speech at the foundation laying ceremony for the Northgate casino.

Regardless of the conflict with her wife, Ann is honored and begins preparing for the ceremony. While Anne looks forward to her dream project finally getting kickstarted, Marian shockingly informs her of her plans to move to their Market Weighton home with their father. Not just that, she confesses that Mr. Abbott broke off his engagement with her due to the controversial newspaper advertisement about Anne and Ann. Thus, she feels apprehensive about attending the ceremony, fearing that people would be hostile toward the family.

In addition, Anne’s father agrees with Marian’s decision and shows his discontent over his elder daughter’s plans. Dejected, she still proceeds with the ceremony with her aunt’s blessing, and Ann delivers a wonderful speech to the townsfolk. Afterward, Anne receives the heartbreaking news of Isabella Norcliffe’s mother passing away due to a heart stroke and feels deeply pained due to her proximity to their family.

Upon finding out that the deeds of the Walkers’ Crow Nest estate are with Anne at Shibden Hall, Captain Sutherland is determined that she is manipulating Ann into dividing the estate. Hence, he arrives in Halifax with Elizabeth and his son Sackville to convince his sister-in-law to take back her decision. Initially, Captain Sutherland tries to coax Ann by telling her that she is still unwell and that it shall be better if she returns to Scotland to live in their care. He also implies that Anne may be influencing her to ask for her share of the estate, but she vehemently denies his claims and insists on going ahead with the division.

In retaliation, Captain Sutherland approaches Mr. Gray, Ann’s lawyer in York, and accuses Anne of having an “unnatural hold” over Ann. He tries to tarnish her reputation by citing the case of a Scottish lady who accused two women of having a forbidden sexual relationship. Mr. Gray then responds by saying that the said women sued the lady for defamation and that their relationship is not illegal. Thus, if Anne does have such a relationship with Ann, it still entitles the latter to her right in the family estate. Seeing that Mr. Gray is not in his favor, Captain Sutherland then meets Mr. Parker and again badmouths Anne by calling her a predator of Ann’s fortune.

When Mr. Parker defends his client as well, Captain Sutherland reveals that Ann had tried to take her life in Scotland earlier. Using this information, he convinces him to hand him the Crow Nest deeds that Ann had given Mr. Parker for safekeeping. He also sends Mr. Gray’s representative Mr. Watson back to York without signing the deed on the pretext that Ann has left out one of his properties from the listed ones. At the Northgate casino’s inauguration, Samuel Washington informs her and Anne about Captain Sutherland’s conspiracy. Both women get worried about his next step and invite him and Elizabeth over for tea. 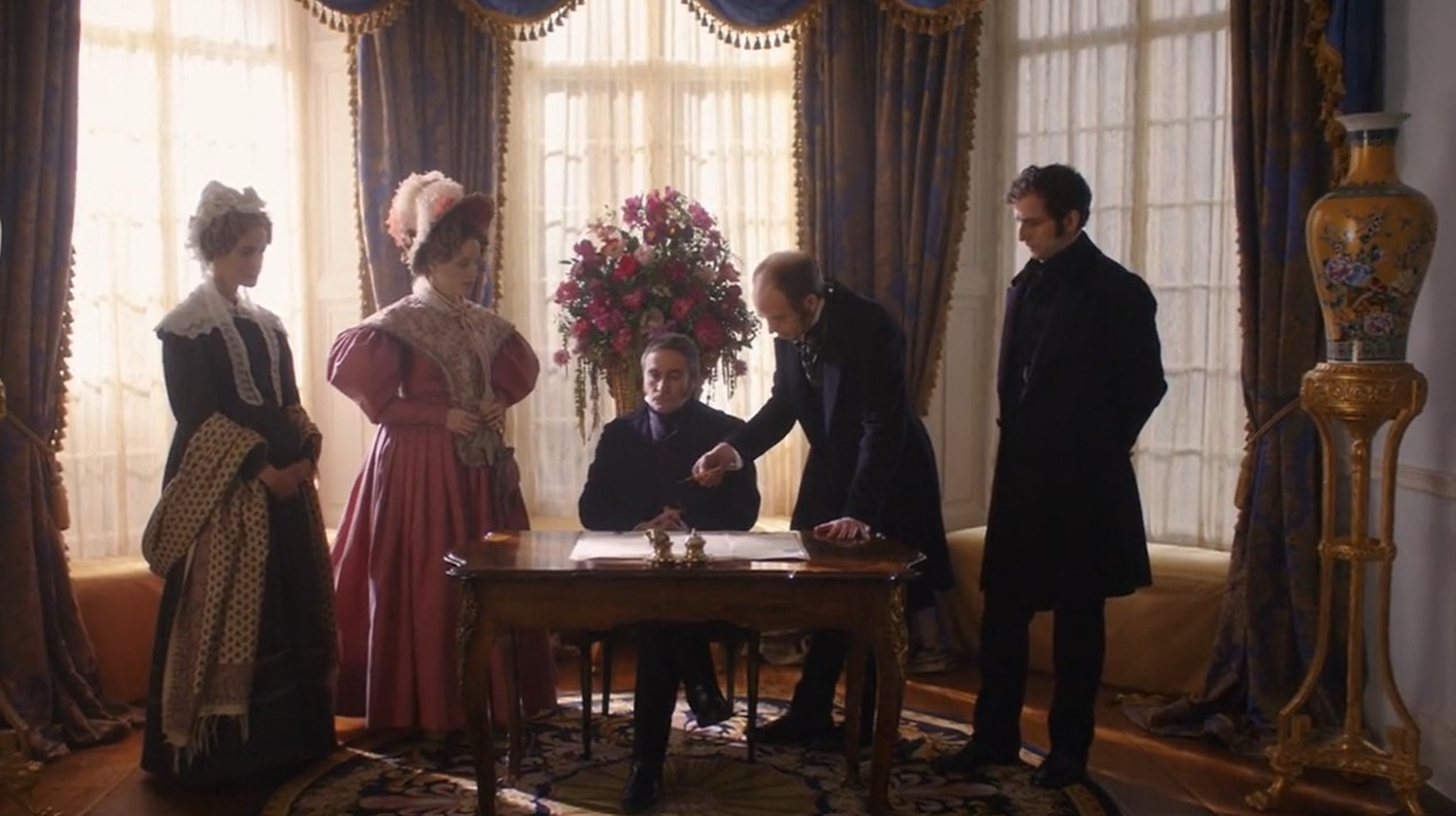 When Captain Sutherland arrives at Shibden Hall, he tells Ann that Mr. Gray and Mr. Parker have agreed that she shouldn’t divide the estate. But Anne cleverly traps him by announcing that Mr. Gray has arrived to discuss matters, and Elizabeth finally comes forward and confesses her husband’s misdoings. She clarifies that neither man had said any such thing and implores Captain Sutherland to give Ann her rightful share in the Walker estate.

Anne then reveals that the “Mr. Gray” she mentioned is actually the landscaper she hired to renovate Shibden Hall and not Ann’s lawyer as she had indicated. Defeated and caught in his own lies, Captain Sutherland reluctantly signs the deed and transfers half the properties to his sister-in-law.

Do Anne Lister and Ann Walker Remain Together?

When Anne does not let Ann accompany her to her social gatherings in London, she expresses her hurt over not being involved with her wife’s friends and angrily states that the former only approaches her in need of money. Moreover, she questions Anne’s visit to Mariana Lawton and her rising debts. Given her family’s previous nagging, Ann further states that she still has doubts over how right their relationship is and that despite being termed marriage, she gets treated as the lesser half. She then painfully declares that it is better that they part soon, to cause lesser agony for everyone.

Though devastated at her wife’s words, Anne decides to give her some space to sort out their differences. She also helps Ann in all her capacity to help secure her share of her family estate from Captain Sutherland. This renews their faith in each other, and Ann decides to reconcile with Anne, apologizing for even doubting her intentions in the first place. She even suggests visiting Mr. Gray in the coming week to alter their wills and give one another a life interest in their estates, as they always intended. Anne, in return, tells her that they must stand united through all the world throws at them, as they are the only ones who wish to see themselves together.

Read More: Where Was Ann Walker Buried? Where is Her Estate Now?