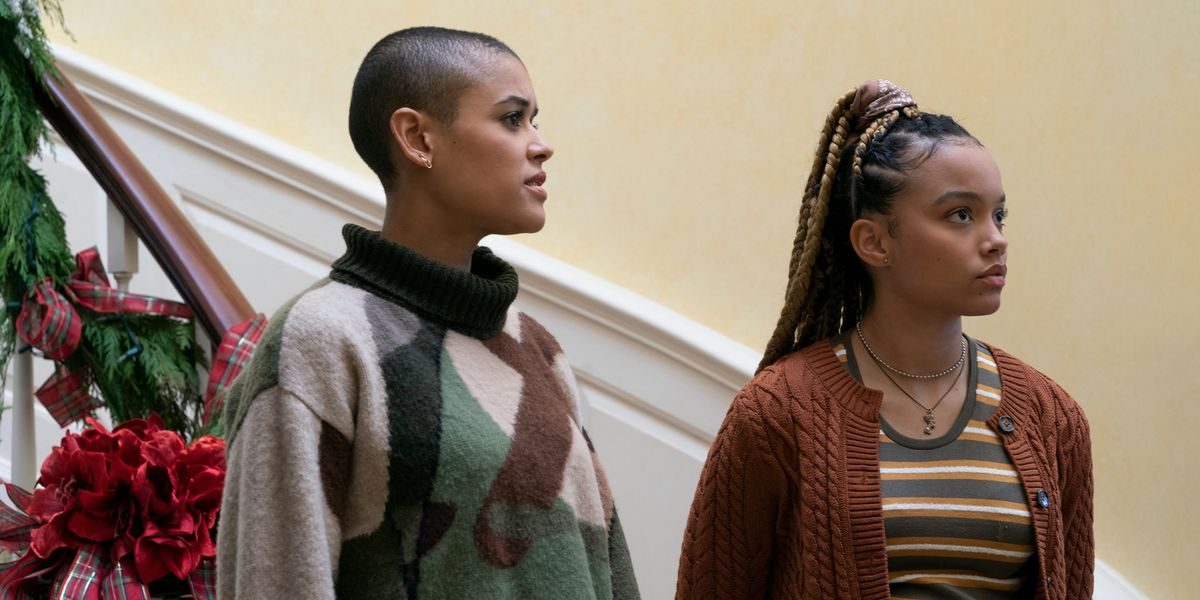 ‘Gossip Girl‘ reboot crafts a compelling and interconnected tale of privilege and accountability through the eyes of students at the Constance Billard St. Jude’s School in New York City. As the show’s freshman season races towards the finish line, Julien, Zoya, and their friends continue to experience turmoil in their lives due to the presence of Gossip Girl.

In the finale, Julien tries to win over Obie while figuring out her life after getting a reality check from everyone around her. The friends gather for a New Year’s party but must make decisions that will change the trajectory of their lives. The season finale ends on a shocking note that signals worse things for the group in the future. Here’s a breakdown of the events and ending of ‘Gossip Girl’ episode 12! SPOILERS AHEAD!

‘Gossip Girl’ season 1 finale is titled ‘Gossip Gone, Girl.’ It opens in the aftermath of Kate, Jordan, and Wendy posting every tip Gossip Girl has received along with the name of the person who shared it. Since then, the activity on Gossip Girls’ page has simmered down, and Kate feels it is a good thing the teenagers are dealing with stuff on their own. Zoya, Julien, and Nick look at their new apartment in Queens as the Lotts’ financial condition mean the family will have to make some lifestyle changes.

Zoya wants to hang out with her friend Shan for New Year’s Eve, but Julien convinces Zoya to join her at their usual party in Hudson at Aki’s dad’s house. Audrey learns that Max is going through a rough time after his parents’ divorce, and she and Aki convince him to go to Hudson with them. Monet and Luna advise Julien to get back together with Obie so she can once again be in the spotlight. However, when Julien tries to mend things with Obie, she learns that Obie is dating Grace, the daughter of a politician. Monet and Luna suggest to Julien that she invite Grace and Obie so that they can break them off.

Soon the gang arrives at the luxurious house. Max is completely detached and uninterested in being there, while Zoya feels like she made the wrong choice by not joining Shan. Julien begins her plan of outshining Grace and patching things with Obie, but every move fails. Luna finds out that Grace is a mean drunk, and they plan on getting her drunk to expose her mean side. In the end, Julien’s plan backfires and leaves a bad impression on Zoya and Obie. Likewise, Aki and Audrey’s plan of convincing Max to join them also falters.

Gossip Girl Season 1 Ending: Is Gossip Girl Back? What Are Her New Rules?

In the episode’s final act, Julien realizes that Obie no longer wants to be with her. Moreover, she receives an earful from Zoya about her actions towards Grace. Julien decides to own up to her mistakes and helps Obie patch things up with Grace. She also arranges for Shan to pick Zoya up. It seems like Julien is finally changing and making amends for real. However, viewers are forced to hold that thought in the final moments of the episode.

Julien messages Gossip Girl about a potential team-up and explains her new set of rules that will wreak more havoc in the lives of the Upper East Siders. Kate sees the message and immediately agrees to the alliance. So it appears that Julien and Kate will be heading Gossip Girl in the future. According to Julien’s new rules, the information Gossip Girl will share will not all be true, and the intention seems to be to pit people against each other by forcing them to question the trust between them. In the end, Gossip Girl makes a post announcing her return, so the team-up is on!

Moreover, the alliance between Julien and Kate is power and privilege joining hands with a force of judgment and reason. Therefore, it won’t all be smooth sailing for Gossip Girl either. Kate also has one secret condition for their alliance, and it remains to be seen how it will affect the dynamic between Kate and Julien. Of course, Julien is unaware of Gossip Girl’s identity, and that itself could lead to a domino effect on the lives of everyone remotely connected to Gossip Girl. As things stand, Julien will be feeding Kate with dirty secrets and that won’t end well for anyone.

After spending much of the season trying to find the thing missing from their relationship, Aki and Audrey realize that the thing is Max. In the finale, the couple attempts to convince Max into partnering with them, and despite their best intentions, Max has his apprehensions. After seeing the divorce of his parents, Max is cynical about relationships. Max turns down Aki and Audrey’s first proposal of sharing time with each other as if he were some sort of an object. Moreover, because Aki and Audrey have been together for so long, if their three-way relationship does not work out, Max will feel like he is the expendable one.

The couple sees Max’s point and decides to come up with a better solution. In the end, they make another proposal to Max. Aki and Audrey suggest the three of them date each other equally, and if things do not work out, they will break up. Thus, Audrey and Aki put their existing relationship on the line to form a new one with Max. For a moment, Aki and Audrey feel as if Max has turned down the second proposal too. However, Max surprisingly accepts the proposal, thus marking the start of a new relationship which is unconventional, to say the least.

Read More: What Are the Sexualities of Gossip Girl Characters?